A 10-year-old girl born with no hands is this year's winner of a national handwriting competition.

Sara Hinesley, a third-grade student in Maryland, won the Nicholas Maxim Award in the 2019 Zaner-Bloser National Handwriting Contest. To be eligible for the Nicholas Maxim Award, a student must have a cognitive delay, or an intellectual, physical or developmental disability. A team of occupational therapists judged all of this year's entries.

"I felt excited and proud," Sara told "Good Morning America" about learning she won the award, which comes with a trophy and $500 in prize money as well as $500 in educational materials for her school. 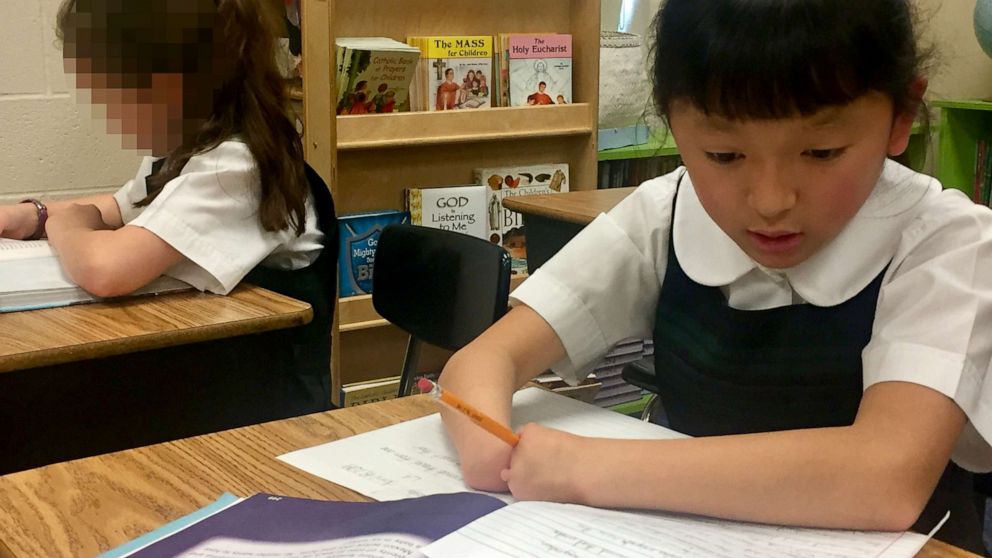 Sara writes by gripping the pencil or pen with both of her arms. She loves to create art and sees writing cursive -- for which she won the award -- as an extension of art.

"Cursive is round and it's trying to connect [letters] so it’s art," she said.

Sara was born in China and adopted by the Hinesley family in the U.S. four years ago, at age six. She could only speak and write Mandarin when she arrived in the U.S., but quickly picked up English from her older sister, Veronica. 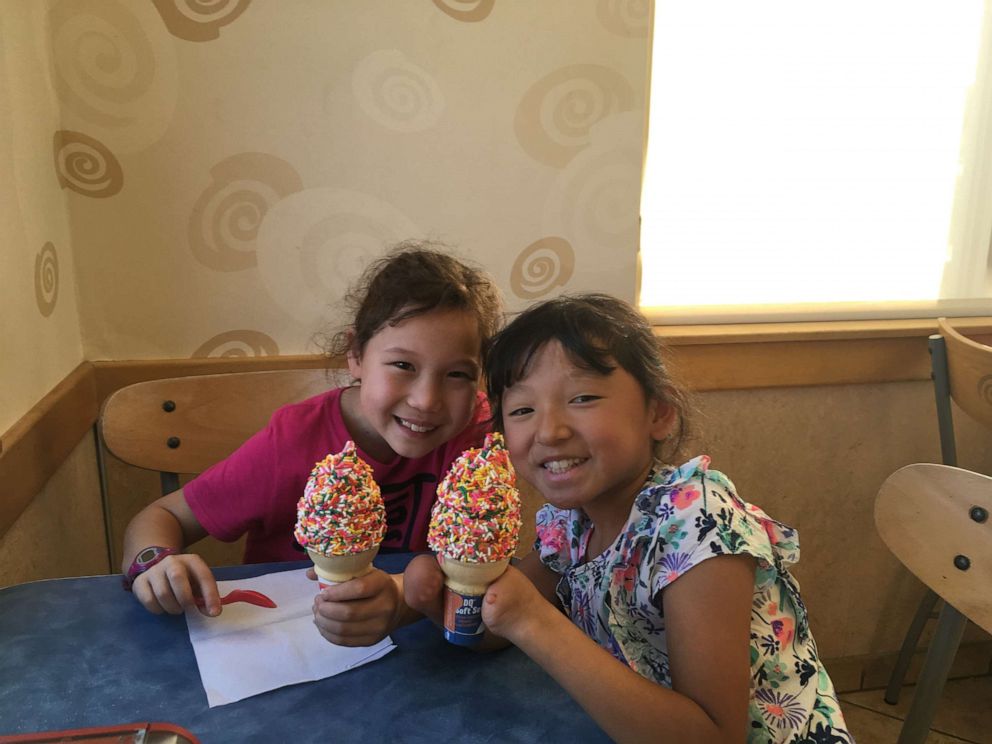 She figured out a method of writing on her own.

"Sara is very motivated and a disciplined student," said the girls' mother, Cathryn Hinesley. "She excels really at about anything she tries."

The third-grader has made the decision not to use prosthetic hands, according to Hinesley.

"All of her life she has figured out ways to overcome that challenge and it's really made her a very strategic thinker," Hinesley said. "Before she takes on a task she tends to plot out how she’s going to accomplish it and is usually successful." 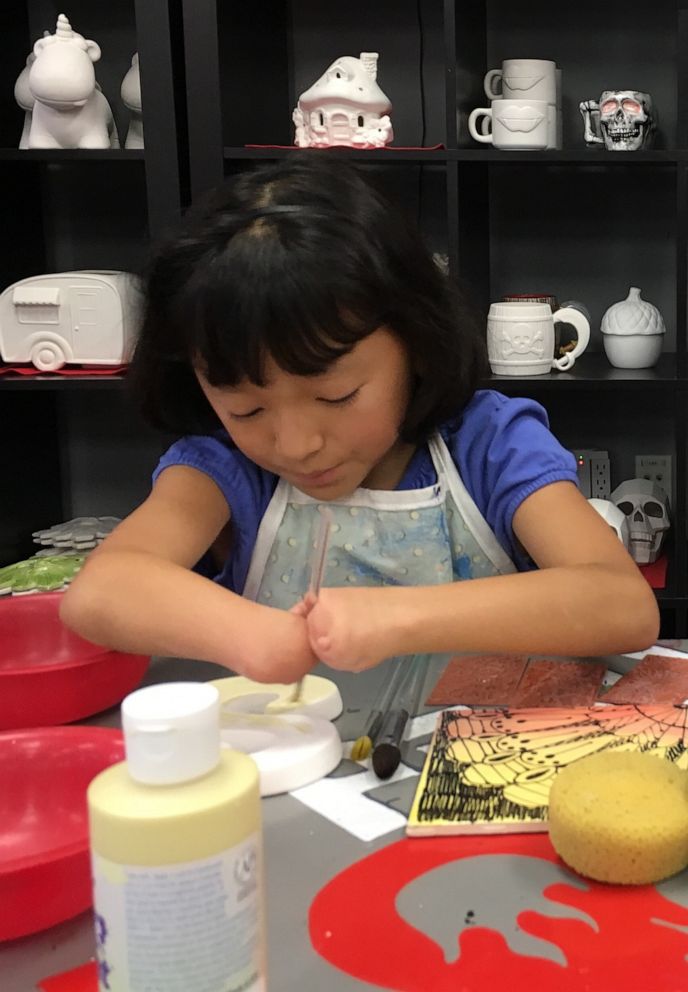 She added, "Everything Sara does she really does to the best of her ability and on her own. She's a very independent, 'I can do it,' type of kid."

Sara will receive the award on June 13, the last school day of the year at her school, St. John’s Regional Catholic School in Frederick, Maryland. Sara is the first student from the school to win the Nicholas Maxim Award. 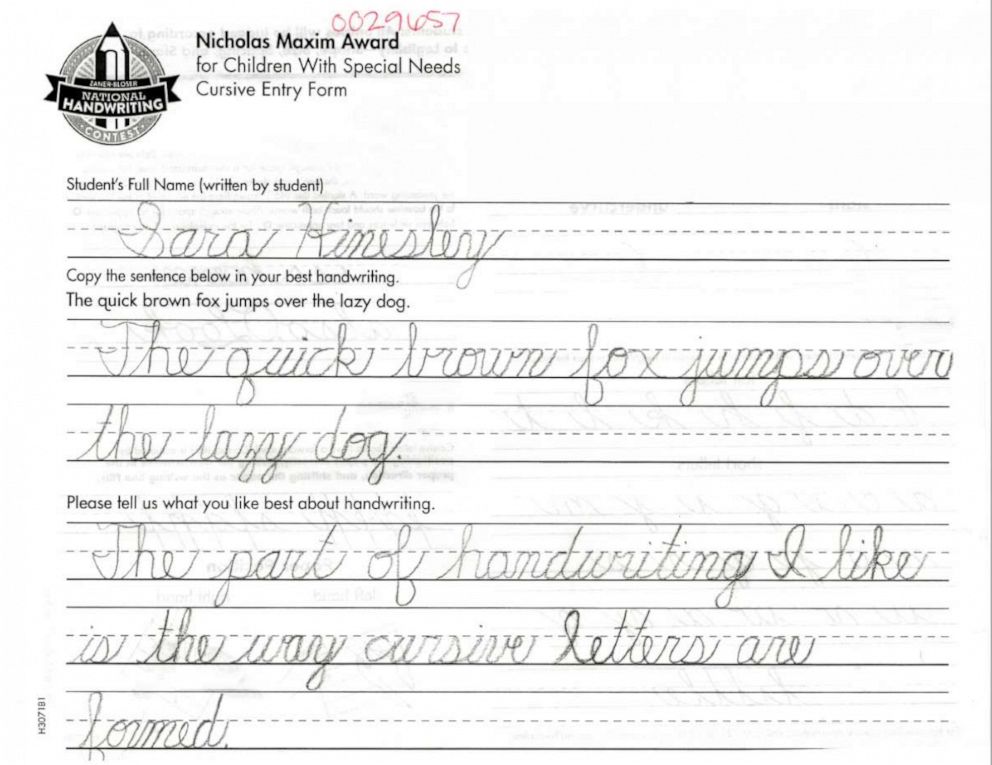 "Sara always has a smile on her face. Nothing gets her down at all," said the school's principal, Karen Smith. "She always seems to cope with whatever task is given. She always figures out a way to do it."

(MORE: After being in foster care, graduating senior shares advice on perseverance: 'Someone out there thinks you're strong, beautiful, wonderful and successful')

Sara's mom called her daughter's award-winning penmanship a "testament to the human spirit."

"It shows what perseverance and a positive attitude can do," Hinesley said. "Sara is a great example of that."