A Florida teen has beaten the odds to walk at her high school graduation, just one month after a car accident left her with a traumatic brain injury, a mobility disorder, speech impairment, and post-traumatic stress disorder, among other injuries.

On the evening of April 18, Khalia Carter of Fort Myers, Florida, told "Good Morning America" she was driving home, having spent the day with her best friend, running errands, playing golf, and getting matching tattoos. 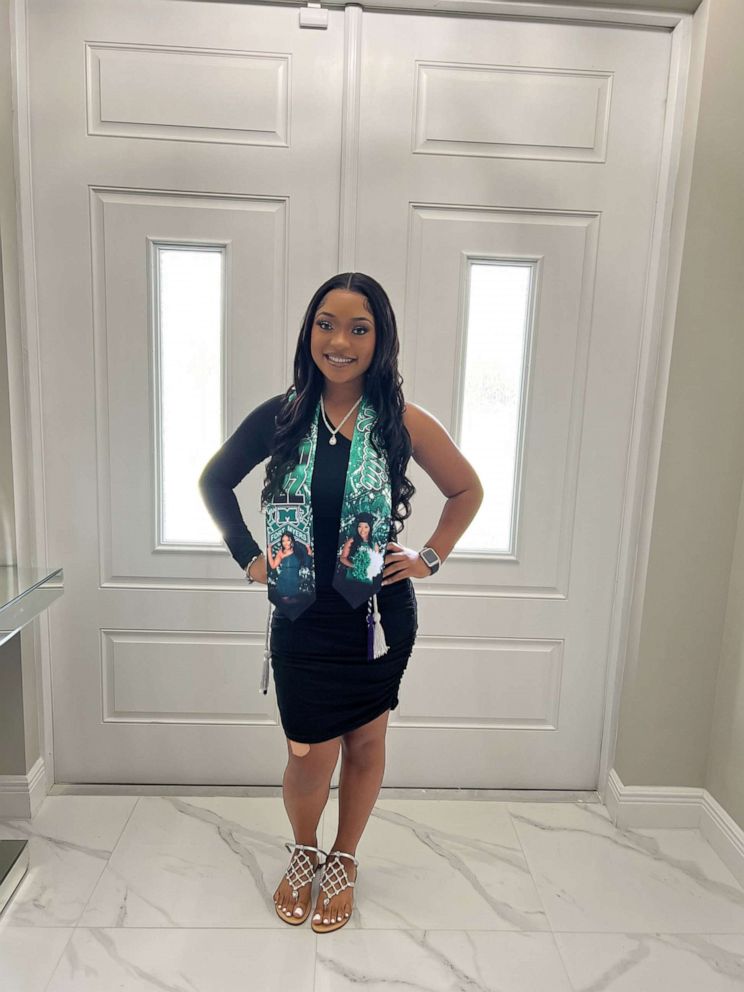 Courtesy Shawnda Cook
Khalia Carter who survived a car accident in April but despite the odds, was able to walk at her high school graduation in Fort Myers, May 21, 2022. Carter told "GMA" she had a good high school experience. For the 2021-2022 school year, Carter said she led her school's varsity cheer squad as captain.

Carter's mother, Shawnda Cook, received a phone call from a stranger at the scene who told her her daughter was in an accident and that she needed to go to the scene immediately. Carter had only been about five minutes away from home but Cook told "GMA" because EMS, the fire and police departments had all rushed to the scene as well, it took her closer to 30 minutes before she finally saw her daughter.

"As she was driving home, a motorcycle ran into the back of her. It was a pretty hard impact," Cook told "GMA." "But she ended up, car escalating down the road, like at about 90 miles an hour, and then going into a ditch. Later, she was transported by ambulance to a hospital. And we later found out that the driver of the motorcycle was a drunk driver. His blood alcohol levels [were] three times over the alcohol limit."

Carter said she remembers what happened on that fateful day and has struggled with anxiety since the crash.

"Some days [are] very hard and some days, I just get emotional and I'm not even an emotional person," she said. "This journey has been a lot and dealing with a brain injury is probably one of the worst things you can go through [because] your brain is really sensitive."

But despite all the mental and physical challenges, Carter has been able to focus on getting better with the help of her family, doctors and a mix of intensive therapies -- from occupational and physical therapy to speech therapy.

"From what I know and what everybody else has told me, Khalia has been so positive and so determined from the beginning," her mother said. "Because she set her goals every day, that she has to achieve different things every day, that helped speed up the process for her."

Carter, who had been a captain of her varsity cheer squad, said she had one special goal in mind after the car accident: to walk at her upcoming high school graduation. 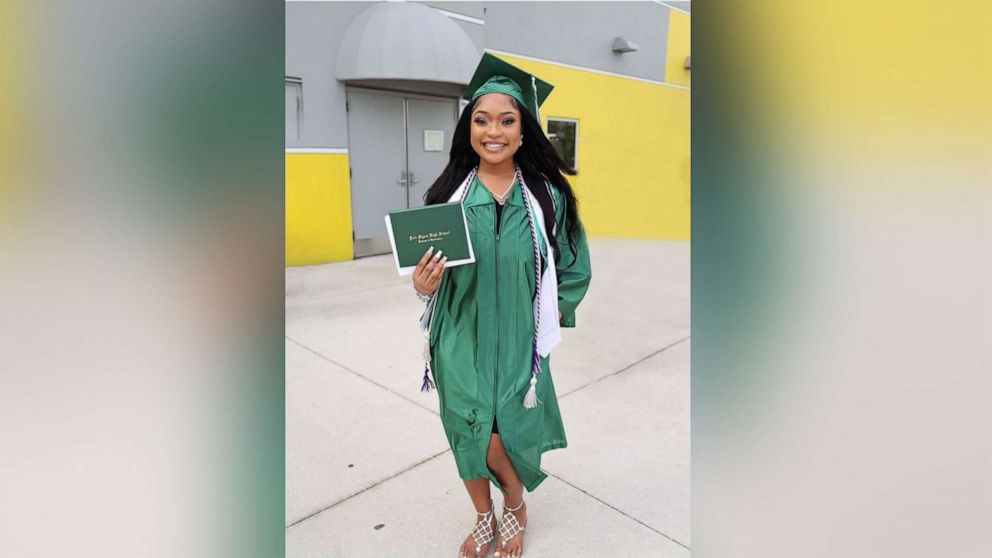 Courtesy Shawnda Cook
Khalia Carter, 18, was injured in a car accident in April and was initially unable to walk. But with the help of intensive therapy, she was able to recover enough to walk at her high school graduation the following month.

"I was determined. Nobody was going to stop me from doing that," Carter told "GMA." "I knew, as soon as it happened, I told my mom in the hospital that I'm still going to go to graduation."

"After I was getting stronger every day, I decided, maybe it'd be surprising if I shocked everybody and walked across the stage and why not? So I pushed every day as hard as I can and gave 110% every day at therapy, to try to be able to walk across the stage." 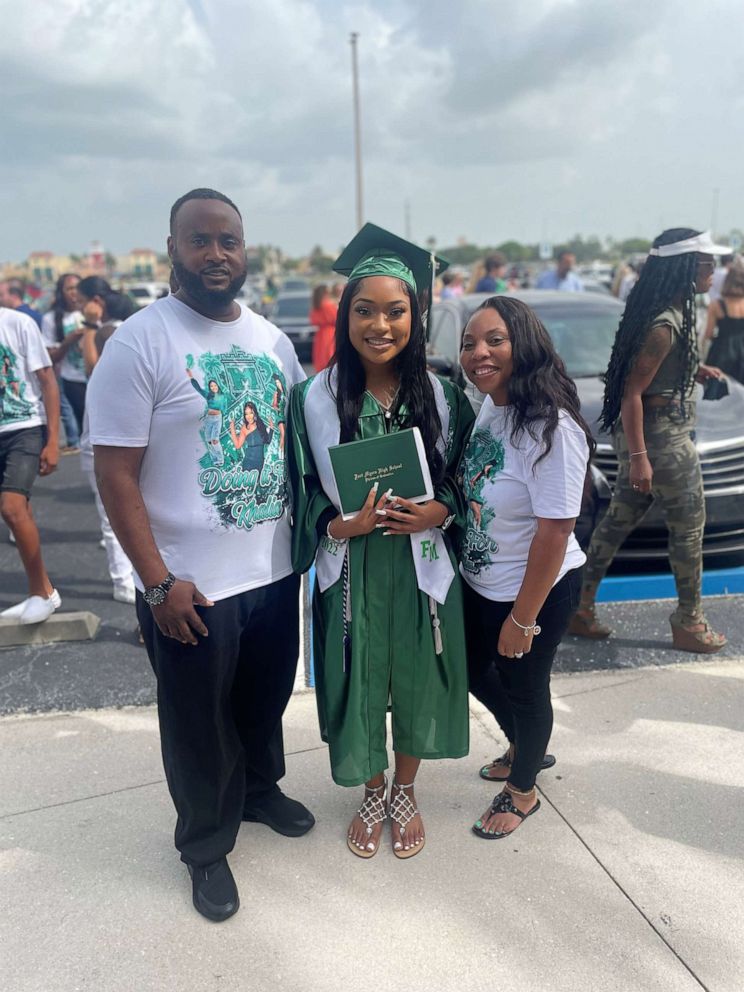 Courtesy Shawnda Cook
Khalia Carter poses with her parents, Reginald and Shawnda Cook at her graduation from Fort Myers High School, which was held at Hertz Arena in Fort Myers, Fla., May 21, 2022.

On May 21, a little over four weeks after the crash, Carter joined the rest of Fort Myers High School's class of 2022 at Hertz Arena to celebrate their accomplishments and receive her diploma.

"This was such a huge milestone. Khalia had so many odds against her." her mother said. "It's hard [for her] to be in a big crowded environment and so for her to take the initiative to go and be around such a large crowd was huge for her. So to see her take the initiative to do it and walk across that stage by herself? It was amazing." 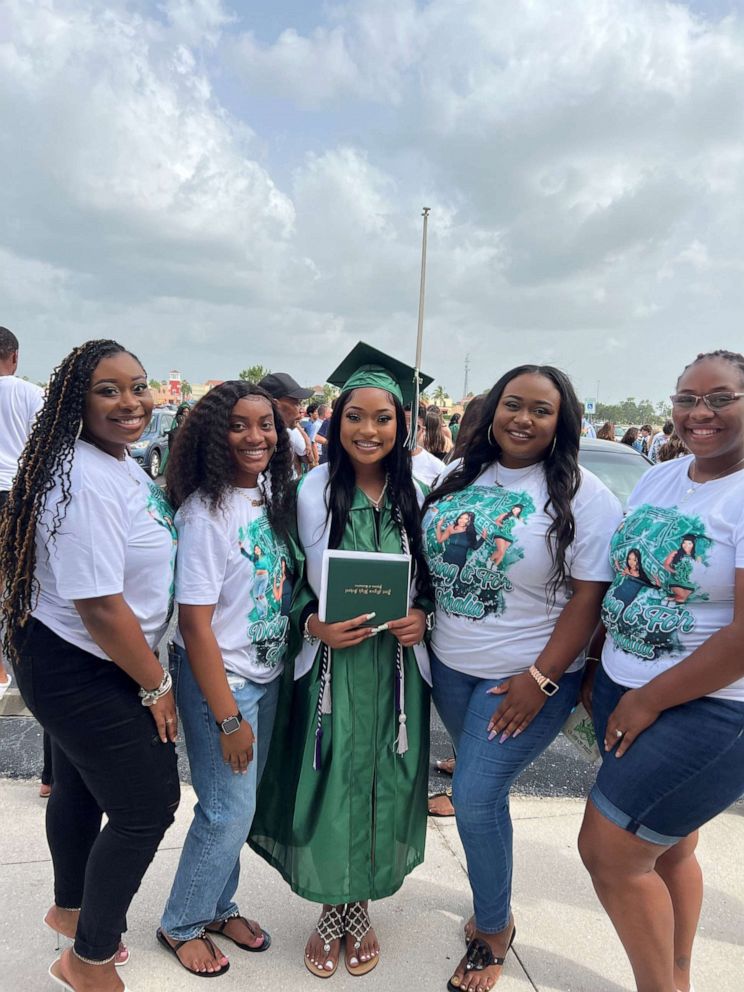 Courtesy Shawnda Cook
Khalia Carter poses with her four sisters, who all went to support her at her May graduation from Fort Myers High School, which was held at Hertz Arena in Fort Myers, Fla., May 21, 2022.

Cook said her second to youngest daughter went from being unable to walk initially after the accident to using a wheelchair and then a walker, before finally regaining her ability to walk independently. 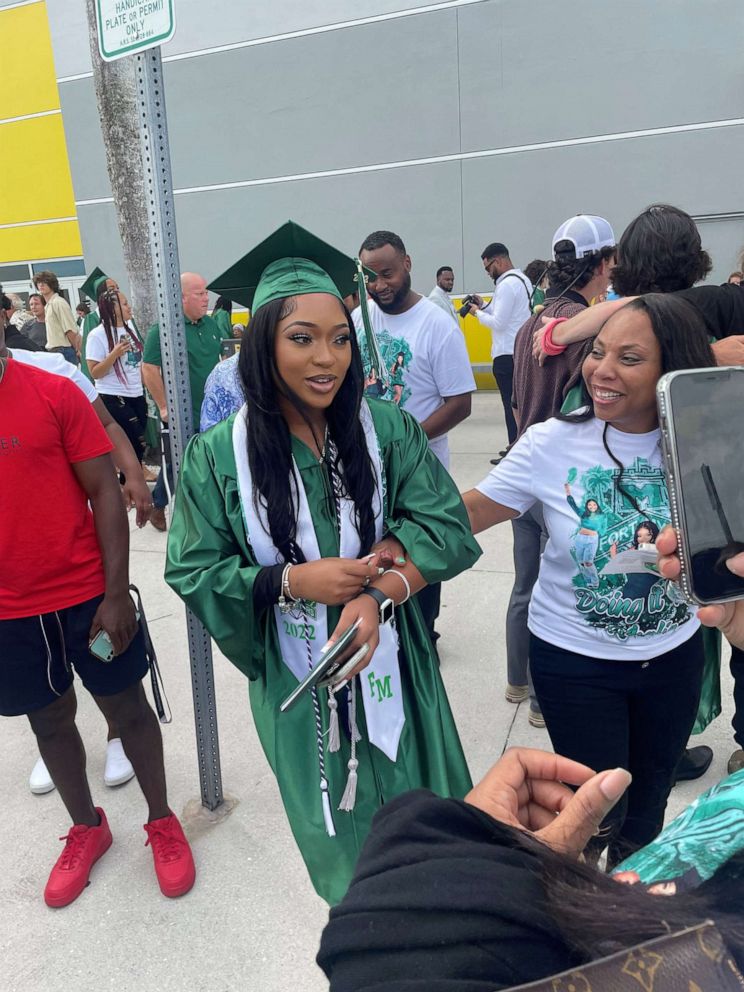 Courtesy Shawnda Cook
Khalia Carter who survived a car accident in April but despite the odds, was able to walk at her high school graduation in Fort Myers, Fla., May 21, 2022. Carter hopes to attend Georgia Southern University in the fall and study journalism or education.

Carter says she plans to keep the momentum going and continue with her therapy sessions. For her next goal, the 18-year-old hopes to get well enough to attend Georgia Southern University in the fall, where she plans on studying either journalism or education.

"I don't want to change my mind because I know that it's always been a dream so I'm going to try to stick to it and try to make it happen," she said.