A 27-year-old New York man can walk less than two years after being paralyzed when he was hit by a car while on a bicycle.

Cory Moses, of Brooklyn, was on his way to meet his then-partner on Oct. 25, 2020, when he said someone in a parked car opened a car door into him, sending him flying into the street, where he was hit by another car.

As a result of the crash, Moses, who had just celebrated his 25th birthday, suffered six fractured ribs, two broken arms and a fractured spine, which caused paralysis.

"I remember not wanting to look down. I thought my lower half had been severed," Moses, who said he eventually looked down at his legs after a bystander told him he was not bleeding, told "Good Morning America." "The lower half of my body was at a weird angle and I definitely knew something was wrong."

"I felt the feeling drain from my legs," he said.

Moses said he underwent three surgeries and spent two weeks in the intensive care unit. Before his first surgery, Moses said he was told he may never walk again.

"My first surgeon said she’d stabilize my spine as much as she could but from the damage I probably wouldn’t be able to walk or move my legs again," he said. "They added two rods and eight screws to my back to stabilize it, which took about 12 to 13 hours in total because of how severe the damage was."

After the surgery, Moses said he was not able to move his left leg at all but could very slightly move his right leg, which gave him and his medical team hope. 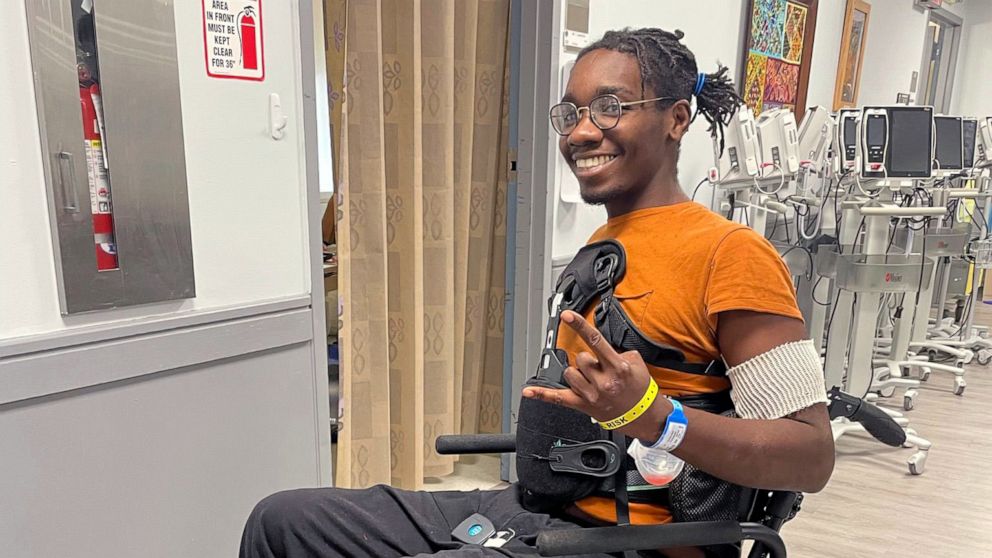 "[The surgeon] said that with that, there was still some connection," Moses said. "They couldn't tell me how much of a recovery I'd make, but I'd get something back."

After his first three surgeries, Moses was transferred to The Mount Sinai Hospital, where he underwent two more surgeries and spent nearly three months recovering.

Moses said he realized how severe and life-changing his injuries would be, but he remained determined to overcome them.

"Within my first week or so at Mount Sinai is when I got myself into a place of peace and an understanding that if I’m going to get out of the hospital and into rehab that my mind and my focus has to be there. I can't lose that to my feelings or depression," he said.

Moses, who was working as a contractor for a construction business at the time of his injury, took on his rehabilitation work as a full-time job. He learned how to navigate life in a wheelchair, while also practicing on an exoskeleton program, which is a machine that helps patients with spinal cord injuries relearn how to walk.

MORE: Paralyzed woman completes NYC Marathon on crutches for others 'who aren't able to take steps'

"I put a lot of work into making my recovery fun," he said. "I never wanted it to feel like a chore."

Even after Moses was discharged in January 2021, three months after his accident, he went back to the hospital several days a week for physical therapy, according to Dr. Liz Pike, physical therapist with the Department of Rehabilitation and Human Performance at The Mount Sinai Hospital.

"It takes a lot of time for the body to heal just from a neurological injury and he put in the work and really listened to his body and did all the steps and kind of built the foundation blocks to get to the bigger movements, like walking and balancing," said Pike. "He took his off time to work on strengthening and stretching and just being healthy in general, like eating well." 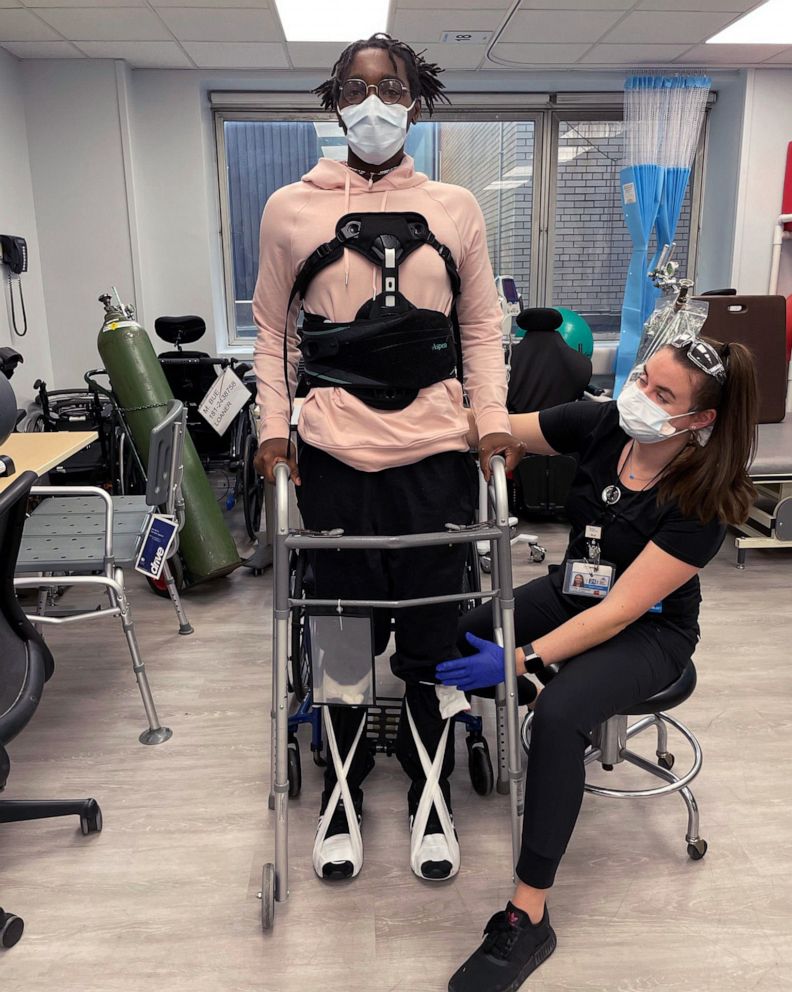 Moses set a goal for himself to be able to walk before the one-year anniversary of the crash. He reached that goal last October, taking his first steps on his own in his apartment.

"I remember feeling really proud of myself," he said. "It just reassured me that really having a strong mentality makes a difference."

Dr. Angela Riccobono, a psychologist and director of rehabilitation psychology at Mount Sinai, who worked with Moses, said in her 20-plus years of experience, she's never seen someone overcome adversity with "such grace and a positive mindset."

"He understood early on that with the right mindset and the right people around you, there was little that could stop him," Riccobono said of Moses. 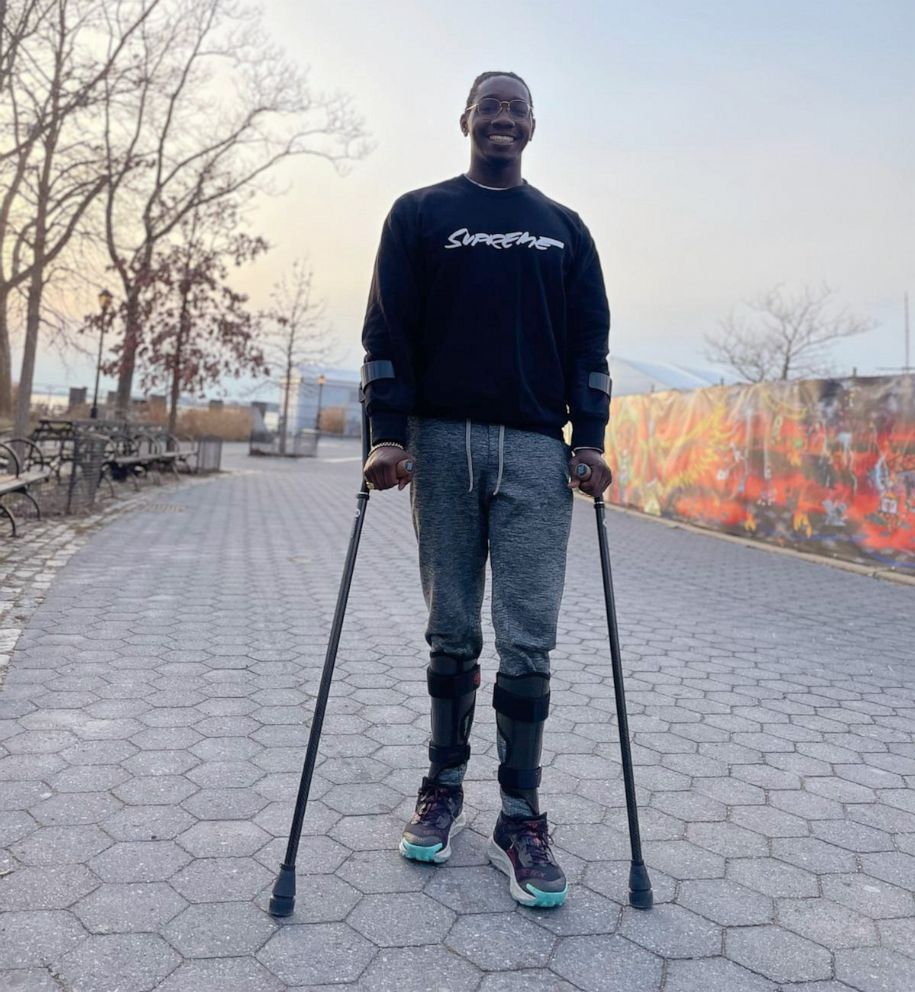 Courtesy Cory Moses
Cory Moses, 27, of New York, has learned to walk after being paralyzed in a bicycle crash in October 2020.

Defying the odds, Moses has progressed to being able to walk as far as 10 city blocks on his own, according to Pike.

"I think they were hopeful he would be able to use some assisted device to do some standing and some activities like that but were unable to say how far he’d be able to walk, like he is now," Pike said.

Moses still utilizes crutches and leg braces to walk if he is going a longer distance, and relies on his wheelchair at times, too, as he continues to build his strength.

He lives on his own and works at a local school while also working to fulfill his next dream, competing in the Paralympic Games in fencing, a sport Moses said he had always wanted to play as a kid but was never able to because it was not accessible. 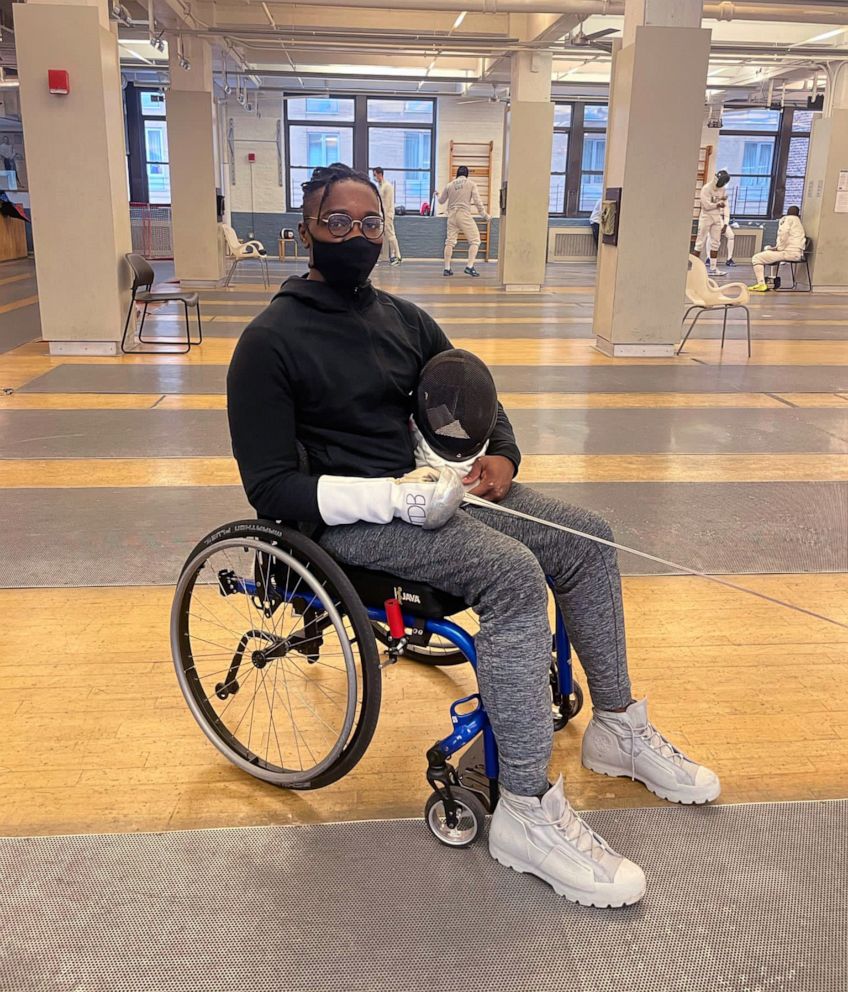 Courtesy Cory Moses
Cory Moses, 27, began competing in fencing after being injured in a bicycle crash in October 2020.

After the accident, Moses got a chance to try fencing thanks to his friend, Curtis McDowald, a member of the U.S. Fencing team for the 2020 Tokyo Olympics, who invited him to a training facility in New York City. 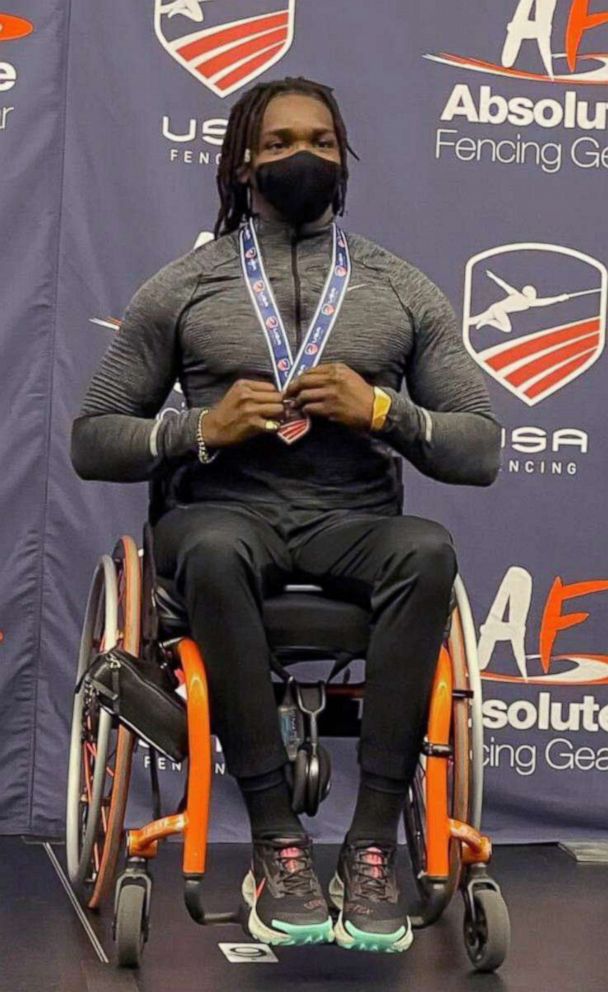 Courtesy Cory Moses
Cory Moses, 27, began competing in fencing after being injured in a bicycle crash in October 2020.

Moses committed himself to the sport and took home two medals in his first competition in January in California.

"The goal is Paralympics," said Moses. "I'm the type that whenever I do something, I want to do it to the maximum."