The first things you’ll notice on Kenneth Felts' Facebook page are his big smile and rainbow hoodie. It’s a new addition to go along with a message for everyone that knows him: “I am free, I am gay and I am out.”

The 90-year-old recently came out as gay to friends and family after pretending to be straight for the better part of a century. It’s a decision Felts came to as he began working on an autobiography during quarantine, prompting memories and emotions to resurface from his past.

“For a long time, the truth was buried deep down in my soul and I adopted a straight persona because I did not think I had another choice,” Felts said. “I would’ve had to contend with all the scorn from society, be labeled a pervert or deviant. But people are much more accepting today and I felt I had to find the courage.”

Felts, who lives outside Denver, said it all started after he told daughter Rebecca Mayes about Phillip -- a man he fell in love with in the 1950s. It was a revelation he didn’t plan.

“After a long day of writing my mind was preoccupied and somehow I said something about how I wished I never left Phillip,” Felts said. “She never heard of him before and all the sudden she knew.”

MORE: What my viral coming out video taught me about unconditional love

The moment hit close to home for them. Two decades earlier, Mayes, who is Felts' only child from a marriage that ended in divorce, told her dad she was lesbian. Now their roles were reversed.

“I was so happy for him, he can finally be himself,” Mayes said. “But I also felt a terrible sadness of losing that relationship with Phillip and not being himself for all these years.” 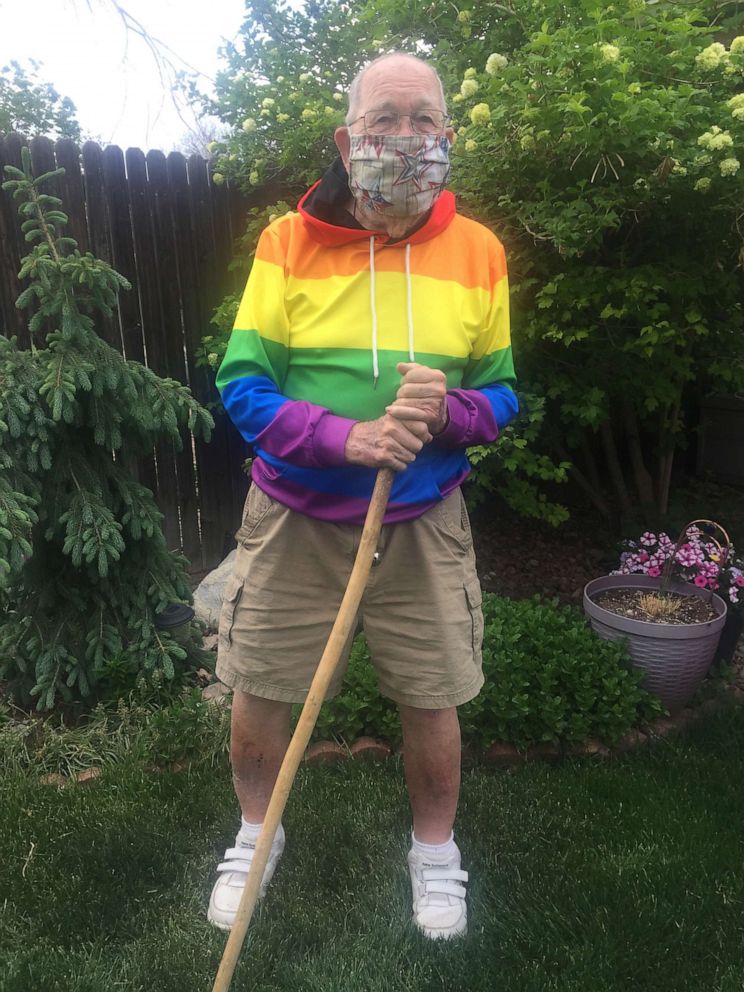 Feeling compelled by a newfound sense of self-acceptance, the time felt right by Felts to be vocal about his true identity. He began writing a Facebook post and email, and shortly thereafter, messages of love and support from family, friends and even strangers came flooding in.

MORE: Father opens up about coming out to his 3 sons: I'm still the same dad as before

“It’s been absolutely overwhelming,” Felts said through tears. “The positive response from people all over the country and world, they're just wonderful and I feel responsible to respond to every one that comes in.”

In one of those messages, a woman offered to help Felts track down Phillip, only to find the man died two years ago. It was a devastating update.

“I appreciated the help and the loving memory of him is now living on through all of us,” Felts said.

Felts said he is proud to be out and has embraced the larger gay community. In addition to his rainbow hoodie, the father and grandfather is raising money for and participating in LGBTQ events, including a virtual 5K race. He said he’s done hiding and hopes his story inspires others to come out as well.

“I've had several people say they were on the verge of making this decision, and my story has helped them,” Felts said. “I just hope people understand they'll be accepted and it'll be much more positive than they might assume. Certainly, that was the case for me.”