When Houston natives Kelley Dixon Tealer and her mother Alva Marie Jenkins embarked on the journey to discover their ancestral roots, they had no idea they would soon realize a dream that was more than 150 years in the making.

The quest to discover one’s family lineage can sometimes be difficult for some Black people throughout the African Diaspora due to the historical complications brought about by slavery. Finding records can be a daunting task.

Tealer says she spent most of her life not knowing the full extent of her family’s history, but the passing of an elder loved one inspired her to start a search through Ancestry, a Utah-based genealogy company that says it has helped millions of people discover their roots.

"I wanted to stay close to my grandparents and when they both transitioned, I just wanted to keep that piece of history. I wanted to dig more," Tealer told "Good Morning America."

It was then that Tealer connected with Dr. Nicka Sewell-Smith, an Ancestry genealogist who discovered through the Freedmen’s Bureau records that Jenkins and Tealer were second and third-generation granddaughters of Hawkins Wilson, a man who was born into slavery in Virginia, and separated from his family when he was sold as a boy.

The lost letters of Hawkins Wilson

The Freedmen's Bureau records are a collection of records compiled by Congress following the Civil War to "help formerly enslaved people make the transition from slavery to freedom and citizenship," according to the National Museum of African American History and Culture.

After the war ended in 1865, the Freedmen’s Bureau was tasked with trying to reconnect families who were separated during slavery and transitioning formerly enslaved people into the workforce.

(MORE: Advocates call on Biden to act on reparations study by Juneteenth)

Twenty-four years after being separated from his family, Wilson, living as a free man in Galveston, Texas, sent letters to the Freedmen’s Bureau seeking assistance to find his siblings.

"Dear sir, I am anxious to learn about my sisters, from whom I have been separated for many years," Wilson wrote to the Freedmen’s Bureau chief in a letter delivered to the agency on May 11, 1867.

"I have never heard from them since I left Virginia twenty-four years ago. I am in hopes that they are still living and I am anxious to hear how they are getting on," the letter read. 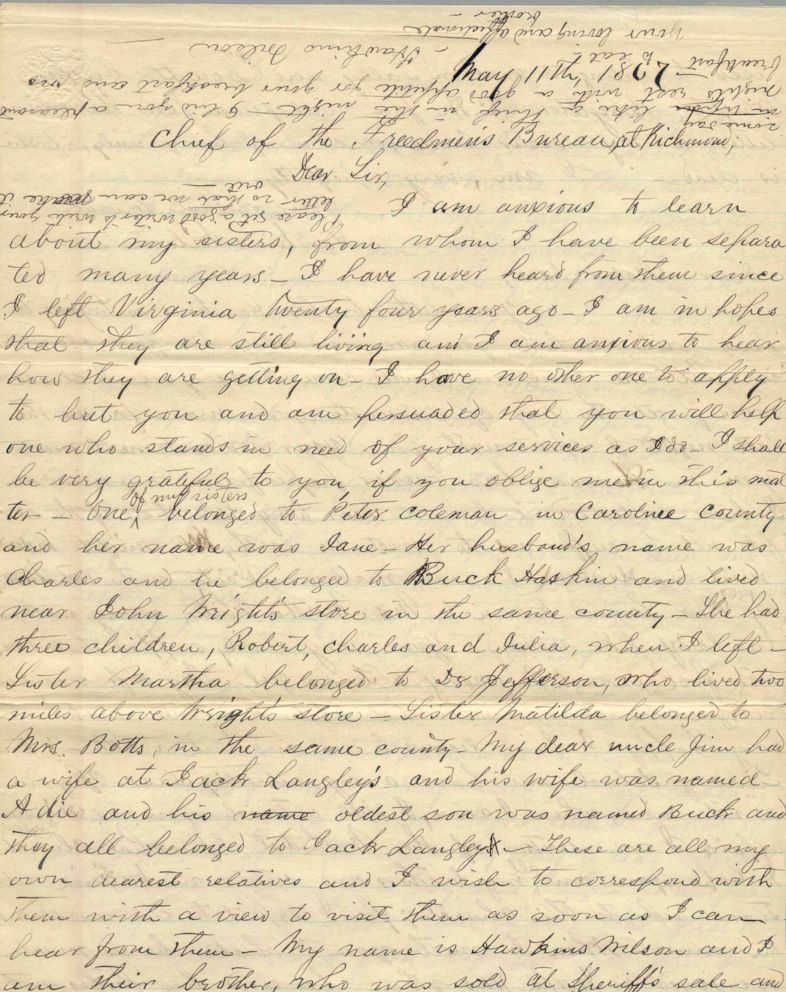 National Archive
Hawkins Wilson writes a letter to the chief of the Freedman's bureau in search of his family after they were separately during slavery, May 11, 1867.

Wilson sent several letters for his family to the bureau, hoping to reconnect, but they were ultimately sent to the wrong county and never made it to his relatives.

National Archive records show that Hawkins wrote to his sister Jane, hoping to hear back.

"Dear Sister Jane, your little brother Hawkins is trying to find out where you are and where his poor old mother is. Let me know and I will come to you," he wrote. "I should never forget the bag of biscuits you made for me the last night I spent with you. Your advice to me to meet you in heaven has never passed from my mind. And I have endeavored to live as near to my God so that if he saw fit not to suffer us to meet on earth, we might indeed meet in heaven."

(MORE: Juneteenth is now a national holiday. What's next?)

Wilson also detailed his life in Galveston as a free, working man, a husband, and a Christian.

”I'm writing to you tonight, my dear sister, with my bible in my hand, praying almighty God to bless you, and preserve you and me to meet again,” he wrote.

It is unknown if Wilson was ever able to reunite his family, but Sewell-Smith was able to use the names mentioned in his letters, in addition to other historical records and Freedmen's Bureau documents, to connect Tealer and Jenkins, his descendants.

"What the Freedmen's Bureau does is it helps us scale the wall or in essence, blow the wall up because it really peers into a very specific period right after enslavement, where these individuals were walking into their economy, their lives, how they wanted to be referred to in terms of their names, and who they wanted to work for," Sewell-Smith told "Good Morning America." "And Hawkins was just enough of a cookie crumb for us to be able to connect him back to the ancestors and the family that he had been ripped apart from."

Wilson's words are the focal point in a new documentary by Ancestry titled "A Dream Delivered: The Lost Letters of Hawkins Wilson," in which Tealer and Jenkins embark on the journey of reconnecting with other Wilson descendants.

"Now is the time. This is the time for his story to be shared," Jenkins told "Good Morning America."

Tealer and Jenkins were able to find and meet their sixth cousins, Valerie Gray Holmes and Linda Epps Parks, the descendants of Wilson's Uncle Jim.

Epps Parker said she was overcome with emotion when the relatives met for the first time during the documentary's filming, in April 2021.

"I felt like I had known Kelley and her mom all my life. I felt connected to them. It just was genuine," she told "Good Morning America." 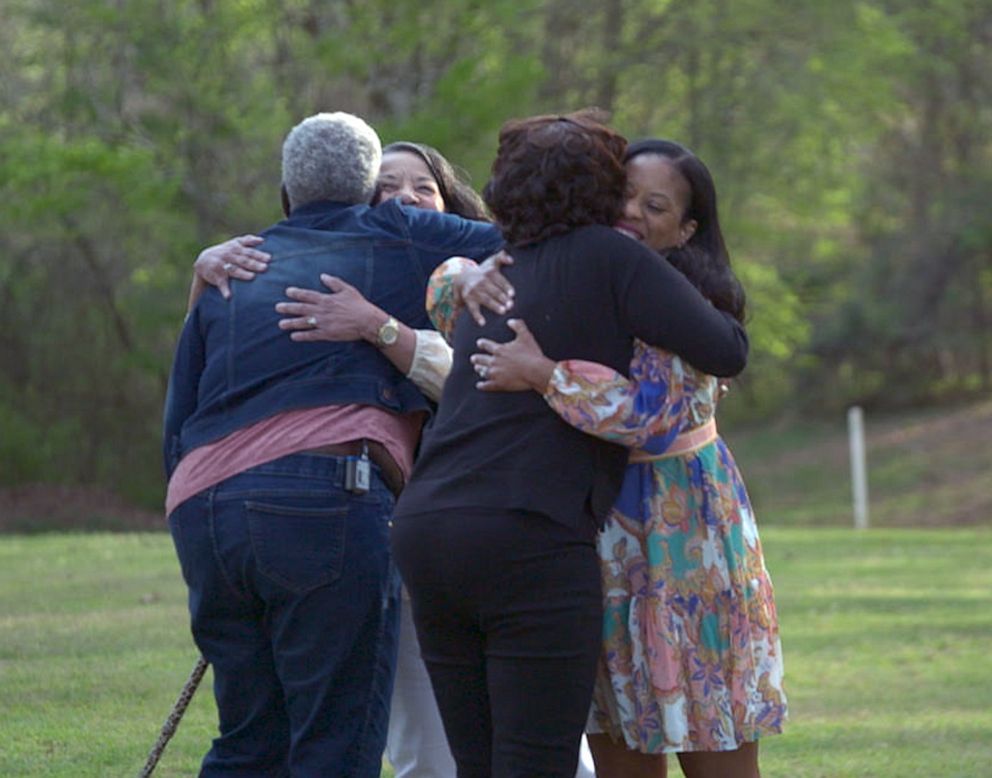 She told Moton, tearfully, that if she had the chance, she would tell Jane, "I found your brother, Hawkins. Can I read you his letters? Tell me about your journey. What have you been doing in these past 24 years?"

More than 150 years after Wilson sent his letters, Epps Parker said her ancestor finally achieved his dream to reunite his family.

"You can rest because your letter has been delivered," Epps Parker said, addressing Wilson. "We are taking the baton and passing it on to other family members."