She woke up, got her kids off to school and then hopped on the Washington, D.C., Metro to head to her job as a communications officer at a bank.

The Jordanian-American mother of three was counting down the days until her debut novel, "They Called Me Wyatt," about a murdered Jordanian student, would publish nationwide next month.

But on her commute to work, she quickly hit send on a social media post that would cause her life to unravel.

The now-deleted tweet read: "When you're on your morning commute & see @wmata employee in UNIFORM eating on the train. I thought we were not allowed to eat on the train. This is unacceptable. Hope @wmata responds. When I asked the employee about this, her response was, 'worry about yourself.'"

It took less than 240 characters and 35 minutes to dismantle a career and book she spent four years writing.

Tynes' post, which included a photo of the employee, instantly received a flood of replies, accusing her of racism, which the Jordanian-American writer denied.

"I'm an immigrant of color. And this was the last thing on my mind when I sent out the tweet," she said. "At that moment, I needed to complain about the metro service."

Within 35 minutes of hitting send, Tynes had taken down the tweet, realizing she made an "error of judgment."

But the damage was done to her reputation. She was already being branded online as "anti-black," "elitist" and "narcissistic."

She tweeted an apology and said she called the Metro Authority to make sure the employee wouldn't be penalized.

A word from us on what happened this morning with Natasha Tynes in DC. pic.twitter.com/gJY4lZLFUQ

Tynes said she landed in the emergency room that night after suffering a "nervous breakdown."

It took less than 240 characters and 35 minutes to dismantle a career and book she spent four years writing.

The rise of cancel culture

Online shaming has been around since the dawn of social media but cancel culture, or call-out culture as some have branded it, entered into a new league in the last few years.

"There's always been social rejection and ostracism ... but cancel culture has really taken that to the next level in terms of how widespread that information can be," author and psychologist Dr. Jean Twenge told "GMA."

It started out as a form of internet justice -- not just against products but also outdated morals and values -- but can involve people being quick to judge, or even considered bullying. 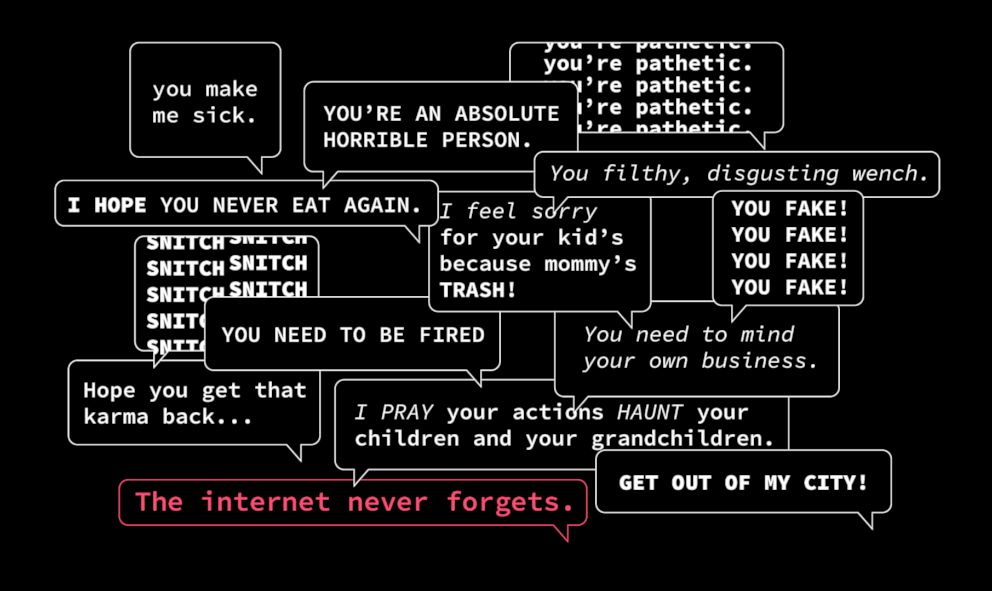 Online culture often doesn't leave room for nuance. People quickly unleash mobs of online attacks on people who they feel did wrong and "cancel" them, sometimes without having all the context or taking the time to discover the full story.

"These cases of social rejection can be more extreme and thus, more harmful," explained Twenge, a professor of psychology at San Diego State University and the author of "iGen," about social media use among adolescents.

Even former President Barack Obama has spoken out about the dangers of the social media phenomenon.

"That's not activism. That's not bringing about change. If all you're doing is casting stones, you're probably not going to get that far."

Former Pres. Obama calls out "woke" social media users who are "as judgmental as possible about other people." https://t.co/t5C4xsmDra pic.twitter.com/mMv6L5yMo7

"Like, if I tweet or hashtag about how you didn't do something right or used the wrong verb then I can sit back and feel pretty good about myself, 'cause, ‘Man, you see how woke I was, I called you out,'" he said at an Obama Foundation summit last November.

"That is not activism," he added.

The term "cancel culture" peaked online this past fall, according to Google Trends, after Obama's speech.

The world is messy; there are ambiguities. ... People who do really good stuff have flaws.

"The world is messy; there are ambiguities. ... People who do really good stuff have flaws. People who you are fighting may love their kids, and share certain things with you," the former president said.

One of the reasons cancel culture has caught on much more rapidly in the past few years is because people can hide behind screens, Twenge explained.

"It's much easier to be aggressive and cruel to someone online. It's a lot easier to insult somebody on Twitter than it is to insult them to their face," she noted.

Life after being canceled

It has been over six months since Tynes' online incident, but she is still dealing with the real-life fallout it caused for her and her family.

"I was called every racial slur you can think of ... a terrorist, an airplane bomber and Hamas and Hezbollah and 'go back to your country,'" said Tynes, who has lived in the U.S. for 14 years.

I've had a career for 20 years and now when you Google me, that's the first thing that shows up.

Tynes said she has received death threats and has returned to Jordan twice out of fear for her safety. She even sued her publisher for $13 million for breach of contract and "extreme emotional distress," but had to drop it after she couldn't afford the legal fees.

"I've had a career for 20 years and now when you Google me, that's the first thing that shows up."

Tynes' story is not unique -- and neither are the emotional ramifications she's had to deal with in the fallout.

It also happened to artist Mary Purdie in March 2019 after she was accused of plagiarism for a piece of artwork she was commissioned to do by a brand. The claim was later proven to be false.

"My first thought was, 'Oh my God, I'm being cancelled,'" Purdie recalled after seeing a swarm of hateful comments pop up on her Instagram, @DrawnByMary, where she showcases her work.

Purdie claims she researched the origins of the meme before she created the piece, but received such an influx of "harassment" from commenters that she began to doubt herself.

I just finished cancer treatment and 100 people are in my DMs every day this week telling me to kill myself.

"Even though I felt strongly that I didn't do anything wrong, I'm like, 'I just want this to go away.'"

She tried to make amends by issuing a public apology on her page, but it was "torn to threads."

"I just finished cancer treatment and 100 people are in my DMs every day this week telling me to kill myself," she recalled.

"Even if the plagiarism claim was true, is that, you know, like, is that fair? That I should die?" she asked.

The plagiarism claims were false, but Purdie is still dealing with the "residual trauma" from the incident.

I've survived five miscarriages and breast cancer and this was still the worst thing that's happened to me.

"I've survived five miscarriages and breast cancer and this was still the worst thing that's happened to me," she told "GMA."

Not even the biggest internet figures are safe from being "canceled"

One of the biggest cancellations of 2019 was when vlogger Tati Westbrook publicly severed ties with fellow influencer James Charles in a YouTube video, which resulted in Charles losing nearly 3 million followers in a week.

YouTube beauty guru Manny Gutierrez knows what it's like to see your online world crumble in an instant. He recalls watching his follower count of nearly 11 million drop before his eyes last August.

"It's such a crazy thing to see something you've worked so hard for for years and years kind of going away before your very eyes," he told "GMA."

Gutierrez, better known as Manny MUA, was embroiled in a series of scandals that rocked the beauty YouTube community toward the end of 2018 that became known as "Dramageddon."

A group of influencers were being called out by fans and other accounts for their allegedly shady past behaviors -- including, but not limited to, allegations of racist tweets and not disclosing payments on sponsored posts.

When your world is coming apart, it feels like you're gonna die.

Gutierrez's fellow vloggers and YouTubers, like Laura Lee and Gabriel Zamora, were being called out by their own fans -- and he soon found himself in the same boat for being associated with them. Despite his record being one of the cleanest, he was branded as "two-faced" and "toxic."

"I was like, depressed, in a dark place. You know, when your world is coming apart, it feels like you're gonna die," said the 28-year-old, who has dealt with anxiety and depression in the past.

Gutierrez decided to take a break from social media for two months to focus on his mental health and "re-evaluate" his career goals and relationship with social media.

He sought out professional help and credits therapy and his family's support for helping him through this time: "It is the most important thing for me."

I haven't been this happy... in a very long time ❤️ #redonsocialblade #greeninlife

When Manny MUA returned from his social media silence, he posted a raw eight-minute video promising to be more genuine and honest with his followers.

"I wanted to show people that, you know, you go through a hard time, you know, but you can always come back to fix yourself," he told "GMA."

Twenge said it's important to teach younger generations about empathy when it comes to online discipline and that "there are ways to express your displeasure with someone that doesn't necessarily have to rise to the level of 'canceling them.'"

"We have to get the message across that just because somebody does one thing wrong doesn't mean that they're a bad person forever," she added.

Now, Gutierrez, Purdie and Tynes all are back on social media. Still rocked by their cancellations, they said they are more aware of what they post and how they interact with others online.

"I'm not so fully invested in social media like I was before. ... I treat it like it is my job not like it's my whole entire life," said Gutierrez.

Purdie said there are ways to "call out" someone you disagree with online, but she believes internet pile-ons can lose effectiveness and do more harm than good.

"I understand why call-out culture exists. But I think people who are participating in it need to really pause and ask themselves, 'Is this productive? Is my voice adding something or am I just making more noise?'"

According to Tynes, social media platforms like Twitter have a ways to go when it comes to cyberbullying. Although she accepts responsibility for sending the initial tweet, she vows after her incident to "never use my social media influence for the negative."

"I'm learning to even forgive the online throws because I can't just continue to hate what they're doing. It's something that's going to probably follow me all my life," said Tynes, whose novel was eventually published for sale online.

Overall, Purdie believes that "canceling people is not the answer."

"Take a pause and think about what you're doing and how it's affecting the person that's receiving those messages because you're not the only one sending them -- there are thousands and it's only causing more harm," Purdie said. "It's not doing anything productive."