By GMA Team, Yi-Jin Yu
Share —
Sign up for our newsletters to get GMA delivered to your inbox every morning!

The 28-year-old defender, who was born without a left forearm and hand and has been playing soccer since she was 5, became the first player with a limb difference to start a game for the women's national team on the international stage, an achievement known as "earning a cap."

Pickett, who also plays for the North Carolina Courage, helped the U.S. defeat Colombia 2-0 during a friendly match on June 29 at Rio Tinto Stadium in Sandy, Utah.

"It's a moment I probably will never be able to fully describe," Pickett told "Good Morning America" Thursday from WakeMed Soccer Park in Cary, North Carolina. "My dad told me the night before, 'When you go out there, take it all in.' And I think that's what I did when I first walked out on the field."

"I saw the crowd and everyone chanting 'USA' and I just knew that my biggest dream just came true. I think it was so cool to see my parents in the stands and just all the little kids screaming your name and things like that. And honestly, it's the best feeling I've ever had in my entire life," she said. 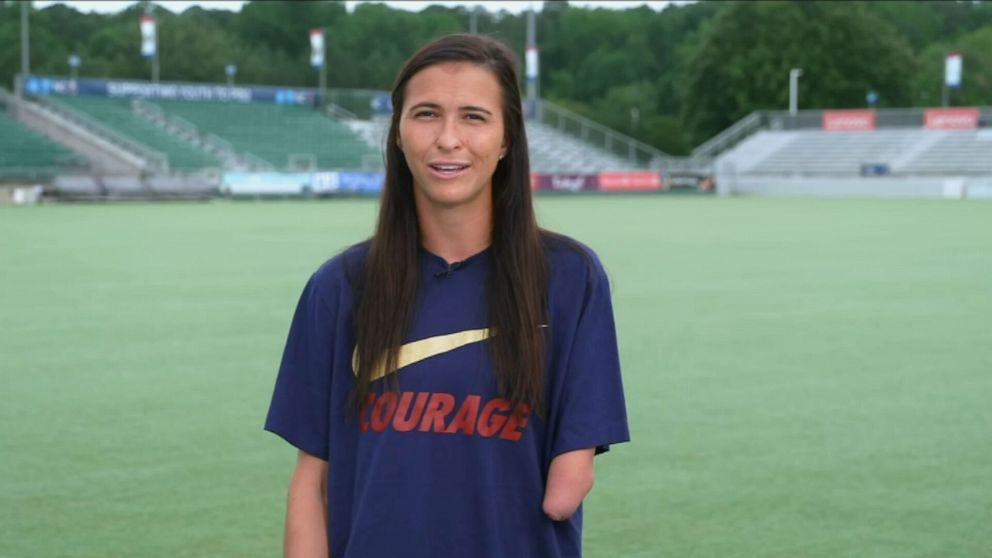 It's not the first time Pickett has been in the spotlight. Back in 2019, a photo of Pickett meeting with a young fan named Joseph Tidd, who also has a limb difference, went viral on social media. She and Tidd shared a fist bump at the edge of the field at Exploria Stadium in Orlando, Florida.

Pickett revealed in an April Instagram post that, in addition to inspiring young soccer fans, she hopes to be an advocate for others with limb differences.

"While I know that I am confident and comfortable with showing my arm, I know there are so many people in the world who aren't. The feeling of being different and the anxiety of not fitting in is something that I have been through," she wrote in part.

"I want to be an advocate for others like me, and for the longest time I didn't use my platform well enough. Let's all try to love ourselves no matter what we look like and let's all be kind to each other above all else," she added.

The rising soccer star said she plans to use social media to fulfill her advocacy mission and won't shy away from talking about limb differences. It's a conversation she said is long overdue.

"Before, it wasn't like that. Growing up, I didn't want to be different. In college, my freshman year in Florida, I would wear long sleeve shirts and things like that just to make sure people didn't see that I was any different than them and they wouldn't stare and now it's just all changed," Pickett said.

"Now that social media is so big, I think that it's a really good platform to be able to reach people," she added. "I've had people reach out from different countries, different states and it's just so cool to meet people like me ... I know sometimes it can be hard and uncomfortable. But I think the more that we talk about it, the better it'll be for everyone."

For young people following her journey, Pickett hopes to change the narrative, one that she didn't always see in mainstream society.

"As time went on, I just realized that it actually is incredible to be different and honestly that everyone out there is different in some kind of way. We all have our own little quirks and things," she said.

Pickett credits her parents for always supporting her and encouraging her to do anything those with two hands could do -- and it's a part of her message to others now as well.

"My dad always told me, 'Never let anyone turn your sky into a ceiling' and ... just to follow your dreams. There's no one out there who should ever tell you that your dreams are too big," she said. "Continue to be yourself along the way and just enjoy the journey."

"They also told me never to say the word 'can't' and nothing was impossible for me and to never get discouraged and to continue to try every time," she added. "You know, [if] I fell off the monkey bars and things like that, [I would] just get back up and try again."