By Dana Alkhouri
Video by Elisa Tang
Share —
Sign up for our newsletters to get GMA delivered to your inbox every morning!

Dickerson is the founder, executive director and conductor of both the Inner City Youth Orchestra of Los Angeles and the newly formed South Side of Chicago Youth Orchestra. Many of his students didn’t have access to an orchestra program in their community before.

"Music in itself has so many parts to it that bring benefit to one's life," Dickerson told "Good Morning America." "It instills within a person personal discipline, personal self-determination, the pursuit of excellence to do something meaningful."

That's why this conductor has devoted his over four-decade career to making classical music more inclusive to reach communities of color.

MORE: A cut above: Why this Delaware principal opened a barbershop inside his school

Since starting ICYOLA in 2009, it has grown to be the largest primarily African American orchestra in the country, with about 70 to 115 members, according to the organization.

In July 2019, Dickerson expanded, launching another orchestra to serve children in the inner city of Chicago.

"We started with Chicago because, once again, Chicago is experiencing this epidemic, epidemic of gun violence," he said. "There's a substantial African American and Latino population there and there is no youth orchestra that serves that community. That's why we went there and started to do what we did."

Anywhere there's an NFL team there needs to be an inner-city youth orchestra.

The program is free and mostly composed of high school students, but it is open to students of all ages depending on their music level; right now, Dickerson said they have kids as young as age 10. It's funded through nonprofits, including After School Matters, an organization that provides after-school and summer programs to Chicago high school teens.

Many of Dickerson's students come from Kenwood Academy High School, on Chicago's South Side, and come up through the Serendipity Program Family Center in Chicago, which gets young children started playing instruments early in life.

Nicholas Thomas, 16, has played the violin since age 6 and is now a junior at Kenwood Academy, and one of SSCYO’s original members.

"He is always there and the most dedicated," Dickerson said.

Thomas told ABC News that SSYCO has been "more like a family than an orchestra" to him and helped him grow as a person.

Akilah Morgan, a former student who is now the director of programs at ICYOLA, said the organization was crucial to her development and forming her identity at a formative time in her life.

"I was playing with other organizations where I'd found myself being the only black student or one of three within the organization and that kind of does something to you," she said. "You always feel like you're the other in that situation."

"For me, joining ICYOLA and just being a part of that organization, especially at such an important time in my life -- a transitional age, like 15, 16, where everything is changing in your life -- you're learning new things. You're prepping to go to college. Just all of that stuff is happening at the same time," Morgan explained. "It not only felt like a family, but it was, I think, really crucial to my development and to be able to help kids get that same experience."

It also offers another career option for the kids involved, though one where, overall, the field remains predominantly white. While there have been "modest shifts towards diversity" in orchestra musicians, including an increase in the proportion of Asians by 70% from 2002 to 2014, according to a 2016 industry study by the League of American Orchestras on diversity. But the number of African American and Hispanic or Latino musicians remains extremely low, rising to 2.5% in 2014 from 1.8% in 2002. Musicians of African American and Hispanic backgrounds are more often employed by smaller orchestras than larger orchestras, the report found. 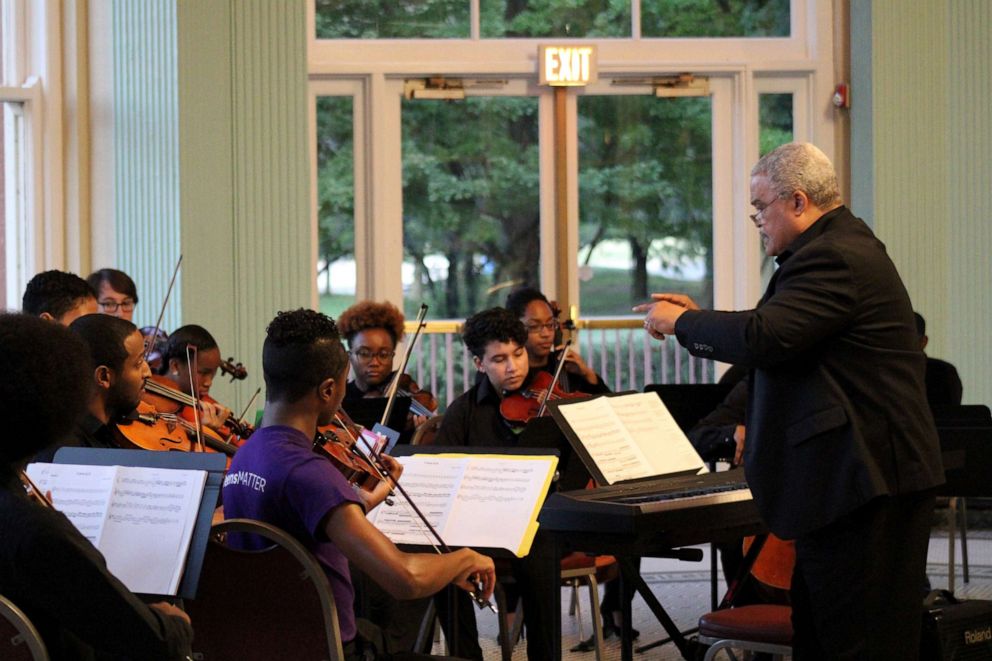 Nichole Smith
Charles Dickerson is the conductor and founder of the South Side of Chicago Youth Orchestra.

Dickerson flies to Chicago from L.A. every Friday to be there when the group holds its weekly rehearsal at Chicago State University. All concerts the orchestra puts on are free to the public.

However, he's more than just a conductor. He's become like a "father figure" to many of his students over the years.

"He's a good mentor. I think he's someone that you can talk to easily and is very encouraging," said Morgan.

"He's been really central to my life," she added. "I've been a part of this program since the beginning."

Based on the success in Los Angeles and so far in Chicago, Dickerson hopes to open more orchestras in other inner cities across the U.S.

"My mantra has been anywhere there's an NFL team, there needs to be an inner-city youth orchestra," Dickerson said.