One-third of adults age 30 or younger have student loan debt, with the median burden hovering at $17,000. In Debt Diaries, we introduce you to those who took on their debt and came away with a better understanding of themselves. Their testimonials offer hope -- and tools -- to show that you, too, can overcome debt.

DJ, 31, and Dannie Vann, 29, are college sweethearts who have worked to pay off over $130,000 of debt in three years. They share their journey toward financial freedom and share money management tips on their Instagram account, Pennies to Wealth. 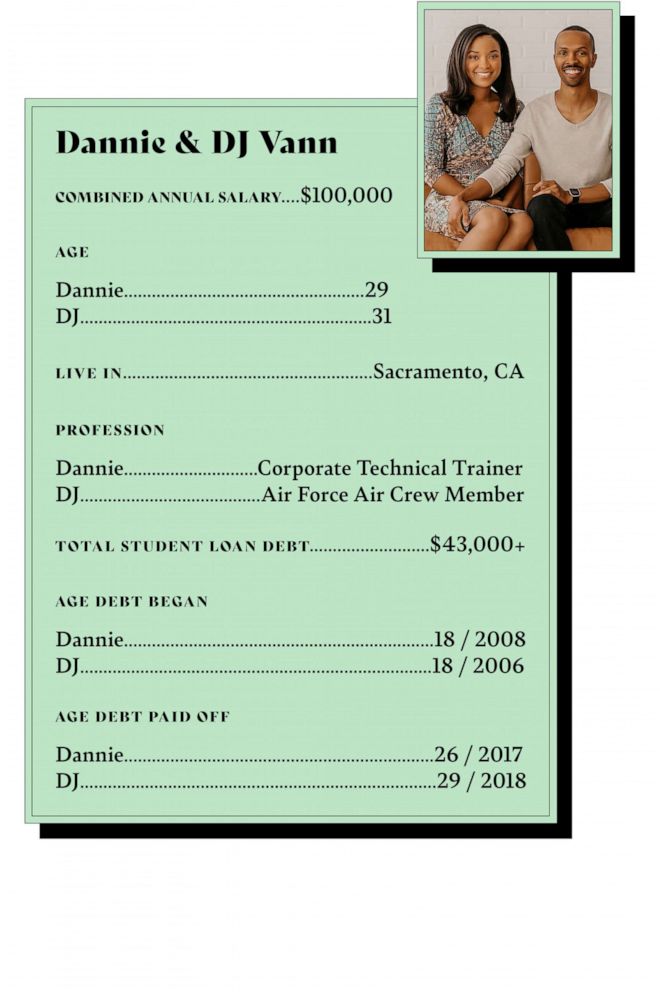 We went to North Carolina State University, about an 1 1/2 to 2 hours away from home. The money we took out went toward dorm rooms, apartments, books and food, and, for Dannie, tuition. Going to school in our home state, we didn't have to do the whole out-of-state tuition thing, which was very important.

Living with and taking on more debt

We weren't budgeting for anything or really keeping track of how much we were spending. We'd go out to eat, buy this thing that we needed for the house or pay for whatever else, but we weren't tracking any of it and [spending] was getting away from us.

We'd see these people our same age on Instagram buying cars, going on trips and doing all this stuff, and it felt like we're over here putting everything toward student loans. It was just a really frustrating thing.

We had a $3,000 bed, we started off with everything from Ikea, down to the mattress. One day we woke up and our backs hurt, and we're like, "Let's go finance a mattress."

MORE: Debt Diaries: She paid off a $102K student loan and bought a house in the same month

When we had been married about three years, we had a death in the family ... and we couldn't even fly home. We had no money, we were living paycheck to paycheck, just coasting through life.

We were like, "What is it that is weighing us down that we can't even fly home?" We sat us down and put it in a spreadsheet. That's when we saw how overextended we were on credit cards, because we're not just living paycheck to paycheck -- we couldn't even cover our living expenses and that was spilling over to credit cards.

Picking a plan and paying up

We looked at our budget and we realized all the things holding us back from the goals we had.

MORE: A zero based budget helped this woman pay off $215k worth of student loan debt in 4 years

It was harder for us when we didn't know where our money was going. (It was easier once) we were able to actually see what was on our plate and actually know how much we had to pay off.

A lot of people see big payoffs and they're like, "Oh, I don't have the income." We didn't either -- we did not have income at all. That came with time and perseverance. 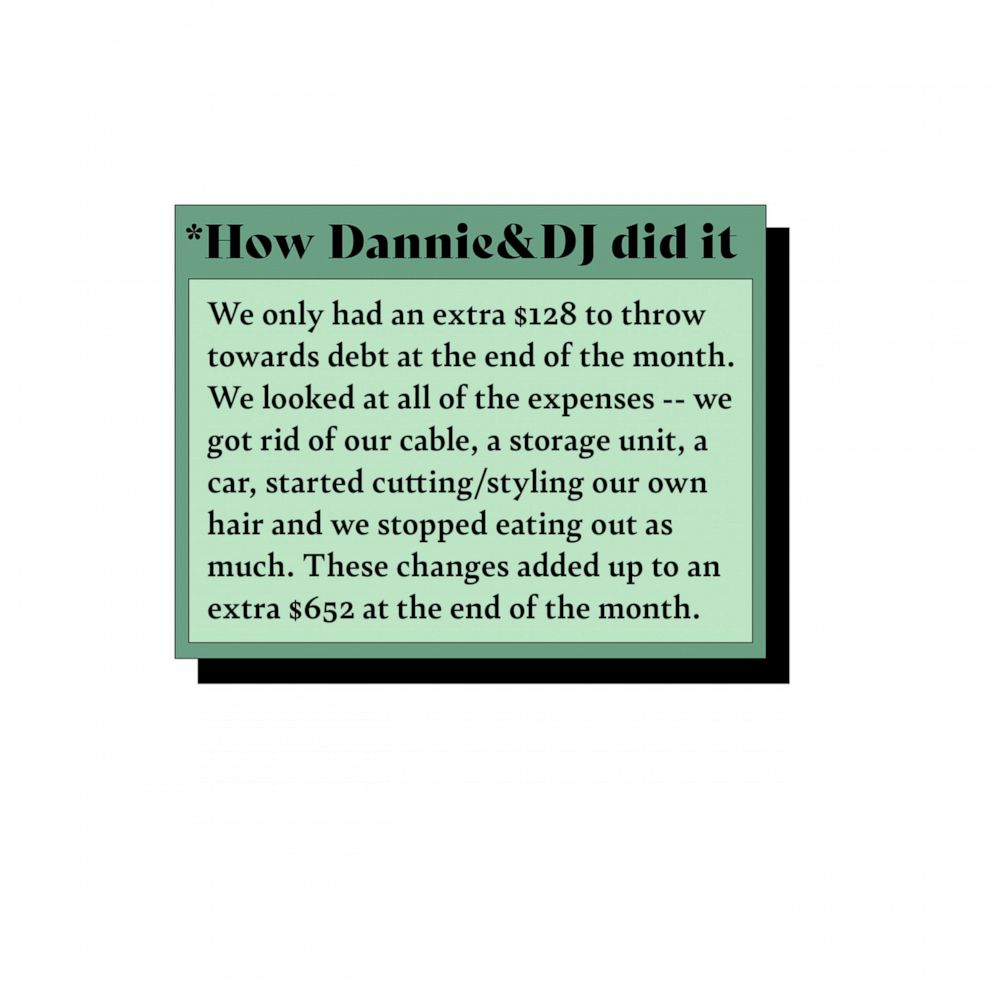 Following a budget really helped. We used a spreadsheet and we used an app called Goodbudget, which has a digital-envelope system. That helped track everyday expenses, like groceries or gas, because those are things that can throw you off if you don't track them.

We also lived in an RV for about nine months. That transition was exciting because we sold pretty much everything we had in the house we were renting. Within a week, we sold our TVs, couches, washer/dryer, bed frame and all types of other things. It was kind of funny because we had our mattress on the floor because we sold the bed frame and we had to sit on lawn chairs in the living room when we watched movies on the one small TV we had left. Luckily, we were able to park the RV on the military base. The monthly rent for the parking space was only $600 versus the $2,300 we were paying for the house we were renting.

Most of the time [through this process], we were happy that we finally had the money to pay off the debt, but were just mad that it was going to the debt instead of trips or investments or something of worth instead of paying off debt for degrees at least one of us wasn't using.

It just felt so freeing to pay off the debt. Even after we paid it off, we would go back and check it because we didn't believe it. We were happy each time he got a "paid-in-full" letter for the individual loans.

As soon as that money wasn't going towards debt anymore, it started going back towards savings. 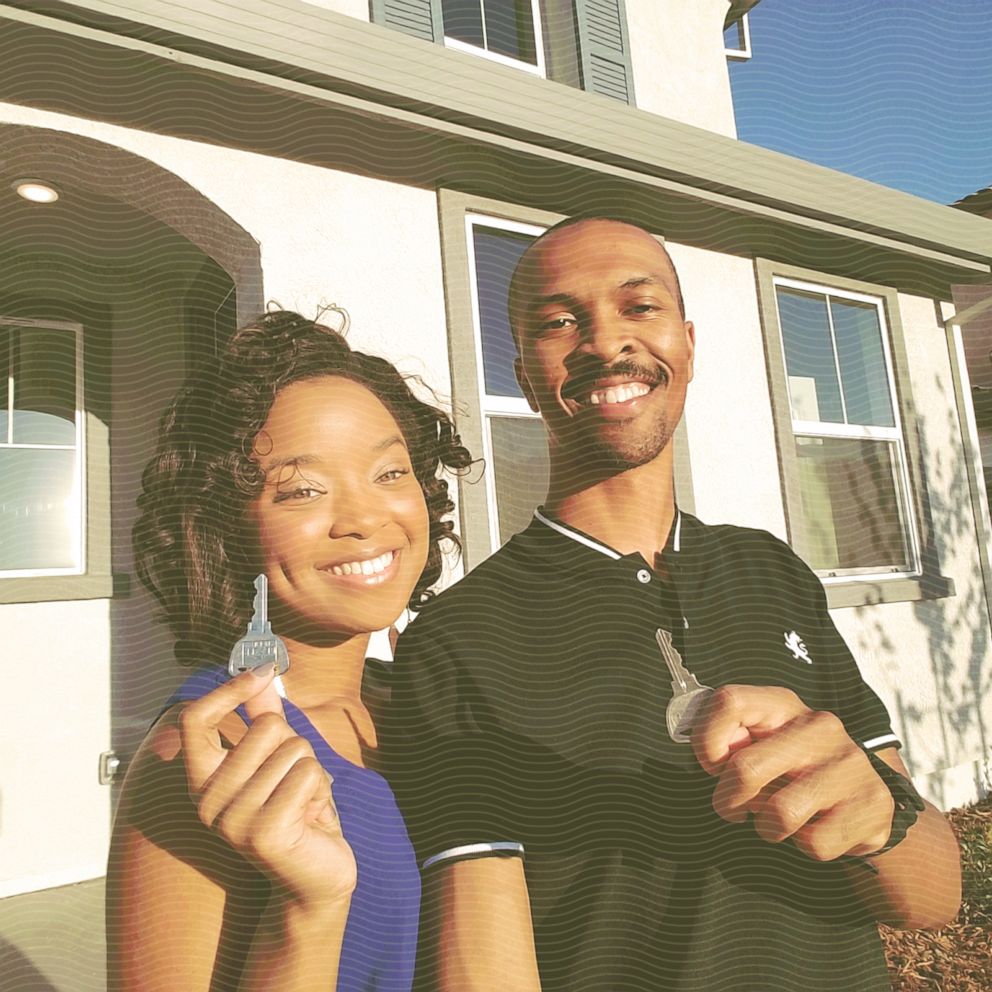 We were able to take our first international trip to San Jose del Cabo, Mexico, in 2018 to celebrate our progress of paying off debt. 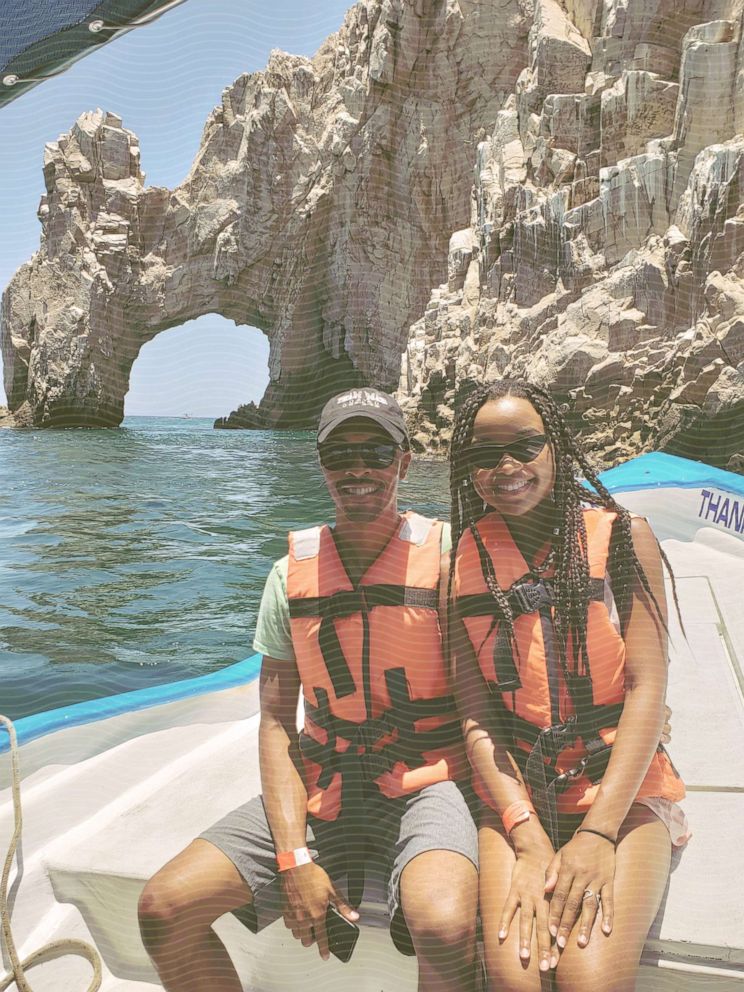 Our younger selves made a lot of mistakes. There were a lot of opportunities that probably could've made that student debt burden a lot less, but we just didn't do due diligence. We kind of regret that and going forward, want to make better decisions when it comes to money, like actually thinking about "if I do this now … ."

We also learned that we could be a little less frugal, because a lot of people don't come to that realization, especially after they've gotten out of debt. A lot of people think money is the goal, but it's just a tool and we had to learn how to let the money go, so if it went to paying off student loans or investing.

Their message to you

High school students should try to do dual enrollment or take AP classes if they're available. That's why Dannie's student loans were a little lower, because she came in with almost a year's worth of credit. And make sure that you're choosing a major that is reflective of how much you're paying in tuition. Don't try and take on so much debt that you're paying more in that you're getting in salary.

School choice is something that should be looked at early. Do your research to see if you can go to this school that maybe is in your state where you'd get just the same if not a better education than going across the country somewhere to an expensive school. Definitely look out and see what scholarships you're eligible for, because one thing that high school students have to their advantage these days is the wealth of information that's on the internet, such as applying to multiple scholarships all at once versus having to sit down and fill out like a paper application for each thing you wanted to apply for. 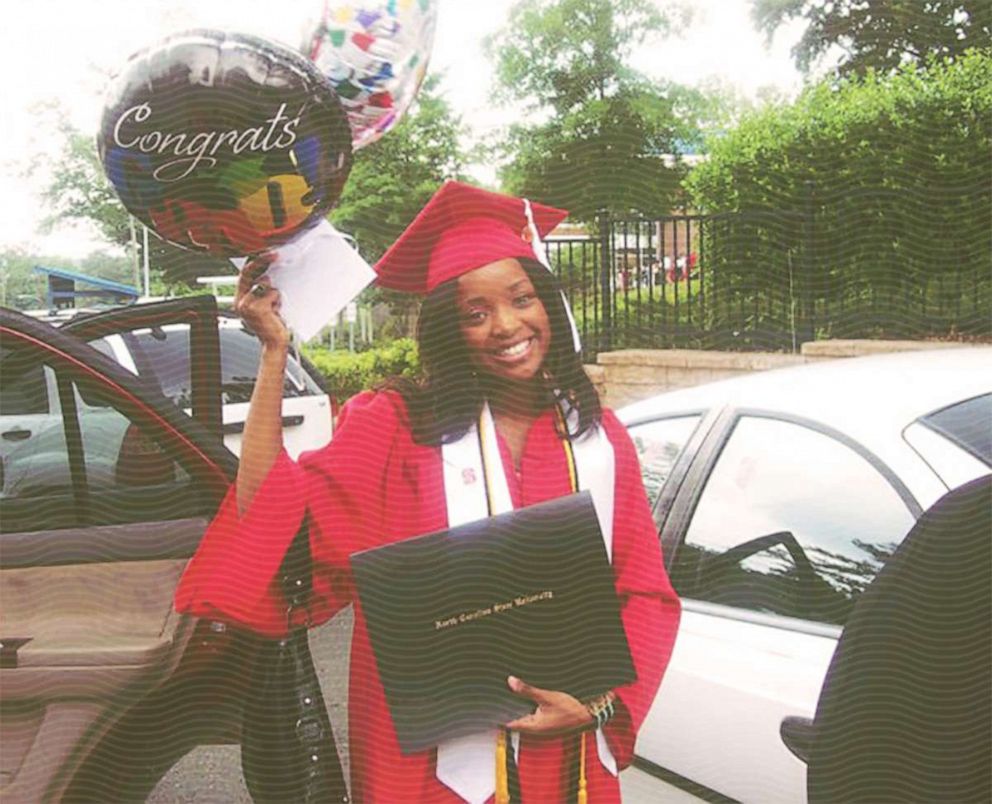 Also make sure that you're putting the extra money towards your principal balance, which we didn't understand at first. If you don't specifically tell loan servicers where to put extra money, many will "pre-pay" future payments. ("It's like your next payment isn't due for four more months, because you put down a good payment -- I want you to make this extra payment toward this one loan to make it go away faster.") 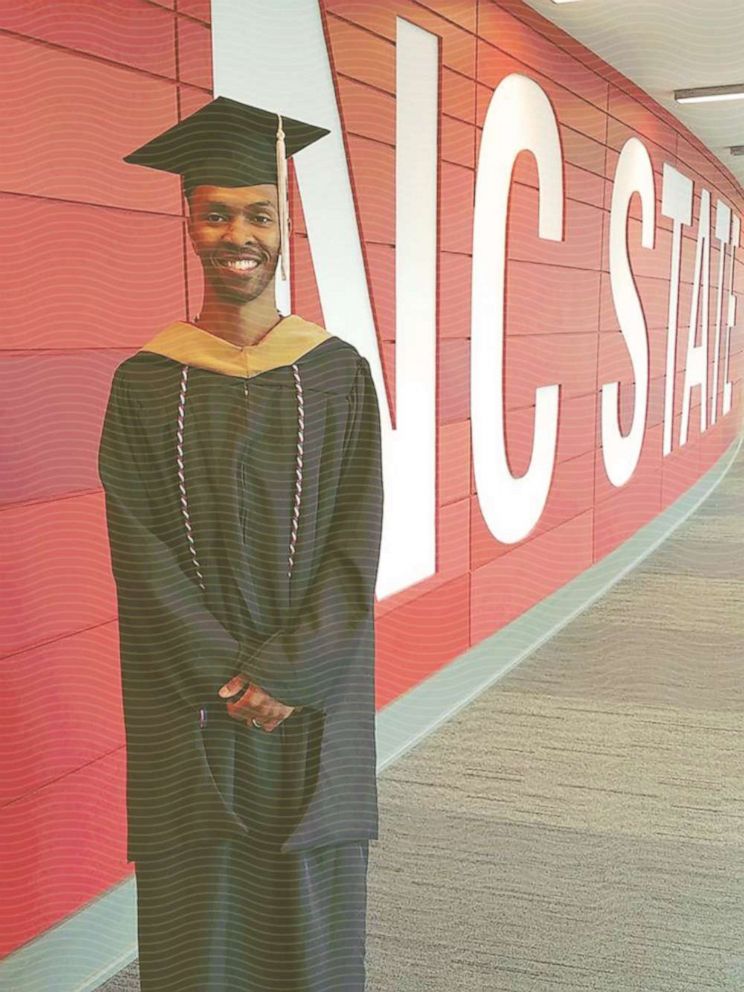 ABC Photo Illustration / Courtesy DJ and Dannie Vann
DJ Vann during his graduation from North Carolina State University in 2017, where he earned his MBA.

We paid over $130,000 over a two-and-a-half-year time span. We were living on one income and the only way to get money was to reduce our expenses. So we packed everything, left our apartment, lived in an RV to increase our income for those nine months and that was super exciting. We sold a car and were driving around in one car. DJ would wake up at like 5 o'clock, he would take Dannie to the ferry, and then would ride another hour for my basically minimum wage job until she could work her way up. Just those small sacrifices. We noticed that a lot of people get discouraged, especially when they see people paying off debt, they're like, "how can we do it?"

We asked the same question.

You can follow DJ and Dannie's continuing journey, and get more tips on living a debt-free life by following them on Instagram at Pennies to Wealth.