A North Carolina man wasn't planning to adopt a dog last week but one canine's story stood out to Steve Nichols and his partner, John Winn. According to Nichols, their decision was close to an "immediate" one.

Nichols, 61, and Winn, 58, have been together for 33 years and first learned about a dog who was abandoned for showing so-called "gay" behavior from a local news report.

"We saw the story about the owner who turned the dog into the shelter because he thought he was gay," Nichols told "Good Morning America." "The dog had humped another male dog and he contacted the shelter and said if you don't rescue this dog, I'm going to kill him. So the folks in the shelter were great and found a place for him immediately."

The dog was taken to Stanly County Animal Protective Services, a shelter that works with Greater Charlotte SPCA. He was given the name Fezco.

"My partner and I started talking about it. The conversation went sort of like this, 'You know, in 33 years, we've had to face the same ignorance, bigotry and stupidity from people and we weren't always able to do something about it.' But we thought, 'We can do something about this,'" Nichols told "GMA."

"So we started out in an effort to just do something to help, donate some money or something like that. Over a period of two days, it sort of morphed into, 'Well, he's going to be a part of our family,' and we just ended up adopting him." 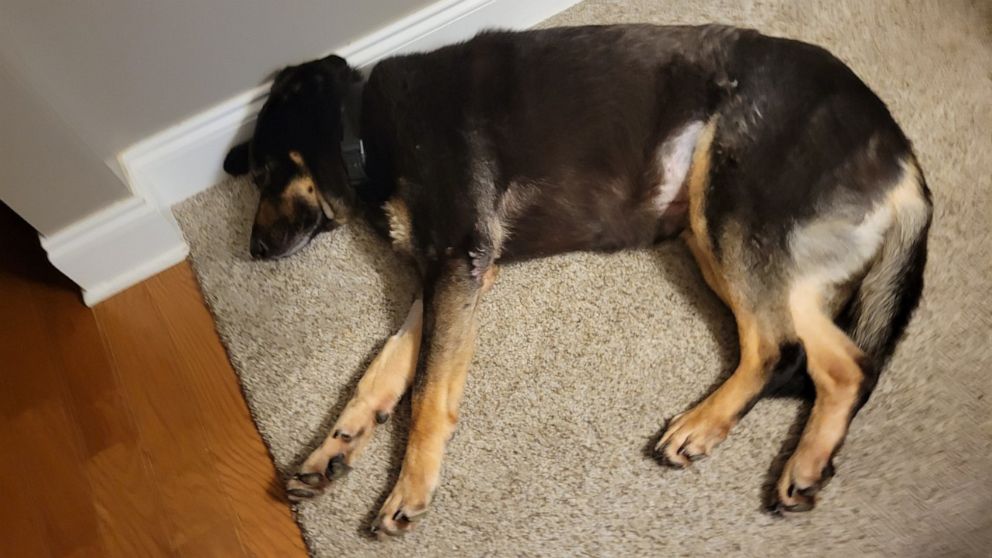 The couple, who live in Indian Trail, North Carolina, a suburb southeast of Charlotte, adopted the dog on March 22. Today, Nichols said the black and brown dog, who they renamed Oscar, is a "lovable mutt."

Oscar has since been neutered and received abdominal surgery to remove a testicle near his kidney that never descended normally. He is expected to start heartworm treatment next week.

His veterinarian, Dr. William Pressly, the owner of Pressly Animal Hospital in Matthews, North Carolina, said Oscar, who he surmises is a mixed breed -- possibly of German shepherd-husky mix -- and between 4 1/2 and 5 years old, has a long health journey ahead but he's optimistic about the dog's future. 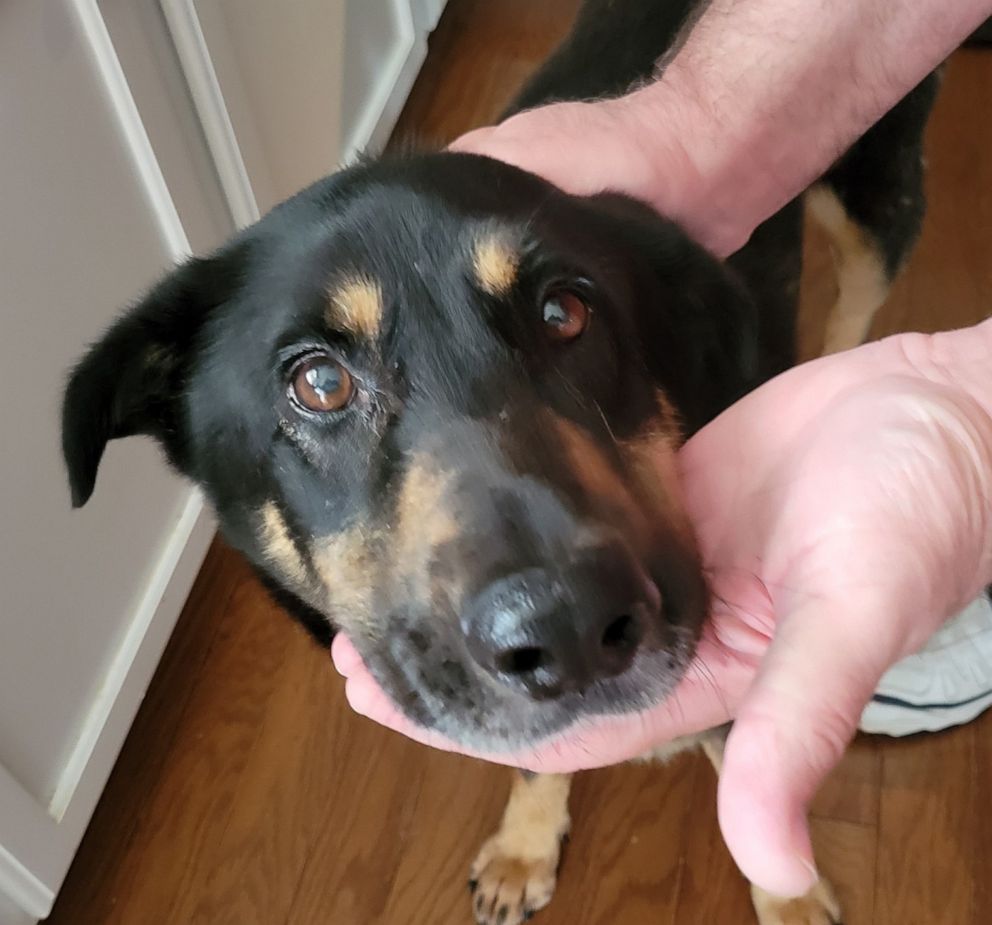 Courtesy of Steve Nichols
Oscar was adopted on March 22.

"Oscar is probably one of the sweetest dogs. He didn't have any dominance issues while he was here with any of the dogs that we introduced him to," Pressly told "GMA."

As for a dog's so-called "gay" behavior, Pressly, who has been practicing for 25 years, explained that it's not an accurate description. "There is no sexual orientation in canine, feline animal behavior. It's just not there," the vet said.

Nichols said Oscar was "very timid" at first but is slowly getting comfortable in his new home. 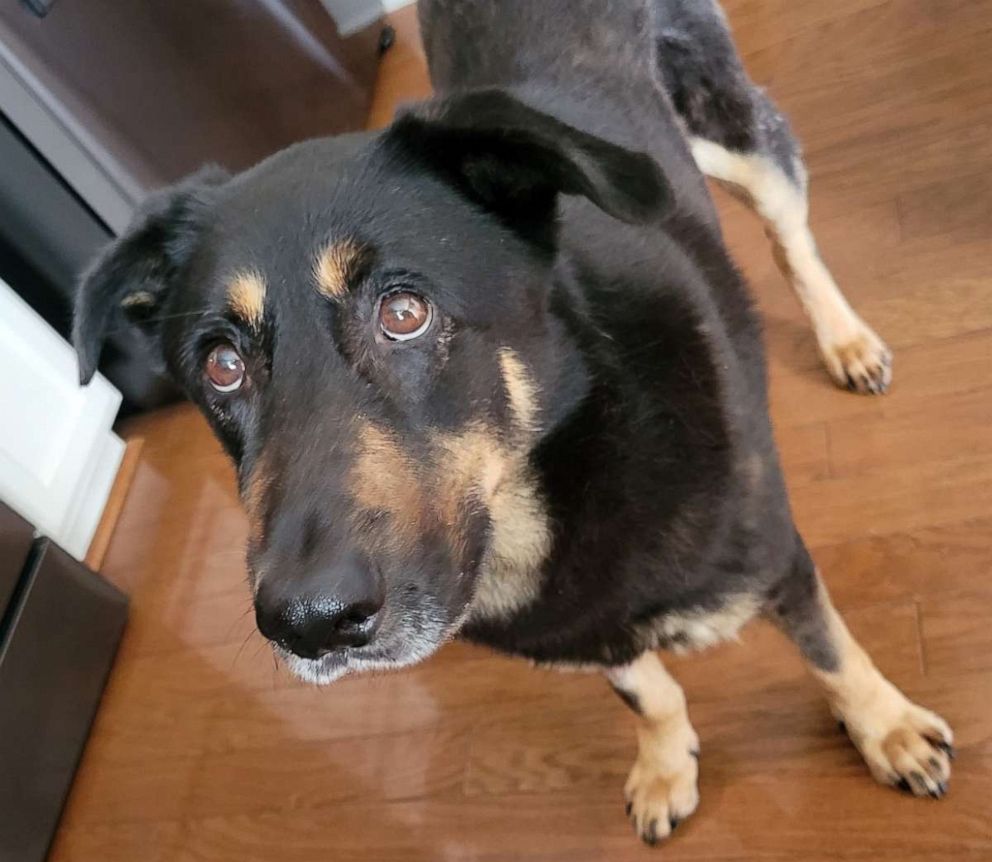 Courtesy of Steve Nichols
Oscar recently had surgery and will receive heartworm treatment next week.

"He's beginning to come out of that shell. The first day we had him, we were both overjoyed when he first wagged his tail. And then over the weekend, he kind of smiled at me a couple of times, which made me really happy. So I think he's just becoming a part of the family and his personality is emerging every day," Nichols said.

"He's just such a laid-back sweet dog, obeys commands. Doesn't get more than two or three feet away from either one of us," he added.

Oscar was named after the gay playwright and poet Oscar Wilde, Nichols said.

"He is a legendary author. He wrote 'The Importance of Being Earnest.' And he was also very out, which was a big deal in his day, a much bigger deal than it is today," Nichols explained. "So we named him Oscar. We always give our dogs human names."

Nichols and Winn are also proud parents to Harry, who was adopted from the local SPCA. 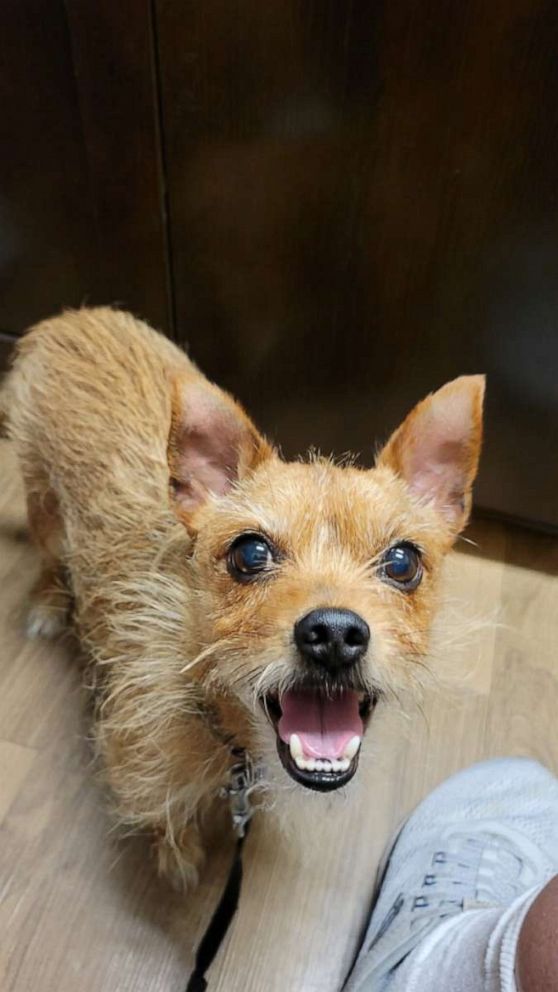 Courtesy of Steve Nichols
Oscar also has a new furry sibling, Harry, a terrier-Chihuahua mix who was also adopted.

"Harry is fine as long as Oscar doesn't take his space on the bed at night and steal his cookies," Nichols said.

Nichols said he and his partner hope Oscar's story will inspire others to adopt and stress that there were many involved in Oscar's success story.

"We feel very strongly that people in this country for the last four or five years are really craving stories with heroes and happy endings. And this is one of those stories, but we are not the heroes," Nichols said. "The heroes are the shelter workers, the veterinarian's office, the people of the SPCA, who deal with this every day.

"And so my message would be please adopt, don't shop. Adopt first because there are plenty of animals that need a loving home. And if you can't adopt, support them financially, they desperately need the money."