COVID-19 has upended life as we know it. In addition to causing widespread illness and death, it's affected the livelihoods of millions of Americans who now face unemployment or are struggling to keep their business afloat during the pandemic.

Amid virtual learning, political issues, and troubled travel plans, something else may be causing stress as the holidays approach -- giving gifts.

MORE: How to wrap gifts without tape, wrapping paper

Due to health concerns, many gift-givers this year may rely less on in-person shopping to avoid crowds and instead utilize online methods. Others may forego presents entirely due to unstable finances.

Elaine Swann, a lifestyle and etiquette expert who is the founder of The Swann School of Protocol, spoke to "GMA" about the best etiquette to approach various gift-giving scenarios during the holidays. Here is her advice. 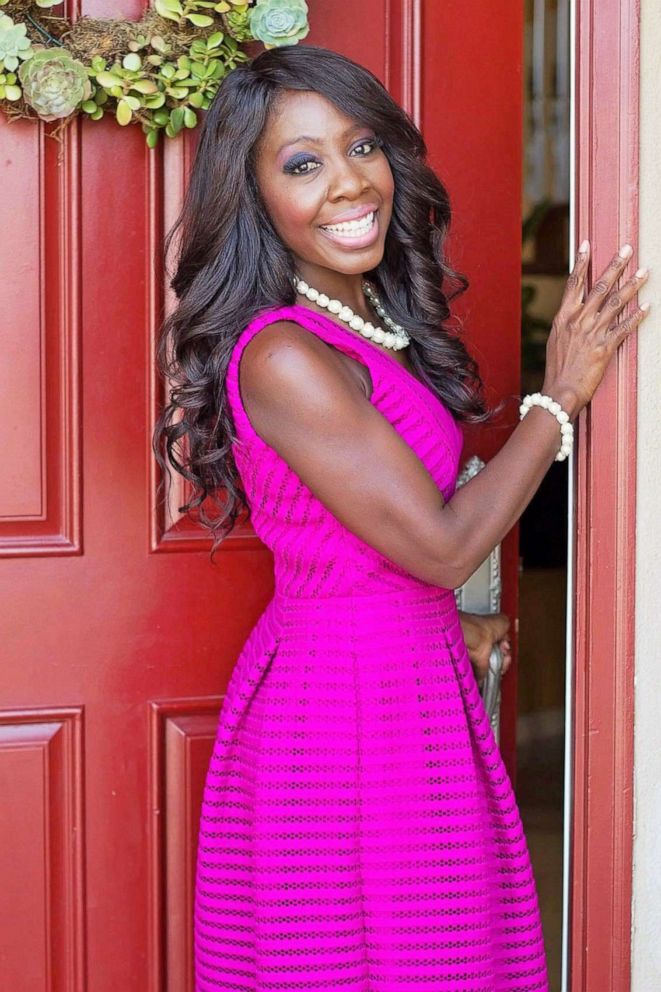 Courtesy Jacqueline Coronado
Elaine Swann is a lifestyle and etiquette expert, and the founder of The Swann School of Protocol.

Swann recommends being "very frank and honest" with family and friends if you plan to not give gifts and do not want to receive them.

MORE: Military families surprised by having their holiday layaways paid on 'GMA'

"Craft a statement that expresses your wishes and send that out through whatever means that you would normally communicate with the individuals -- maybe it's a text message or perhaps it's an email," she says. "'Hey family, this year, I decided to opt out of the gift exchange, so I will not be giving any gifts and I'd ask that you avoid sending me anything.' But then make sure that you use a statement that … ends on a nice high note and lets them know you're OK, and I think people will respect that."

Swann says it's best to avoid posting this type of message on social media accounts.

"Then you open yourself up to scrutiny, to questions, to having to explain yourself and then go into detail," she says. "Use that information privately and share it with … the folks who are going to give you a gift or who you would normally give one to. Just keep it private."

What to do if you plan to buy gifts

"Establish a budget and make a determination as to exactly how much you can spend on gifts this year," Swann says, emphasizing that it's important to "not put ourselves in a compromising position to try to over-give."

Instead of showering loved ones with gifts, Swann says other options could include purchasing one nicer gift for someone, or a few individuals, or finding something smaller and meaningful that can be given to several individuals.

"One of the things you can do is select a group of individuals that you'll give gifts to," Swann says. "Maybe you choose to give gifts to only all the children in your family. Or you might say this year, 'I'm going to focus on just the elder family members.' One suggestion might be all of the new moms or someone who just became a mom again."

Swann says you can consider a Secret Santa theme rather than a set dollar amount.

"The theme this year can be books, so everyone buys a book for someone and that's something that we know is going to under $30," she says. "Or if you have a group of friends that all love wine, maybe the theme is wine, so everybody exchanges a wine bottle, and you can really limit the pricing and be creative at the same time." 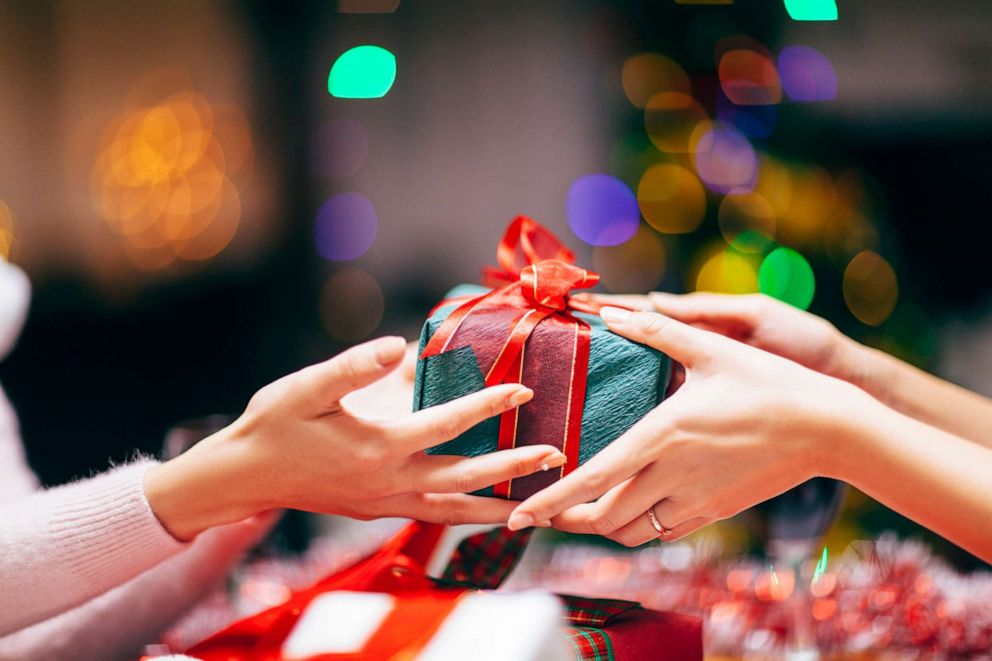 Secret Santa also affords an opportunity for collective gifts, Swann says. To buy a gift for your parents, for example, "you can gather all of your siblings together and everybody can pitch in. And you basically just put one person in charge to purchase the gift and … we can always use electronic payments so you don't have to go knocking door-to-door to get that money," she says.

Gift cards can also be a thoughtful option, Swann says, adding, "My recommendation is to make it a twofold gift: Give a gift card to a local restaurant or a local store so that this way, we're still going back into the community and supporting our local businesses." 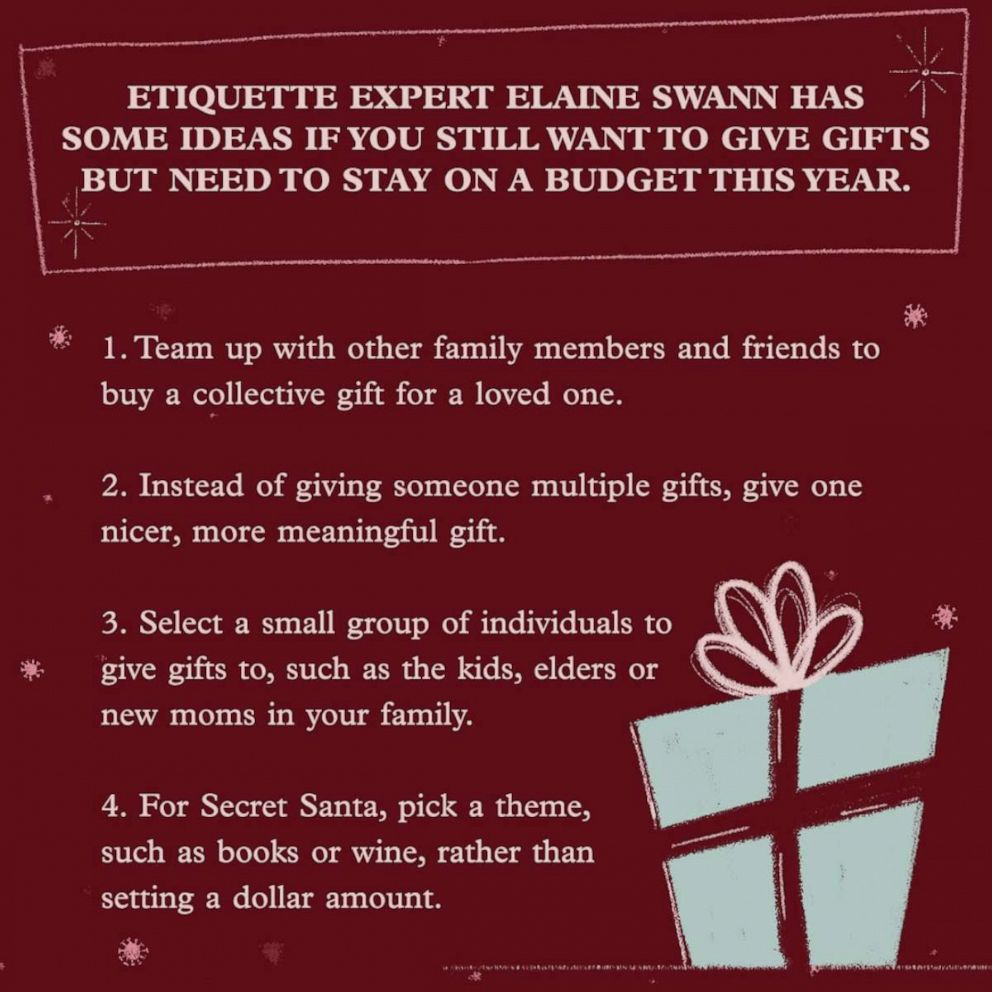 One gift that never goes out of style? Money.

"That's the one gift that people are definitely going to use," Swann says.

MORE: Millennial moms have Christmas all wrapped up: Here are their top tips for getting organized

Also important, she says, is to "be very, very thoughtful, and think deeply about the gift that you're giving a person and how it can enhance or positively impact their life."

"People have just really had a tough time this year. So we really should be thoughtful and not so frivolous -- running into the store and grabbing one of the first things that we think the person should have. Really think about what people want and what can impact them in a positive way."

What to do when you receive a gift

Even if you don't plan on giving gifts, you may have a friend or family member who will ignore your request and insist on asking you what you want so they can get you something. While you may feel hesitant, Swann says it's not worth arguing about and instead suggests having a few lower-priced items in mind.

"Maybe it's a book, or you can ask them to get you a gift card to Amazon, or something that you can use later on," she says.

MORE: The 4-gift rule and other parenting hacks for gift giving to the kids this holiday season

But whatever you do end up getting, Swann says to be sure to "accept it with graciousness." She also recommends sending a handwritten thank-you note, especially when they may have taken a risk going out to buy the gift or spent lots of time online looking for something you'd like.

"We're so overwhelmed with technology right now," Swann says. "To receive something in the mail and open it up and know that someone else has spent some time sending it to you, I think that really would enlighten individuals and make them feel appreciated."