In 1912, Willa and Charles Bruce bought land southwest of Los Angeles in Manhattan Beach to turn into a resort for African Americans to relax and unwind. They named it Bruce's Beach.

But nearby white property owners opposed Bruce's Beach. In 1924, the Manhattan Beach City Council voted to condemn Bruce's Beach and prohibited similar businesses in the area, with the city eventually using eminent domain to take the land and demolish the resort. 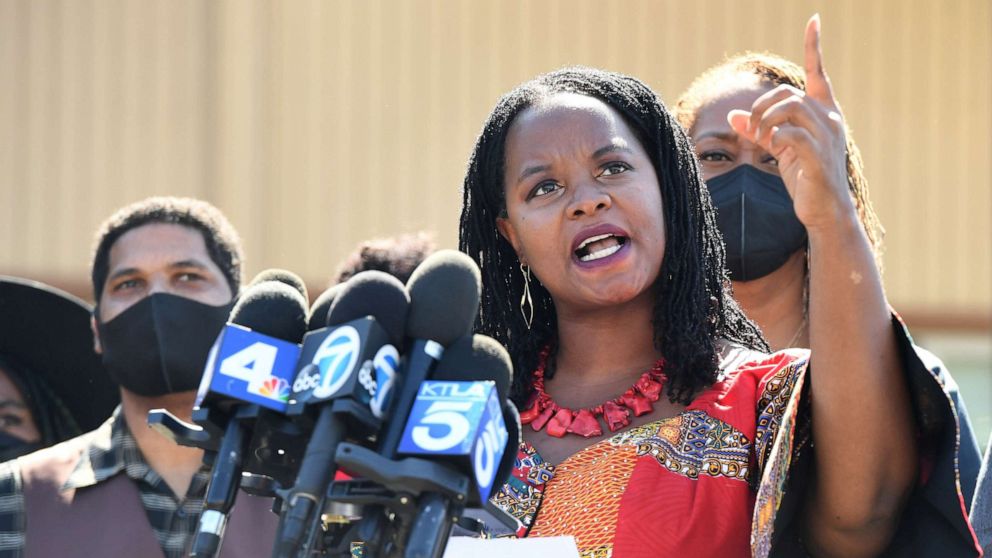 Former public policy lobbyist Kavon Ward started Justice for Bruce's Beach on Juneteenth in 2020. The following year, California Gov. Gavin Newsom signed legislation to return the land to the descendants of the Bruces. 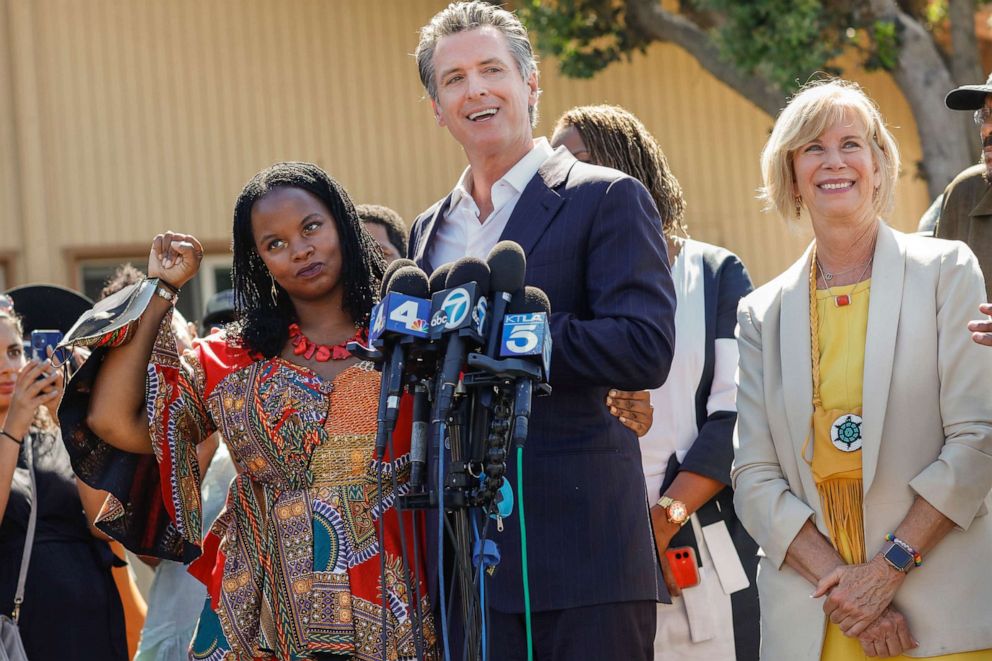 Jay L. Clendenin/Los Angeles Times via Getty Images, FILE
In this Sept. 3, 2021, file photo, activist Kavon Ward is recognized by Gov. Gavin Newsom, before he signed SB 796, authorizing the return of ocean-front land to the Bruce family, at a press conference at Bruce's Beach in Manhattan Beach, Calif.

"We use advocacy, research and technology -- ART -- to try to reclaim stolen Black land and/or restitution for the families who have been the victims of land pillage," Ward told "Good Morning America."

Veteran writer and communications strategist Ashanti Martin was emboldened by Ward's work and hearing about George Floyd's great-great-grandfather, who owned 500 acres of land before it was stolen by white farmers.

A mutual friend connected Martin to Ward, and together, they founded Where Is My Land in July 2021. The organization collects information about land that was stolen, the date it was stolen, the means by which it was stolen and much more. It has received more than 400 submissions, with more than 200 having enough evidence for them to move forward to the next stage.

"I kind of used my communications and data and tech background to think about how we can do this on a larger level," Martin said.

Rufus Burgess arrived in Coloma, California, with his enslaver during the Gold Rush in 1849. He gained his freedom and purchased farmland, where he and his descendants helped build a community, including a blacksmith shop and the Coloma Emmanuel Methodist Church.

In 1947, the land was seized by the state of California and now sits as Marshall Gold Discovery State Historic Park. His great-great grandson entrepreneur and fire battalion chief Jonathan Burgess says it was "an abuse of eminent domain policies."

MORE: This mom couldn't find traditional African-print clothing for her baby, so she started a company making her own

"The town was a secret to whites, so there were free Black people up throughout those hills," Burgess said. "What I envision is taking kids back there and getting the true history of that park. … There were orchards, so [I plan on] reinstating the orchards."

After years of trying to get his family's land back, Burgess was relieved to receive help from Where Is My Land.

"No government entity that I know thus far is going to come and tell anybody that, 'We have records about your land and your family. We took it,'" he said. "So to have a group like Where Is My Land -- and Ashanti and Kavon -- to bring the fight to policymakers is refreshing. It gives hope for our nation."

With the success of the Bruce family, Ward hopes Burgess will have the same outcome. 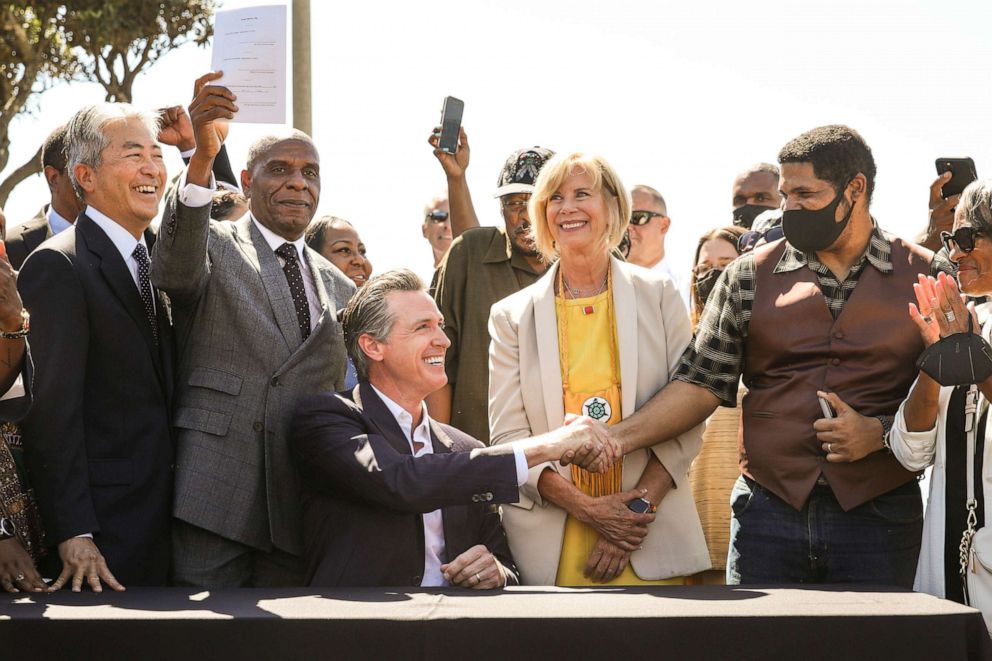 Jay L. Clendenin/Los Angeles Times via Getty Images, FILE
In this Sept. 30, 2021, file photo, Gov. Gavin Newsom shakes the hand of Anthony Bruce after signing the SB 796, authorizing the return of ocean-front land to the Bruce family, during a press conference at Bruce's Beach in Manhattan Beach, Calif.

"Now we incorporate all of these other Black land claims and hope that the governor does what he needs to do to ensure that land reclamation and restitution is not just for one family, but that it should be for all of the Black families in California," Ward said.

The Fight Has Just Begun

In order for progress to be made, Martin believes conversations need to be had about the long-term consequences of economic injustice.

"Right now, we're in a moment where we see so many institutions, and powerful bodies, entities and individuals … trying to paper over truths that people would rather not hear about, because they're difficult. They make them feel bad," Martin said.

"Not only do we have to acknowledge it historically, we have to acknowledge the impact that it has had on the present day, and it has on future generations because the wealth disparity is something that we talk about," she added. "I think that the role of stolen Black land is one that this country really hasn't even begun to explore."

Through this journey, Where Is My Land is prepared to help those 200 families because the end result is all the more rewarding.

"I feel like this work that we're doing is very much ancestor-driven," Ward said. "I think we need to remember that and just lean on counsel, the invisible counsel, the spiritual counsel of our ancestors so that we know what path to take and how to make sure that we are successful in reclaiming Black land."