When the coronavirus outbreak shuttered the city of South Bend's public schools in the spring, Dez-Jane Hall began connecting her second grade son to his virtual learning program, using links she had teachers send to her email, on her phone. But with two younger children to take care of at home, too, she found the transition difficult to manage.

"At first, it was very, very frustrating," she said.

In March, the Indiana family received a Chromebook from her son's elementary school, but with no broadband internet in their home, they had difficulty connecting via hotspots created by Hall's phone.

That's when Hall noticed a school bus regularly parked outside her door. The driver explained that the bus was providing Wi-Fi and gave her instructions on how to access it. 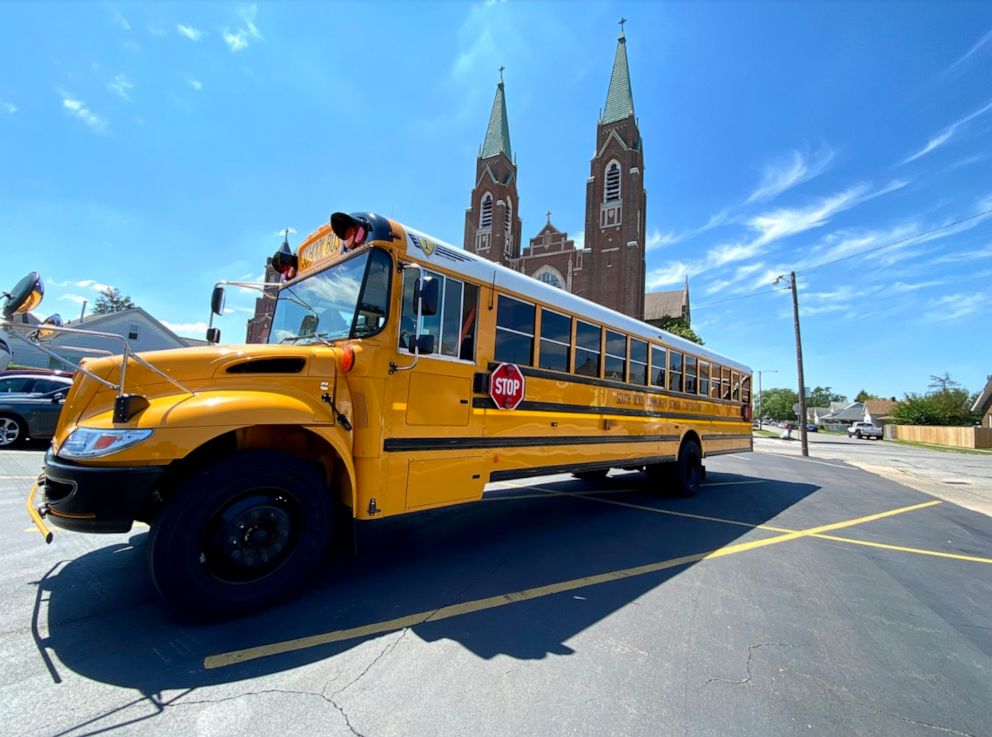 Ever since, Hall says, her son's schooling has been "easy breezy."

"He can actually go to his meetings on the computer with the classroom and his teacher," she said. "So for me, it's so much easier, and for him, he's able to actually see things his teacher is talking about."

When virtual learning started back up again last week in South Bend, the back-to-school transition was relatively seamless for Hall and her son, largely because they were already familiar and confident in their technology from the prior school year.

The bus Hall and her son can see outside their home is one of 35 deployed across South Bend, stationed outside apartment complexes, school buildings and parks to bring Wi-Fi to families who don't have it at home.

Rene Sanchez, assistant superintendent for operations in South Bend, said the idea of Wi-Fi school buses was actually a working project before the coronavirus outbreak hit, part of an original plan to allow students with long commute times and athletic events during school hours to utilize transit time.

As part of the project, some buses would also be deployed near families the district knew didn't have broadband access to the internet at home. A pilot of the project began with just 10 buses and the district was about to add another 10 to its "fleet" when the pandemic hit — making the buses no longer an innovative project but rather a visible lifeline to many across the district.

"We ordered as many more devices as we could," Sanchez said. "Now we're providing devices for pre-K all the way through [grade] 12."

On Aug. 12, 35 buses were deployed all over the city to provide internet to students Monday through Friday, 8 a.m. to 4 p.m. The access reaches within 300 feet without obstruction, and a Google map tells families where they're stationed.

Some families bring their own chairs, others drive up and stay in their cars, but many can stay in their homes. The school board has already approved funding to add another 14 buses to its fleet in the near future and, eventually, it hopes all 200 of the district's buses will be equipped with Wi-Fi.

Sanchez attributes the success of the buses to plans already in place to make the district more equitable before the pandemic hit. 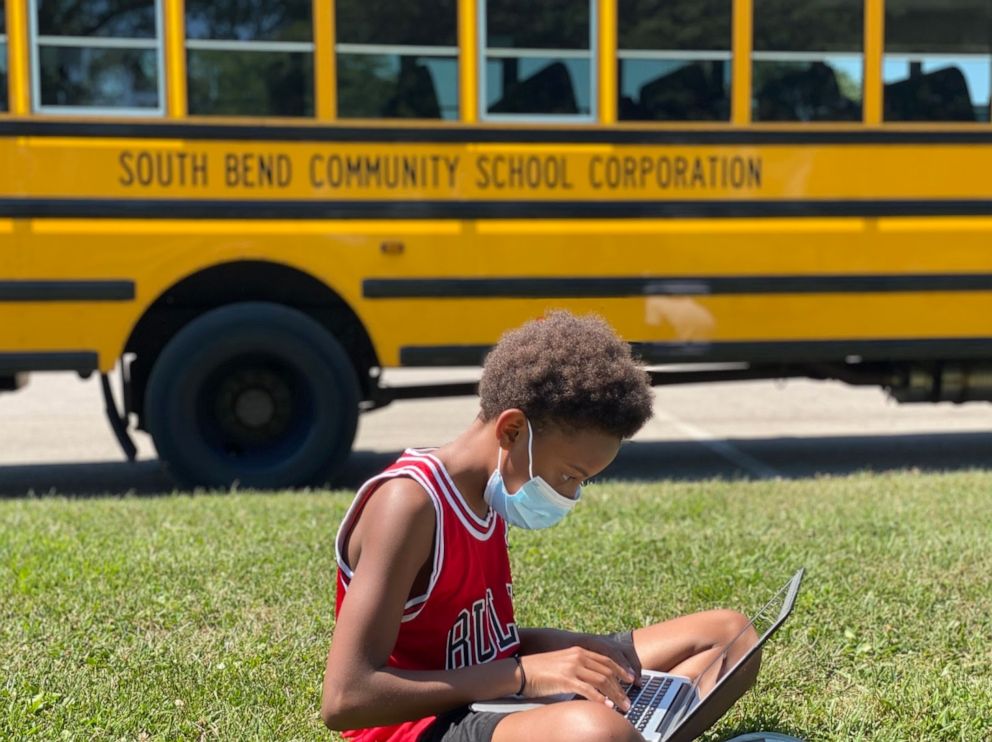 "We were doing it because we knew we had a need," he said. "We didn't know that we were going to have this level of need, but because we planned ahead -- and took into account that idea of equitable access -- then we were prepared."

According to Sanchez, roughly 30% of families in the district do not have broadband internet access at home.

Over his 25-year career in education, previously working as a teacher, a college counselor and a principal, Sanchez sees school buildings as much more than classrooms but also critical community hubs.

MORE: Parents taking kids' education into their own hands this fall

"When those social centers are not available, we still need to be able to provide those services for those students who are enrolled there," he said

And that, in part, comes with approaching the role of a school in education creatively.

"During these times, everything is a learning environment," he said. "It's no longer just a classroom, no longer just a school, and as a result we need to be prepared to serve all of our students."

South Bend is just one of many school districts across the country grappling with how to close what experts call the "digital divide" as many students are expected to "log on" to school over the next few weeks.

Austin, Texas, deployed 110 buses to provide Wi-Fi for students across the city. And in Charleston, South Carolina, the district increased the Wi-Fi output inside school buildings so that those living in proximity could use it, in addition to deploying 10 Wi-Fi buses across the city.

According to new Pew Research analysis, about 15% of U.S. households with children in school do not have high-speed internet connection at home. That statistic rises to 30% for students in low-income households, or an annual income below $30,000.

Thomas Dee, an economist and professor of education and faculty director of the John W. Gardner Center for Youth and Their Communities at Stanford University, applauds South Bend's approach to problems school districts across the country are facing right now.

"Based on what I've heard about the work they're doing ... this is a pretty uniquely innovative approach to the present crisis," Dee said. He characterizes the projective as an example in which "an innovative technological investment generated unanticipated benefits."

But while he's happy about this achievement, he's concerned about the long-term effect of virtual learning on this generation of students. 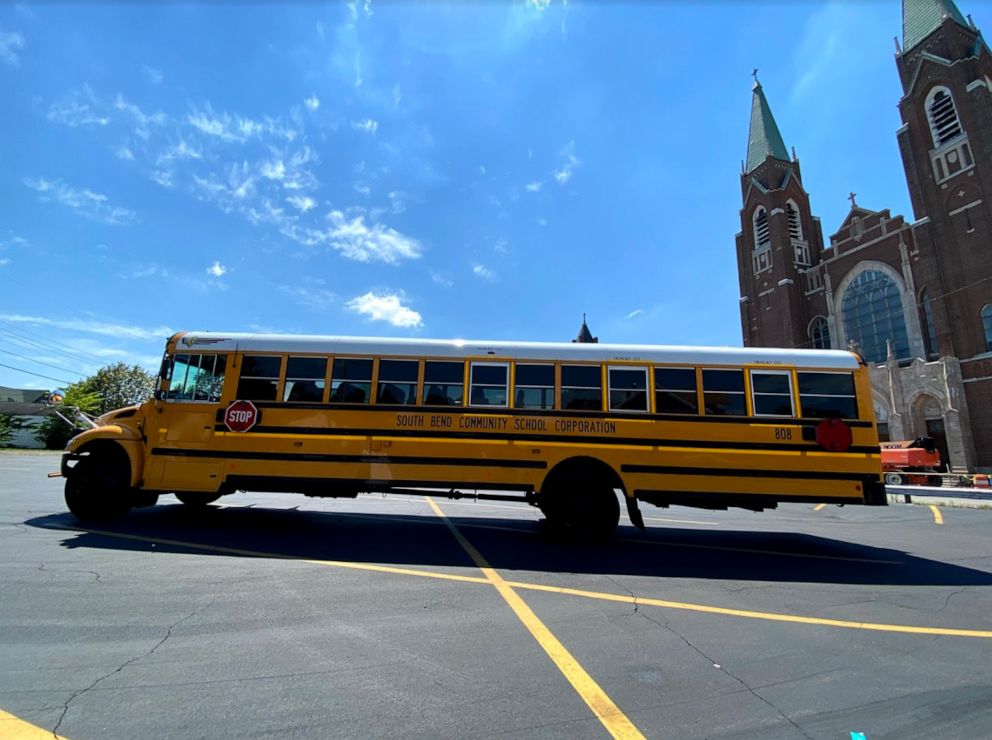 "What we've learned about virtual learning opportunities is they are generally inferior to in-class opportunities," he said, adding, "I want to stress I don't think that's a reason to take on the health risk of bringing kids back in the classroom."

Instead, he'd like to flag the long-term impact virtual education will have on many students and particularly students from low-income households.

"We should be thinking about tutoring opportunities, summer learning opportunities that would give kids the chance to catch up to where they would have been if this health crisis has never occurred," Dee said.

Dee also noted the difficult role parents are expected to assume while their children are virtual learning.

"There's a sense in which we're expecting parents to function almost as teacher aides now, as paraprofessionals in education," he said, explaining not all parents have the resources to do this.

"One thing that I think is important -- that perhaps we're not addressing enough is -- how can we better support parents as partners in sustaining the learning trajectories of children during this pandemic?"

Dez-Jane Hall knows her son misses the physical classroom and he misses seeing his friends on a regular basis. But she actually appreciates the way in which virtual learning gives her the opportunity to play a more active role in her son's education.

She appreciates that extra attention her son is now getting. When her son is struggling with something, she can spend time with him on it and feels comfortable connecting with her son's teacher over email or video-conferencing when she has questions about his assignments.

"I can actually see for myself when my son is struggling," she said. "I can't replace his teacher, though."