They say one man’s trash is another man’s treasure. One 31-year-old St. Louis man learned that in the sweetest way.

Matt Shoukry recently took to eBay to sell an old VCR he had laying around his house. When someone bought it, he boxed it up and sent it from St. Louis to Phoenix without thinking twice.

Shoukry was surprised when a few days after shipping off the VCR, he received a letter with his handwritten address on the envelope. He said he began to read the letter while playing a video game, but after reading the first few lines he had to pause it. Shoukry says he called his girlfriend over in disbelief to come read it with him.

The letter was from an 86-year-old man in Phoenix who bought the VCR from Shoukry, who must have gotten Shoukry’s return address from the label on the eBay package. In his writing, he told Shoukry he went to eBay for the first time to find a VCR and thanked him that it was such in such great shape and worked perfectly.

It was in the next few lines that Shoukry realized he had sold much more than a VCR to this 86-year-old man -- he sold him a trip down memory lane. 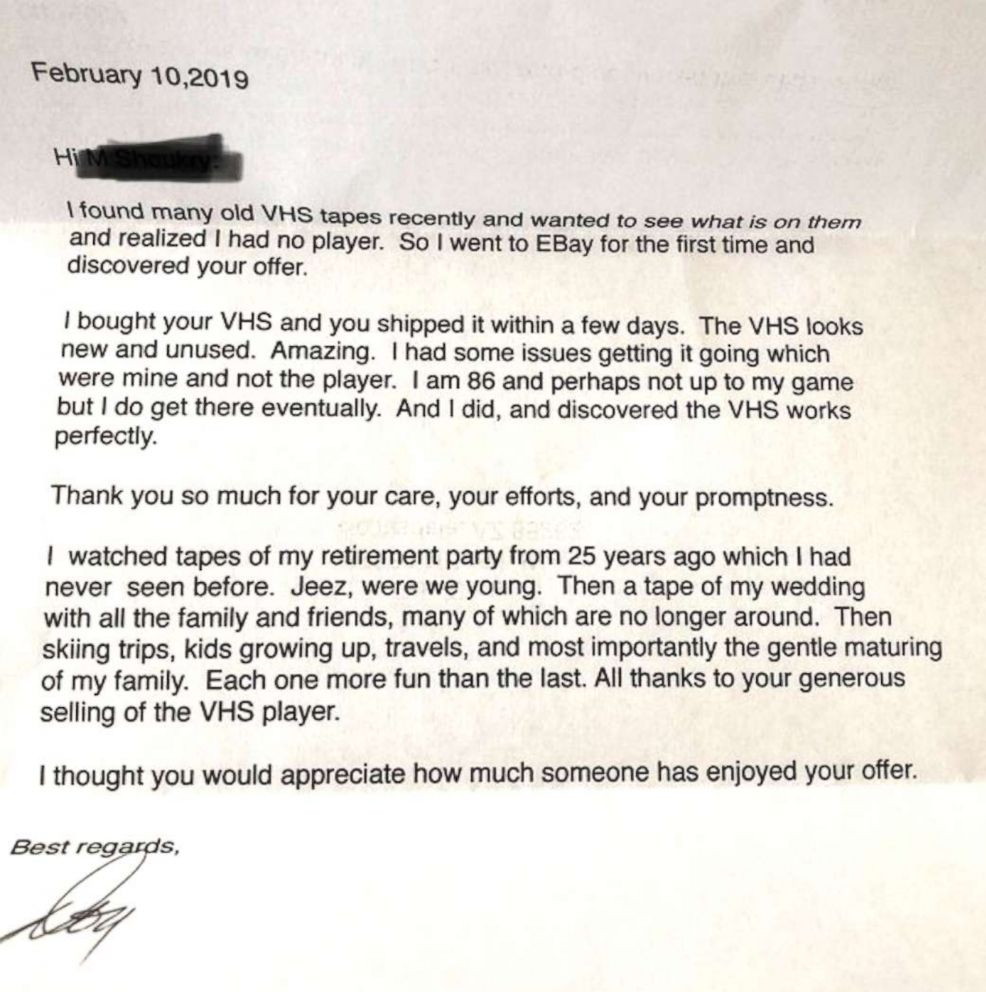 Courtesy Matt Shoukry
Matt Shoukry received this letter in the mail after selling his VCR on eBay.

“I watched tapes of my retirement party from 25 years ago which I had never seen before,” the man wrote. “Then a tape of my wedding with all the family and friends, many of which are no longer around. Then skiing trips, kids growing up, travels, and most importantly the gentle maturing of my family. Each one more fun than the last.”

The man signed the letter simply, “I thought you would appreciate how much someone has enjoyed your offer.”

Shoukry said he and his girlfriend sat on the couch reading the letter over and over again, both of them holding back tears.

Shoukry said he put the letter on his Reddit page, and has been blown away by people’s reactions to the letter he received.

Shoukry says he plans to write the man back to tell him the impact his letter had not only on him, but on thousands of people online.

Whether it be an old VCR or a simple letter, you truly never know what a big impact a small gesture can make on another person.