Most everyone by now -- especially if you have Netflix -- knows the basics of Marie Kondo's method of "Tidying Up," the name of the Japanese organizer's hit Netflix show: you only keep items in your home that spark joy and you make sure every item has a place in your home.

What is less known is how easy, or not easy, it is to keep Kondo's organization method going. If you go through your house and get rid of everything that does not spark joy, does it end up being filled with junk again just weeks later?

The answer, according to three families who appeared on "Tidying Up," is a resounding no.

(MORE: Jennifer Garner uses the Marie Kondo method of tidying up to see what 'sparks joy' in an Instagram post)

All three families "Good Morning America" spoke with described Kondo's method as life-changing. That is how Kondo too describes her method in her book, “The Life-Changing Magic of Tidying Up: The Japanese Art of Decluttering and Organizing.”

The "Tidying Up" families who were helped by Kondo opened their homes to "GMA" to show how they have been faring since they've had to do Kondo's method on their own.

(MORE: We asked Marie Kondo to fold a bag of potato chips and other random stuff)

The widow going through her husband's items

Margie Hodges's episode of "Tidying Up" was the most emotional as she tried to organize her home after the death of her husband.

The Culver City, California, woman had a clean home but certain rooms and closets were stuffed to the brim and ready to burst. 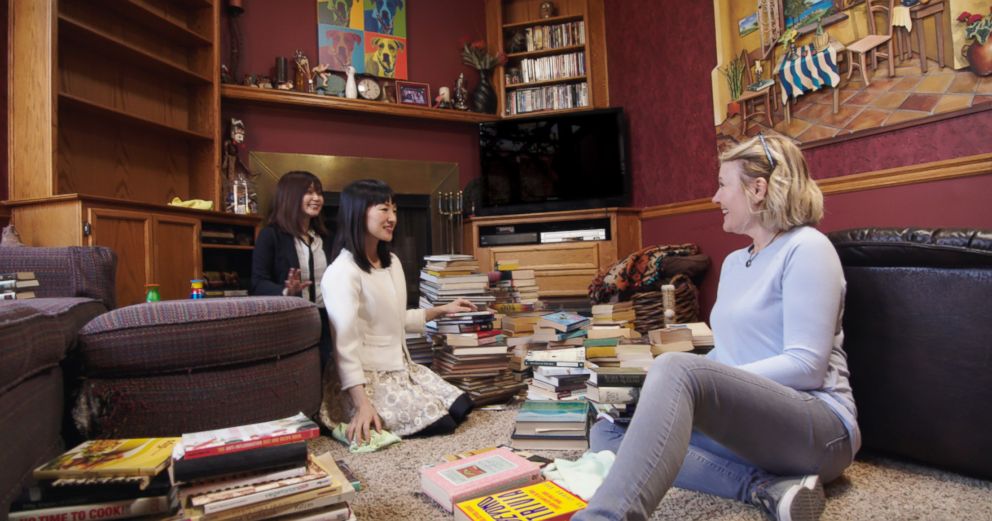 Netflix
Marie Kondo and Margie Hodges appear on an episode of the Netflix series, "Tidying Up with Marie Kondo."

Hodges, a mother of three and new grandmother, filmed with Kondo from March of last year through mid-June. Nearly one year after Kondo helped her, Hodges said she has "held my own" in sticking to Kondo's method, even joking, "It's too much work not to." 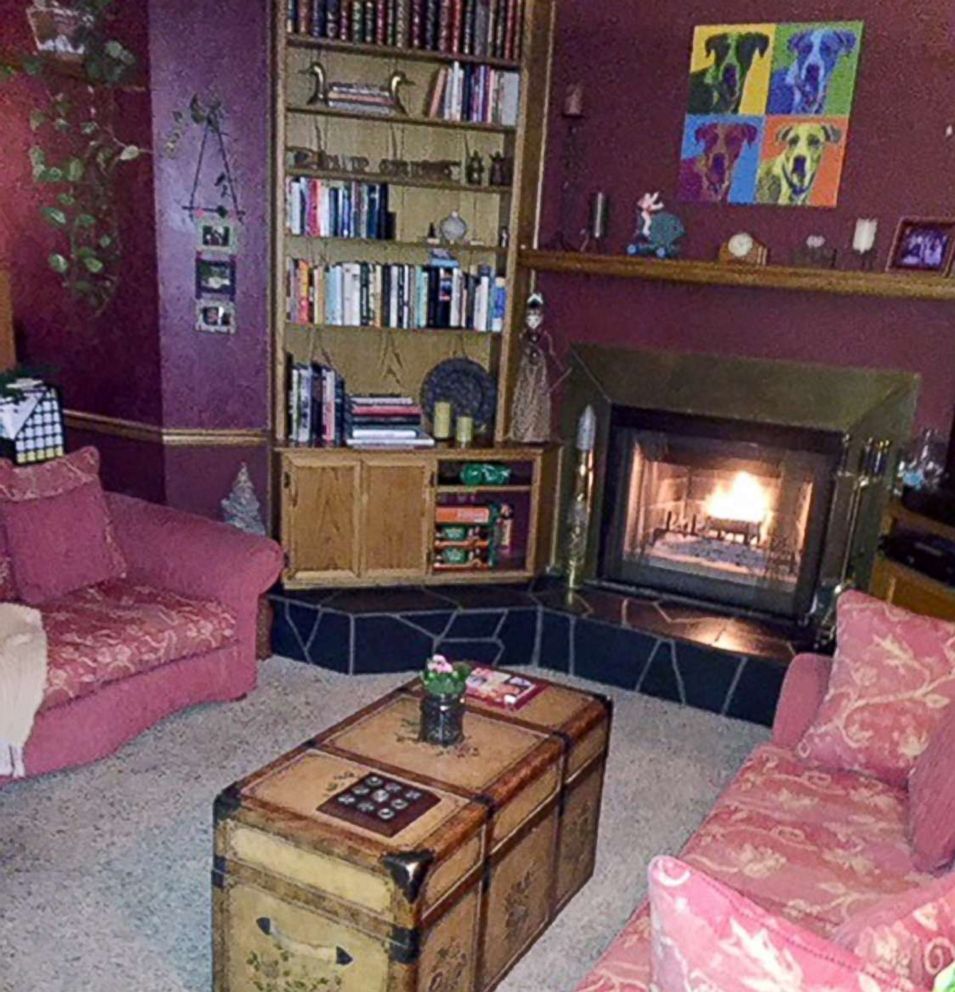 Courtesy Margie Hodges
The den in Margie Hodges' California home is pictured after she appeared on "Tidying Up."

"I was thinking of how much money people spend on a vacation to get away from it all, but if you want to make a life-altering change, rather than a week in Mexico, where you come home and have it all to deal with still, to have your house organized like I did, it’s life-altering," Hodges said.

"I’ve learned to appreciate what it means to have an item spark joy, that feeling," she added. "The whole house feels a little lighter."

Hodges' famous room where Kondo rolled on the carpet once it was freed from an avalanche of stuff is now a beautiful craft room.

She has also redone a bathroom that viewers saw on "Tidying Up." 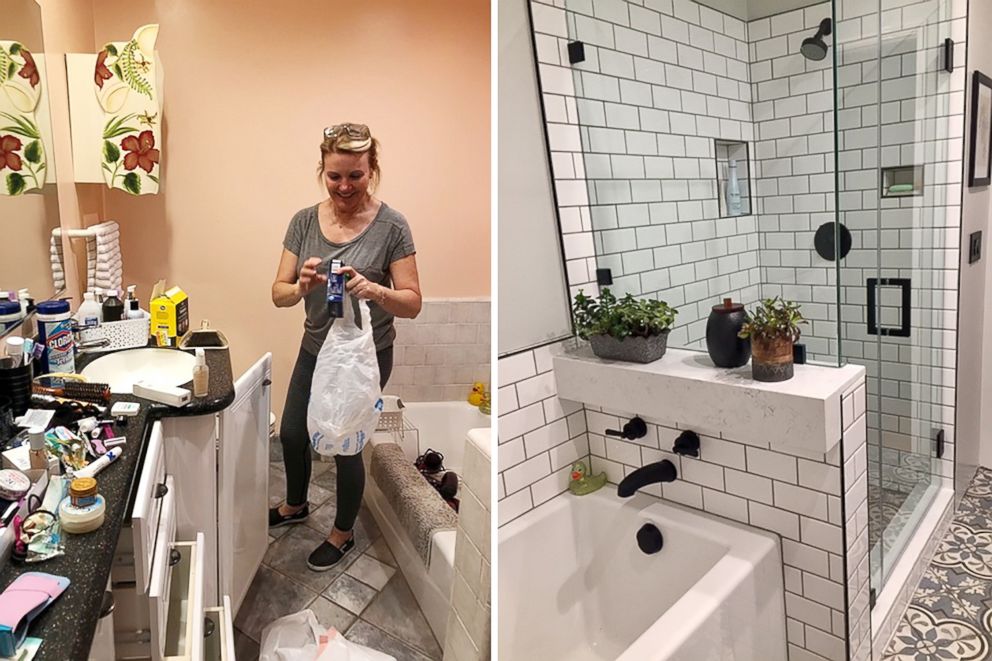 Courtesy Margie Hodges/Netflix
A bathroom in Margie Hodges' California home is pictured before, left, and after she appeared on "Tidying Up" on Netflix.

Hodges, like the other two families "GMA" spoke with, had not heard of Marie Kondo or her tidying method before filming. She stressed how time-consuming and stressful the "Tidying Up" process was, noting that producers probably have enough extra footage of her for another series. 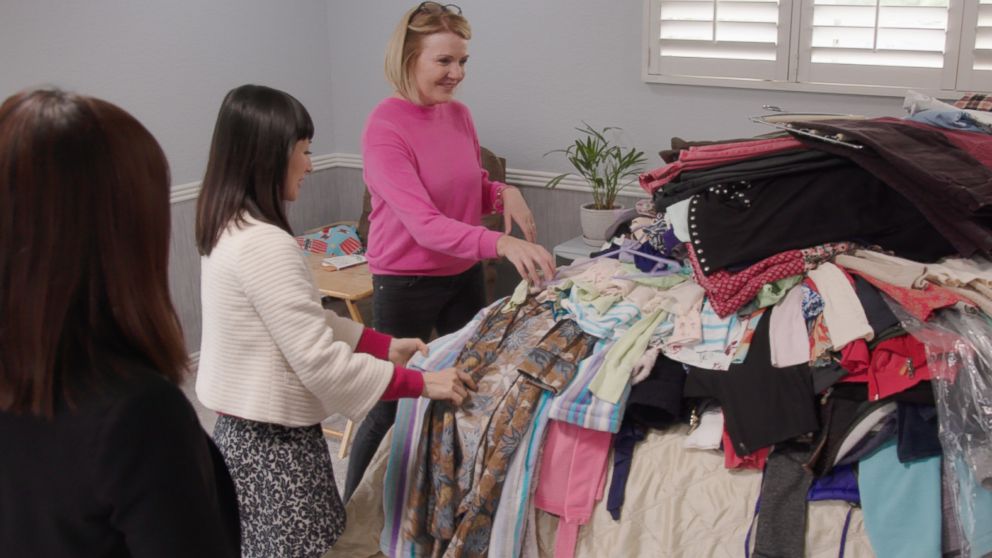 Netflix
Marie Kondo and Margie Hodges appear on an episode of the Netflix series, "Tidying Up with Marie Kondo."

She is taking a break now before tackling another room "Tidying Up" viewers saw, her husband's office.

"I have so much more to do but I had to take a break from the cleaning out part of it just to do the fun decorating part of it that I hadn’t had time or money to do before," she said. "They sort of portrayed the idea that I was having a hard time going through [my husband's] clothing, but I just hadn't had time to do it. I’m going to have more of that feeling with all the sentimental items in his office."

The family where only the mom knew where things were

Douglas and Katrina Mersier and their two children faced a dilemma similar to many families. They had a lot of stuff crammed in a small space and only Katrina knew where everything was. 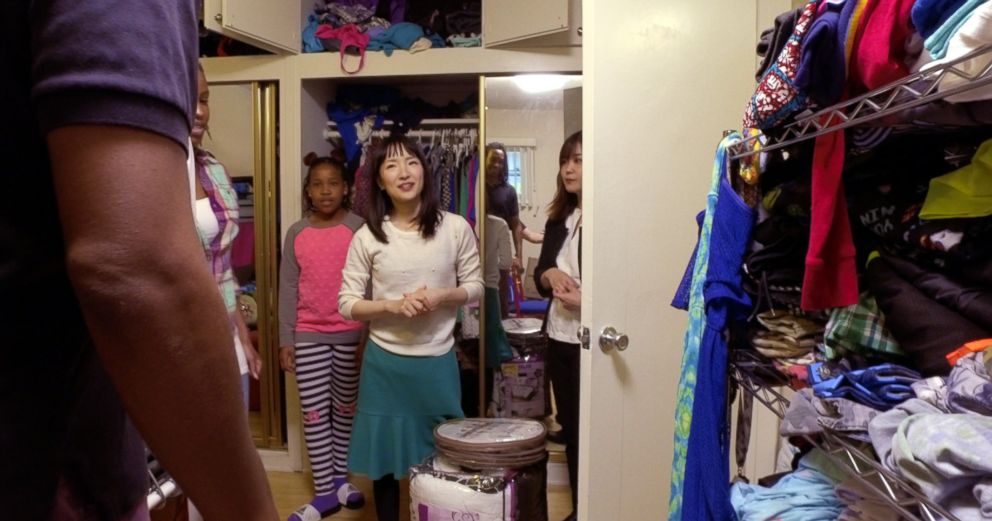 Netflix
Marie Kondo meets with the Mersier family on an episode of the Netflix series, "Tidying Up with Marie Kondo."

One year after Kondo visited their Los Angeles apartment, the Mersiers describe her as a life-changing angel.

She is an angel.

"I wish they would give us a whole six hours just to show what she did for us," Douglas said. "She is an angel."

The Mersiers have continued with Kondo's method of folding their clothes, thanking items for their service when they let them go and continually asking themselves what sparks joy.

"We kind of all check each other," Katrina said. "We keep a [donation] box nearby so we can say, 'Alright, I woke up today, I put this on [it doesn’t spark joy], I express gratitude for it and what it used to do and I'm ready to keep it moving on.'" 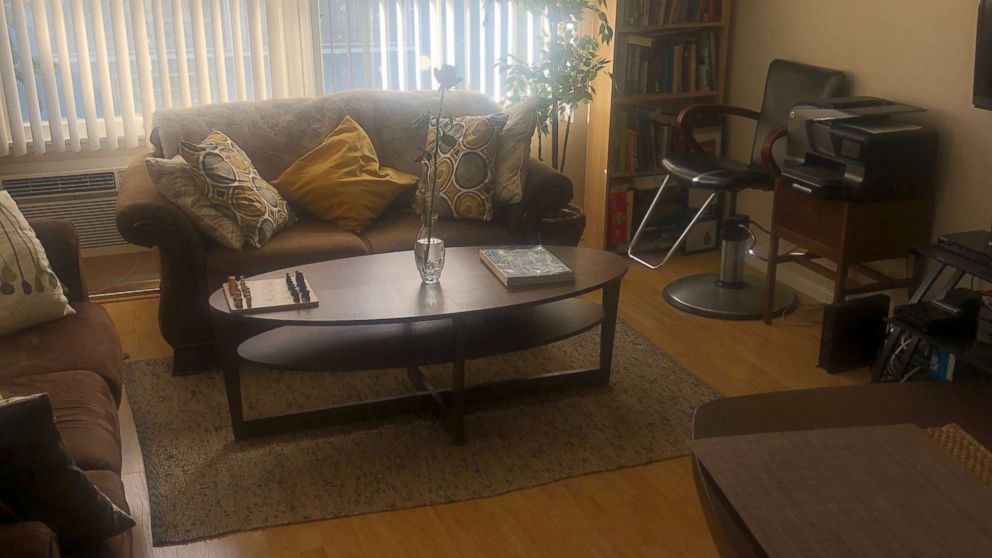 "We definitely shop differently," she added. "I always take my kids shopping with me now, where I used to always go by myself. But they have to pick [clothing] out so they’ll feel connected to it."

The Mersiers have extended the "spark joy" philosophy to their lives too. The kids have dropped extracurricular activities they didn't find joy in and Katrina has changed jobs twice and gone back to school.

The family even thinks about what foods spark joy for them as they work to "tidy up" their diets. 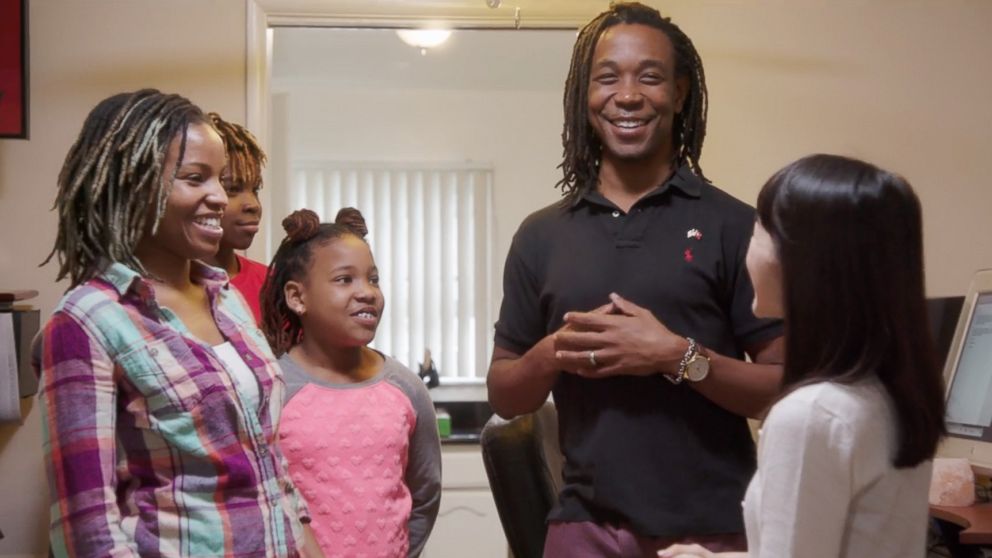 Netflix
Marie Kondo meets with the Mersier family on an episode of the Netflix series, "Tidying Up with Marie Kondo."

I don’t even think we use the word chores anymore.

"It becomes a life view," Katrina said. "The less there is, the easier it is to manage. Instead of being a burden to manage, it’s a joy."

"We can spend more time now planning out fun stuff for the weekend instead of spending the weekend doing chores. I don’t even think we use the word chores anymore," she said.

The family who hated doing laundry

Rachel and Kevin Friend and their two young children met Kondo last August when she appeared at their Long Beach, California, home to shoot "Tidying Up."

The family revealed on the show that they outsourced their laundry, an issue that was a major point of contention between husband and wife. 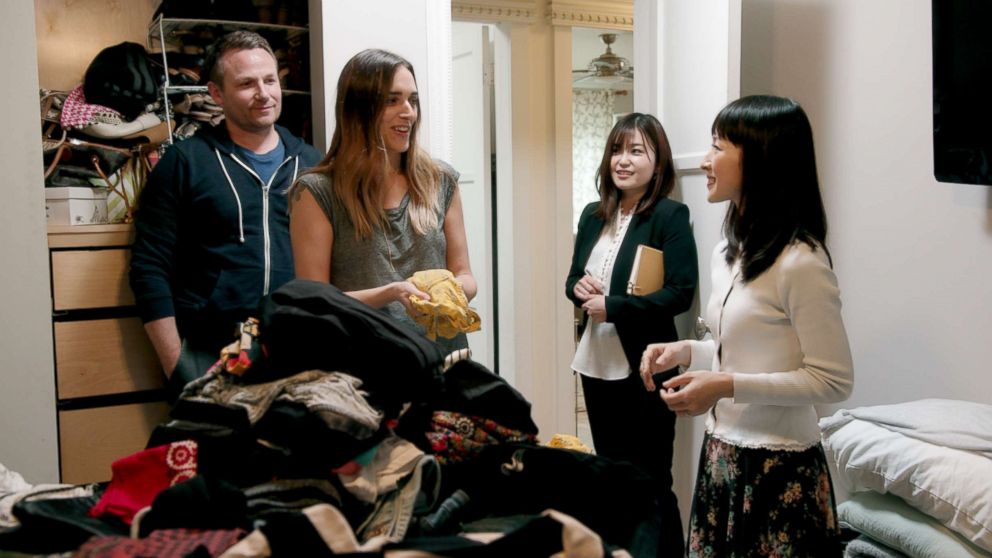 Courtesy of Netflix
Kevin Friend and Rachel Friend in "Tidying Up with Marie Kondo."

Six months after Kondo left their home, their lives have changed.

“The biggest shock to me was how Rachel went from hating doing laundry to having no problem with it,” said Kevin. “We have conversations [while we fold], we’ll watch a show together. It’s not such a daunting task after all.”

What has made laundry, and nearly every other task in their lives, less stressful and daunting is that everything has a place to return to in their home, according to both spouses.

"There is a misnomer that [Marie Kondo's method] is about keeping the house clean," Kevin said. "It’s never about that. We have kids. The house gets messy all the time, but everything is organized and has a place."

(MORE: Why this mom says Marie Kondo's decluttering methods are for 'privileged' people)

The couple said cleaning out their closets has actually expanded their wardrobes because now they are able to see all the items in their closets. 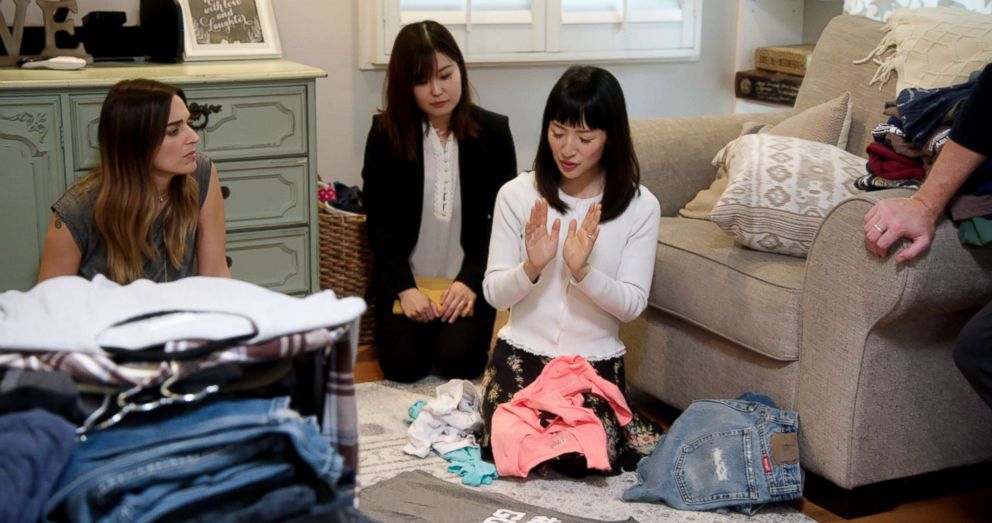 Courtesy of Netflix
Rachel Friend in "Tidying Up with Marie Kondo."

Kondo's most famous organizing trick, the KonMari folding method in which you fold clothes in halfs or thirds, has been the "easiest" to keep up, according to both Kevin and Rachel. 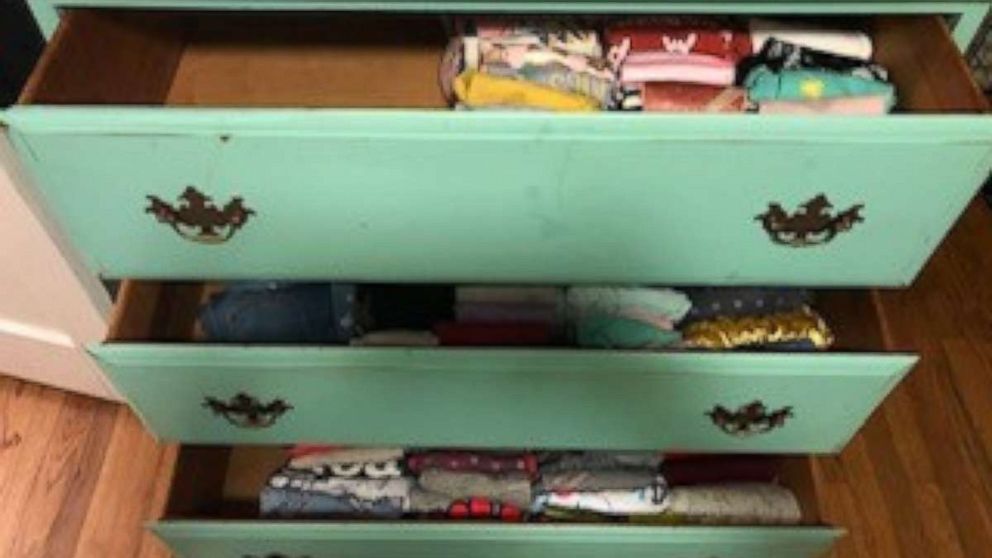 The Friends have also continued Kondo's method of thanking each item in their home for its service.

"We’re more mindful all around," said Rachel, who started an online business with the space in her life she said was created by Kondo's method. "We couldn't experience joy with the people in our lives when we were thinking about the house and all we had to do."