A private school in Milwaukee is facing a lawsuit from two of its most famous parents.

Craig Robinson, the brother of former first lady Michelle Obama, and his wife, Kelly Robinson, are suing the University School of Milwaukee, alleging it expelled their two young sons after raising concerns about racial and socio-economic bias at the school.

The Robinsons, who live in Milwaukee, enrolled their two children -- an 11-year-old and a 9-year-old -- in USM, a pre-kindergarten through 12th grade school, in 2016. The school expelled their older child in April 2021 and then their younger son in June 2021, which eventually led to the couple suing USM on Monday.

"We're moving forward with this for a couple of reasons. We want to hold University School of Milwaukee accountable not just to our two children who they retaliated against, but more importantly, there's a whole community of people who are out there that we wouldn't feel right if this happened moving forward," Craig Robinson said. "The third reason is, this needs to stop and change and this will help all students at the University School of Milwaukee."

The school's reasoning for both children's dismissal, according to a letter it sent the couple, was because the Robinsons had "not fulfilled the foregoing commitments as a partner to USM and its Middle School teachers and administrators."

But Craig and Kelly Robinson say in the lawsuit it's because of prior conversations they had with school administrators about racial and ethnic stereotypes in virtual classroom assignments.

The Robinsons said they started noticing issues in their kids' classroom assignments during the COVID-19 pandemic. In the lawsuit, the couple said they had "communicated to USM their concerns about USM's failure to provide the 'supportive, inclusive' learning environment that was promised in the enrollment contract, the USM Middle School Handbook, USM's Common Trust."

Furthermore, the couple alleges in the suit that USM "acted toward its model students of color with none of the respect, trust, honesty, fairness or even the basic kindness, mandated by the Common Trust."

Craig and Kelly Robinson said they also recalled a time when their students were denied the chance to test out of a math class, but only white students were able to take the exam, according to the suit.

"As a lot of parents, we heard what was going on in the classroom because of COVID and there were repeated use of racial and ethnic stereotypes that were in actual assignments," Craig Robinson said. "The use of the word plantation and things of that nature. In addition to the racial and ethnic stereotypes, there was an insensitivity to socioeconomic status and as well as a disregard for the children who weren't physically in the classroom."

He added that their initial response was to "have a communication with them and give them some suggestions" but that it was "summarily dismissed."

Allegations of a broader pattern, extending over many years

During the 2020-2021 school year, the Robinsons raised concerns about USM's treatment of its students of color and underrepresented students. According to the lawsuit, "the Robinsons communicated directly with USM faculty and staff about the inclusion of language in various worksheets and projects that was offensive to persons of color, persons with disabilities, indigenous Americans and other underrepresented students."

Kelly Robinson also submitted two separate bias incident reports in January and March 2021 that outlined her and her husband's concerns about classwork that contained socioeconomic insensitivities, the couple says in the suit.

"The first bias that we noticed I did put a report in and was told that the reporting system was not working," she told "GMA." "The head of school told me that this was not a bias -- Each other time following when any bias was reported, instead of acknowledging and working to make it better, they ended up dismissing our students." 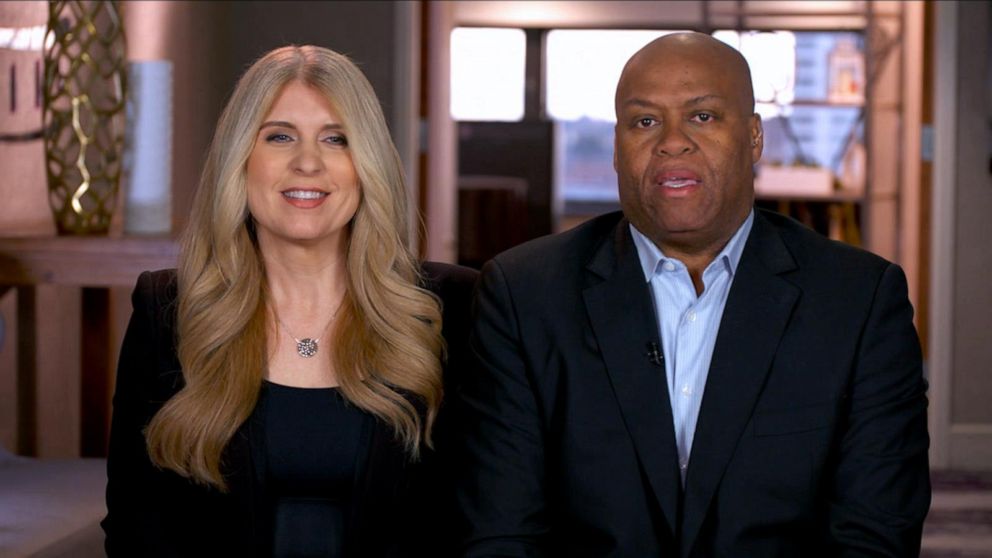 The suit claims that the school took no action to respond to the reports and instead terminated their sons' enrollment at USM, claiming in a letter they wrote to the couple that the Robinsons had "repeatedly engaged in disrespectful and demanding communications with and about our teachers and administrators."

In a April 22 email sent from Head of School Steve Hancock to the USM community and obtained by ABC News, Hancock said the school is “fully prepared to vigorously defend itself against the allegations made in the family’s lawsuit, as well as misinformation this family has spread in the media.”

Hancock said the children’s dismissal was “based entirely on the parents’ decision to repeatedly engage in disrespectful, demanding, and bullying conduct toward and relating to our teachers and administrators," which violated the school’s mission and code of conduct, the letter read.

Hancock went on to say the family "badly mischaracterized" three worksheets used last year in some of the school's fifth grade classrooms, and said that "we did not find the material to be of concern and shared this directly with the family."

While the Robinsons have expressed their experience with the school, they say that the issues that they've seen are part of a broader pattern that has extended over many years.

In addition to the alleged racial slurs used by white students, that USM was made aware of over the past two years, one school activity, according to the suit, dubbed "Underground Railroad," was also flagged as a concern by the parents.

According to the lawsuit, the "Underground Railroad" was a simulation in which students of color were told to act like "runaway slaves" while USM faculty acted as "slave catchers." The program was discontinued only after multiple students of color, USM parents, Black alumni and others protested its insensitivity, the couple said in the suit.

"Just as recently as 10 years ago, the University School of Milwaukee had in their fourth-grade curriculum that students reenacted the underground railroad. And students dressed up as slaves and ran through the school in the dark and the teachers were actually the slave masters who captured these students," Kelly Robinson said.

She added that "hearing these stories and understanding the pain that other families have gone through are one of the reasons why we wanted to come forward with this story."

In USM’s letter to parents, Hancock said the simulation "ended more than ten years ago—long before the family’s students began their enrollment at the school."

"As we did then, we will continue to evaluate and evolve our curriculum in a way that is culturally responsive and respectful," Hancock continued.

'This is more about accountability than it is about money'

Now, the couple says they hope that their lawsuit will put pressure on the school to create a more inclusive and diverse environment, according to the suit.