A single mom who moved her family from New Orleans to Houston after the devastation of Hurricane Katrina celebrated her son's graduation from Baylor University by holding a commencement ceremony in her backyard.

Ayanna Tatum brought together a stage, a Baylor University banner, a microphone and a small group of family and friends in just a few days in order to give her son, Derrick Williams, a graduation ceremony after his was canceled due to the coronavirus pandemic.

"I wanted to do anything to get him remotely close to a ceremony," Tatum, who also has a 19-year-old daughter, told "Good Morning America." "He's just an amazing kid." 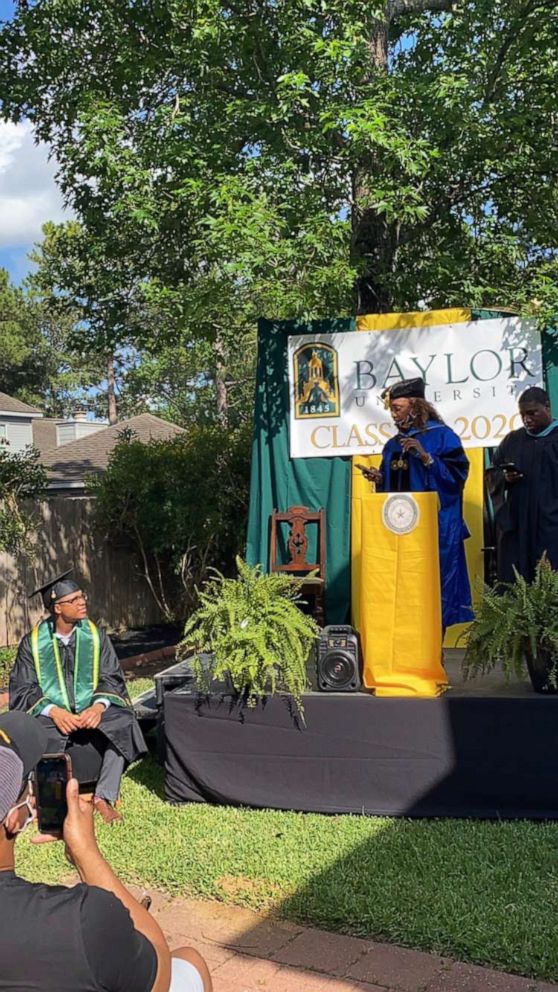 Tatum, a middle school teacher, was a single mom trying to finish college herself in her native New Orleans when Hurricane Katrina decimated the city in 2005. Tatum moved her family away from New Orleans after the storm and chose to settle in Houston because she thought that was where her two children could get the best educations.

MORE: 13-year-old earns 4 associate degrees and is youngest to graduate from Fullerton College

She finished her own college degree virtually and, 15 years later, was planning a trip to Waco, Texas, this month to watch her son, Williams, 22, graduate from Baylor University with a psychology degree.

"I rented an Airbnb because I wanted my family to come," Tatum said about her plans. "I had a dinner already planned and reserved."

Williams had already picked up his graduation cap and gown when Baylor decided to cancel its graduation and instead show graduates' names on the scoreboard of the university's football stadium. 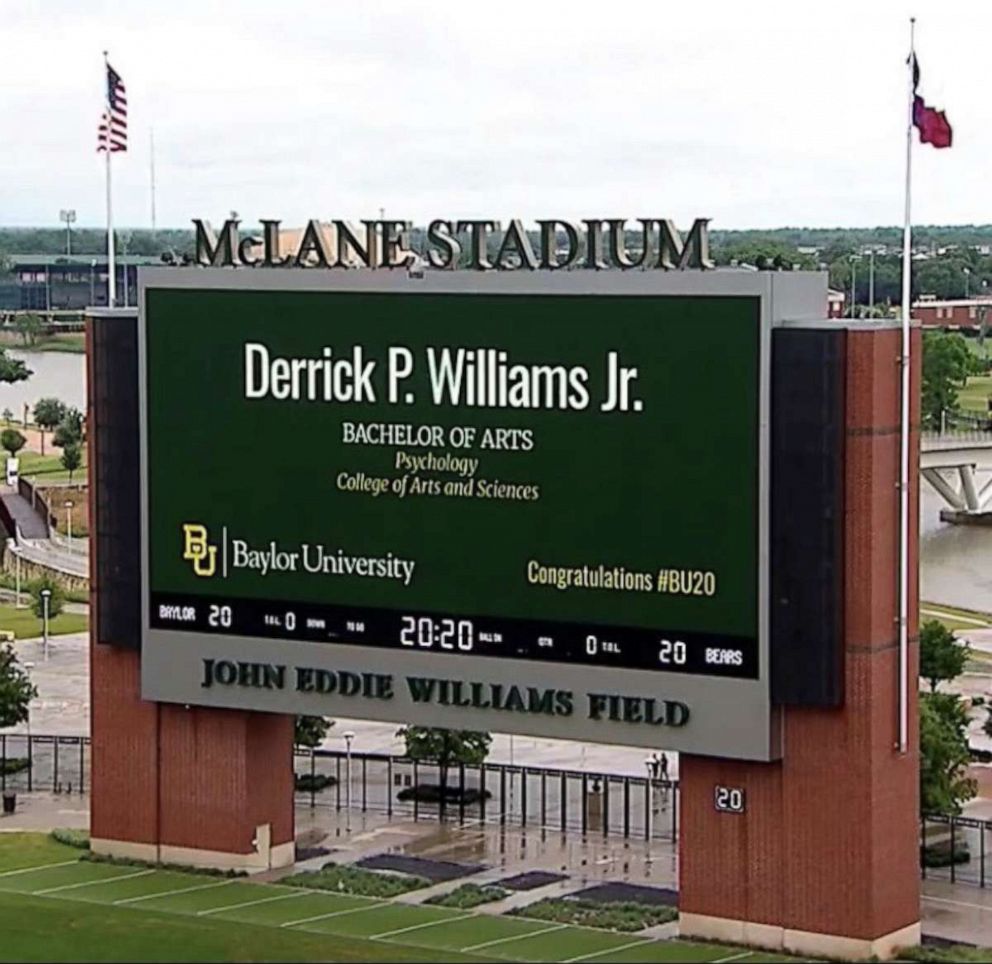 Courtesy Ayanna Tatum
Derrick Williams' name is seen on at the Baylor University football stadium to mark his 2020 graduation.

Tatum responded by planning a dinner for Williams at home, but then was inspired to do more when her daughter showed her photos on Facebook of another parent creating a graduation at home for their child.

She jumped into action and in just a matter of days turned the backyard of her Houston home into a mini replica of the Baylor University graduation stage. 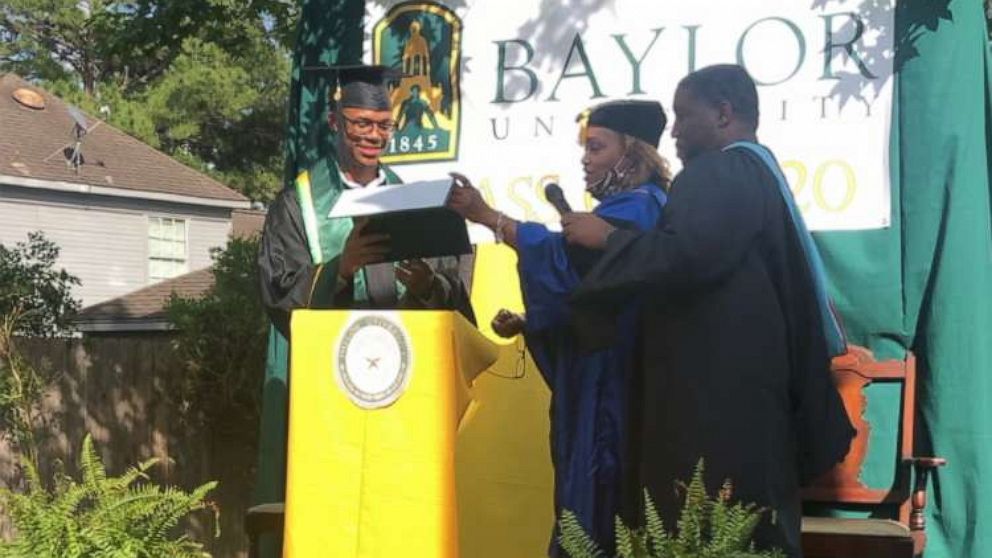 On May 23, Williams thought he was going over to his mom's house for lunch, but instead was surprised with a commencement ceremony.

"I pulled up and saw all of the decorations in the front of the house and saw people moving a stage in the back," Williams told "GMA." "At the time I didn't put two and two together, that it would be used for a ceremony, but I started eyeing my mom, like, 'What's going on?', and she just smiled."

Tatum had arranged for Williams' middle school assistant principal, a family friend, to join her on the stage for the ceremony. She served as the master of ceremony and commencement speaker and even conferred on her son a special quarantine diploma that featured a picture of toilet paper -- a hot commodity during the pandemic -- as the seal.

"I wanted to make it as realistic as possible so I told him, 'Your last name begins with a 'W,' so it's going to be a while before you're called,'" said Tatum, with a laugh. "And at the end I screamed like I was in arena, like I would have done if I was at Baylor."

Tatum said her mother, Williams' grandmother, helped raise Williams and was his "biggest cheerleader." She passed away last year and the at-home commencement ceremony helped the family feel like she was there with them too celebrating Williams' accomplishment, according to Tatum.

"We've had some grieving that she wouldn't be [at his graduation]," said Tatum. "She was over the top like [the at-home ceremony] so I feel like I honored her well."

Williams is headed in the fall to medical school at the University of Houston, his first choice for medical school, where he plans to study to become an orthopedic surgeon. 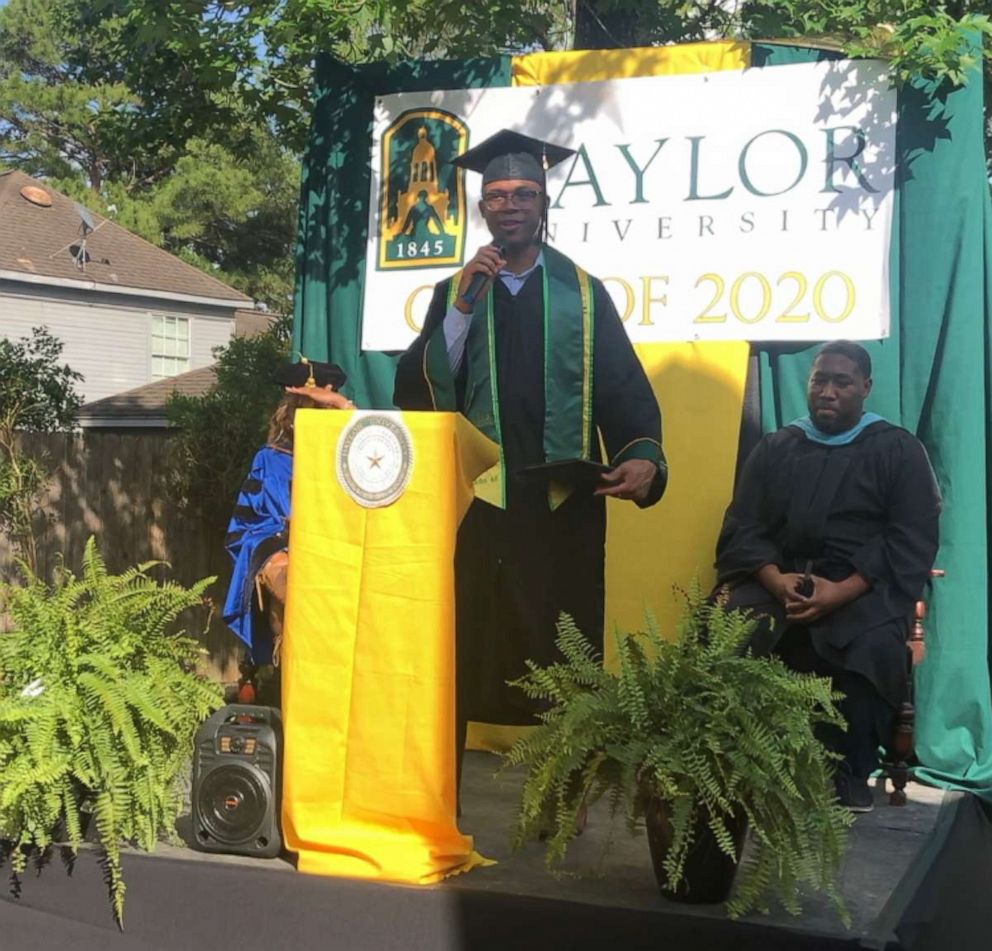 "He graduated from high school in June 2016 and that same month he asked me to buy him an MCAT [Medical College Admission Test] study guide and since then he was always studying," Tatum said of her son, who has a YouTube channel where he shares tips for pre-med students. "When you see it pay off and come together, that's an excitement you can't describe."