A teacher in Florida said she received an outpouring of donations of school supplies after sharing a video showing her bare classroom just before the start of the school year.

Megan, a public school teacher who asked that her last name not be used, said she took the past nearly six years off of teaching in order to raise her two children, and returned as a full-time teacher this year.

When she stopped by her classroom in July to see how it looked, Megan said she was devastated.

"When I decided I was going to back into teaching, I wanted to see what the class had before I spent a ton of money I didn’t have on it," Megan, told "Good Morning America." "When I walked in and saw it, I left in tears. I was supposed to have it ready for kindergarten camp in a week or so."

Megan said she took the video of her classroom so that she could show it to her mom, whom she said spent nearly $1,000 to outfit the first classroom she taught in out of college, in 2014.

She then decided to share it on TikTok, in hopes, she said, of bringing awareness to the work that teachers put into their classrooms.

"So frustrated going into my classroom today. No shelves for a classroom library. The desks are weird for a Kindergarten class.. No cabinets. No rug. No left over supplies or books. How much of my own money am i expected to spend?," Megan captioned the video. 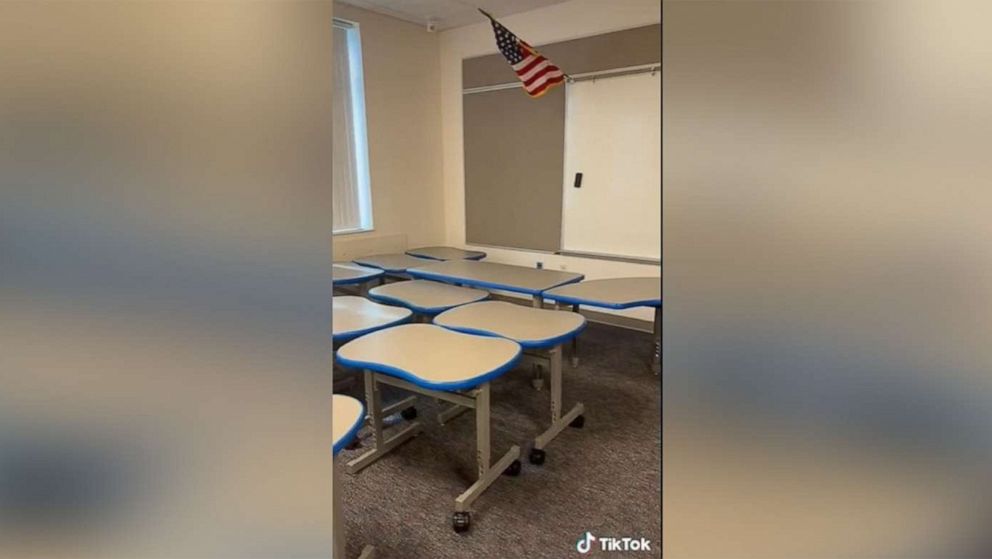 Megan's video garnered thousands of comments, many from teachers who shared similar experiences, and others who responded she should be grateful for a clean room.

"Yup!! That’s all you get. Desks, chairs, and textbooks. That’s what people don’t realize. We buy EVERYTHING!!," wrote one commenter.

"That room is clean w/ nice desks, tables, & storage. Count your blessings. I have been in rooms w/ holes in the wall & floor w/ mice, insects, mold," wrote another commenter.

"I’m less concerned with the furniture—-where are the resources and learning material?," another comment read.

In addition to sharing the video, Megan also included a link to her wish list on Amazon, which reads, "This wish list will be used to purchase things for my kindergarten class for the 2022-2023 school year! Thank you for supporting us and helping me to create life long learners!"

In doing so, Megan joined a growing trend in the U.S. where teachers post public wish lists of supplies they would otherwise have to pay for out of pocket, including everything from snacks for kids to books, educational materials and classroom supplies like tissues and hand sanitizer.

The wish lists are often shared on social media, frequently by celebrities with large followings, where strangers can find them and donate the supplies.

MORE: Former teacher opens up about why he quit for a job at Walmart

In Megan's case, she said that within days of sharing a link to her wish list on social media, around 70% of it had been fulfilled, with strangers, family and friends sending everything from storage containers to STEM activities, a backpack organizer and options for flexible seating for her students.

"All students deserve everything, but my kiddos are Title 1," she said, referring to the designation for schools that have high percentages of children from low-income families. "I don’t know if they’re going home to nice things and I really want them to have that here." 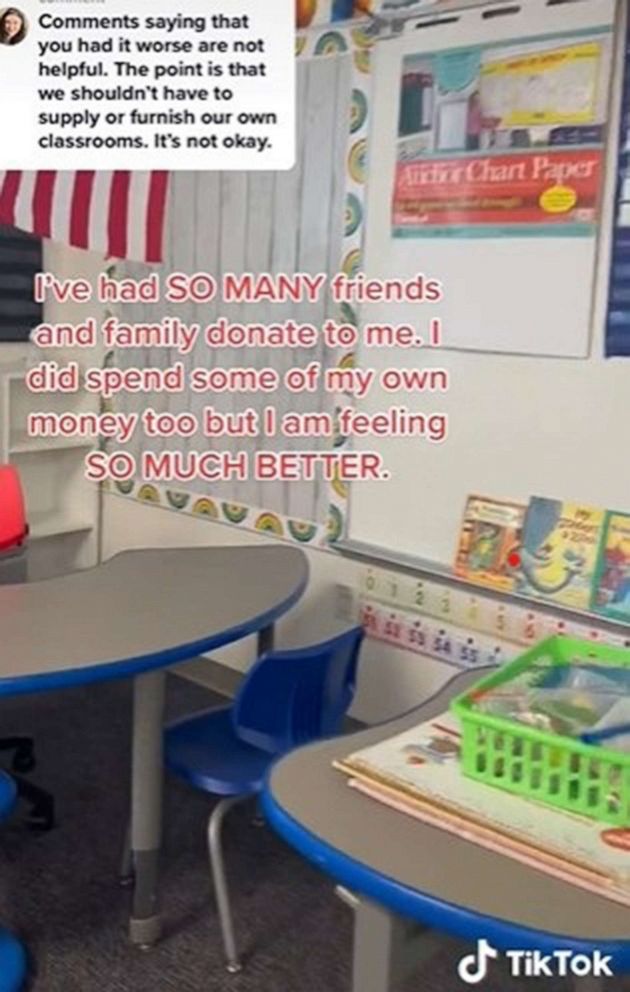 Mary Kusler, senior director for advocacy for the National Education Association, a teachers' union, told "GMA" that, on average, teachers in the U.S. spend upwards of $500 of their own money on their classrooms per school year.

"It’s so common of an experience, the time and care that educators spend before their students take their first step into the classroom to set up that learning environment in a welcoming way," said Kusler. "That work that teachers do, and that time is often overlooked."

Social media and programs like DonorsChoose, which allows public school teachers to request needed materials, have put a new spotlight on the issue teachers have long faced of having to use their own salary to supply their classroom, according to Kusler.

"They’re going to do everything from spending money to create name plates for their kids’ desks to creating bulletin boards to making sure they have an extra granola bar in their desks or extra clothes or extra water bottles," she said of teachers. "They are there to meet the needs of those students, and they’re going to do what they need to do."

Kusler noted that teachers use their own money on their classrooms, despite being in an historically underpaid profession.

In 2021, the average elementary school teacher salary in the U.S. was just over $67,000, according to the Bureau of Labor Statistics.

MORE: Meet some of the teachers whose back-to-school wish lists were fulfilled by Chrissy Teigen

Megan said she debated on whether to return to teaching after being a stay-at-home mom, in part because of the low pay and high stress of the job, noting that she saw many of her colleagues leaving the teaching profession.

The National Education Association estimates the U.S. is facing a shortage of 300,000 teachers for the 2022-23 school year.

For Megan, she said she ultimately returned because teaching kids is her passion, and she said she is determined to succeed at her job. 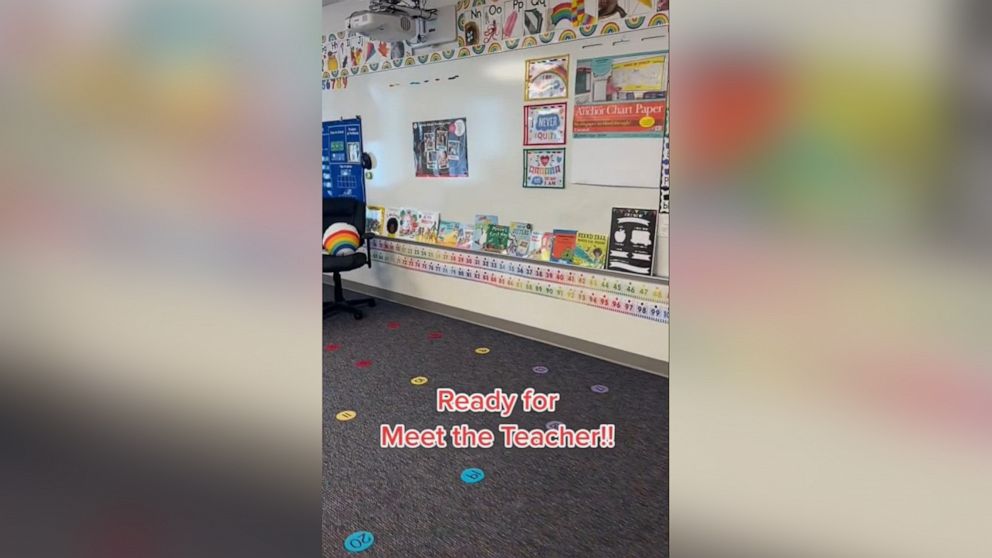 Around two weeks after posting her first video, Meghan shared another video of her classroom, fully decorated and ready for students.

"What happens in my classroom with my kids, the relationships, I really can't imagine doing anything else," she said.