When Latonya Young received her associate's degree from Georgia State University last month, in the stands to watch her graduate were her family, her friends and an Uber passenger who made her graduation possible.

The passenger, Kevin Esch, paid nearly $700 to Georgia State last summer to release a financial hold that had prevented Young from attending school for years.

"I have thanked him so much but I feel like I haven’t thanked him enough," Young told "Good Morning America" of Esch's generosity. "It was not just the money but his willingness and his sacrifice for me to do better in life. This man knew me for maybe 20 minutes." 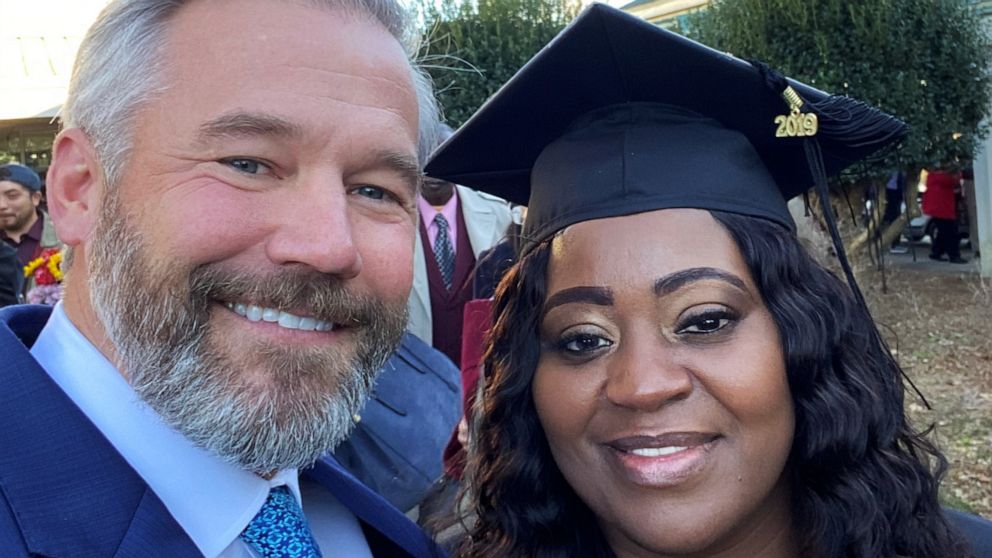 Young, a single mom of three sons, began to drive for Uber and Lyft nearly five years ago to help make ends meet and supplement the money she makes as a hairstylist.

The 43-year-old Georgia resident dropped out of high school at age 16 when she became pregnant with her oldest son, now 26.

She earned her GED in 2007 but said she "wasn’t fully satisfied because I felt like I hadn’t accomplished a goal that needed to be accomplished. I didn’t want to stop there."

So, she enrolled at Georgia State in 2010 and began to take classes but was soon stopped because of a $693 financial hold on her account.

"I asked them could I pay it monthly and they said they didn’t do payment arrangements so I kind of stopped going to school at that point," she said. "Then shortly after that I was in a really bad car accident and underwent two surgeries." 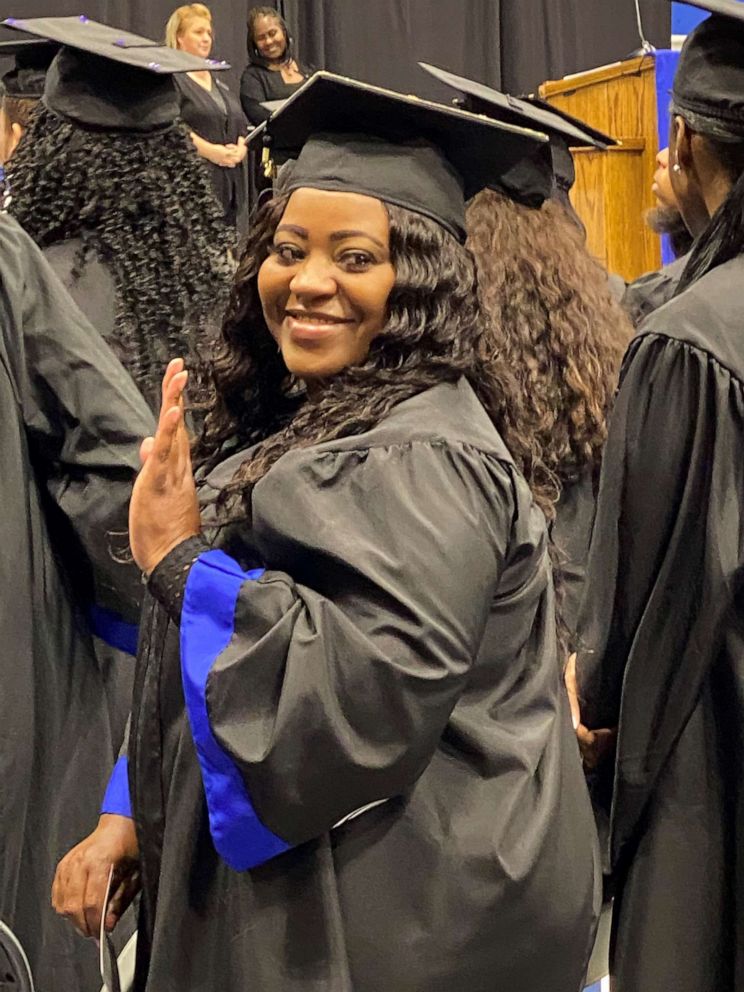 Every time Young would work extra shifts and come up with the $693 she needed to return to school, she said something would happen and she would need the money to help either her mom or her sons.

All of that changed in May 2018 when Young happened to be the Uber driver assigned to pick up Esch outside Mercedes-Benz Stadium in Atlanta.

"He got in the car and was really happy and talkative," recalled Young. "I’m a people person too so I always try to talk to people in my car."

Young and Esch struck up a conversation deeper than most that happen in Uber rides, with Esch telling Young he was going through a divorce and Young offering tips she learned through her own divorce.

When Esch, 44, of Brookhaven, Georgia, started asking Young more about herself, she opened up about all she had been through and her desire to obtain a college degree.

(MORE: Uber driver surprises Tim Hortons employee with gifts after hearing her story on their ride to work)

"I told him that a lot of concerts were going on that weekend and that I was going to work a lot to make the money I needed," Young said.

Still feeling inspired by Young's college dream, he went a few days later in person to Georgia State University and paid off her $693 hold, allowing her to start classes again.

"It was something I could do that I thought was worth it and would really help her," Esch told "GMA."

Young recalls receiving a text from Esch that included a photo of the receipt and said, "Okay, you’re all set. Register for your class."

"I still have the text that he sent me and my response. I wrote back, ‘Oh my God,'" said Young, remembering that Esch tried to downplay his generosity. "I told him, 'I feel like your $693 is $1 million. I feel like I hit the jackpot.'"

"That weekend I did make enough money to pay the $693 and I tried to give it to Kevin and he wouldn’t take it," she said. "He told me to use it for my kids."

Young started back at Georgia State in August 2018 and walked across the stage last month to receive her associate's degree in criminal justice.

Esch, whom Young still keeps in touch with, watched her accept her degree.

"That was amazing, to be there and to see the smile on her face and to know that she did it," said Esch. "I know she’s going to go places much further than that now."

Esch received a letter and picture frame from Georgia State University to note his role in Young's graduation.

“Kevin Esch has been justifiably applauded and heralded for providing the funds to enable Georgia State student Latonya Young to earn a college degree, but his gift is so much bigger than that. With it he has changed a life and opened a door to a brighter future for a student who, like so many others we see at Georgia State, simply needs a chance to achieve and succeed," the university told "GMA" in a statement.

Young, who is paying for college with student loans and financial aid, plans to return to Georgia State this month to work toward her bachelor's degree. Her ultimate goal is to go to law school and become a defense attorney.

"My mother quit school in seventh grade to care for her brothers and sisters," said Young, who was raised by a single mom. "I always talked about wanting to go to college and then my dreams were shattered because I didn’t have that person to instill the value of education in me."

"I would like the world to know who Kevin is and that there are still good people out there," she said.