Amanda Gorman said she feels "amazing" after making history Wednesday as the youngest poet in recent history to perform at a presidential inauguration.

"It’s not often that you wake up on a morning feeling like this," Gorman, 22, said Thursday on "Good Morning America" in her first live TV interview since President Joe Biden's inauguration.

Gorman, a Los Angeles native, became the breakout star of the inauguration with her poem, "The Hill We Climb," which she finished writing on the night of Jan. 6, hours after rioters took siege on Capitol Hill.

"We've learned that quiet isn't always peace and the norms and notions of what just is, isn't always justice. And yet the dawn is hours before we knew it, somehow we do it, somehow we’ve weathered and witnessed a nation that isn't broken but simply unfinished," she said in the poem. "We, the successors of a country and a time, where a skinny black girl descended from slaves and raised by a single mother can dream of becoming president, only to find herself reciting for one."

Gorman's "Hamilton" references in her inaugural poem caught the eye of Lin-Manuel Miranda, the creator of the Tony-winning Broadway musical, who tweeted to Gorman on Wednesday that she was "perfect."

You were perfect. Perfectly written, perfectly delivered. Every bit of it. Brava! -LMM

On Thursday, Miranda surprised Gorman with a special message delivered on "GMA," saying, "The right words in the right order can change the world, and you proved that yesterday with your brilliant piece. I’m so incredibly proud of you and I can’t wait to see what’s next. You smashed it.”

"I almost fell out of my chair," Gorman said in reaction to Miranda's praise. "That’s amazing." 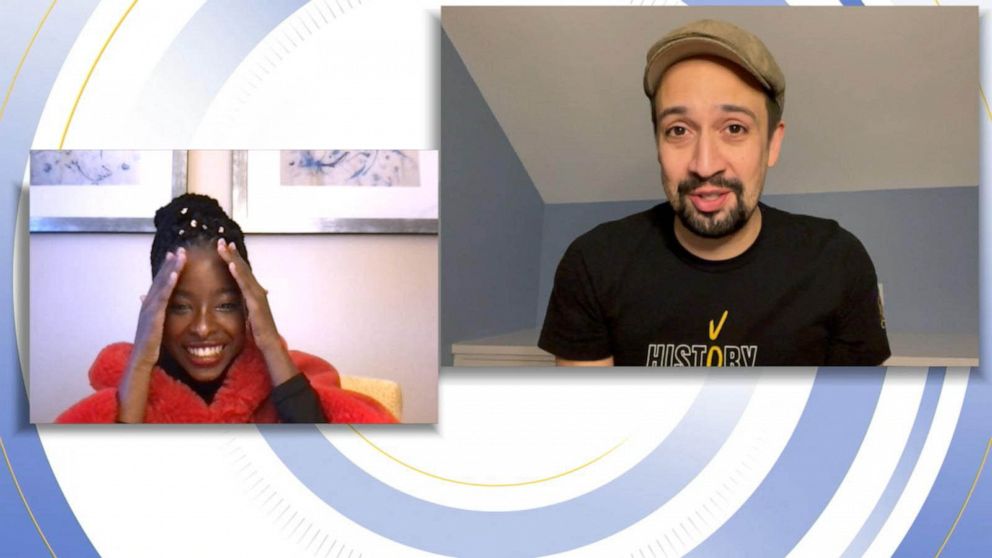 Gorman, named the country's first National Youth Poet Laureate in 2017, was handpicked to read at the inauguration by first lady Jill Biden.

The Harvard graduate said she was "honestly shocked" at the invitation.

"I had not been expecting at 22 that they would trust me with such an honor," she said. "I was also daunted at the same time. I was honestly scared of writing such a poem. I wasn’t sure that I could even do it justice, but I’m so glad that I put my best foot forward and did it."

Adding to Gorman's hesitation was that she has fought to overcome a speech impediment, similar to the experience of President Biden, who has been public about his lifelong battle with stuttering.

"My speech impediment wasn’t a stutter but it was dropping several letters that I just could not say for several years, most specifically the ‘r’ sound," said Gorman. "It would take until probably I was 20 to say, meaning that I couldn’t say words like poetry or even Gorman, which is my last name. I had to really work at it and practice to get to where I am today." 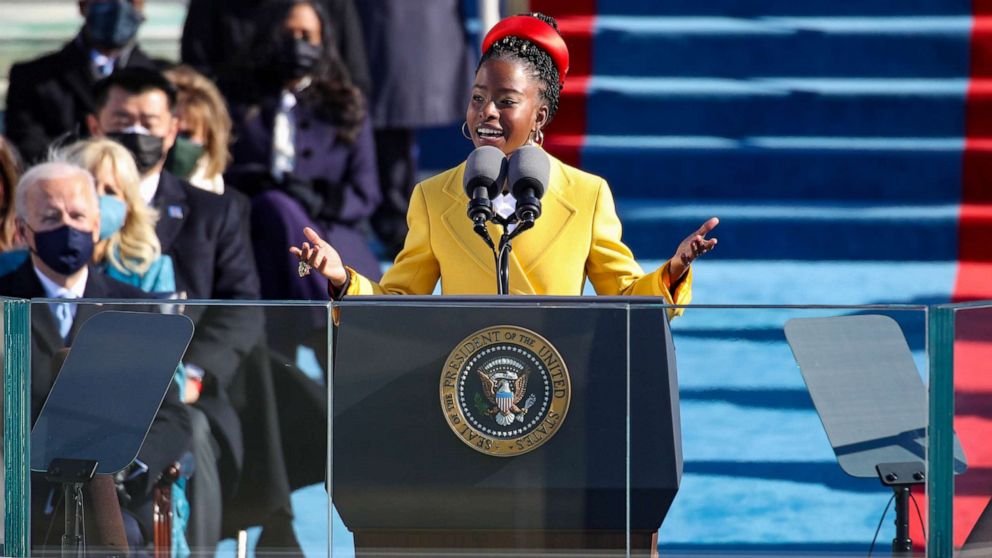 Rob Carr/Getty Images
Youth Poet Laureate Amanda Gorman speaks at the inauguration of President Joe Biden on the West Front of the U.S. Capitol on Jan. 20, 2021, in Washington, D.C.

Gorman said she was particularly proud at how she delivered the word "rise" in her poem, although she joked that during the inauguration, "I was kind of like why in the world did I put rise in my poem five times."

"But also it was this amazing full-circle moment for me because if I’d written this poem three years ago, I wouldn’t have been able to say it," she said. "So it was me rising I think as well as the country at that time." 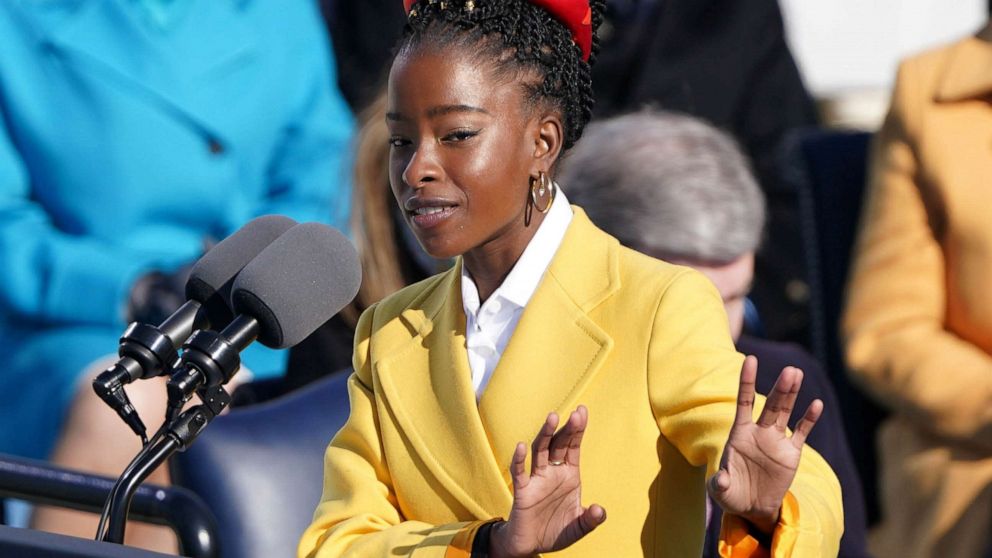 Kevin Lamarque/Reuters
Amanda Gorman recites a poem during the inauguration of Joe Biden as the 46th President of the United States on the West Front of the U.S. Capitol in Washington, D.C., Jan. 20, 2021.

Gorman also received praise for her poem from the likes of Barack Obama, Hillary Clinton and Oprah Winfrey, who tweeted, "Maya Angelou is cheering—and so am I."

Angelou is a hero of Gorman's, and the young poet confirmed that Winfrey gifted her with jewelry for the inauguration that helped her feel closer to Angelou.

I have never been prouder to see another young woman rise! Brava Brava, @TheAmandaGorman! Maya Angelou is cheering—and so am I. pic.twitter.com/I5HLE0qbPs

"Oprah wrote to me ... saying, ‘I bought Maya Angelou’s coat and gloves when she performed the poem at [Bill] Clinton’s inauguration. I’d love to continue the tradition and buy something for you,'" recalled Gorman. "What we settled on was this ring, which if you look has a caged bird inside, and for me that was to symbolize my idol, Maya Angelou, who wrote the great autobiography, ‘I Know Why the Caged Bird Sings,' and that way I could, you know, feel like I had Maya close in continuing her tradition."

"Oprah also bought my earrings as well," she said. "She was just so generous in making sure I was prepared both emotionally and fashionably for the moment."

Thank you! I would be nowhere without the women whose footsteps I dance in. While reciting my poem, I wore a ring with a caged bird—a gift from @Oprah for the occasion , to symbolize Maya Angelou, a previous inaugural poet. Here’s to the women who have climbed my hills before. https://t.co/5Tegd20sko

Amid all of the attention she received at the inauguration and in the 24 hours since, Gorman said she was especially touched by meeting Lady Gaga, who sang the Star-Spangled banner on Wednesday.

"It was so incredible meeting Lady Gaga. I mean I’m gaga for Gaga, literally," she said. "We kind of just each flew to each other like magnets after the ceremony ended and we were both just crying and hugging."

"It was just such a great moment because what she does with music I aspire to do with poetry so it was great to have that woman to woman camaraderie," Gorman added. 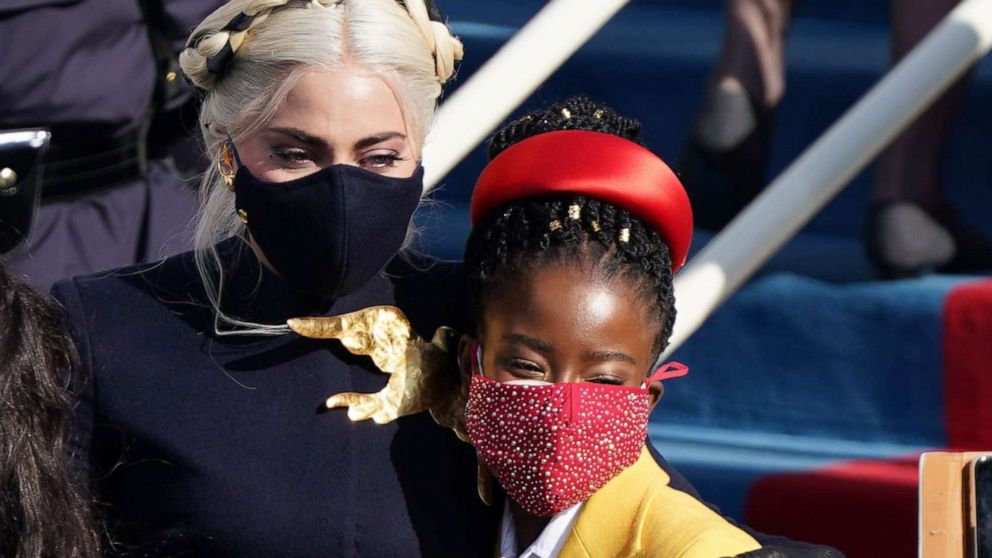 Kevin Lamarque/Reuters
Lady Gaga poses with Amanda Gorman during the inauguration of Joe Biden as the 46th President of the United States on the West Front of the U.S. Capitol in Washington, D.C., Jan. 20, 2021.

Gorman, who told The New York Times in 2017 that she plans to run for president in 2036, delivered her poem at a historic inauguration that saw Kamala Harris sworn in as the country's first female vice president.

When asked on "GMA" if she still hopes to run for president in the next decade, Gorman replied with two simple words, "Heck yeah."