After the pandemic hit the U.S. in early 2020, Chris Pernell, MD was on TV screens across the country, emerging as a leading voice on COVID-19's disproportionate impact on people of color.

Instead, last month, she left her job at the hospital entirely.

Tasked with advancing diversity, equity, and inclusion initiatives at the hospital, Pernell said the conditions she fought to change -- discrimination and racial bias in medicine -- were ultimately why she chose to resign.

In interviews with ABC News, three Black physicians, ranging from a former resident to a hospital executive, shared allegations of being systematically pushed out of their workplaces. One claimed they were terminated without justification. Others said they resigned of their own volition due to an untenable work climate.

All of them cited racial discrimination as one reason for their departure, which they said was enabled and exacerbated by the medical field's competitive culture, hierarchical structure, and often exploitative nature.

They also pointed to the existing underrepresentation of Black doctors, who constitute only 5% of all practicing physicians nationwide, according to the Association of American Medical Colleges. Recent census data, meanwhile, shows that Black people make up around 12% of the U.S. population. 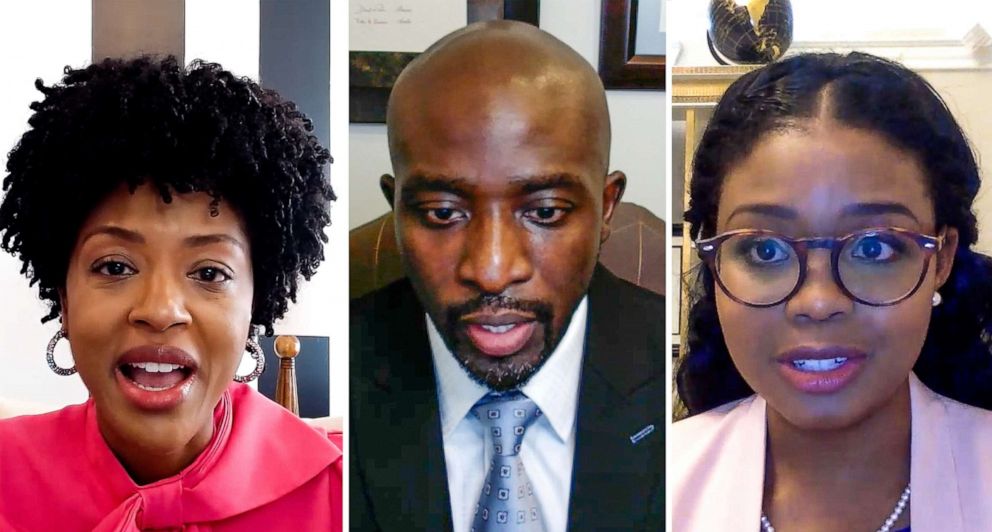 This shortage of Black doctors has been linked to reduced access to medical care, less effective medical care, and worse outcomes, especially among Black patients, according to the American Medical Association.

In August, the advocacy organization Black Doc Village launched a national campaign dubbed #BlackDocsBelong to bring awareness to the shortage of Black physicians and high rate of dismissals among Black medical residents.

While Black residents constitute around 5% of all residents, they accounted for nearly 20% of those dismissed in 2015, according to a report by the Accreditation Council for Graduate Medical Education.

In prestigious specialty fields, like surgery, the disparities can be even more pronounced, per ACGME's analysis.

Vanessa Grubbs, MD, the Black Doc Village president, said the organization specifically strives to advocate and support Black physicians by "interrupting the system" that continually pushes them out.

"This is about increasing the number of Black physicians so that we can improve the health of the Black community," she told ABC News.

"My story is not unique across the larger field of healthcare and life in general," she said.

The personal cost of calling out alleged racism in health care

Rosandra Daywalker, MD graduated from medical school at the top of her class in 2015, matching with the University of Texas Medical Branch's otolaryngology program for her residency.

At the time, Daywalker said she was the only Black trainee there. Nevertheless, she said she excelled in the program, boasting a spotless record and receiving stellar evaluations.

But after Daywalker voiced concerns about how a Black patient was treated by a white faculty member during a morbidity and mortality conference -- and that same faculty member later became her direct supervisor -- she said things began to change.

"Overnight, I become someone who doesn't like feedback," she said. "You start to see him inject these words like I'm 'unprofessional' or that I'm 'incompetent.'" 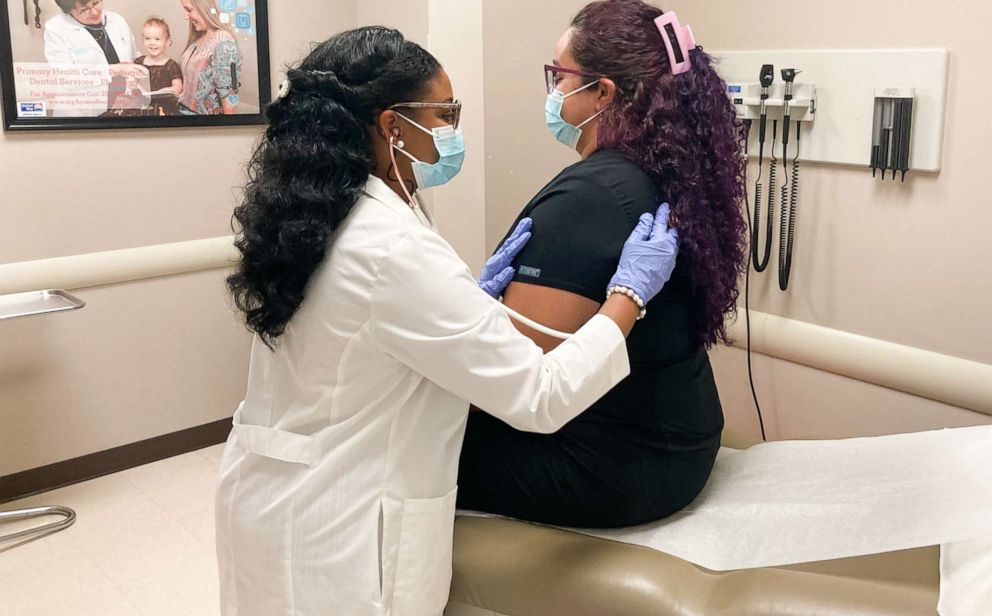 From there, Daywalker claimed she endured differential treatment from the supervisor, including him unnecessarily delaying her clinical rotations.

She said the faculty member also frequently manufactured lies about her, casting her into an "angry Black woman" stereotype by "falsely accusing her of being angry and looking like she wanted to assault him," according to a lawsuit she filed against UTMB.

His hostility towards her came to a head when she was unexpectedly placed on a performance improvement plan, Daywalker said.

"This is what they do. If they don't have a real reason to get rid of you to fire you, they will make things so bad that you have no choice but to leave," Daywalker claimed.

Daywalker said the hostile work environment, which she said posed concerns for her own safety, and the toll it took on her health made leaving UTMB her only option.

While Daywalker was not fired because she said UTMB had no basis to do so, after more than three years of training, the Texas Workforce Commission determined she resigned “for good cause,” meaning for a work-related reason that would make an individual who wants to remain employed leave employment, such as unsafe working conditions.

Daywalker left her residency in 2018. She has since filed a lawsuit against UTMB alleging violations of the Civil Rights Act and the Family Leave Act.

UTMB declined to comment on Daywalker's allegations due to ongoing litigation. In court papers, it has denied her claims and contends it "had legitimate, non-discriminatory, and non-retaliatory reasons for all employment actions affecting Daywalker that she contends were unlawful."

Daywalker is not the only physician who said they were retaliated against for speaking out about racism in healthcare.

Pernell, the only Black woman on University Hospital's senior executive leadership group, said her efforts to implement DEI-related reforms at the hospital were often demeaned and unfairly scrutinized.

When she began publicly criticizing the Trump administration's pandemic response and sharing her personal story of losing her father to COVID-19, Pernell said she was told other hospital executives didn't approve of her "mouthing off" on TV. 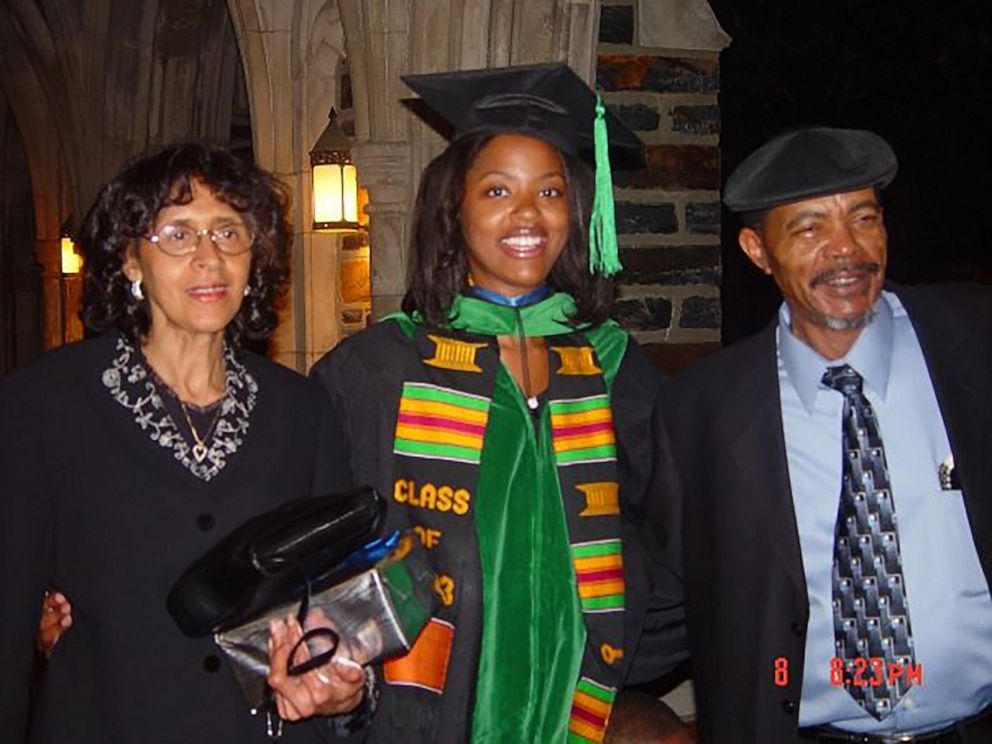 She said University Hospital subsequently launched an investigation into her conduct, accusing her of misusing hospital resources for her media appearances.

"[It was] as if I, a Black woman who had experienced loss and hurt and grief in this pandemic, should not speak about it -- and speak about it from the auspices of also being a Black physician, leader and executive," Pernell said.

Pernell said the investigation lasted through January 2021. Not long after, University Hospital commenced its search for a new CEO. At the time, more than 100 leaders from across the state signed an open letter endorsing her for the position.

But Pernell said she was never able to apply because she was under yet another investigation, this time accusing her of pressuring other staff members to support her CEO candidacy, which she denies.

Pernell said the investigations were "baseless" attempts to "inflict reputational harm" as her profile rose, making her less competitive as a CEO candidate.

In her final conversation with the hospital's interim CEO and chief legal officer, she recalled telling them, "I want you to be able to hold space for what a Black woman experiences and the level of scrutiny around just a desire to apply."

University Hospital did not directly address Pernell's account. But its board of directors wrote in a statement to ABC News that the hospital is "committed to creating a diverse, equitable and inclusive environment," has identified "specific, measurable steps in furtherance of that goal," is "very proud" of its progress and continues "to pursue this goal in earnest."

Other physicians told ABC News that they were similarly antagonized once perceived as professional threats, which they say racial bias heightened -- on top of the medical field’s already cutthroat culture.

In March 2018, Dare Adewumi, MD began working at Wellstar Cobb Hospital in Austell, Georgia, where he said he was recruited to singlehandedly "restart" the neurosurgery program. Previously, the hospital had no neurosurgeons and referred patients elsewhere, including Wellstar Kennestone Hospital, where Adewumi's supervisor worked.

However, as his practice flourished, Adewumi said he began receiving an influx of "letters of inquiry," all but one filed by colleagues, questioning his surgical approaches and technique. He said his white colleagues did not receive similar criticism, even when they had worse patient outcomes.

He also said the complaints sent out for external review found that he did not deviate from the appropriate standard of care. 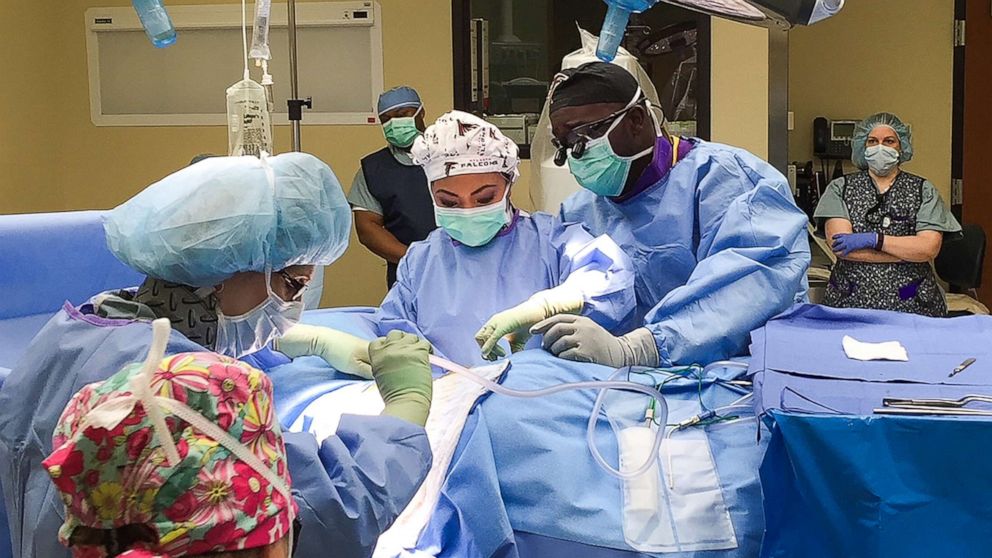 Before arriving at Wellstar, Adewumi said he had completed two fellowships on spine and brain tumors, where he learned several difficult-to-master techniques. He suspected there were "elements of jealousy" and competition at play among his Wellstar colleagues, he said, "especially [me] being a dark-skinned Nigerian who is now doing these big complex surgeries that would intimidate others."

Adewumi said his presence at Wellstar Cobb also diverted lucrative surgeries away from his colleagues at Wellstar Kennestone.

After he raised concerns about the letters, Adewumi said a hospital system executive suggested he resign. Adewumi refused.

He said Wellstar then proposed an "action plan," framed as a way for him to "build camaraderie" with the other hospital system neurosurgeons. Adewumi said he obliged, quickly completing many of the requirements and garnering praise from medical executive committee leaders for his progress and "good attitude."

Despite this, two months later, in October 2019, he was fired "for no cause" because "certain relationships were not properly fostered," Adewumi said he was told.

With Adewumi's action plan incomplete, the hospital refused to give him a "letter of good standing," which he needs for another hospital to credential him.

In March 2020 when hospitals were slammed at the height of the pandemic, Adewumi said he emailed Wellstar administrators offering to return temporarily as a volunteer, which would allow him to complete his action plan. But Wellstar declined his offer. 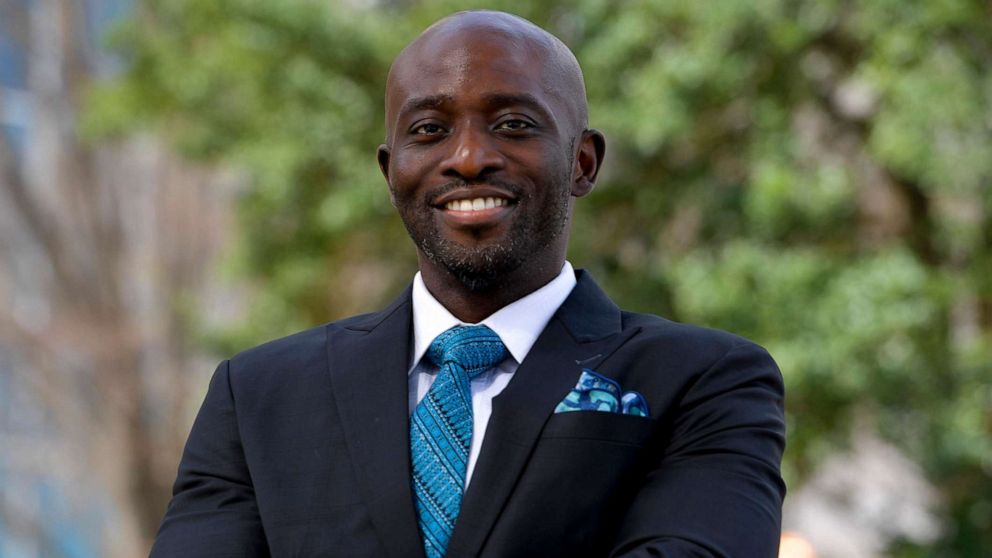 To this day, Adewumi is still unable to find full-time employment as a neurosurgeon because of the unfinished action plan. He has filed a lawsuit against Wellstar, alleging violations of the Civil Rights Act.

"Imagine going through 15 years of learning how to do something and dedicating your entire livelihood to this and then having it snatched away from you because you're the wrong color," Adewumi said.

In court papers, the hospital has denied the allegations. Wellstar's attorney William Hill wrote in a statement to ABC News that Adewumi's case is "not about race" and denied that Wellstar discriminated against him. He added, "The evidence at trial will show that Dr. Adewumi's allegations have no merit and that Dr. Adewumi continues to ignore the legitimate business and medical professional reasons for not continuing his employment."

The physicians interviewed said the trend of Black doctors leaving medicine can't be blamed on just a handful of "bad actors."

"There's a hierarchical structure in medicine," Adewumi said. "Especially in surgery, there's militaristic approach to it as well, where you simply do your job, you shut up, you don't complain."

Daywalker added that employee remediation processes are inconsistent and unevenly enforced across hospitals, with minimal oversight and accountability.

Pernell noted that the loss of already underrepresented Black doctors also has detrimental consequences for access to and quality of patient care overall.

In August, a group of physicians, medical students, and patients staged a protest in front of Kaiser Permanente School of Medicine in Pasadena, California, to kick off the #BlackDocsBelong national awareness campaign.

On a policy level, Grubbs said the group is calling for greater accountability and transparency measures, as well as financial incentives for hospitals to graduate Black residents. The campaign also includes a project to collect concrete data on the rate of Black physician dismissals, as well as their stories.

"Everyone tries to dismiss a story here and there," Grubbs said. "But if we put all our stories together, that's where the power is to make change." 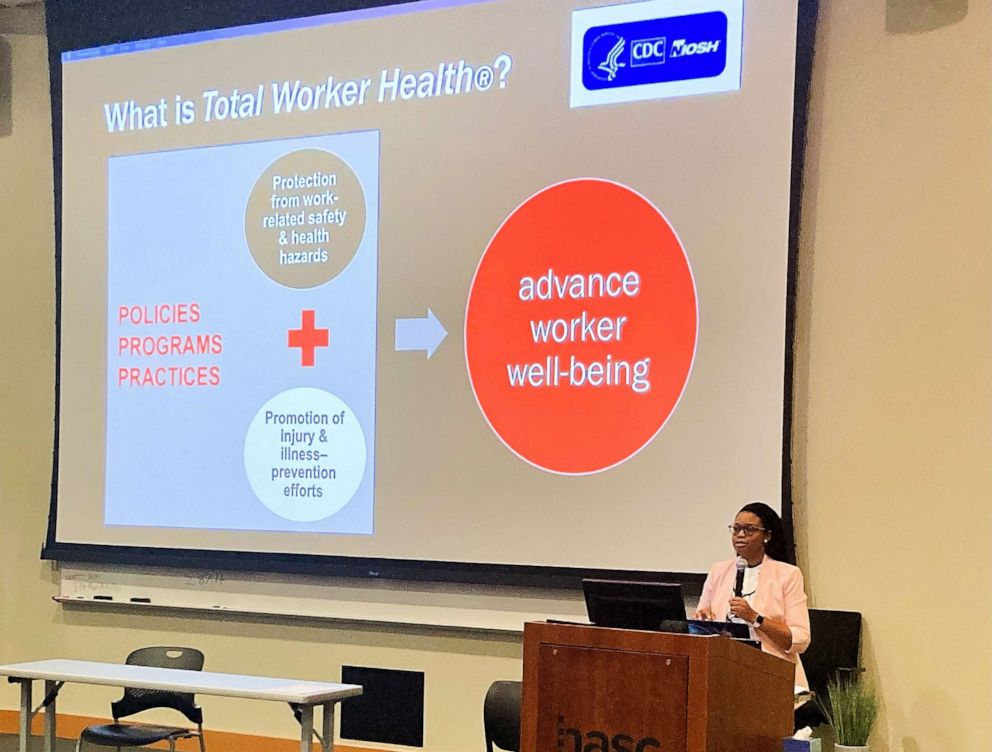 After leaving UTMB, Daywalker completed an occupational and environmental medicine residency. She is now a PhD student studying total worker health, writing her dissertation on envisioning an inclusive workplace model that precludes rather than empowers the discriminatory practices she said she faced.

"We normalize -- and even glorify -- poor working conditions and traumatic experiences in medicine," Daywalker said. "Why is that? Our resources, access, and knowledge have evolved, so why hasn't our idea of what it means to become and remain a physician?"

"How do we set up organizational culture, systems level policies, practices, procedures to ensure wellbeing and safety for everybody? That starts with listening to the most marginalized," she added.