Arnulfo Reyes woke up ready for a good day. His third- and fourth-grade class at Robb Elementary had finished its final tests the week before. Awards were going to be handed out. He planned to show his students a movie, "The Addams Family" -- the animated version.

"It was going to be a good day," Reyes told ABC News anchor Amy Robach in an exclusive interview. "There was nothing unusual that day, we were just walking back to the classroom … to watch the rest of the movie."

Around 11:30 a.m., however, the normalcy shattered. Reyes said he heard a bang. Unsure of what it was, he told the students to get under their desks -- just like they'd practiced. 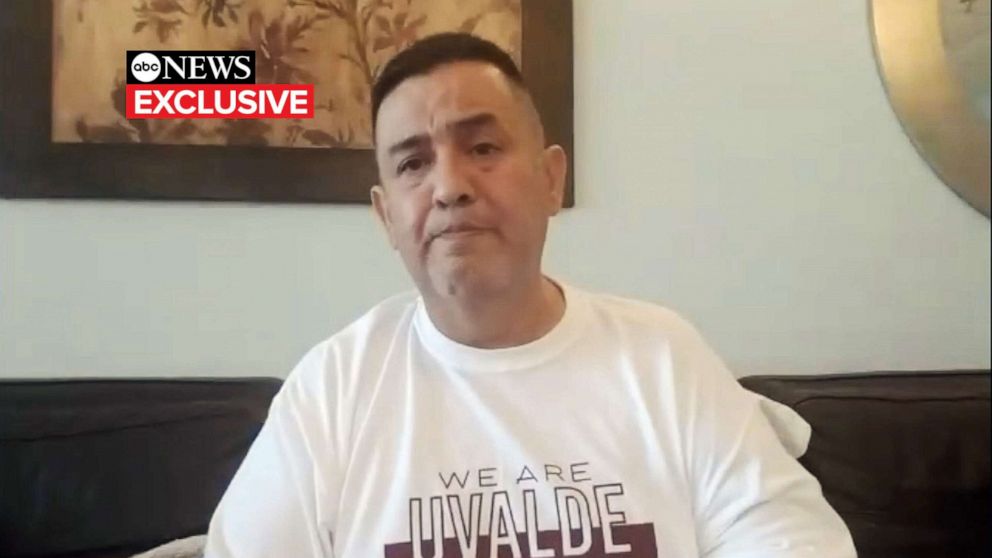 "The kids were yelling, 'What's going on, Mr. Reyes?'" he said. "[The students] were going under the table, and I was trying to get them to do that as fast as I could."

The next 77 minutes of carnage "destroyed" Reyes, he said, and forever changed a school, a community and perhaps a country. By the end of his rampage, a gunman had killed 19 students -- including all 11 in Reyes' classroom -- and two teachers. Reyes himself sustained multiple gunshot wounds.

"I feel so bad for the parents because they lost a child," Reyes told Robach. "But they lost one child. I lost 11 that day, all at one time."

From a hospital room in San Antonio, less than two weeks after surviving one of the deadliest school shootings in U.S. history, Reyes offered the most vivid account yet of what transpired inside classroom 111 of Robb Elementary School on May 24.

He also waded into the nationwide debate over gun violence and slammed local police as "cowards" for failing to act faster. And while Reyes recovers, he's already plotting his next act: ensuring this never happens again.

"The only thing that I know is that I won't let these children and my co-workers die in vain," he said. "I will go to the end of the world to make sure things get changed. If that's what I have to do for the rest of my life, I will do it."

Courtesy the Families| Reuters| AP
The 21 people who died on May 24, 2022 at Robb Elementary School in Uvalde, Texas, in a mass shooting.
Editor's Picks

Before the gunman entered his classroom, Reyes said he told his students, "Get under the table and act like you're asleep." When he turned, he saw a blur -- and then gunfire.

Two shots rang out. Reyes immediately "knew something was wrong," he said. He couldn't feel his arm, and he fell to the floor as the gunman fired indiscriminately into the classroom of 10- and 11-year-olds. After a short time, silence fell over the room.

"I prayed that I wouldn't hear none of my students talk," he said. "And I didn't hear talk for a while. But then, later on, he did shoot again. So, if he didn't get them the first time, he got them the second time."

MORE: 9-year-old Ellie Garcia to be laid to rest in Uvalde

Wounded on the ground, Reyes said he followed his own advice and pretended to be unconscious. Reyes said the gunman again fired his weapon.

"And that was the second time he got me," Reyes said. "Just to make sure that I was dead."

The second gunshot pierced Reyes' back and lung.

"I had no concept of time," Reyes said. "When things go bad, it seems like eternity. The only thing that I can say is I felt like my blood was like an hourglass." In the 14 days since the shooting, Reyes said he has undergone five surgeries and twice had his blood replaced.

Reyes said that he heard officers approach his classroom from what sounded like the hallway three times, but they did not enter.

On one occasion, he said he could hear a student calling for the police. “One of the students from the next-door classroom was saying, 'Officer, we're in here. We're in here'...But the [police] had already left,” he said.

“And then [the gunman] got up from behind my desk and he walked over there, and he shot again.”

Unbeknownst to Reyes, parents and onlookers eventually gathered outside of the school, encouraging officers to enter the building. It wasn't until 12:50 p.m. when a tactical unit finally breached the classroom door and killed the gunman.

"After that it was just bullets everywhere," he said. "And then I just remember Border Patrol saying, 'Get up, get out,' and I couldn't get up." 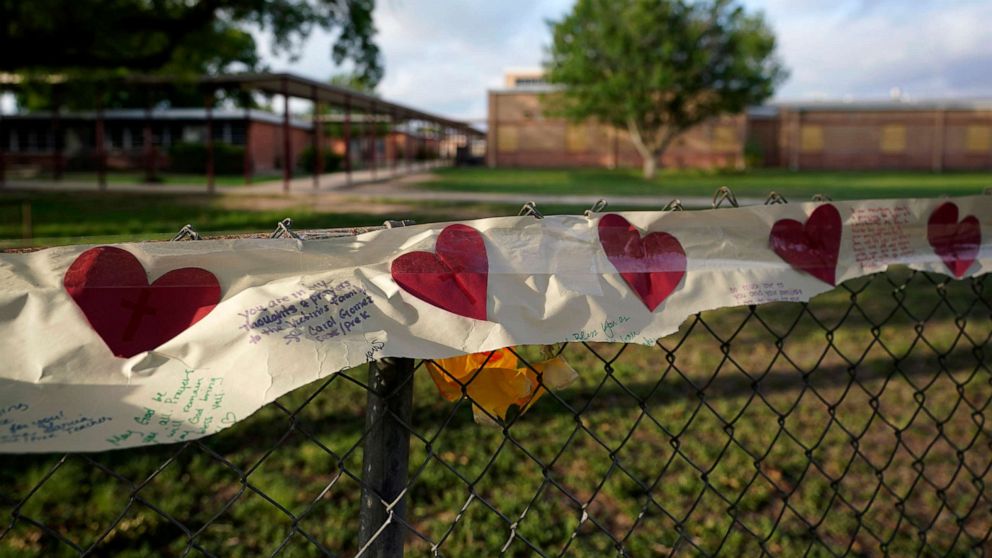 Eric Gay/AP
Hearts decorate a banner in front of the boarded up Robb Elementary School building where a memorial has been created to honor the victims killed in the recent school shooting, June 3, 2022, in Uvalde, Texas. Two teachers and 19 students were killed.

In the wake of the shooting, law enforcement has come under immense scrutiny for failing to act faster. Seventy-seven minutes passed from the time the gunman entered the school until officers breached the door and killed him.

"They're cowards," Reyes said. "They sit there and did nothing for our community. They took a long time to go in… I will never forgive them."

Law enforcement and state officials have repeatedly corrected themselves and at times provided conflicting details about their response. At one point, a Texas Department of Public Safety official said the on-scene commanding officer made the "wrong decision" to wait to breach the barricaded classrooms.

MORE: How the law enforcement narrative of Uvalde school massacre has changed

Robb Elementary School prepared for active shooter events, conducting drills as recently as a few weeks before the mass shooting. But Reyes described failures in protocol at nearly every step of the security process on May 24 -- missteps in protocol and execution that he says cost lives.

"There was no announcement. I did not receive any messages on my phone -- sometimes we do get a Raptor system," he said, referring to the school district's emergency alert program, "but I didn't get anything, and I didn't hear anything."

Reyes also described complaints he said he had made about his door, which is meant to remain shut and locked while class is in session. At prior security checks, Reyes said he noticed that his door would not latch -- an issue he said he raised with the school's principal.

"When that would happen, I would tell my principal, 'Hey, I'm going to get in trouble again, they're going to come and tell you that I left my door unlocked, which I didn't,'" he said. "But the latch was stuck. So, it was just an easy fix."

Even with the failures in plan implementation, Reyes said the outcome felt inevitable: "No training would ever prepare anybody for this."

"It all happened too fast. Training, no training, all kinds of training -- nothing gets you ready for this," he said. "We trained our kids to sit under the table and that's what I thought of at the time. But we set them up to be like ducks."

The Uvalde Police Department, Texas Department of Public Safety and Robb Elementary School did not respond to requests for comment.

The solution is not more training, according to Reyes, but an overhaul of a system that allows easy access to firearms. Reyes emphasized that he is not against gun ownership, but advocated for common-sense gun legislation that would raise the age limit for would-be gun purchasers.

"If you want to buy a gun, you want to own a gun, that's fine," he said. "But the age limit has to change. And I think that they need to do more background checks on it. Things just have to change. It must change."

MORE: At least 17 killed, 62 injured in mass shootings across the US over weekend