A white gunman's deadly rampage in Georgia that left six women of Asian descent dead has put the spotlight on the harassment and violence Asian American women face, leading to calls for change.

The 21-year-old gunman's killing of eight people total at three spas in the Atlanta area Tuesday occurred amid a spate of anti-Asian attacks nationwide during the coronavirus pandemic.

Over the past year, Asian American women reported 2.3 times as many hate incidents as Asian American men, according to a report released Tuesday by Stop AAPI Hate, a nonprofit organization formed during the pandemic to respond to the increase in attacks against people in the Asian American and Pacific Islander (AAPI) community.

Anti-Asian hate crime in 16 of America’s largest cities increased 149% in 2020 according to an analysis of police data by the Center for the Study of Hate & Extremism at California State University, San Bernardino.

Among both men and women, nearly 3,800 hate incidents were reported against AAPI people nationwide over the last year, according to Stop AAPI Hate. 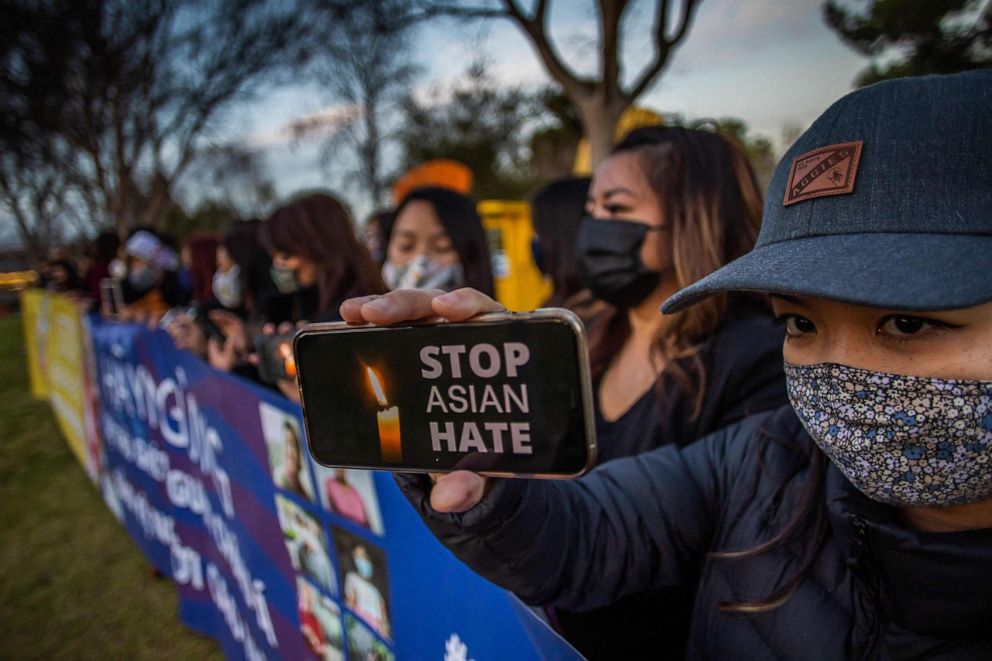 Apu Gomes/AFP via Getty Images
Julie Tran holds her phone during a candlelight vigil in Garden Grove, Calif., March 17, 2021, in response to the Atlanta shootings on March 16 and other instances of violence across the country targeting people of Asian descent.

"It is out of sadness and grief that so many Asian American people, especially Asian American women, are calling for change," said Dr. Melissa May Borja, an assistant professor of American culture at the University of Michigan, who specializes in Asian American history. "So many of us are acknowledging that we're not surprised by what happened, and so there's a certain grief associated with knowing that people have been doing these things to our community for a long time, to Asian American women in particular."

The suspect in Tuesday's shooting, Robert Long, told investigators that the shootings were not racially motivated and instead blamed a struggle with an "addiction to sex," according to a statement from the Cherokee County Sheriff's Office. Long was charged with eight counts of murder on Wednesday.

Police have not yet said whether the shooting spree would be classified as a hate crime.

"With this mass shooting in Atlanta, I would like to think it would take the blinders off for folks, but the fact that a lot of the discussion is still sort of evading the fact that six Asian women were murdered and this denial of the fact that their race and their sex was part of this is still deeply problematic," said Marita Etcubañez, director of strategic initiatives for Asian Americans Advancing Justice (AAJC), a Washington, D.C.,-based nonprofit organization.

"I don't think the blinders are fully off yet," she said. "There's still a lot that we need to grapple with in this situation and just more broadly as a society."

Even with the bigger societal changes needed, Etcubañez and other advocates said they have been encouraged by the support that has come recently from outside the Asian American community.

Last year, AAJC partnered with Holliback! -- a nonprofit that provides training and education to end harassment -- to offer virtual training on bystander intervention in response to the increase in hate crimes against Asian Americans.

Since then, AAJC and Holliback! have trained more than 16,000 people in nonviolent ways to stand up for people being harassed.

"I think we were all kind of stunned with the number of people that have been registering for the trainings," said Etcubañez. "It's clear to me that people are eager to be able to do something."

Borja described the increased attention to violence against the Asian community in the United States as a "watershed moment." She has pivoted her own career in response so as to focus on anti-Asian racism research, which she conducts in partnership with Stop AAPI Hate. 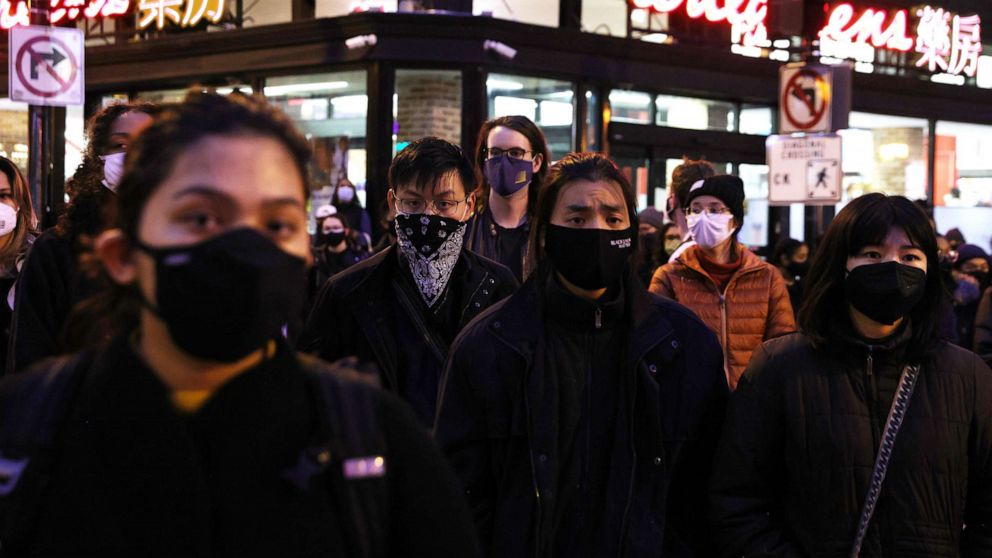 Alex Wong/Getty Images
Activists participate in a vigil on March 17, 2021, in the Chinatown area of Washington, D.C. following the Atlanta spa shootings that left eight people dead, including six women of Asian descent in Atlanta.

"I do think that we are in a moment where more people who are not Asian American are realizing that this is a problem, a longstanding problem," she said. "I've been encouraged by that and I haven't seen that level of solidarity and support at other moments in this year of anti-Asian racism associated with the pandemic."

MORE: Why anti-Asian hate incidents often go unreported and how to help

"We're actually pretty feisty and pretty outspoken," said Borja. "It's exciting to see Asian American women assert their power in this moment, and I think it's also maybe surprised some people."

1. Check in on Asian American friends, colleagues and family.

Borja said that statements of solidarity from individuals, schools and churches and businesses also have an impact, saying, "It doesn't seem like a big thing but it does help Asian Americans know that they're not alone."

2. Know how to intervene when you see harassment.

Holliback! instructs people to follow five steps when they feel they can safely intervene in a situation.

"When Holliback! talks about bystander intervention, we're not asking people to put an 'S' on their chest and strap on a cape and make some huge gesture that might make them feel uncomfortable," said Jorge Arteaga, the organization's deputy director. "We're always asking them to consider their own safety first, but we are asking them to please at least do one thing, if they feel comfortable doing it."

Holliback! offers free, one-hour long virtual trainings that teach people about the "5 D's," five steps Arteaga says are designed to take care of the person who is experiencing harm.

Distract: Create a distraction to deescalate the situation.

Delegate: Find someone else to help you.

"What we counsel is that you should, if you can, record, but you want to make sure you hand [the recording] to that person who experienced the harm so they can choose how to report it, if they even want to report it," said Arteaga.

Delay: Check in with the person after the harm has happened.

Direct: Create a boundary and then turn your attention to take care of the person being harassed.

The AAJC uses the phrase "spectrum of disrespect" to describe the different levels of hate that Asian Americans face, with something like the killings in Georgia on one end and a joke or an ill-intentioned compliment on the other end of the spectrum, according to Etcubañez.

"We talk about the spectrum to encourage people to take on the acts that we might view more as micro aggressions," she said. "Like the statements that some people might dismiss as not a big deal, but to address those things as they happen."

Giving a personal example, Etcubañez added, "As an Asian American, if I am complimented on my English, some people might say, 'Why would you object to that? That's a good thing,' but you might actually say to the person who offered you the so-called compliment, 'Why did you feel the need to compliment me on my English?,' just sort of break it down for them."

Etcubañez pointed out that while Asian Americans can turn slights into teachable moments, it is not their sole burden to bear. What people outside of the Asian American community say to each other and around each other also matters greatly.

"If you hear a racist joke, you could say, 'Why do you think that's humorous?,'" said Etcubañez. "It's in those moments where we can move the needle a little bit"

4. Advocate for policies that will help Asian Americans.

"One of the important things allies of the Asian American community can do right now is elevate the policy changes that they're calling for," said Borja, citing the need for more support, resources and education around anti-Asian American violence. 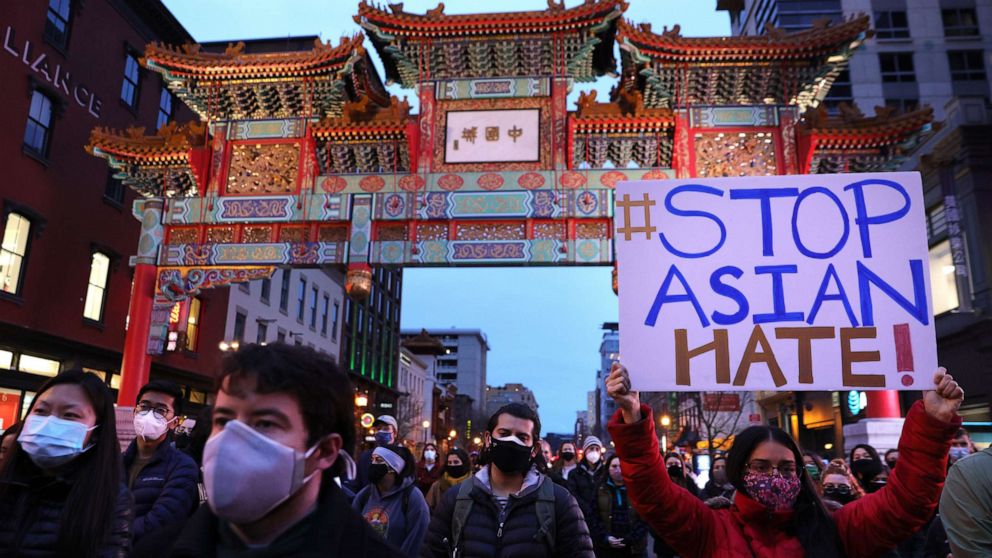 Alex Wong/Getty Images
Activists participate in a vigil in response to the Atlanta spa shootings in which eight people were killed, March 17, 2021, in the Chinatown area of Washington, D.C.

"Are we making sure that there are ways to help victims of hate incidents? Do people know to report hate incidents?," she said as examples of what's needed, considering that comprehensive and accurate statistics on anti-Asian hate are currently sparse. "Are we pushing for an educational curriculum that involves anti-bullying measures, that is inclusive and includes Asian American perspectives?"

Asian Americans Advancing Justice's Atlanta leaders have called on government leaders there to offer "robust and responsive crisis intervention resources," noting in a statement, "In Georgia, as in many states across the country, systemic disinvestment from and criminalization of communities of color means that we do not have the infrastructure or resources in place for effective community safety, a robust social service safety net, and in-language support."

"During this time of crisis for our AAPI community, we call on our local and state government to provide robust and responsive crisis intervention resources, including in-language support for mental health, legal, employment, and immigration services," the statement continued. "It is time for Georgia to invest in transformative justice that begins with cross racial dialogue and community-building that address the root causes of violence and hate."