Michelle Obama shared a video on Instagram, recounting the first time she met the late monarch, who died earlier this month.

"The very first time I met Her Majesty, the queen, was I believe back in April 2009," the former first lady began in the two-minute message. 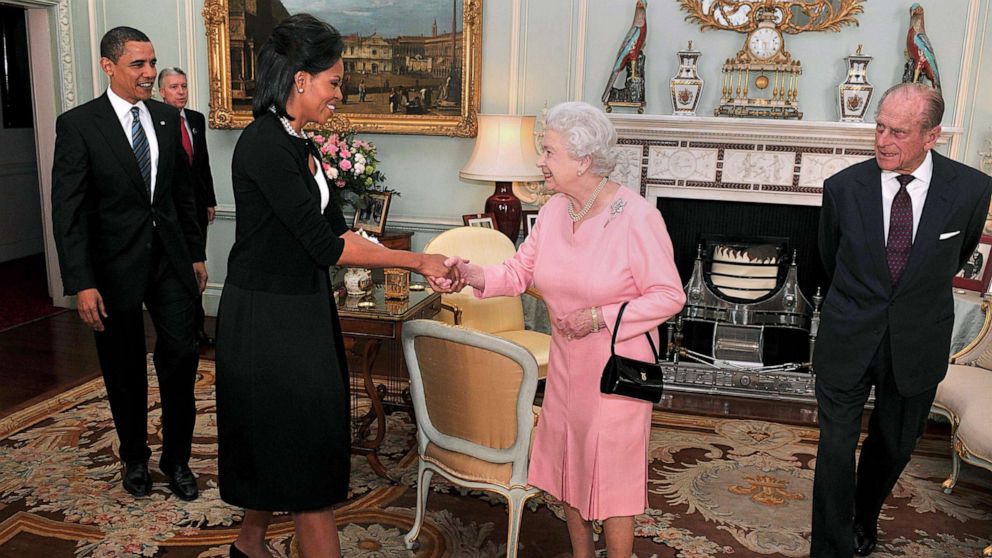 John Stillwell/Pool via Getty Images
President Barack Obama and his wife Michelle Obama meet with Queen Elizabeth II and Prince Philip, Duke of Edinburgh, during an audience at Buckingham Palace on April 1, 2009 in London.

"Barack had just been elected president and it was our very first trip overseas and I still remember how nervous I felt," Michelle Obama said, referring to her and then-President Obama's trip to the United Kingdom for the G-20 summit from March 31 to April 3, 2009.

"I'd never met royalty before and here I was meeting Her Majesty, perhaps the most well-known woman in the world, but I have to tell you, all of that disappeared the moment I met her," she recalled. "She was welcoming. She was incredibly warm, kind, personable, funny. I liked her immediately."

At the time, the first lady was criticized for touching the queen, widely considered an improper act toward the monarch. 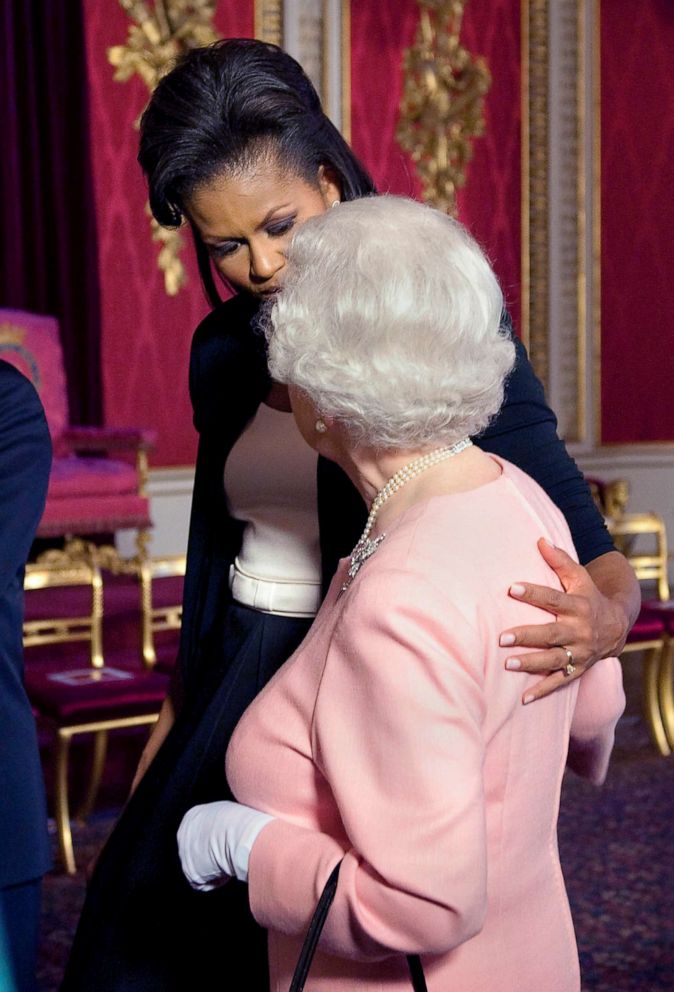 Michelle Obama's recollection of Elizabeth echoes the anecdotes and remembrances others have shared about the longest-reigning sovereign in British history, who was known to crack a joke even at a White House state dinner.

In addition to recalling her first meeting with the queen, Obama shared a memory relatable to anyone who has ever had to stand for a long period in high heels.

MORE: Queen Elizabeth II remembered for her sense of humor

"Later on that day, I found myself standing next to her again at a reception and the two of us looked down at our heels and I looked back over at her and then we just had a moment of recognition, both of us realizing that our feet were hurting, and I remember looking back at her, and then back around the room just thinking, when is all of this standing around with world leaders gonna finally wrap up?' and we both started laughing," Michelle Obama said.

"That moment has always meant so much to me. I put it in my book, 'Becoming', because it was so important," Obama continued, referring to her memoir, which was first published in 2018. "In the years since, Her Majesty has meant so much to our entire family. She's shown such kindness and generosity, especially toward our daughters and my mom during a separate trip we made there."

"Through it all, she's always been extraordinary. Her charm, her levelheadedness has proven to me that she is far more than just a figurehead. She is a true embodiment of grace and elegance and dignity for us, and for many others around the world," she concluded.

Former President Obama also shared his recollection of meeting the queen in a video post Monday. 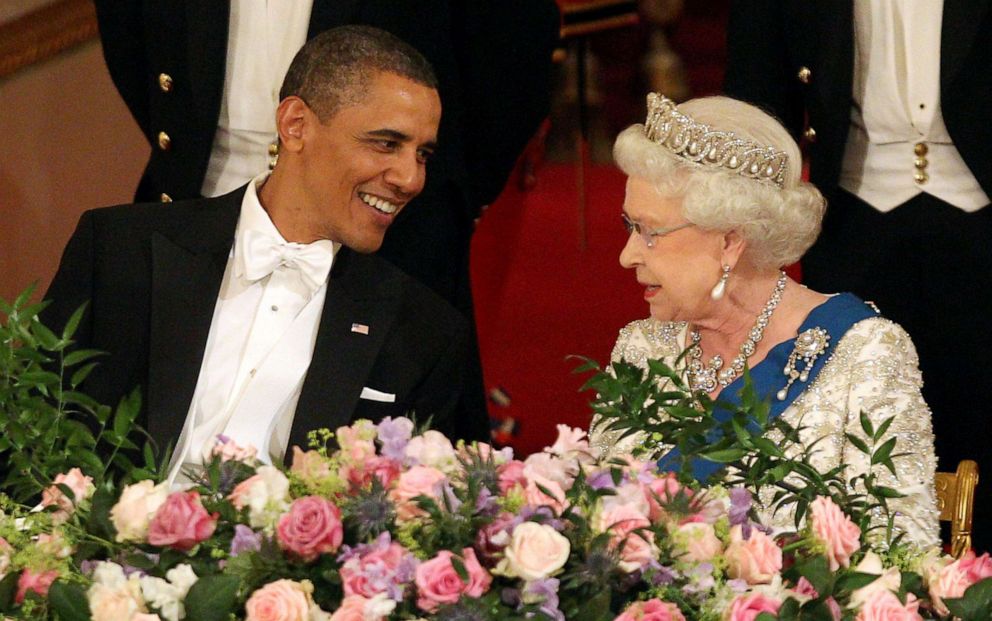 Wpa Pool/Getty Images
President Barack Obama and Queen Elizabeth II during a State Banquet in Buckingham Palace, May 24, 2011, in London.

"She reminded me very much of my grandmother, which surprised me, not just in appearance but also in matter, very gracious, but also no-nonsense, wry sense of humor," the former president said. "She could not have been more kind or thoughtful to me and Michelle."

"Shortly thereafter, Michelle and Malia and Sasha, my two daughters, had occasion to go back to England. Buckingham Palace reached out and Her Majesty had invited Michelle and the two girls to tea. She had then offered the girls to drive in her golden carriage around the grounds of Buckingham Palace," the father of two recounted. "It was the sort of generosity and consideration that left a mark in my daughters' lives that's still there."

Barack Obama then went on to describe the queen's personality and indelible traits, as he remembered them. "The queen was an excellent listener. She had a genuine curiosity, although she was impatient to get to the point," he said. 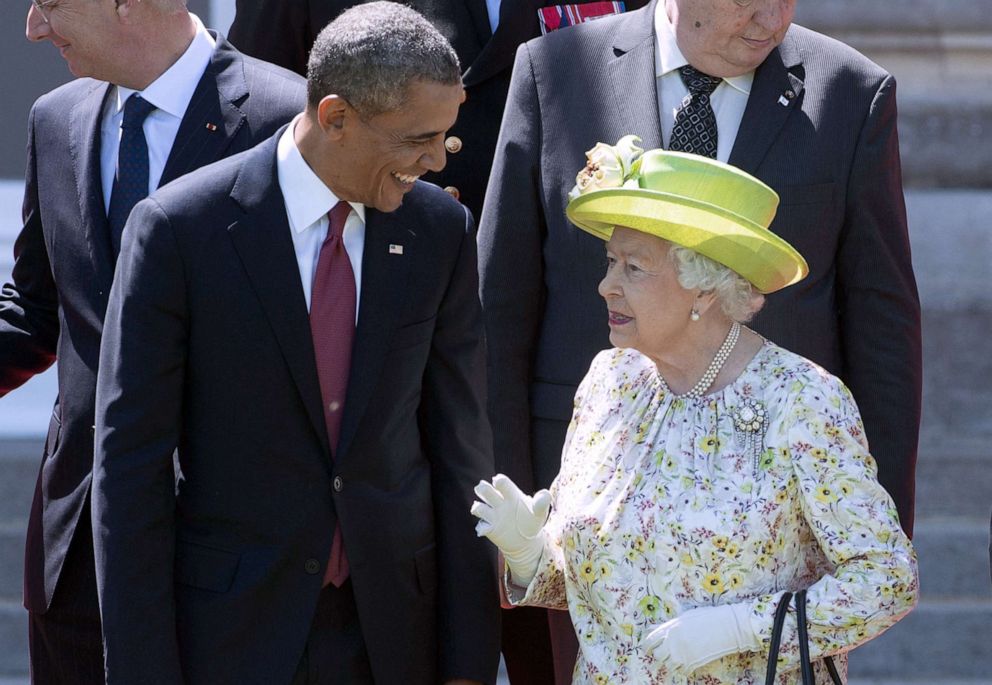 He wrapped up his own video message with an anecdote from the May 2011 state dinner held at Buckingham Palace, which he and the former first lady attended.

"The queen was dressed up quite a bit for the state dinner and it was a little bit concerning for Michelle because as a gift to Her Majesty, Michelle had selected a small, modest broach of nominal value," Obama recalled. "We reciprocated the following evening with a dinner that we hosted at the American Embassy. But the one thing we immediately notice is that she's wearing the brooch that Michelle had given and it was an example of the subtle thoughtfulness that she consistently displayed not just to us but everybody who she interacted with."

"She was very mindful of guests at Buckingham Palace not overstaying their welcome. She was looking at her watch and at some point said, 'Well, OK, it's time to go,'" Obama added. "And the same was true as a guest, she wasn't interested in overstaying her welcome. She looked at her watch at a certain point and said, 'I think we need to wrap this up.' The combination of a sense of duty and a clear understanding of her role as a symbol for a nation and as the carrier of a certain set of values, combined with a very human quality of kindness and consideration, I think that's what made her so beloved not just in Great Britain but around the world."

The Obamas met with the queen numerous times throughout the course of Barack Obama's two terms in office as president. In 2016, they met with Elizabeth for lunch for her 90th birthday at Windsor Castle.

Following the queen's death, the Obamas released a statement on social media reflecting on their close relationship with the sovereign.

"Michelle and I were lucky enough to come to know Her Majesty, and she meant a great deal to us. Back when we were just beginning to navigate life as President and First Lady, she welcomed us to the world stage with open arms and extraordinary generosity. Time and again, we were struck by her warmth, the way she put people at ease, and how she brought her considerable humor and charm to moments of great pomp and circumstance," they said in their statement.

"Like so many, Michelle and I are grateful to have witnessed Her Majesty's dedicated leadership, and we are awed by her legacy of tireless, dignified public service," they continued. "Our thoughts are with her family and the people of the United Kingdom at this difficult time."