A trio of females will take three giant leaps forward for women in space later this month.

NASA has announced the first-ever all-female spacewalk will take place on March 29, right at the end of Women’s History Month.

NASA astronauts Anne McClain and Christina Koch will carry out the spacewalk with the assistance of Kristen Facciol, a Canadian Space Agency flight controller. 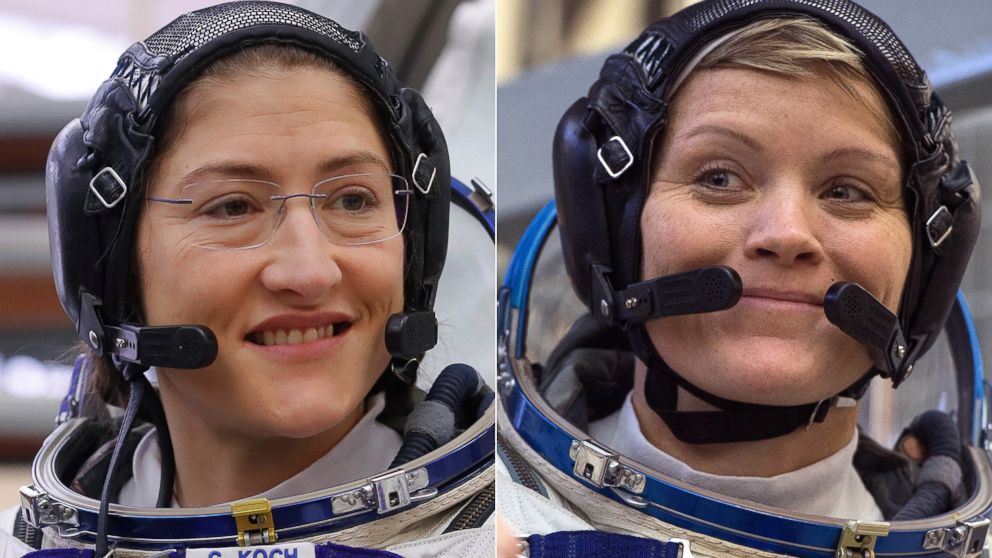 Reuters, Getty Images, FILE
NASA astronauts Christina Koch, left, and Anne McClain, Star City near Moscow, Russia, during their training for their upcoming mission which will include the first-ever all-female spacewalk.

Facciol will be on the console at NASA’s Johnson Space Center in Houston. McClain and Koch are part of the Expedition 59 crew at the International Space Station.

McClain and Koch's spacewalk is expected to last seven hours, according to NASA. A spacewalk is defined by NASA as "anytime an astronaut gets out of a vehicle while in space."

The goal of McClain and Koch's spacewalk is to upgrade batteries on the space station, a NASA spokeswoman told "Good Morning America."

(MORE: 10 moments that proved these female Marvel heroes were no damsels in distress)

Facciol, the flight controller, celebrated her history-making assignment in a tweet with the hashtags #WomenInSTEM #WomenInEngineering and #WomenInSpace.

I just found out that I’ll be on console providing support for the FIRST ALL FEMALE SPACEWALK with @AstroAnnimal and @Astro_Christina and I can not contain my excitement!!!! #WomenInSTEM #WomenInEngineering #WomenInSpace

If while I was growing up someone told me that one day I would get to represent the #Canadian and #NASA flags in a single photo, I would have never believed them. Today I proudly get to do just that. @csa_asc @NASA_Johnson ???????? pic.twitter.com/gbDJO5ERpk

Koch, a Michigan native, was selected as a NASA astronaut in 2013. She is scheduled to launch next week and will join the International Space Station as a flight engineer, according to NASA.

First fit check of our actual spacecraft - the Soyuz rocket! This will be the last time we test the systems while wearing our launch and landing space suits. Great to see the real deal with the crew! pic.twitter.com/H7SdhgFuSn

McClain also joined NASA in 2013, the year NASA's astronaut class was 50 percent female. She is a lieutenant colonel in the U.S. Army and a Senior Army Aviator with more than 2,000 flight hours, according to NASA. She has been stationed at the International Space Station since December.

Earth’s 3rd day started with getting the blood (plasma?) pumping! First the treadmill, then weights - he even got some deadlifts in with me. It is important to exercise every day, not just for our muscles but also to protect our bones from losing density in microgravity. pic.twitter.com/gIsiKt4K8S