The life of Queen Elizabeth II, who died Sept. 8 at age 96, will be celebrated in a funeral service Monday after more than a week of tributes honoring the long-reigning monarch.

The queen's funeral -- which she played a large role in planning -- will take place at Westminster Abbey. 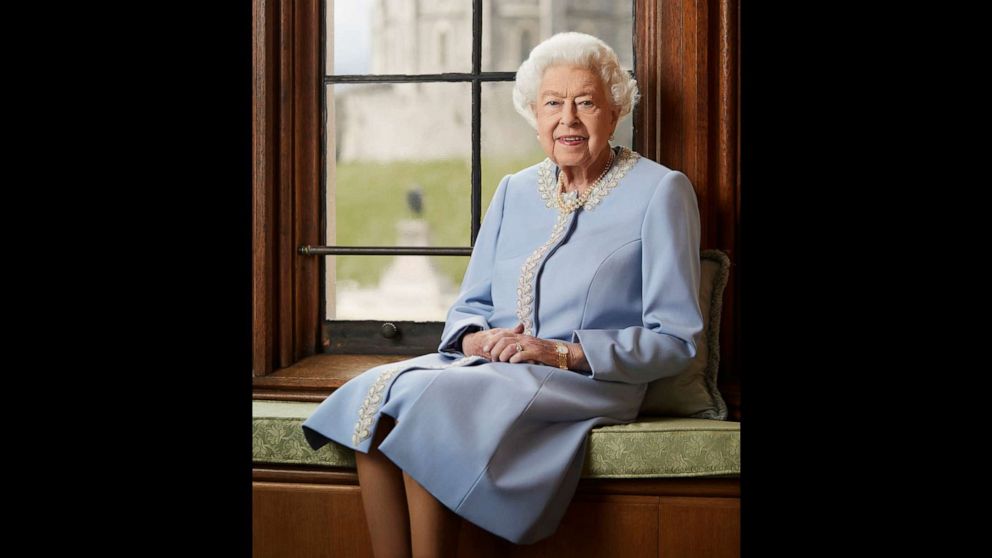 Here are all the details we know so far.

When and where the funeral will take place?

The funeral will be held at Westminster Abbey, making the queen the first sovereign to have a funeral there since 1760.

Around 2,000 invited guests will attend the funeral at Westminster Abbey. 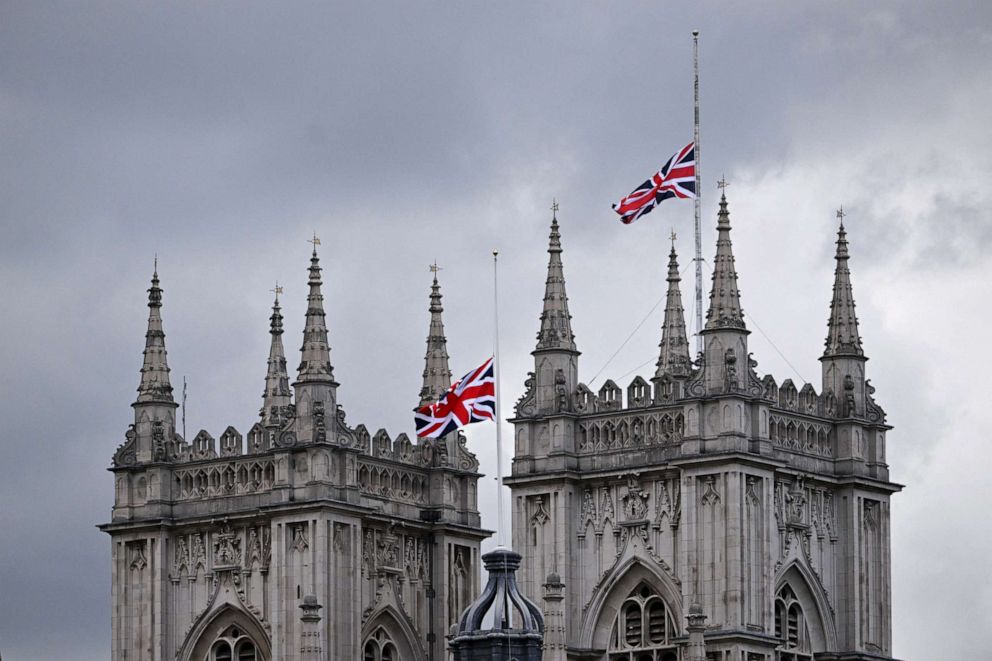 Sebastien Bozon/AFP via Getty Images
The Union Jack flag flies half mast at Westminster Abbey in London on September 15, 2022, following the death of Britain's Queen Elizabeth II on September 8.

The day of the queen's funeral will be a public holiday in the U.K.

How the queen's coffin will arrive at Westminster Abbey

Just after 10:30 a.m. local time on the day of the funeral, a procession will begin to transport the coffin from Westminster Hall to Westminster Abbey for the funeral.

The vast procession will include musicians, members of the military and members of the royal family, including King Charles III; Anne, the Princess Royal; Princes Edward, Andrew, Harry and William; and Peter Phillips, who will all walk behind the coffin. 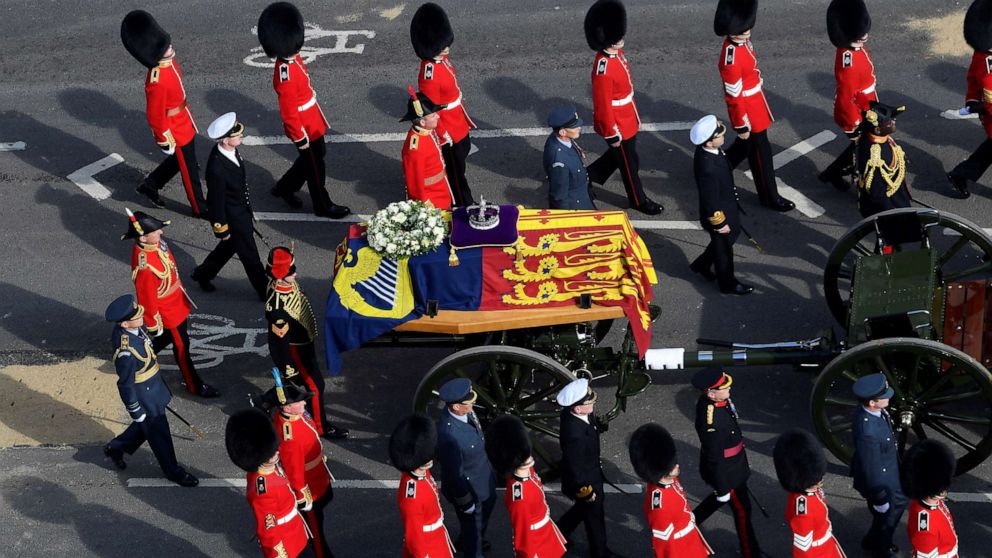 Toby Melville/Pool via Reuters
The procession of the coffin of Britain's Queen Elizabeth moves from Buckingham Palace to Westminster Hall for her lying in state, in London, Sept. 14, 2022.

Who is expected to attend the funeral?

Members of the royal family will all be in attendance at the funeral, including the queen's four children, her eight grandchildren and their spouses.

It is not yet known whether the queen's great-grandchildren, such as Princes George and Louis and Princess Charlotte, will attend with their parents.

Other mourners at the queen's funeral will include over 500 heads of state and dignitaries from around the world, including President Joe Biden and First Lady Jill Biden.

Also in the audience at Westminster Abbey will be some of the 15 U.K. prime ministers who served during the queen's reign, including current Prime Minister Liz Truss, who was the last public official to meet with the queen in person before her death.

How the queen's coffin will be adorned

The queen's coffin is draped with the Royal Standard, the flag representing the sovereign and the U.K. During her reign, the Royal Standard was flown on her car and aircraft on official journeys and at royal palaces when the queen was in residence.

The wreath atop the coffin is a collection of white roses, white dahlias and foliage from the gardens at Balmoral and Windsor.

Also atop the coffin, on a velvet cushion, lies the Imperial State Crown, the crown the monarch wears upon leaving Westminster Abbey after the coronation. 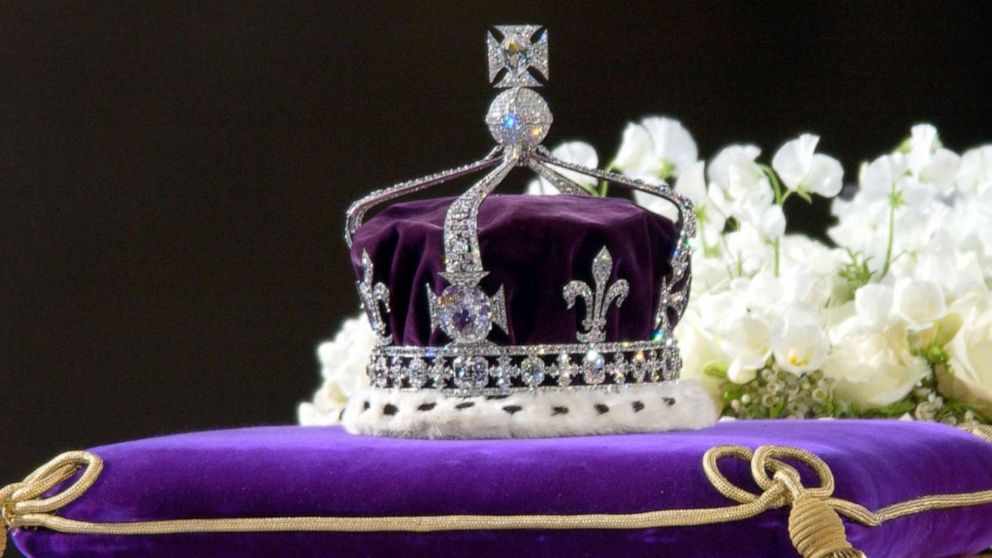 The crown -- which contains 2,868 diamonds, 17 sapphires, 11 emeralds, 269 pearls and four rubies -- was made in 1937 for the coronation of the queen's father, according to Historic Royal Palaces, the organization that oversees the Tower of London, where the crown jewels are held.

The 317-carat Second Star of Africa, also known as the Cullinan II, is the most valuable stone in the crown, which the queen wore at her 1953 coronation, along with the St. Edward's Crown. 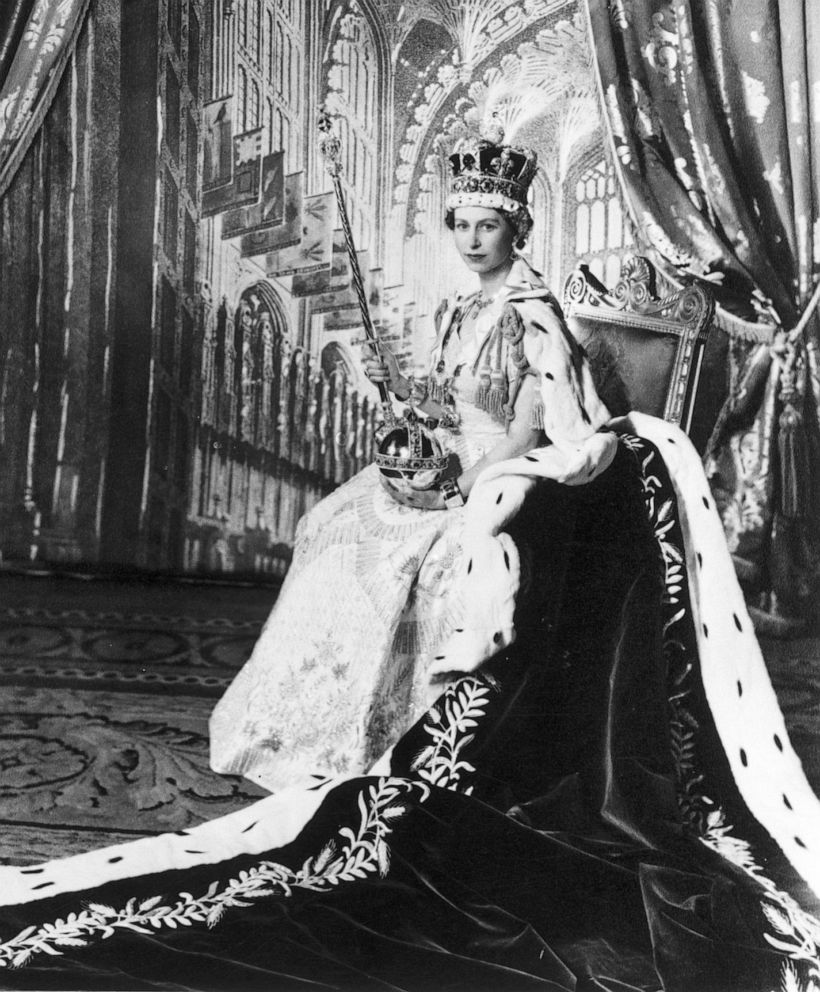 The sceptre has been used at every coronation since 1661 and features the 530-carat Cullinan I diamond, the largest gem-quality uncut diamond ever found. The diamond was discovered in a South African mine in 1905 owned by its namesake, Thomas Cullinan.

The orb, described as a "golden globe surmounted by a cross," is given to the monarch when they are crowned to remind them "that their power is derived from God," according to Historic Royal Palaces. 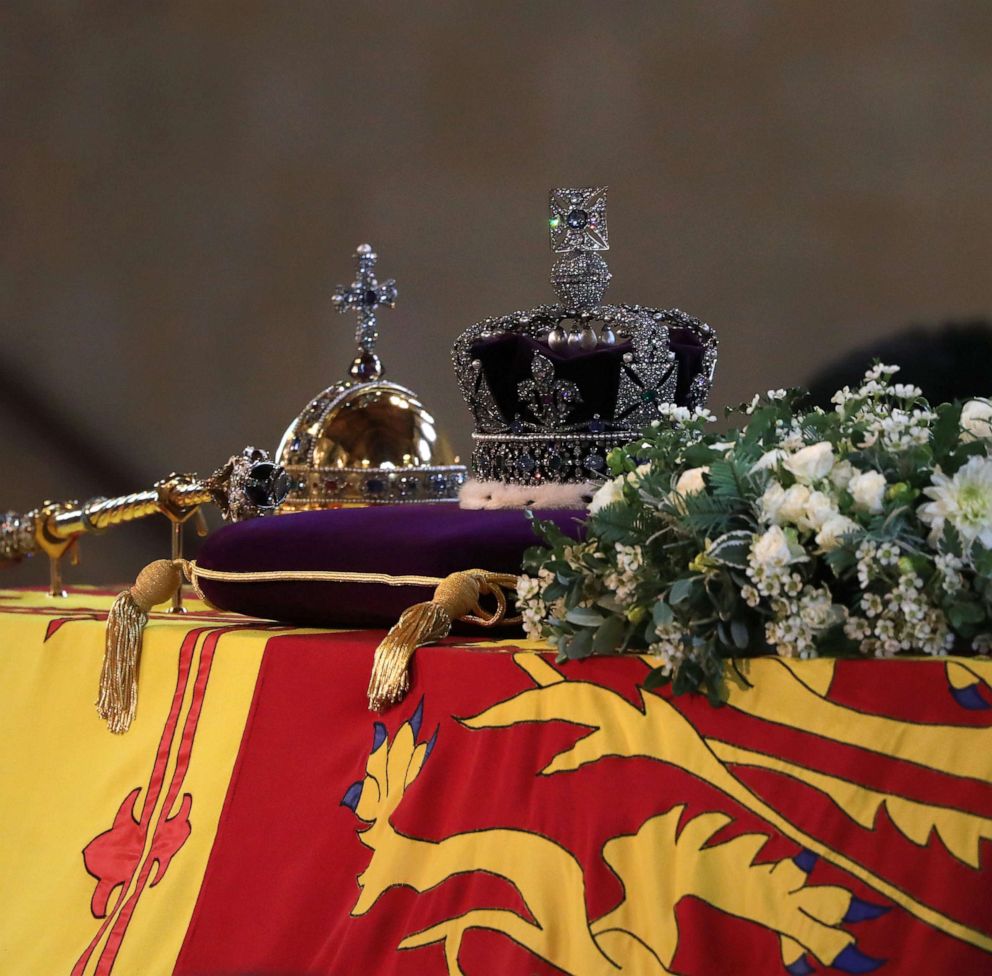 Hugo Philpott/UPI via Shutterstock
The coffin of Queen Elizabeth II adorned with the Royal Standard and the Instruments of State, the Imperial State Crown, the Orb and the Sceptre, in Westminster Hall, Sept. 15, 2022.

With the crown jewels back in the spotlight following the queen's death, there have been renewed calls for some of them to be returned to their countries of origin.

The Cullinan diamond was purchased by the government in Transvaal, South Africa, where it was found, and "presented (1907) to the reigning British monarch, King Edward VII," according to Encyclopedia Britannica

The Royal Collection Trust states that the diamond was presented to the king "as a symbolic gesture to heal the rift between Britain and South Africa after the Boer War." 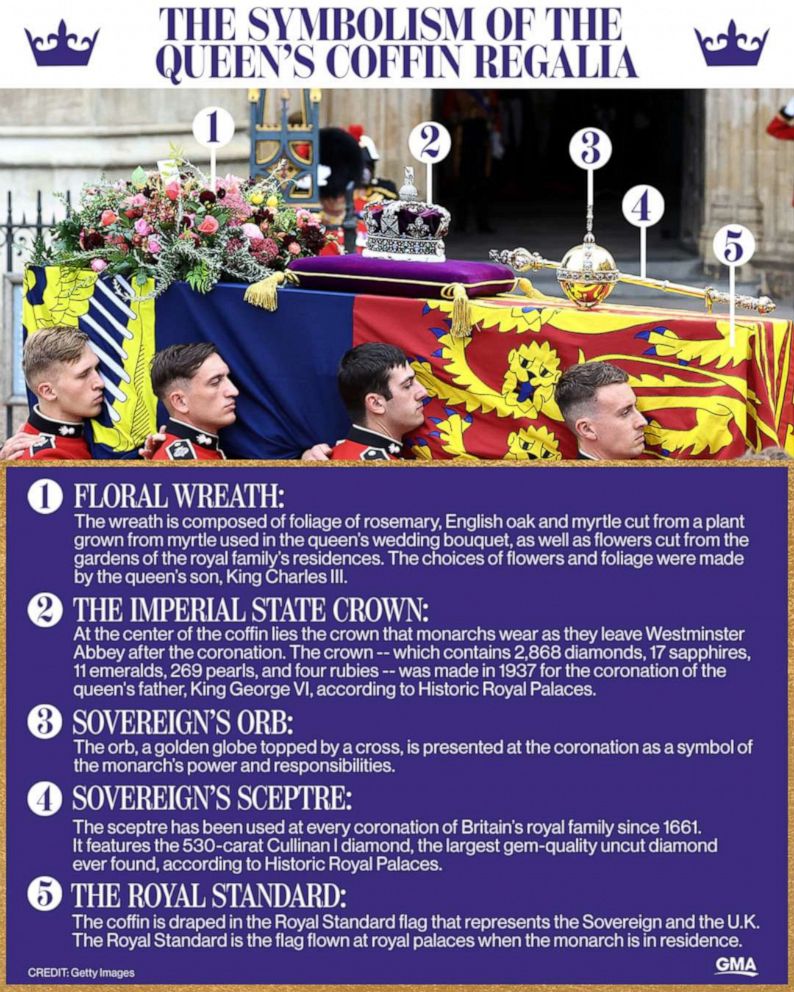 ABC News Photo Illustration
The coffin of Queen Elizabeth II, who reigned for 70 years, is adorned with the Imperial State Crown.

What will happen during the funeral

The tightly choreographed service is expected to last just over one hour. The service will be led by the Very Reverend Dr. David Hoyle, the dean of Westminster.

Among those reading and saying prayers at the service are the archbishop of York, the U.K. prime minister and the secretary general of the Commonwealth, and the cardinal archbishop of Westminster.

Justin Welby, the archbishop of Canterbury, will deliver the sermon.

Near the end of the service, at around 11:55 a.m. local time, two minutes of silence will be observed inside Westminster Abbey and throughout the U.K.

The service will end with the national anthem and a lament played by the royal piper, Pipe Major Paul Burns of The Royal Regiment of Scotland.

The addition of Burns to the service came as a personal request from the queen, who liked to be woken every morning by bagpipe music, according to ABC News royal contributor Omid Scobie.

How to watch the funeral

The queen's funeral will be broadcast by television networks around the world and livestreamed online.

What members of the royal family will wear at the funeral

As working members of the royal family, Charles, Anne, Edward and William will be dressed in military uniform at the queen's funeral, according to Buckingham Palace.

Andrew and Harry, the queen's son and grandson, respectively, will not be in uniform as they are no longer working royals. 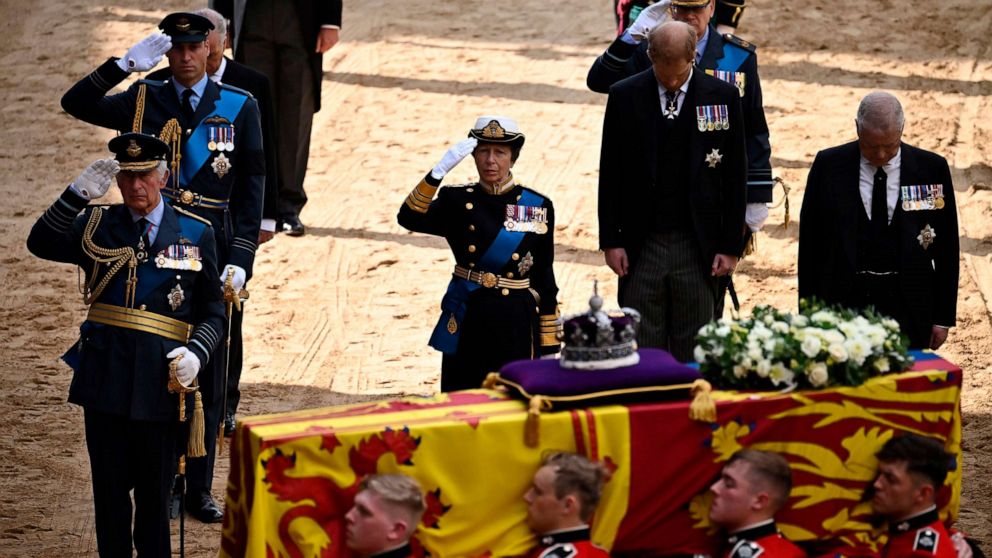 Other members of the royal family, including Camilla, the Queen Consort; Kate, the Princess of Wales; Meghan, the Duchess of Sussex; and Sophie, the Countess of Sussex, will wear black, as they have since the queen's death was announced.

Female family members will also likely follow tradition in wearing black veils, known as mourning veils, covering all or some of their faces.

Where the queen's coffin will be taken after the funeral

Following the funeral, the queen's coffin will travel in a procession from Westminster Abbey to Wellington Arch at Hyde Park Corner.

Charles will again join his siblings Anne, Andrew and Edward, and his sons William and Harry, as well as his nephew Peter Phillips, in walking in the procession.

From Wellington Arch, the state hearse will drive the queen's coffin to Windsor, with members of the royal family following by car.

Once in Windsor, the state hearse will carry the coffin along the Long Walk, with Charles and royal family members joining the procession by foot at the Quadrangle.

The procession will take the coffin to the queen's final resting place at St. George's Chapel, on the grounds of Windsor Castle.

What the queen will be buried with

At St. George's Chapel, a committal service will be held, attended by members of the royal family and personal staff who work or have worked for the queen.

Before the final hymn of the service, the Imperial State Crown, orb and sceptre will be removed from the queen's coffin and placed on the altar.

Following the hymn, Charles will place the Grenadier Guards' Queen's Company Camp Colour -- a smaller version of the Royal Standard -- on the coffin.

At the same time, Lord Chamberlain Andrew Parker -- the most senior official in the queen's royal household – will "break" his Wand of Office and place it on the coffin, signifying the end of the reign.

As the queen's coffin is lowered into the royal vault, the dean of Windsor will say the final prayers and the royal piper will play a final lament.

Where the queen will be buried

The queen will be buried at the King George VI Memorial Chapel at St. George's Chapel, alongside Prince Philip, her beloved husband, who died last year at the age of 99. 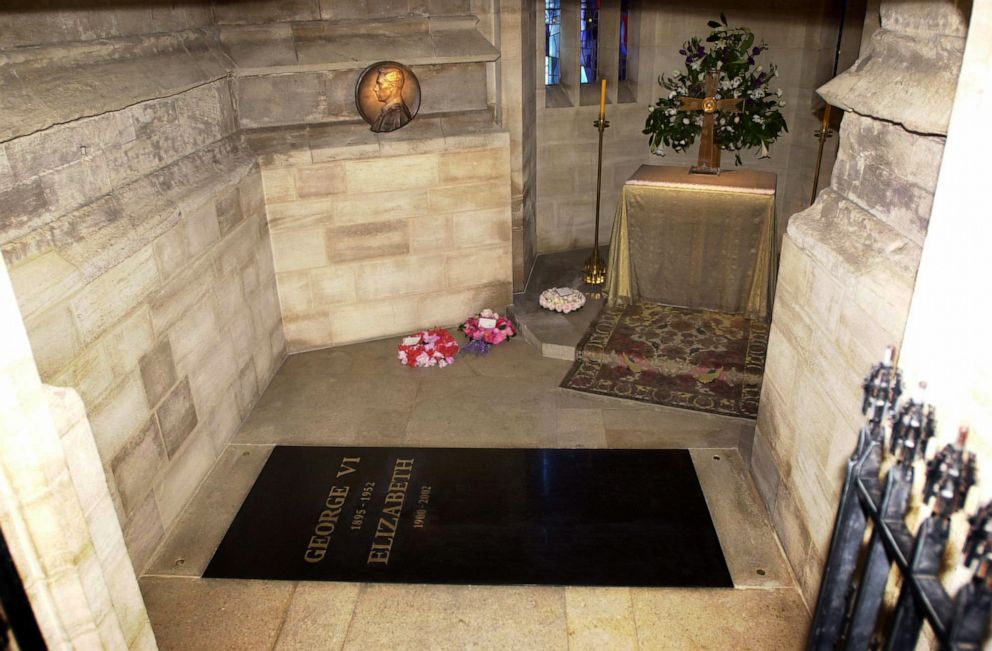 The burial service will be private, attended only by members of the royal family.