The stakes for the 2020 election are high for everyone, but particularly for Black women.

The election on Nov. 3 comes as Black women have been hit disproportionately hard by the coronavirus pandemic, both in cases of COVID-19 and in jobs lost and financial hardship.

The election also comes as Black women feel the sting of racial unrest across the country, with Black mothers speaking out about their fear for their children's lives and joining protests in cities across the U.S.

MORE: Michelle Obama's 'VOTE' necklace and more stylish picks that get out the vote 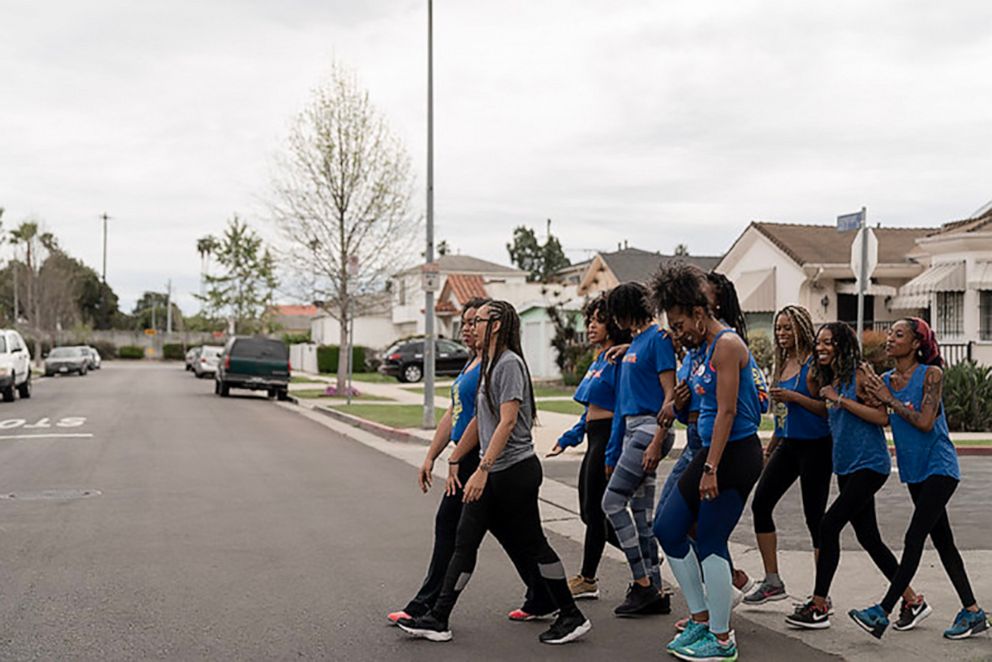 GirlTrek
GirlTrek is a national health movement aimed at helping Black women and girls through walking.

"Our service is walking for better health because we’re dying at higher and faster rates than any other group in the country, from preventable disease," Morgan Dixon, 43, a co-founder of GirlTrek, told "Good Morning America." "But walking for healing is not enough."

"We actually have to walk for justice now, because we’re not just fighting in normal circumstances," she said. "We also have to walk to change the systemic barriers that are a weight on our shoulders, on our families, on our communities."

GirlTrek, the organization that Dixon co-founded 10 years ago with her college friend Vanessa Garrison, this month launched Black Girls Justice League, its effort to mobilize its more than 850,000 members to walk to the polls on Election Day. 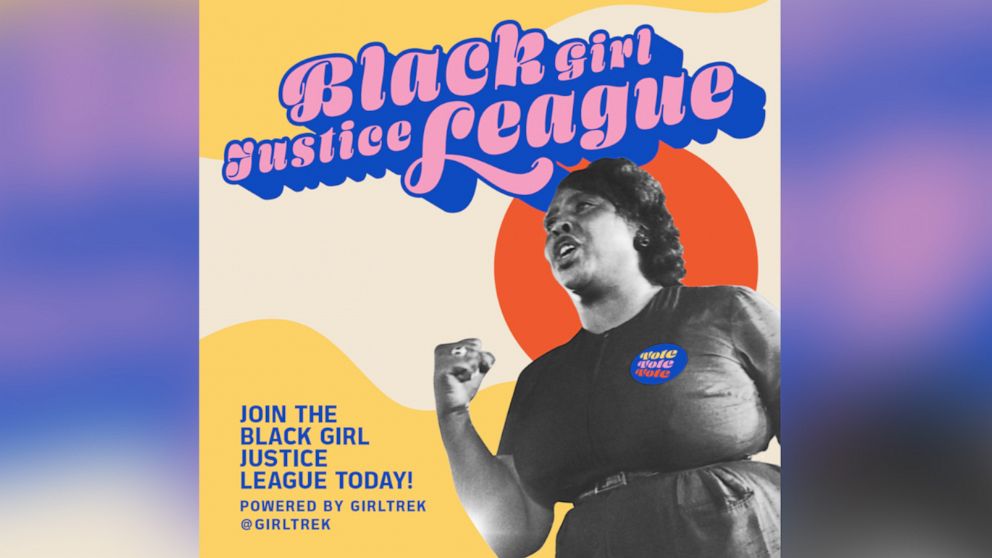 GirlTrek
GirlTrek, a national health movement aimed at helping Black women, is mobilizing its members for the 2020 election.

This year, with the focus on early voting due to the coronavirus pandemic, GirlTrek is also organizing members to walk to their local post office ahead of the election to deliver their absentee ballot. The organization is also planning to have volunteers at polls across 10,000 precincts on Election Day.

MORE: 3 things to know about voting 3 months ahead of the 2020 election

WATCH: Election year 2020 by the numbers

1:53
There is more at stake than just the presidency.

"We say [at GirlTrek] when Black women walk, things change, from Harriet Tubman who literally walked herself to freedom to the women of the Montgomery Bus Boycott who walked to bring about the biggest civil rights legislative change that we’ve ever seen," said Garrison, 42. "We are trying to increase voter turnout and to educate people on the issues on the ballot that directly impact Black women."

With a presidential election at stake, the turnout of Black women at the polls on Election Day will be closely watched to see if they can exceed their already above average turnout. In the 2018 midterm election, 55% of eligible Black women voters cast ballots, six percentage points above the national turnout, according to the U.S. Census Bureau.

"This is a pivotal, historic election for everyone in our country and no matter where you vote, how you vote, you need to vote on the issues that increase the livelihood of your community," said Dixon. "We’re asking women to really vote what matters. It is health care. It is environmental issues. It is affordable child care. It is all of the things that stop us from living our healthiest, most fulfilled lives."

Dixon and Garrison describe GirlTrek as a "lifesaving sisterhood" that encourages Black women to get outside and walk as a form of "radical self-care."

"For the last 10 years there’s been a quiet revolution happening in neighborhoods across the country where at 4 a.m. and 5 a.m. and after work when people are tired, women have been pushing through and lacing up their sneakers and they have been leading this walking revolution with Morgan and I," said Garrison. "For GirlTrek, our personal protest is walking outside of our front doors every day, lacing up our sneakers." 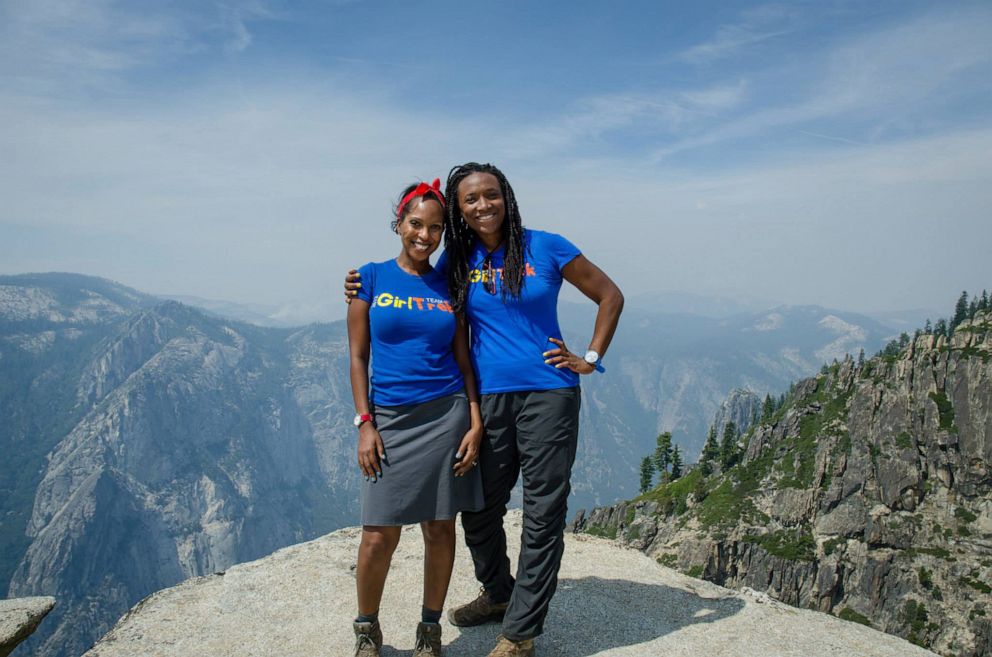 Dixon and Garrison's initial inspiration for launching GirlTrek was the health crisis they saw facing Black women, physical health problems that in turn, they say, affected their mental health.

Black women in the U.S. are more likely to die from pregnancy or childbirth than women of any other race, according to the U.S. Centers for Disease Control and Prevention (CDC).

They also have a life expectancy that is four years shorter than white women, according to the U.S. Department of Health and Human Services (HHS). Black women also have higher rates of deadly diseases including heart disease, stroke and diabetes, data shows.

The reasons for Black women's worse health outcomes range from lack of access to quality healthcare to income inequality to systemic racism in the medical field, experts say. "Compared to white women, Black women are more likely to be uninsured, face greater financial barriers to care when they need it and are less likely to access prenatal care," according to a 2018 report from the National Partnership for Women and Families, a nonprofit organization focused on improving the lives of women and families.

"Staying alive is the most radical thing you can do as a Black person in America and GirlTrek, as the largest health organization, has been asking Black women to stay alive for 10 years," said Dixon. "We’ve been saying that Black women are dying faster and younger and at higher rates than any other group of people in America and this is injustice." 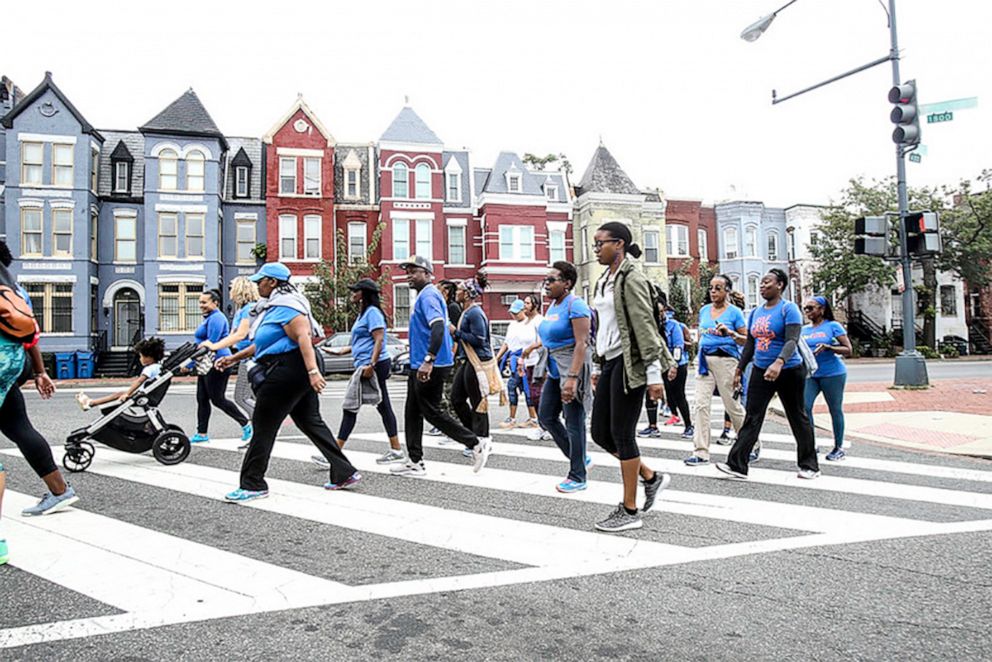 GirlTrek
GirlTrek is a national health movement aimed at helping Black women and girls through walking.

Dixon and Garrison cite statistics showing many Black women engage in little to no physical activity in their leisure time when they describe walking as a form of both protest and radical self-care.

"Our leisure time, because of economic circumstances, is greatly limited, so the last thing we want to do after laboring for hours on end is to get on the treadmill," said Dixon. "We are asking Black women to take back our time and heal our bodies one step at a time."

The women of GirlTrek walk alone, they walk in groups and they have walked the paths of their ancestors, including retracing Tubman's 100-mile journey to freedom from slavery. This year the women of GirlTrek listened to the stories of their ancestors as they walked through the organization's first Black History Bootcamp, a 21-day series of walking meditations that told the stories of Black women who worked to change the world.

Now, the founders of GirlTrek say they want Black women to change the world again in this election.

"It’s so clear to me that we’ve been here before and that for generations there have been efforts to really dismantle the Black community, and yet there have been powerful acts of resistance by people who are organizers, like Harriet Tubman," said Dixon. "I am most proud of all of the women who came before us, all of the named and unnamed and unsung heroes who came before us, so that we can stand now with such courage and pride and such absolute resoluteness that not on our watch, that this is not going to do down like this, that too much has gone on to sit on the sidelines."

"Count on Black women to show up," she said.