Kate, the Duchess of Cambridge, had her own "Hidden Figures" moment Tuesday when she visited Bletchey Park, the home of secret code breakers during World War II.

Kate's grandmother and great aunt both worked at Bletchey Park, according to Kensington Palace. The Duchess of Cambridge was able to see her relatives' names, Valerie and Mary Glassborow, on the Codebreakers’ Wall at Bletchey Park.

The Duchess of Cambridge’s Grandmother and Great Aunt, Valerie and Mary Glassborow, who worked at @bletchleypark, the home of British codebreaking during the Second World War — are the latest additions to Bletchley’s Codebreakers’ Wall. pic.twitter.com/LpeRRpbk0e

Kate visited Bletchey Park to view a special exhibition marking the 75th anniversary of the D-Day landings. She met other women there who, like her own relatives, were part of the effort to feed information to Allied forces before D-Day, the day in 1944 when Allied troops landed in Normandy, France.

The Duchess of Cambridge with @BletchleyPark Veterans Elizabeth Diacon, Georgina Rose, Audrey Mather and Rena Stewart — who all worked to feed crucial information to Allied forces in the critical months, weeks and days leading up to D-Day during #WW2. pic.twitter.com/a5VF5OQUuy

Today The Duchess of Cambridge is visiting @BletchleyPark to view a special D-Day exhibition in the newly restored Teleprinter Building, marking the 75th anniversary of the D-Day landings. pic.twitter.com/a5QyqgIiXF

Kate stood out at the exhibit Tuesday in a long-sleeve, flowing polka dot dress with white cuffs, white buttons and a white collar. According to royal fashion watchers, the navy dress was designed by Alessandra Rich. 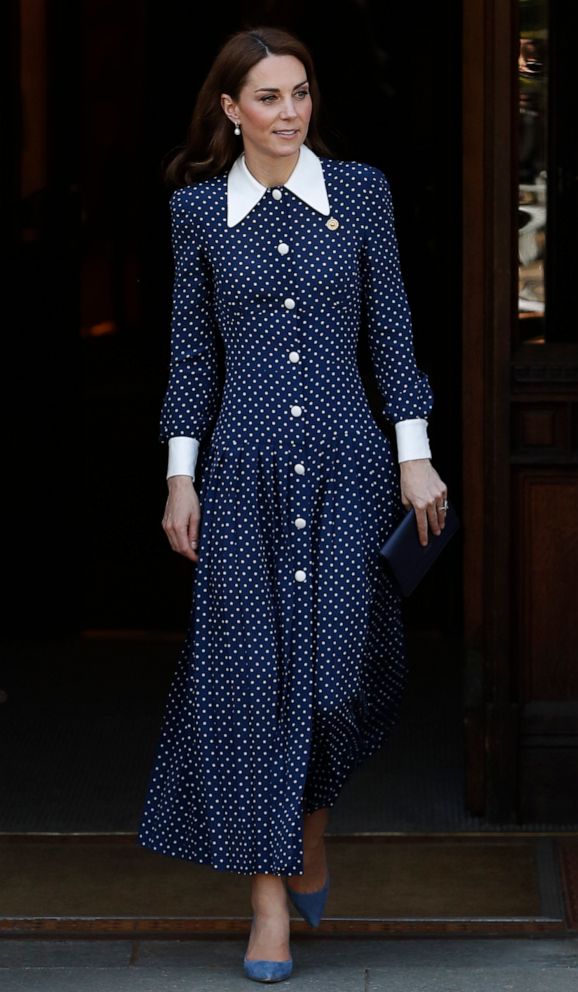 The Duchess of Cambridge was seen in the same dress last November, when she and her husband, Prince William, posed in a family portrait with their three kids, as well as Prince Harry, Meghan, Prince Charles and Camilla to mark Prince Charles’s 70th birthday.

(MORE: The life and times of Duchess Kate)

Kate, 37, is well-known for re-wearing and re-fashioning clothes for her many public appearances. When she stepped out for a gala in March, for example, Kate rewore a black floral Alexander McQueen gown to which she added capped sleeves, creating a new look.

(MORE: Kate Middleton steps out in black tie-up booties: Get the look)

After viewing the D-Day exhibit, Kate joined Prince William in making a special trip to Windsor to meet their new nephew, Archie Harrison Mountbatten-Windsor. William and Kate met the son of William's brother, Prince Harry, and his wife, Meghan, the Duchess of Sussex, at the family's Frogmore Cottage home.