We all want to live healthy lifestyles, and many of us follow along with the latest medical research.

Getting large amounts of people to join research studies, however, can be a different story.

The types of long-term trials meant to look at large amounts of people, though, “offer no perceived immediate benefit to the participant (and) are more difficult to enroll and potential subjects are less likely make frequent visits to a researcher’s office,” he added.

But what if joining a research study were as easy as downloading an app on your phone? That’s what Apple is doing Thursday with the launch of the Research app, a free application for iPhone and Apple Watch through which users can enroll in large-scale research studies addressing a variety of health topics including women’s health, heart and movement, and hearing.

In an interview with ABC News last week in New York City, Jeff Williams, Apple's chief operating officer, told Dr. Jennifer Ashton, ABC News' chief medical correspondent, “If you can take away the friction people will participate. What we are doing is making this a really simple process.”

Bernstein, who is not working with Apple on this launch, says the ability to sign up for studies and participate remotely is a big deal.

“More people will be able to participate and data can be collected 24/7, which will make the conclusions more real," he said. 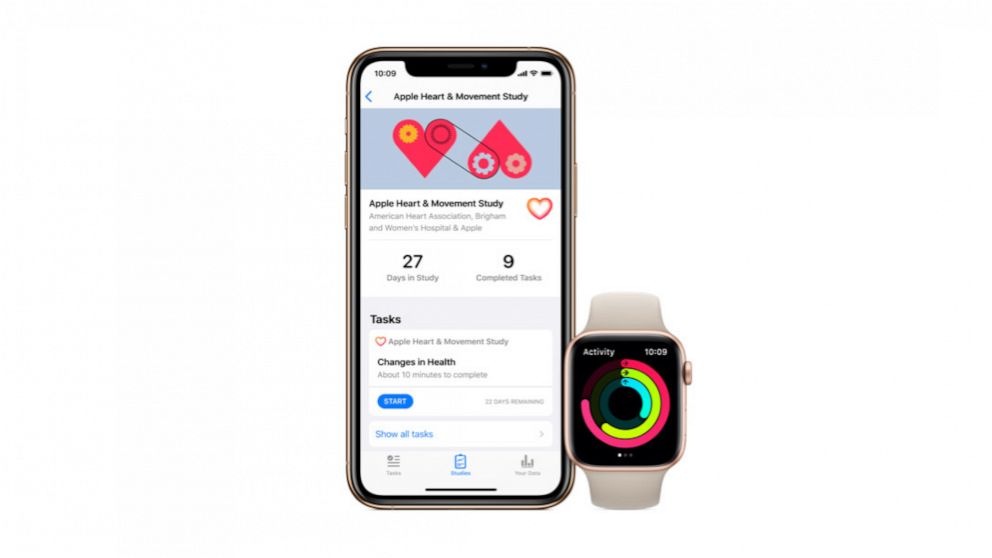 Apple
A new Apple app will allow people to take part in health studies like those based for your heart through the use of their Apple watches.

Anyone with an iPhone in the United States can join these studies by downloading the Research app and consenting to participate. To sign up for the heart and movement study, you also need to own an Apple Watch.

The process is more cumbersome than a typical click of the “I agree” that many of us have become used to. Apple says it wants people to know what they are signing up for, and the research institutions have specific language and agreement protocols to make sure the data is compatible with previous and future research.

Data collected through these studies will be used, not only to generate new knowledge on important health topics, but also to learn more about how people use their iPhones and Apple Watches.

“We want to make sure when we develop technology that we understand how individuals and customers use it, as well as how does the medical community use it,” Dr. Sumbul Desai, Apple's vice president of health, told ABC News. 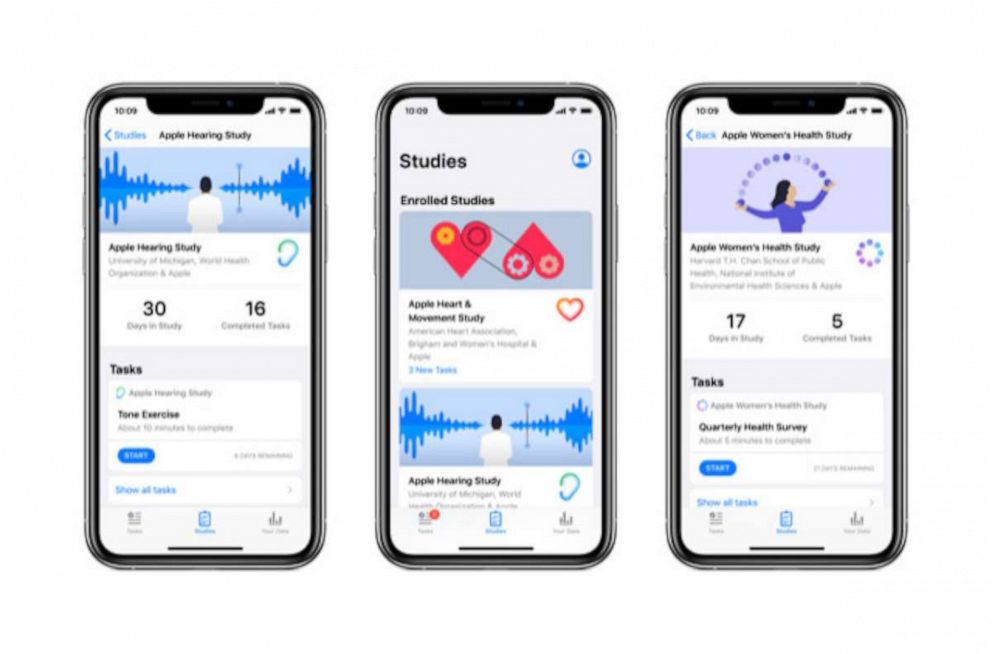 Apple
Apple has made participating in research studies a breeze with their new app for Apple Watches that allows people to participate remotely.

Apple’s launch of the Research app coincides with the publication of results from the Apple Heart Study conducted by Stanford Medicine, supported by Apple, and now published in the New England Journal of Medicine. The Apple Heart Study was the company’s first foray into using its wearable technology for the purpose of large-scale health research, and it hoped to prove that the watch could work to help people.

Among those who wore and returned the patch, 34% were found to have atrial fibrillation. The watch was found to be about 84% accurate at identifying irregular heartbeat.

It’s now a standard feature on the Apple Watch and many people have reported receiving the alert, going to the doctor for confirmation, and getting potentially lifesaving medical treatment.

Dr. Mintu Turakhia, a cardiologist at Stanford University and one of the lead authors on the Apple Heart Study, says: “We’re excited because this lays the foundation for more research in wearable technologies and generates a new way to do clinical research that engages more patients and people.”

As numerous large technology companies, including Amazon, Google and Microsoft move into the healthcare space, the advantages of using smart devices to conduct research are clear. Recruiting and enrolling participants through these devices may generate studies with massive sample sizes that are able to detect small differences between groups.

They may engage populations in clinical research that are traditionally left out of health studies, including women and minorities. It also afford the opportunity for monitoring of certain health indicators on a daily basis.

This can be a big advantage to patients and physicians alike. 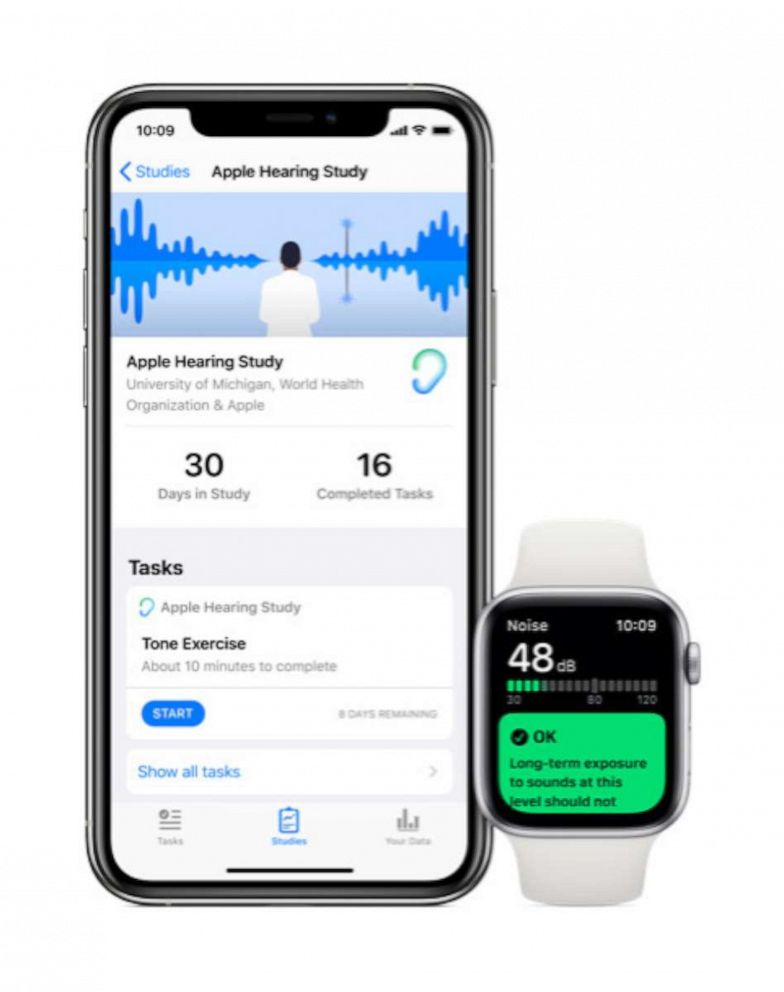 Apple
With Apple's new app for Apple Watches, people are able to sign up for studies and participate.

One of the studies available to enroll in starting Thursday is the Apple Women’s Health Study, which is being conducted in partnership with the Harvard T. H. Chan School of Public Health and the National Institute of Environmental Health Sciences. The purpose of this study is to examine women’s menstrual cycles and their relationship to several health conditions.

“The medical research for women has been an area that has been completely under-served. And it's only very recently that we have equal parity in research studies of women,” says Desai. “So we're really focused on areas -- that we can provide the information to users so they can be more proactive and engage earlier on with a physician.”

Bernstein, meanwhile, says Apple's approach will lead to a "greater variety of data."

However, there are limitations to this approach to data collection as well. People who own smartphones and smart watches may be wealthier, younger and healthier than the average American.

This was demonstrated to some extent in the Apple Heart Study, in which only 5.9% of the sample was over the age of 65. 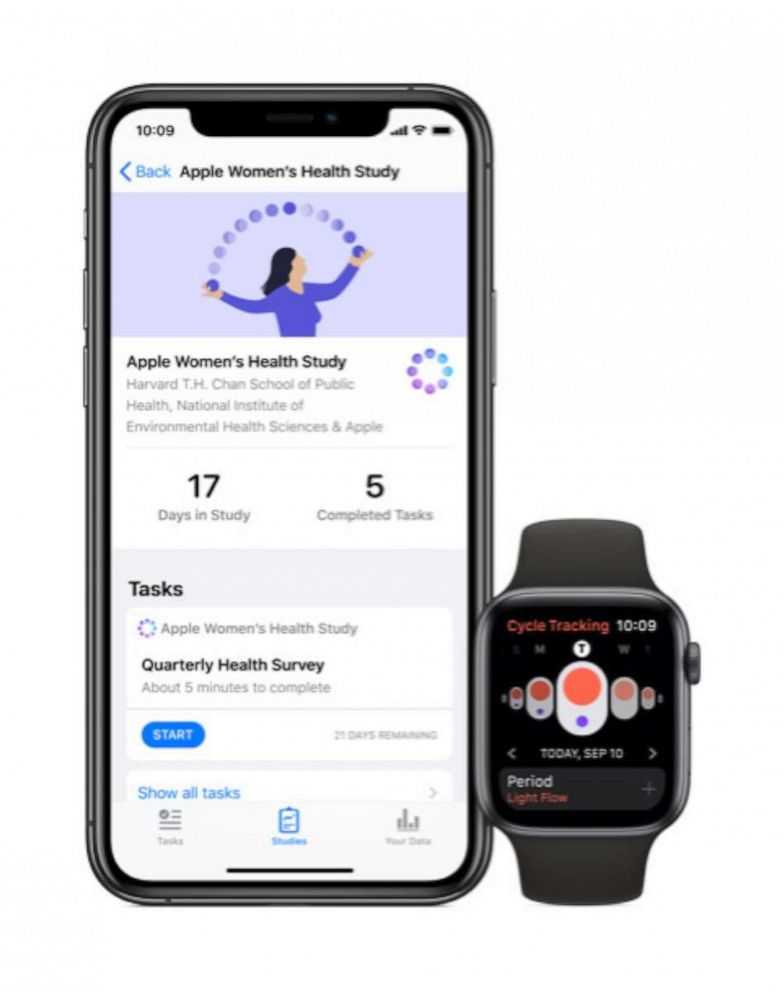 Sue Feldman, Ph.D., associate professor in the University of Alabama at Birmingham Department of Health Services Administration, isn’t involved with the Research app, but says she would like to sign up personally to participate.

“Yes, this is very innovative. However, being an Android user, there would need to be a serious cost offset to motivate me, and I do not have an iPhone," she said. "I am involved in another study that does not require an iPhone or any Apple platform for data transmission.”

Apple says customer privacy requires them to control the process on their devices.

"As one of its core values, Apple believes that privacy is a fundamental human right. Therefore privacy is built into all products and services from the beginning,” says COO Jeff Williams, who heads the medical initiatives at Apple. "The Research app was carefully created to only share data with the chosen studies when the user approves.

"It also includes a clear enrollment flow with detailed consent that explains how data will be used and allows a user to control the type of data shared with each study,” he added.

Users have control of what data they’re sharing and where it goes and can stop sharing at any time.

“When [you] opt in, one of the things you’ll see is we will never sell your data,” Williams told Ashton.

Apple isn’t talking about future plans besides these three new studies, but Feldman would like to see a study about whether people change their health behaviors when they see their data.

"If you know this is happening, do you change your lifestyle?" she asked.

For those of us checking our step counts or looking to close our rings, that may be an experiment we are already participating in.

For their latest venture into health research, Apple has partnered with both government and academic institutions to carry out the following studies:

The Apple Heart and Movement Study
Apple has partnered with Brigham and Women’s Hospital and the American Heart Association to understand how heart rate and movement impact hospitalizations, falls, and cardiovascular health.

The Apple Hearing Study
Apple is collaborating with the University of Michigan on a long-term study of how sound influences hearing over time. Data from both headphone usage and from the Noise app will be used to measure sound exposure and track its impact on hearing. These data will also be shared with the World Health Organization as part of its Make Listening Safe Initiative.

Jennifer DeCuir, MD-PhD is an internal medicine resident at Johns Hopkins Hospital and a member of the ABC News Medical Unit.