Barbara Higgins did a CrossFit workout on the day she was told she would need to be induced into labor, and then delivered her son Jack in about three hours.

And Higgins, of Concord, New Hampshire, did it all at the age of 57, likely breaking a state record as the oldest woman to give birth naturally, according to the Concord Monitor, which first reported her story.

"I'm mostly proud of my body," Higgins told "Good Morning America." "If I wasn't healthy enough and if my body wasn't youthful enough to grow a child, Jack wouldn't be here right now."

Higgins, a physical education teacher and former competitive runner, went through a long and emotional journey in order to give birth to her third child.

She and her husband, Kenny Banzhoff, 65, lost their youngest daughter, Molly, to an undiagnosed brain tumor in 2016 at the age of 13.

Shortly after Molly's death, Higgins -- whose older daughter, Gracie, is now 20 -- said she began having dreams of having a third child.

"The connection between Molly's death and Jack's arrival are definitely there, but it was never this obvious, well, Molly has died so I need to have a baby," said Higgins. "It was just this dream that I started having." 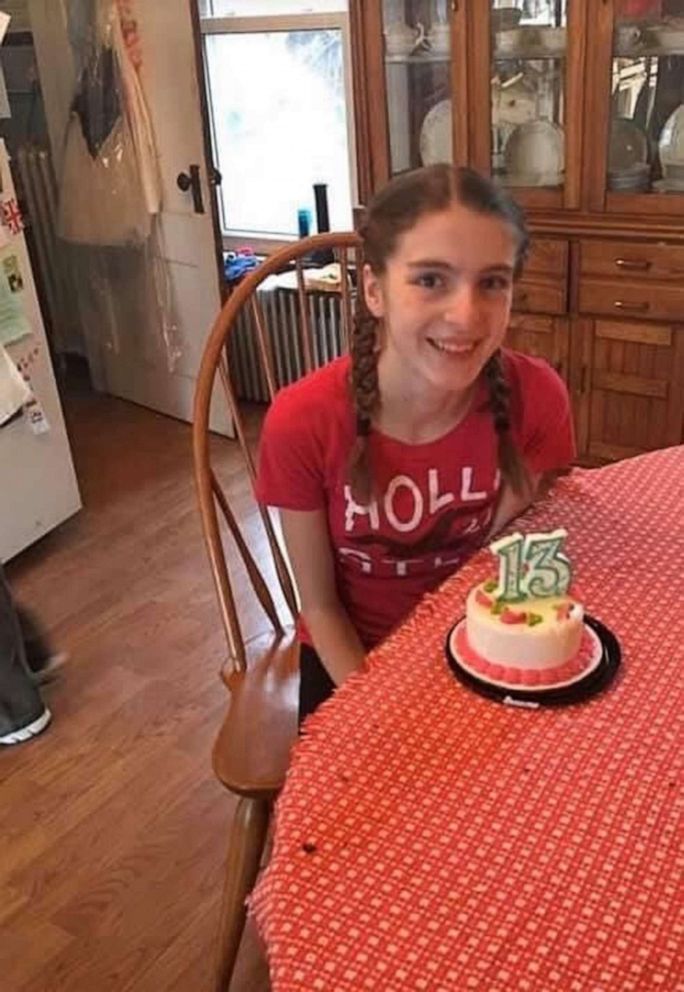 Higgins was 53 at the time of Molly's death, already past what is typically considered to be a woman's prime childbearing years.

She continued to have the dreams of having a third child, but didn't follow through with it until several years later, in 2018.

"I thought, 'Well, I'm going to do what it tells me,'" Higgins said. "I'm going to go the doctor and have bloodwork and see where this will or won't take me."

Higgins, who said her husband was fully supportive of trying for another child, began undergoing a litany of tests -- both mental and physical -- to see if she could sustain a pregnancy and give birth in her 50s.

"It was not a quick process and that was also reassuring to us," she said. "Everything that went well made us think, okay, this is a decision that could work."

A former track star at Boston University and current CrossFit athlete, Higgins saw her years of living a healthy lifestyle pay off during the testing process.

“She exercises like someone who is in her 30s, in my opinion,” said Higgins' OBGYN, Dr. Ashish Chaudhari, of Dartmouth-Hitchcock Concord. "Patients who were exercising before pregnancy can continue to do safely in pregnancy and that can result in a more healthy pregnancy with favorable outcomes for mother and baby.”

Through the rigorous testing required by her doctors, Higgins ran into one obstacle that ultimately saved her life. An MRI led doctors to discover that Higgins had three brain tumors, which she was able to have successfully removed.

"I never would have found those tumors if I wasn't trying to have a child, so I look at Jack sometimes as my little lifesaver," she said.

How Higgins sustained a pregnancy and successful birth at 57

When Higgins became pregnant with Jack last year at age 56, she was more than two decades past the age -- 35 -- that medics consider women to be of "advanced maternal age."

She found help in her journey from Dr. Vito Cardone, a reproductive endocrinology and infertility specialist in Stoneham, Massachusetts.

"Unfortunately a lot of centers have age limits on who they will help for fertility," said Cardone. "In my opinion, you need to look at each individual as an individual."

"You can see that she is the type of woman that trains and is in a great shape, much better than many people I work with who are 25 or 30 years old," Cardone said of Higgins. "And she knows what she's getting into and [knows] that she really desires a child."

But Cardone also acknowledged the uniqueness of Higgins' situation, adding, "It's not everybody at age 57 who I will accept for treatment."

"It's a tender piece," Higgins said. "We researched all the different ways and chose the way that worked best for us. That's going to stay between Kenny and myself."

"At my age, I find that the more I share the more people criticize and I wouldn't want my experience to scare someone else from taking steps to having a baby in their 50s," she added.

"We need to change our views on what age is okay to get pregnant, that's how I look at it," said Cardone. "When I started 40 years ago, I wasn't helping a lot of women that were over the age of 45 and then with time, with improvements, we've gotten to a more advanced age."

Cardone said he looks not only at a woman's physical and mental health, but also at what the current life expectancy is for women in the United States.

"I want the child to be with the parent of at least 20 or 30 years," he said. "The life expectancy charts are saying now that 80 or 85 is the age of a woman's life expectancy."

Higgins said that while women in her family have lived well into their 90s, she focused on on another factor when deciding whether to have a child in her 50s.

Higgins said she also considered how much more wisdom and free time she and her husband, who is retired, have now versus when they were raising their daughters in their late 30s and 40s.

"When Molly died, Kenny couldn’t believe the number of things he had missed because they would come up in memories or pictures and he’d say, ‘Well, where was I?,’ and I’d say, ‘You were working,'" Higgins recalled. "Because in a typical life, you get married, buy a house, start a job and have a kid all in like a five-year period." 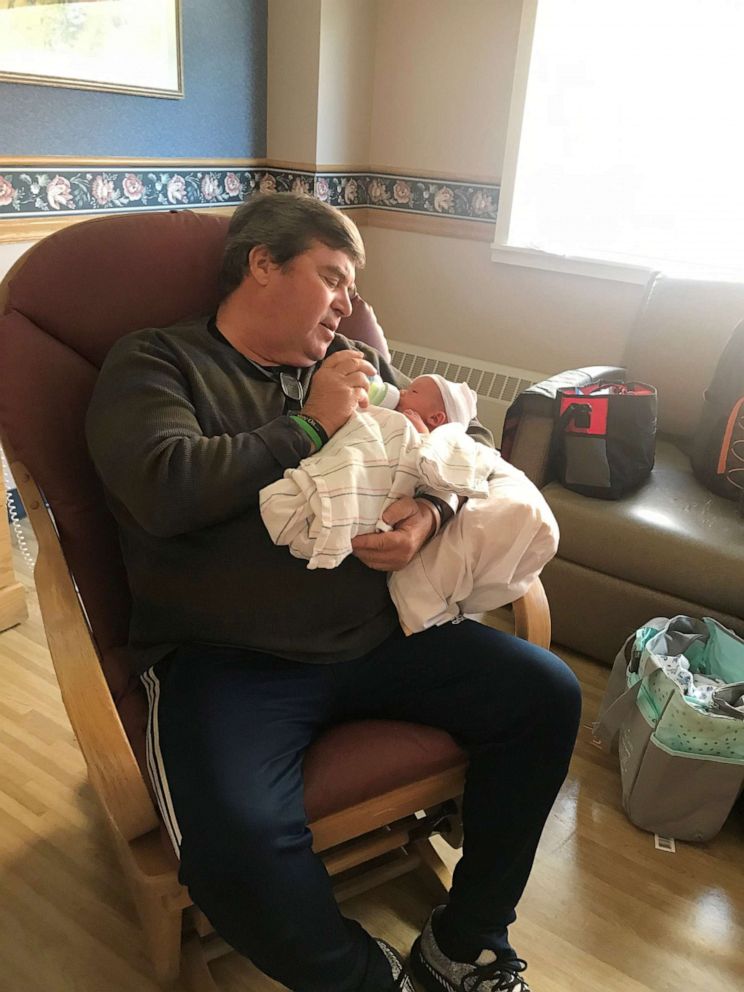 That same mentality of appreciating every moment helped Higgins throughout her pregnancy too.

"When you're in your 30s, everything is a disruption," Higgins said. "This time around, it was memorable as opposed to uncomfortable or painful. I didn't once mind the changes in my body."

Higgins' body, due to her healthy diet and exercise, was conditioned well enough to endure the stress of a pregnancy, according to Cardone.

"Pregnancy is a stress on the body and it's not just the uterus and the placenta and the baby," he said. "The heart, the kidney, the lungs, all of these have to work harder in order to be able to sustain and grow and delivery the pregnancy."

Higgins also underwent more frequent than usual ultrasounds and testing throughout her pregnancy, according to her OBGYN, Dr. Chaudhari.

"She was coming in twice a week to have heart rate testing on the baby," he said. "She passed all those tests wonderfully."

Higgins gave birth to Jack on March 20, 36 weeks and five days into her pregnancy. Jack was born quickly and at a healthy 5 pounds, 13 ounces, according to Higgins.

"I had a cup of coffee, had a baby and had lunch," she said. "It was my quickest labor ever." 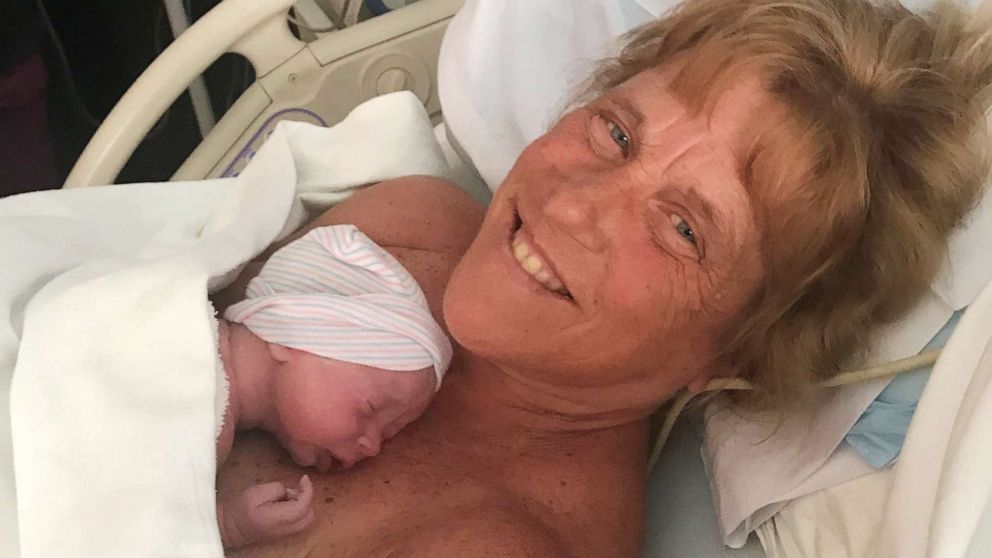 Jack and Higgins are both home now, and Higgins said she and Banzhoff are adjusting well to life as new parents in their 50s and 60s, respectively.

"We've decided it should be party in your 20s, marry in your 30s , career in your 40s and then retire and have babies in your 50s," said Higgins. "I’ll live my life as fully as I have been and I have this little buddy now."

Higgins, who will turn 58 in July and is still working as a physical education teacher, said she cannot wait to watch all that Jack does in his life.

"His life will bring him there. I'll be there to watch it for as long as I can," Higgins said.