A group of 80 women physicians are joining forces to put a spotlight on Black physicians and health care for Black women.

The campaign is modeled after #ShareTheMicNow, which saw celebrities give their social media platforms to Black women for a day amid the racial reckoning that happened in the country after the death of George Floyd in May.

Hearing how the movement started, was inspired and is planning to go. Also mentions of @drreneeparo

"Many times I don’t think people see a lot of Black faces from a physician standpoint, so a campaign where you’re seeing them all at once is really helpful for community," said Dr. Jessica Shepherd, a Dallas-based OBGYN who is taking over the social media platforms of Dr. Jennifer Lincoln, a Portland-based OBGYN. "When we think of racial disparities in health, a lot of that has to do with, one, representation but, two, for [Black women doctors] who do represent their community, if their voices aren’t heard then change can’t be made."

In the United States, only 5% of all physicians are Black and only 2% are Black women, noted Lincoln, who said she hopes the campaign puts a spotlight on the "ridiculous disparity" when it comes to representation.

Black women in the U.S. have a projected life expectancy that is nearly two years shorter than that of non-Hispanic white women, according to data shared by the U.S. Department of Health and Human Services Office of Minority Health.

Black women, as well as American Indian and Alaska Native women, are also two to three times more likely to die from pregnancy-related causes than white women, according to data released last year by the Centers for Disease Control and Prevention.

Here are four more things Shepherd and Lincoln want people to know about Black women's health and representation in medicine as they #SharetheMedicalMic. 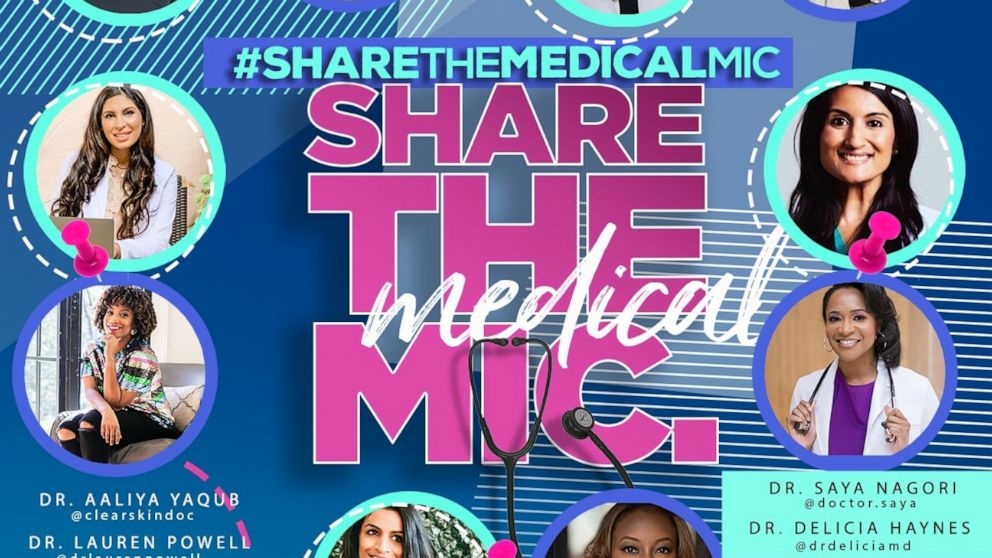 "That’s real and until we address that we’re not going to get anywhere with the Black maternal mortality issue in this country," she said. "Until women are treated better and doctors understand this and address their implicit bias and understand that when it comes to Black women and pregnancy, we need to do a lot better."

She also said Black women are more likely than other women to have uterine fibroids, and when they do they are more likely to suffer from symptoms longer and to be offered a hysterectomy as treatment.

"You can draw down into the levels of insurance coverage, access to health care and also socioeconomic status and what resources are provided to them," Shepherd said of the outcomes of health conditions for Black women. "In each of those pillars you can see the difference and the paucity of what Black women are given as options, given as resources, given availability to or their coverage that creates a lot of those barriers."

It’s officially here! I am so excited to be a part of this campaign . . . . . Come join the 40 black female physicians that are taking over the accounts of non black physicians to AMPLIFY our voices! . . . . . We want to hear your questions, conversation topics and most of all how we can make change in health care when it comes to inequities. #sharethemedicalmic #health #healthdisparities #racism #drjenniferlincoln #dallasgynecologist #jessicashepherdmd @jessicashepherdmd @dr.staci.t @drreneeparo @drlaurenpowell @drkameelahsays @tjonesivfmd

3. Black women 'need to be heard' when it comes to mental health: "I think there are many women who have had experiences with depression and anxiety and what we have seen is their complaints are not taken as seriously," said Shepherd. "Black women need to be heard."

"There needs to be a community effort in order to minimize the stigma that comes with mental health and then also creating a place where you can have vulnerability in seeking mental health treatment," she said.

4. Black women deserve an overhaul of health care: "There needs to be from the top down a complete overhaul of how there is equity in access to treatments and resources," said Shepherd. "I think the organizations and healthcare systems need to be aware of the disparity and how to cross those barriers. I think there needs to be a call to action in healthcare and how we can do a better job at creating a decrease in that gap that we see."

5. Representation matters: "We can only expect kids to become what they see, so if they’re not seeing Black female physicians out there and in the norm and part of their every day narratives and what they see when they go to the hospitals, then how are they going to think that they can achieve that?," said Lincoln. "That’s another big goal of this [campaign], to get these voices out there so people can continue to follow them and amplify them."

"My hope is maybe there is a girl who is following my feed and now she’s following Dr. Shepherd’s feed," she said.

Editor's note: This story has been updated to reflect that the women physicians who handed over their social media platforms to Black women physicians came from all backgrounds, not just white women.