One version of amoxicillin, a common antibiotic used to treat issues like ear infections in kids, is in short supply, according to the Food and Drug Administration.

The shortage of amoxicillin means that parents and other caregivers may need to visit multiple pharmacies in order to fill a prescription for liquid amoxicillin or may need to ask their doctor for an alternative medication. Some pharmacies may also be able to adjust the strength of the supply on hand to meet demand.

The FDA lists the oral solution of amoxicillin in its drug shortage database, describing it as "currently in shortage."

The American Society of Health-System Pharmacists also lists amoxicillin in its drug shortages database, noting that multiple different manufacturers of the drug are experiencing shortages.

Amoxicillin is an antibiotic that can be prescribed for bacterial infections.

In addition to ear infections, amoxicillin is commonly prescribed to children for strep, whooping cough and some urinary tract infections.

Editor's Picks
MORE: Why are pediatric hospitals filling to capacity?

One manufacturer of the drug, Sandoz, a division of Novartis Pharmaceuticals, told ABC News that what it described as a "supply situation" is the result of a "significant uptake" in demand for amoxicillin.

The increased demand combined with several other factors, including supply chain issues, is leading to the short supply, according to the company.

"The combination in rapid succession of the pandemic impact and consequent demand swings, manufacturing capacity constraints, scarcity of raw materials, and the current energy crisis means we currently face a uniquely difficult situation," Sandoz said in a statement. "We are working with key stakeholders including governments to find ways to manage this critical situation." 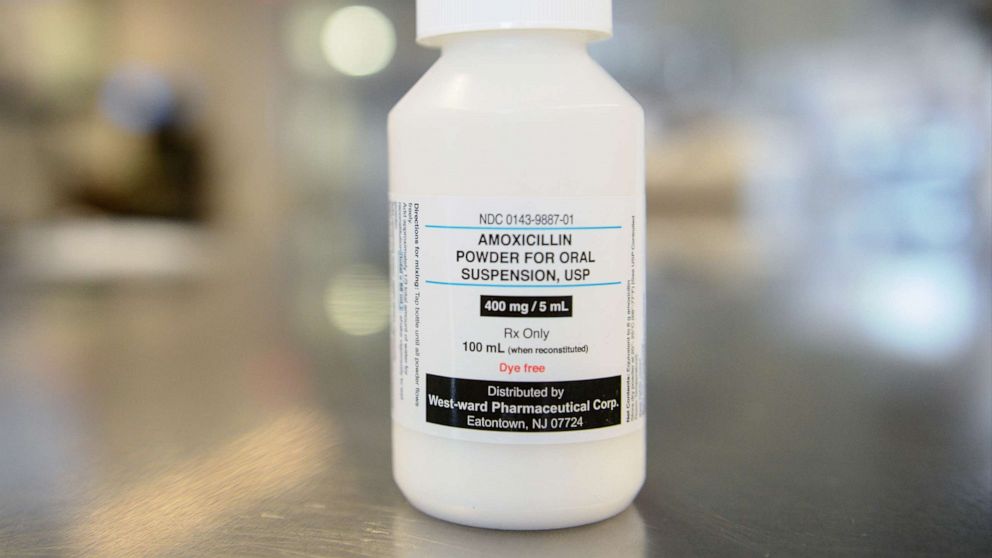 Reading Eagle Vi/MediaNews Group via Getty Images, FILE
In this May 27, 2015 an Antibiotic resistance a suspension of the common antibiotic Amoxicillin Trihydrate is seen in the pharmacy at the Reading Hospital.

Amoxicillin is not used to treat COVID-19, RSV or the flu, but the drug's limited supply comes at a time when many pediatric hospitals across the country say they are reaching capacity due to an early rise in respiratory illnesses.

Last week, pediatric bed occupancy in the U.S. was the highest it's been in two years with 75% of the estimated 40,000 beds filled with patients, according to an ABC News analysis.

Walgreens told ABC News on Friday the pharmacy chain is "not seeing any constraints around availability of amoxicillin at this time."

CVS told ABC News it has seen "isolated" shortages of the drug.

"We've seen isolated supplier product shortages of certain doses of the medication," the company said in a statement. "We're working with manufacturers to replenish supply as quickly as possible."