By Elisa Tang
Video by Elisa Tang, Nidhi Singh
Share —
Sign up for our newsletters to get GMA delivered to your inbox every morning!

Roderick Sewell had almost reached mile 26 of the grueling Ironman triathlon in Kona, Hawaii, when he felt himself starting to slow down.

That was until he heard the cheering from the crowd growing -- and when he realized that this moment was bigger than him.

It was the first time a bilateral above-knee amputee would complete the Ironman World Championship on prosthetic legs.

“I feel like the pressure of what this meant was enough to make me keep going,” Sewell told “GMA.”

His stomach was in knots as he raced through the last leg of the triathlon.

“If this was just about me, I know I might not have finished, but I know there’s kids out there that are watching, and their parents are wondering if their kid is going to be OK,” he said. 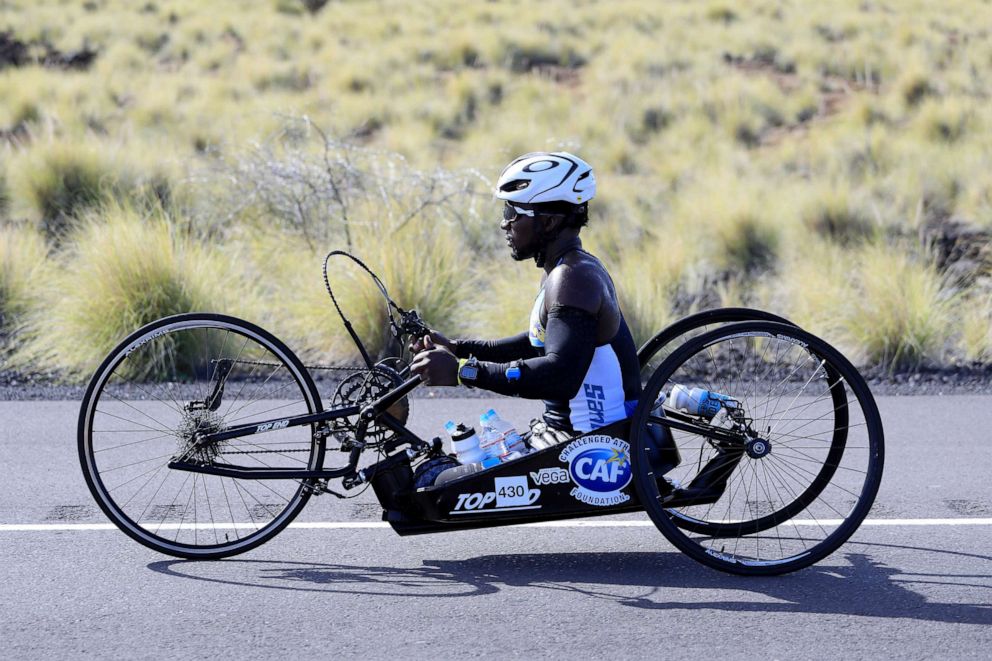 Tom Pennington/Getty Images for IRONMAN
Roderick Sewell competed in the IRONMAN World Championship, which consisted of a 2.4-mile open water swim, a 112-mile bicycle ride, and a marathon 26.22-mile run on Oct, 12, 2019, in Kailua Kona.

It was the first time the San Diego native ever competed in an Ironman.

As he crossed the finish line, his smile spread from ear to ear. Tears filled his eyes as he embraced his mother, Marian Jackson.

They had both come such a long way.

Growing up as an amputee

Sewell was born missing tibias in both of his legs, which prevented him from walking.

“It was either amputation or live life in a wheelchair. There was no stability,” Sewell shared.

“My mother, a single mother, decided to have my legs amputated, and she was terrified because she had never seen an amputee living a normal life,” he said. “She didn’t really see amputees, period.”

MORE: This video of a boy without arms landing a box jump will give you chills

Jackson, like any other mother, fed her son and changed his diapers, but she couldn’t understand why her son cried. As he grew older, he experienced "phantom pain" where his legs had once been.

His mother decided that he needed prosthetic legs to help him live a better life.

A mother’s sacrifice to help her son 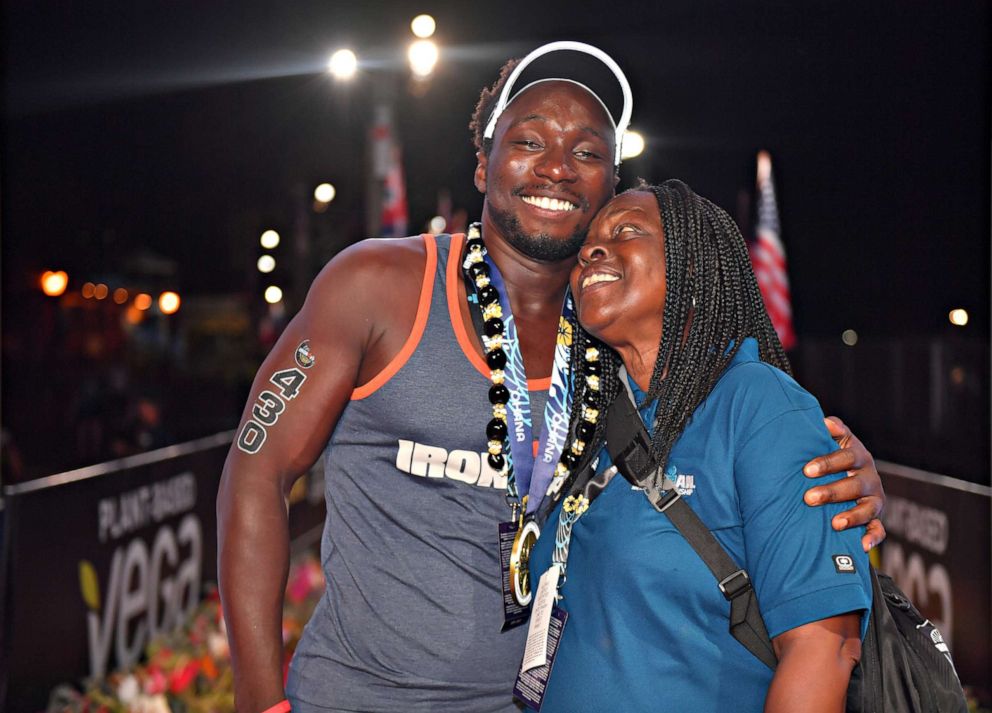 Donald Miralle/Getty Images for IRONMAN
Roderick Sewell with his mother, Marian Jackson, after completing the 2019 IRONMAN World Championship on Oct. 12, 2019, in Kailua Kona, Hawaii. Sewell competed in the the hampionship, which consisted of a 2.4-mile open water swim, a 112-mile bicycle ride, and a marathon 26.22-mile run.

In order for her to afford the proper equipment for her son, she filed for unemployment after working for the Navy. She believed that the only way for her son to get full coverage for his legs was if she did not have an income.

His mother’s sacrifice helped him get his legs, but at 8 years old, the pair was homeless and had to move from shelter to shelter.

“I can only imagine what it was like for a parent to go through that with their child, who already has a situation that needs to be in a secure home,” Sewell said.

Despite criticism from family members about how she made "the wrong choice," Sewell said “it was the sacrifice she made and it worked.”

He said he and his mom were like "Bonnie and Clyde" and she constantly encouraged him to focus on going to school and staying active in sports.

(MORE: This 11-year-old amputee running the runDisney Star Wars Rival Run 5K is the inspiration we all need)

“She says I was the best thing that happened to her, because in that time, when we were going through [homelessness], we met Challenged Athletes Foundation (CAF),” Sewell said.

CAF is an organization that raises funds for individuals around the world who have disabilities to compete in sports and live a healthy lifestyle.

The organization has raised money to get their athletes wheelchairs, adaptive bikes, prosthetic legs, blades and more.

CAF was able to help Sewell when he was 8 so he could participate in sports with others just like him.

“For [my mom] to be exposed to that world, and have something to give her hope and make her happy, and then see her son being active, smiling, she was good,” he said.

A love for sports

Sewell became hooked on everything CAF had to offer -- he did everything from handcycling to wheelchair basketball.

He even found a love for swimming, all thanks to Rudy Garcia-Tolson, the now Paralympic swimmer, who became Sewell's life-long friend and mentor.

“[Seeing him swim] and him being a double above-the-knee amputee, I knew there was no reason why I can’t do it,” Sewell, who has now been swimming for 12 years, said.

"Right away we had an instant connection," Garcia-Tolson told "GMA." "Like we both knew you know the daily struggles that we have."

The pair has always held each other accountable.

"We never let our 'disability' become who we are," Garcia-Tolson said.

Every day, Sewell would go from the shelter to school and then practice.

Being involved in sports changed his life because he learned how he could “push past his limits.”

The journey towards Ironman

The Ironman World Championship is a high-endurance triathlon that has been held in Kona since 1978.

The mission of all those involved in Ironman is to give back on both a local and global scale.

Sewell heard about the triathlon through his fellow athletes involved in CAF, but he never considered doing it until Ironman asked him to participate in the Ironman World Championship in October 2019. 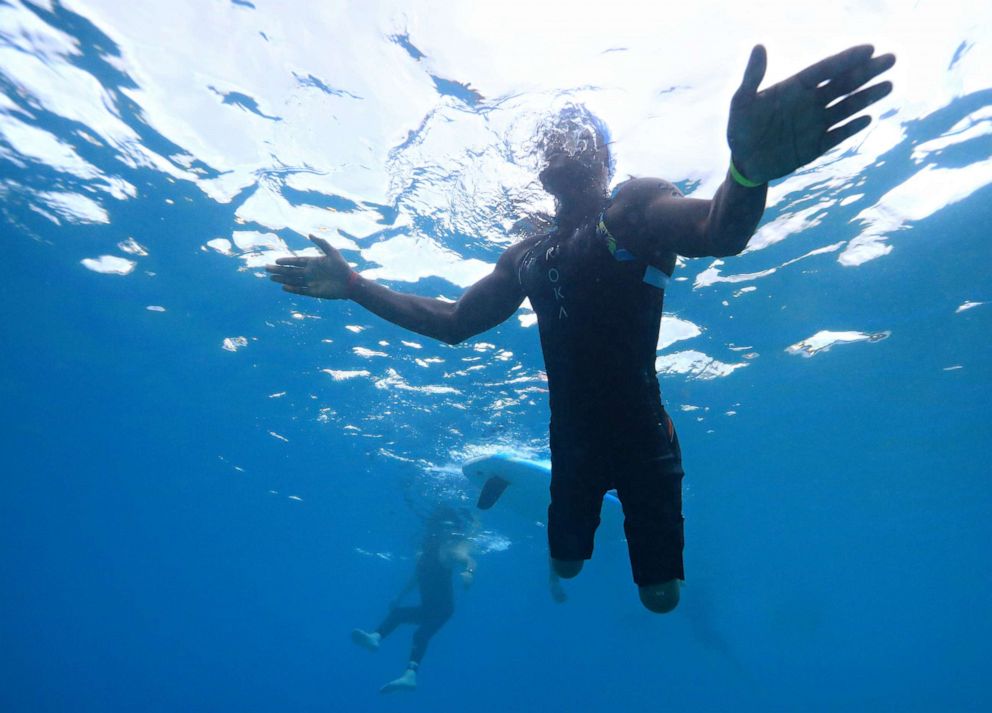 “I didn’t want to say no because I knew what it meant to CAF and our community. This is a big deal,” he said.

He knew the obstacles that he would face, including the heat and the wind, but he devoted himself to months of practice in the pool and on the bike.

“I couldn’t eat my food, my stomach was completely torn up,” Sewell said. “I’m kind of feeling the ground up to me, but I know I just gotta keep going forward.”

He finished at 16 hours, 26 minutes and 59 seconds, and was greeted by applause and joyful tears as he collapsed into his mother’s arms.

“This was a dream, for sure,” he said. “I've had people come up to me with legs, and they're like, 'You did a marathon? I don't even run a marathon!'”

His victory meant so much more than just winning a medal -- it meant showing others what is possible.

Now, his sights are set on preparing for the trials for the Paralympics in Tokyo later this year.

“Just because you have a disability, you don’t have to live your life disabled,” he said. “If [Ironman] didn’t teach me anything else, it’s that I literally can do anything I want.”