As the United States enters a third year of the coronavirus pandemic, kids' mental health continues to be a growing issue.

Kids' health, school and after-school activities continue to be disrupted by the pandemic, while over 200,000 children under 18 in the U.S. have lost a parent or adult caregiver to COVID-19.

A report released late last year from the U.S. surgeon general warned of a growing mental health crisis among young people amid the coronavirus pandemic, while the American Academy of Pediatrics, American Academy of Child and Adolescent Psychiatry and the Children's Hospital Association -- which collectively represent over 77,000 physicians and over 200 children's hospitals -- declared children's mental health challenges a "national emergency."

With those statistics in mind, and as a mom of four herself, Alysha Tagert, a licensed clinical social worker in Washington, D.C., is sharing with parents a tangible way to help their kids.

Tagert, whose kids range in age from 3 to 8, said she noticed anxiety popping up among not only families she works with, but also in her own kids, particularly her 8-year-old son, as they navigated returning to in-person activities. 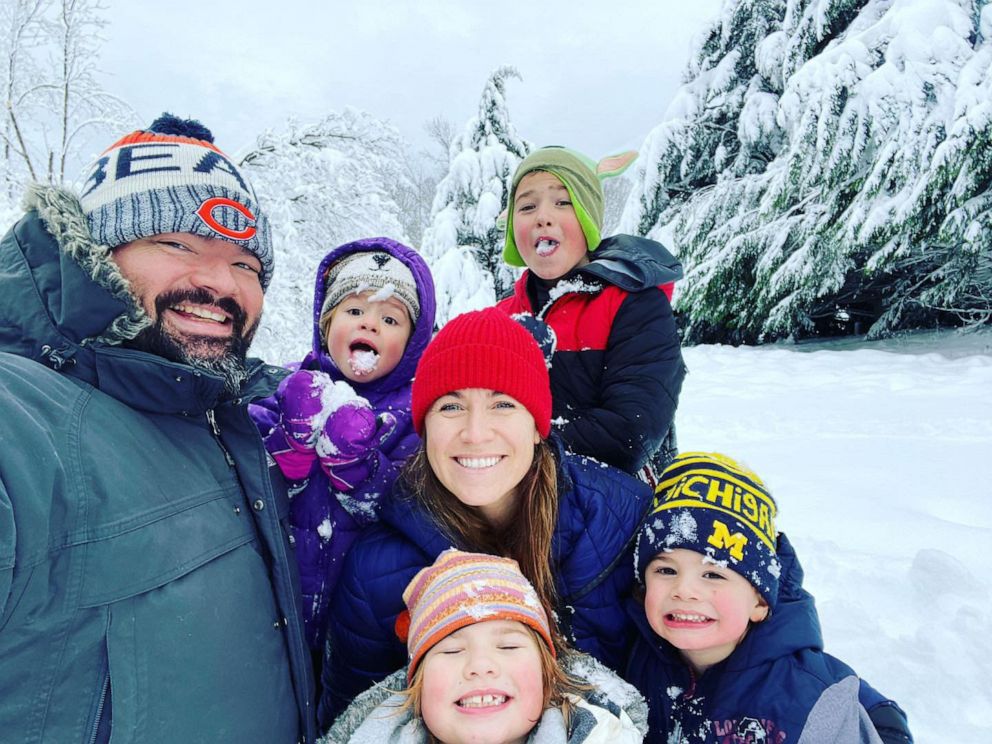 "There was so much transition," Tagert said, describing the struggle with being away from friends and then back in school and having to follow different mask requirements in different places. "He just kept saying, 'My stomach really hurts,' over and over again."

Recognizing her son's physical symptom as a sign of anxiety, Tagert said she worked with him to create a coping tool box he could take with him to places such as school and baseball practice.

"It's a tangible thing that you can hold on to that has simple, everyday stuff that helps engage all five of your senses for the purposes of calming down and being present for the moment," Tagert said of the coping tool box. "My son’s was an old tin lunch box that has a dinosaur on the front of it." 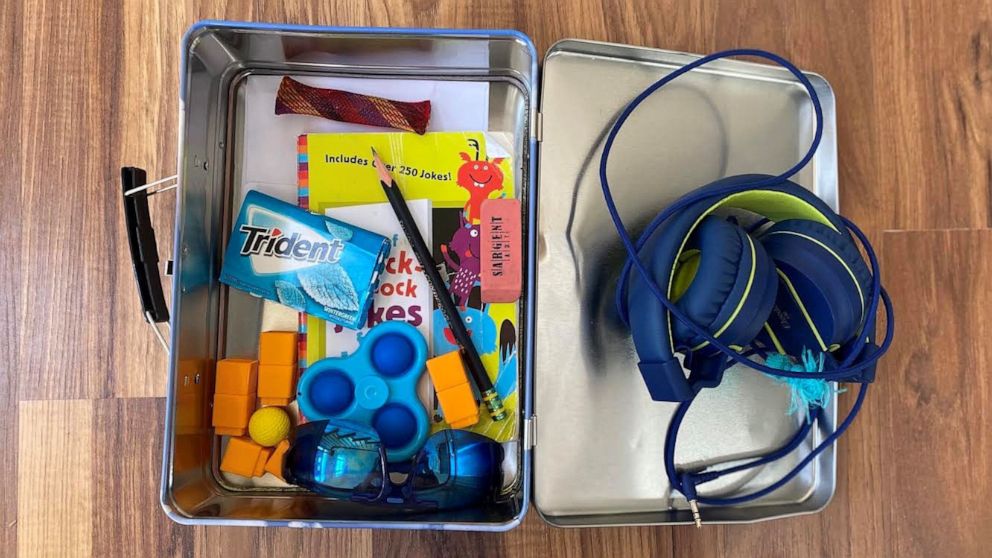 Tagert's son put items like headphones, a joke book, a family photo, chewing gum and a fidget spinner in his tool box.

"I asked him, 'What are the things that really help you feel like you can calm down?'" Tagert said. "And those are his go-to ones."

Tips to create a coping tool box with kids

Tagert said it's critical to include your child in the making of the tool box and to do so at a time when they are removed from an anxiety-provoking situation.

"It's the same thing as if you were going to engage in a conversation with someone, you don't want to do it when they're really, really activated," Tagert said. "So do it in a moment when they're not feeling highly anxious."

MORE: Tips for boosting your child's mental health during COVID-19

Tagert recommends using this as a teaching moment to explain to kids that not all anxiety is bad -- that it can even be helpful in emergency situations -- but it's important they know how to identify and manage their emotions.

"It's important for kids to understand, 'I'm starting to feel this is what anxiety feels like, or this is what worry is, I'm going to name this, and now I have tools to address that,'" Tagert said, citing symptoms that can include sweating, increased heart rate and stomach pains.

Parents, she said, can start a conversation by naming and normalizing what their kids are feeling and figuring out ways they can help themselves.

When her son showed signs of anxiety, Tagert said she asked him what his stomachaches felt like and then gave examples from her own life.

"Normalize that and say, 'You know what, here are some things that I've done before that helped me when I get that same pit in my stomach, or make me feel worried. Do you have any ideas of what helps you when you get worried about some things,'" she said. "And then just start engaging."

According to Tagert, the second most important thing for making a child's coping tool box is to include items that touch all five senses -- touch, sight, hearing, smell and taste.

In her son's case, he told Tagert that one thing that made him excited about baseball was being able to chew gum, so that went in the tool box. They also listen to his favorite songs on the drive to baseball practice. 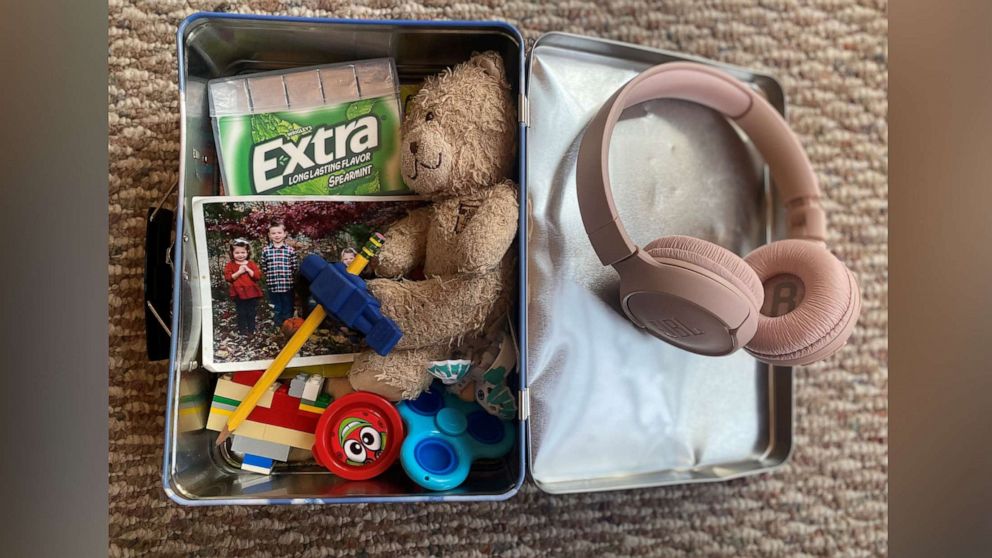 Here are more examples from Tagert of items to include in a coping tool box.

Something that provides the body's awareness of itself and its limbs, such as a weighted cushion, vest or stuffed animal;

An item to squeeze and keep their hands occupied such as a stress ball or fidget spinner;

Items to support breathing and relaxation such as a bottle of bubbles or a pinwheel;

Olfactory sensory support, aka something that smells good, such as a calming essential oil spray;

Something that requires movement such as a book of yoga poses or a jump rope;

A favorite playlist of music and noise-canceling headphones;

An item for oral motor sensory support such as sugar-free chewing gum;

Something that requires thought or concentration such as a puzzle or reading book;

And something visually soothing such as an hourglass or even an eye mask to block everything out so they can concentrate on their calming efforts.

Tagert added that it's also important for parents to recognize that they, too, are going through a difficult and exhausting time through the pandemic, and to look out for themselves.

"The thing that is really important about us as parents is that we need to be doing these things, too, to help us in our moments of anxiety," she said. "As a parent, you are the most influential person in your child's life, hands down, and our job as parents is to teach our children how to live in this world. That doesn't mean that we do it perfectly. They watch us work through things. They've watched us work through the pandemic, too."