A mom of three in Missouri is tackling cancer head-on, literally, doing headstands, handstands and push-ups during her chemotherapy treatments.

Lisa Fosnough, 43, of Parkville, Missouri, is a five-time marathoner who works out five days a week with runs and CrossFit.

When she noticed late last year that the muscle on her right leg was raised and getting higher, she went to multiple doctors who told her it was likely just a deep bruise from her intense workouts.

Fosnough persisted and eventually had an ultrasound done on her leg. That required an MRI and a biopsy came back positive for cancer.

In June Fosnough was diagnosed with dedifferentiated parosteal osteosarcoma, a rare and aggressive type of bone cancer affecting her right femur.

"The diagnosis for me was devastating," said Fosnough, whose kids are ages 16, 14 and 11. "I was laying on my bedroom floor because I felt so nauseous because getting this news was so horrible." 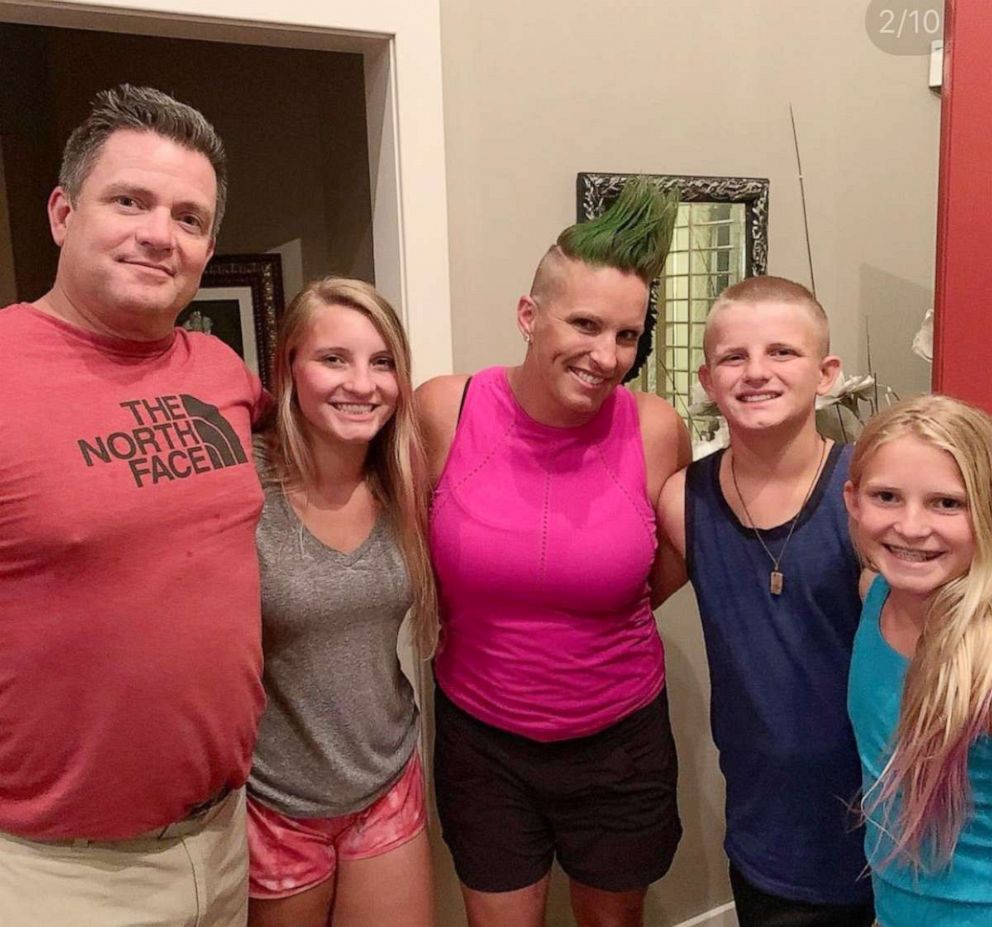 Courtesy Lisa Fosnough
Lisa Fosnough, of Missouri, poses with her husband and their three children.

Fosnough is now halfway through the six rounds of chemotherapy she will need to complete before undergoing a complex surgery in November. The surgery will include doctors taking some of Fosnough's own leg bone and combining it with cadaver bone to re-form her femur, according to her doctor, Dr. Ben Powers, a sarcoma oncologist at the University of Kansas Cancer Center.

"There’s two main ways that we see people react when giving a diagnosis like this. One is to attack it full force and the other is to kind of withdraw from their normal life," said Powers. "She has attacked this full force, head on, not letting it affect what she wants to do in a given day or given week."

(MORE: She was given minutes to live. 10 years later, she danced to the Britney Spears song that gave her life after brain surgery.)
Editor's Picks

For Fosnough, that has included incorporating her beloved CrossFit workouts into her chemotherapy sessions. Fosnough has been known to do push-ups on the ground and push-ups while upside down on her head as she's being treated at the University of Kansas Cancer Center.

"I’ve never had a patient ask if wanted to do handstands with her as she’s preparing for chemo. That’s a first," said Powers. "I told her I’d need to learn how to do a handstand first." 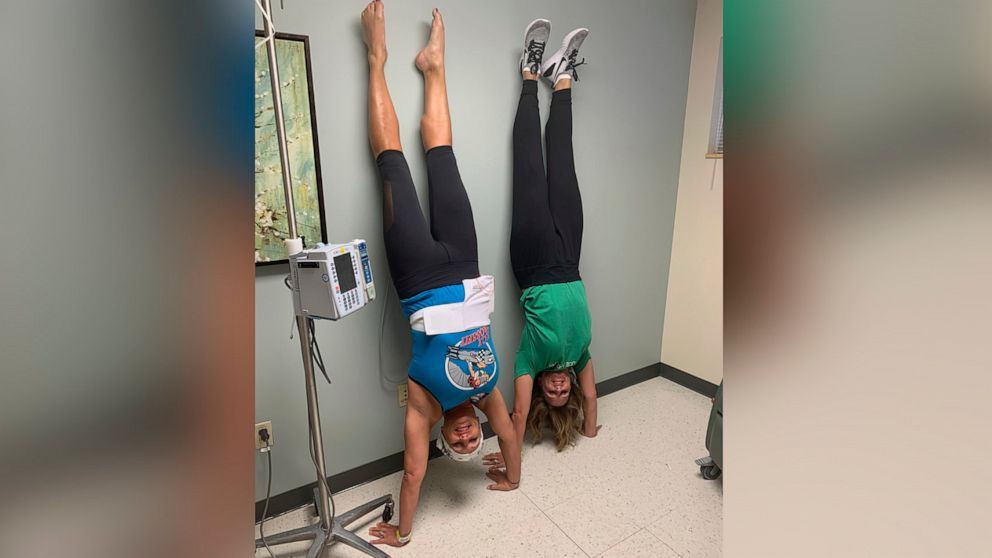 Courtesy Lisa Fosnough
Lisa Fosnough, left, does a handstand with a friend during her chemotherapy treatment.

Fosnough said maintaining her active lifestyle as best she can during chemo makes her feel in control and empowered. She also hopes it's delivering a positive message to her three kids.

"I'm going through one of the hardest things in my life but I’m still physically and mentally able to wrap my head around other things," she said. "Cancer is not going to stop me from doing what I can do."

Fosnough recalled that she had an "aha moment" after the shock of her diagnosis.

"I didn’t do anything to deserve this is but it is my reality and I need to be positive to have the best outcome I can," she said.

In addition to working out during chemo treatments, Fosnough is also going for walks when she feels up to it -- her doctors have told her not to run -- and going to her local CrossFit gym, where trainers give her modifications to do. 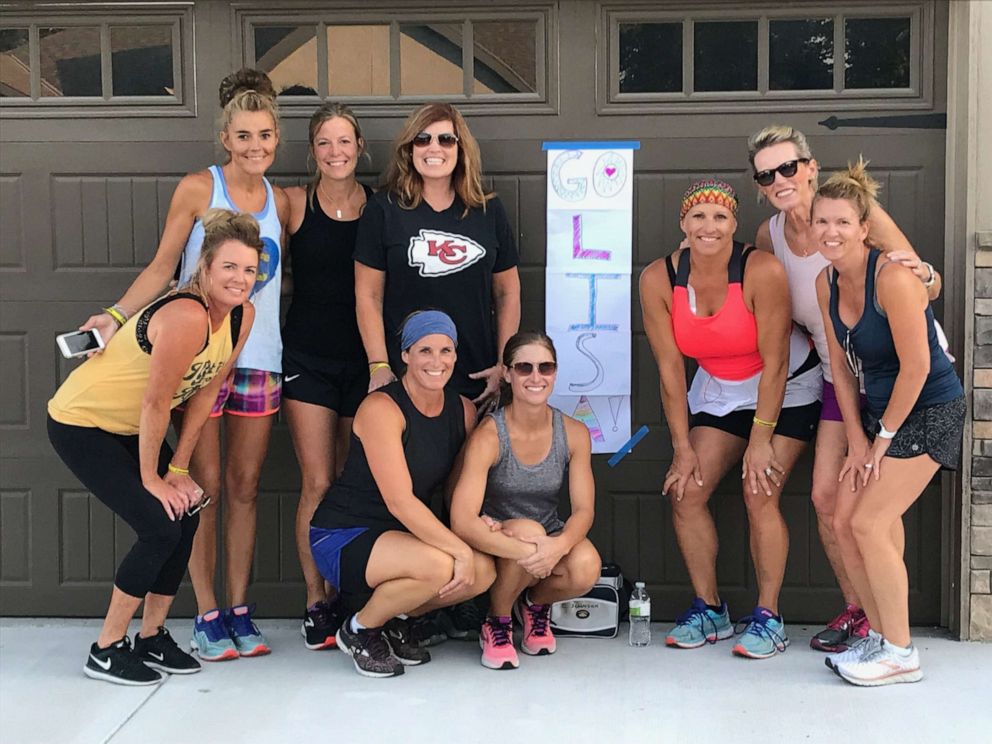 Courtesy Lisa Fosnough
Lisa Fosnough, in pink, is supported by friends during her cancer battle.

"When I told my trainer about my surgery and what was going to be required to recover, he didn’t say, ‘Oh Lisa,'" Fosnough said. "He just looked at me and said, ‘OK, I’m going to get to work. We may have to buy some new equipment ... You’re our family and we’re going to take care of you."

Fosnough has set her sights on her next physical challenge, walking in the Race to Cure Sarcoma in Kansas City next month. She has already assembled a team to race with her and raise money for the Sarcoma Foundation of America, a nonprofit that helps fund sarcoma awareness and research.