A mom of three who was diagnosed with COVID-19 two months after giving birth has been welcomed home by her family after spending four months in the hospital, much of that time sedated and in the intensive care unit.

Reyna Lopez, of Tempe, Arizona, returned to her two older children, ages 4 and 2, and her husband, Rodolfo Lopez, at the end of October, more than 100 days after she was diagnosed with COVID-19 in June.

She hopes to reunite next month with her now 6-month-old son Noah, who has been staying with Rodolfo Lopez's mother in Missouri.

"I block those memories out," Reyna Lopez, 31, told "Good Morning America" about missing time with her kids, specifically now with her son. "It gets really hard because I feel like I lost a lot of time with them. They're so big now." 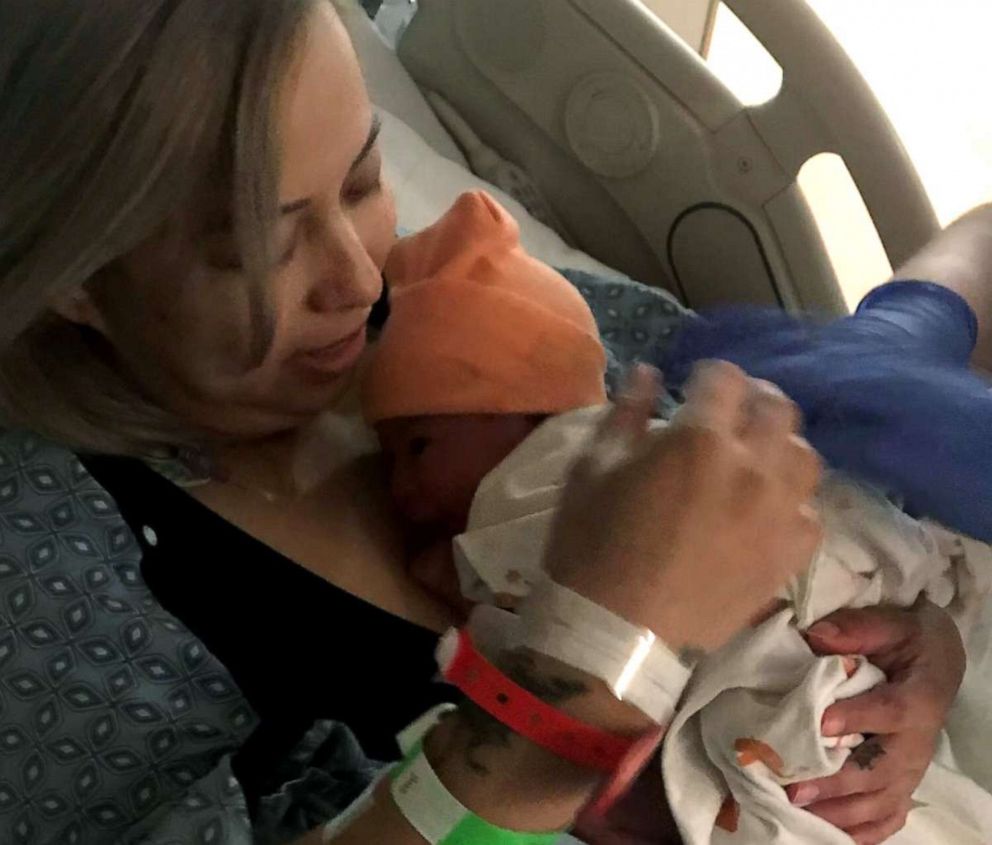 Both Noah and Rodolfo Lopez also tested positive for COVID-19 in June. While they both suffered manageable symptoms, Reyna Lopez's case was so severe that she was placed on a ventilator shortly after being admitted to the hospital, where she had to stay by herself due to COVID-19 restrictions.

"It was such a horrible experience, and that was only the tip of the iceberg in terms of things going downhill," Rodolfo Lopez told "GMA." "It was a very difficult time, me just being myself sick with a 2-month-old and I was not able to go near my daughters or talk to Reyna."

Reyna Lopez, who returned to her job at a title loan company three weeks after giving birth, was transferred to Mayo Clinic in Arizona in late June. There, she spent 88 days on ECMO, requiring a machine that temporarily takes over the work of the lungs and heart, according to Dr. Ayan Sen, who oversaw treatment for Reyna and who leads the critical care department at Mayo Clinic.

During the weeks and months that she was sedated, Rodolfo Lopez said he did Zoom calls with his wife several times a day so their daughters could see her and also spoke to her medical care team several times a day, often to disappointing results.

"I'd call about six times a day and it was just nothing has changed, she's still very sick," he said of his calls with doctors and nurses. "It was the same over and over, day after day and week after week. It was just numbing." 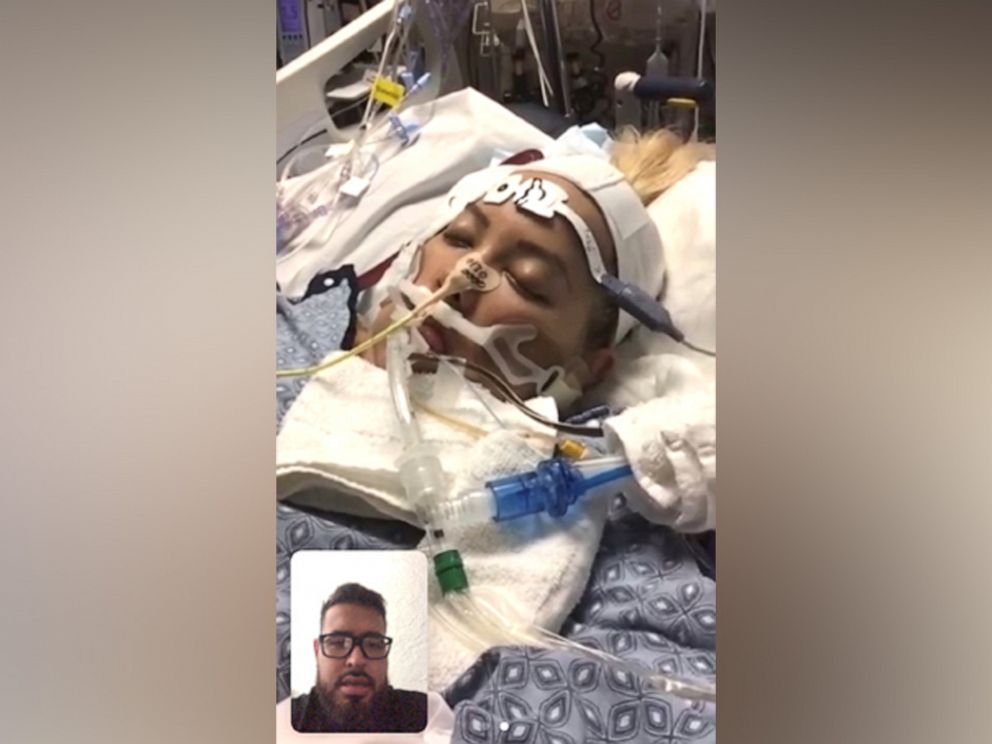 Courtesy Rodolfo Lopez
Rodolfo Lopez speaks via a video call with his wife Reyna while she was hospitalized with COVID-19.

Rodolfo Lopez finally got to see his wife in person in early August after Reyna Lopez tested negative for COVID-19. The mother was still sedated though and would not wake up for another month.

Around mid-September, Reyna Lopez smiled at her husband for the first time in months.

"She couldn't move anything but she looked at me and smiled," recalled Rodolfo Lopez. "We were really excited that she was awake, but then you realize that you have a whole other road ahead with physical therapy and speech therapy, a whole other set of obstacles."

"But she was there and we just kept moving forward," he said.

It is only at this point in Reyna Lopez's story that she is able to fill in the details herself, having no memory of her time in the hospital before waking up.

"[A nurse] was telling me the dates and I was like, 'No, it's June,'" she recalled. "To me it felt like it was just one night that I was asleep. It took them a long time to convince me that it was September."

Reyna Lopez suffers from rheumatoid arthritis and lupus, but takes medications for both and has them under control.

She and her family and doctors say they have no idea why she suffered so many complications from COVID-19.

They also say they don't know exactly how she was able to survive it. 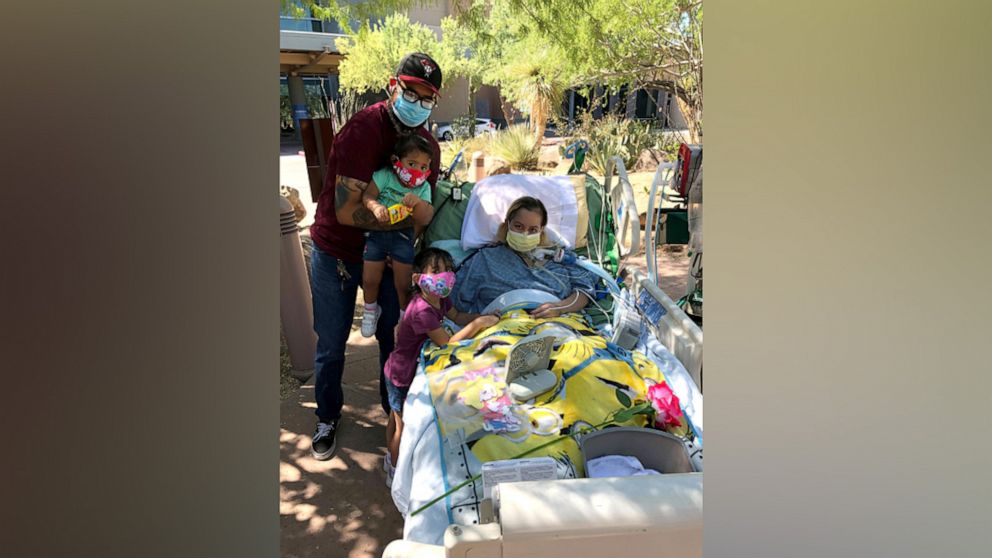 Courtesy Rodolfo Lopez
Reyna Lopez poses with her daughters and husband while hospitalized during her recovery from COVID-19.

"She eventually did turn the corner," said Rodolfo Lopez. "I don't know how and sometimes the doctors weren't able to explain, but she managed to come out of it."

"She had a tumultuous course that was very bleak at different periods of time in terms of the possibility of her recovery, but she beat all odds," added Sen, her doctor. "It takes a lot of courage and resilience and Reyna and her family showed it in abundance, to get her through a near death sentence."

After waking up, Reyna Lopez spent just over one more month at Mayo Clinic finishing her treatments and rebuilding her strength. She then spent one week at an outpatient rehabilitation center before she was able to return home.

She is still undergoing therapy to relearn how to walk and talk. She is also still on oxygen at home, one of the lingering complications from her battle with COVID-19.

"I have to be motivated and work really, really hard mentally and physically to get to the next step," she said. "Sometimes I want to just lay in bed, but I can't do that because I have to get back to normal."

MORE: This 14-year-old won a $25,000 prize for her research toward a potential COVID-19 treatment

Reyna Lopez said she is also dealing with the mental fallout from her COVID-19 battle, both for herself and her family.

"I'm with my two daughters at home and they are stuck to me right now because I haven't been with them for so long," she said. "If they don't see me they start getting worried that I'm not going to be home or that something went wrong."

"And I get very anxious all the time. Any bad news, small or big, I start panicking because I'm scared now," she added.

Reyna Lopez said she also has concerns about the "unknown" long-term effects of COVID-19, saying, "They tell me to just keep working on myself so that I can try to have a normal life again." 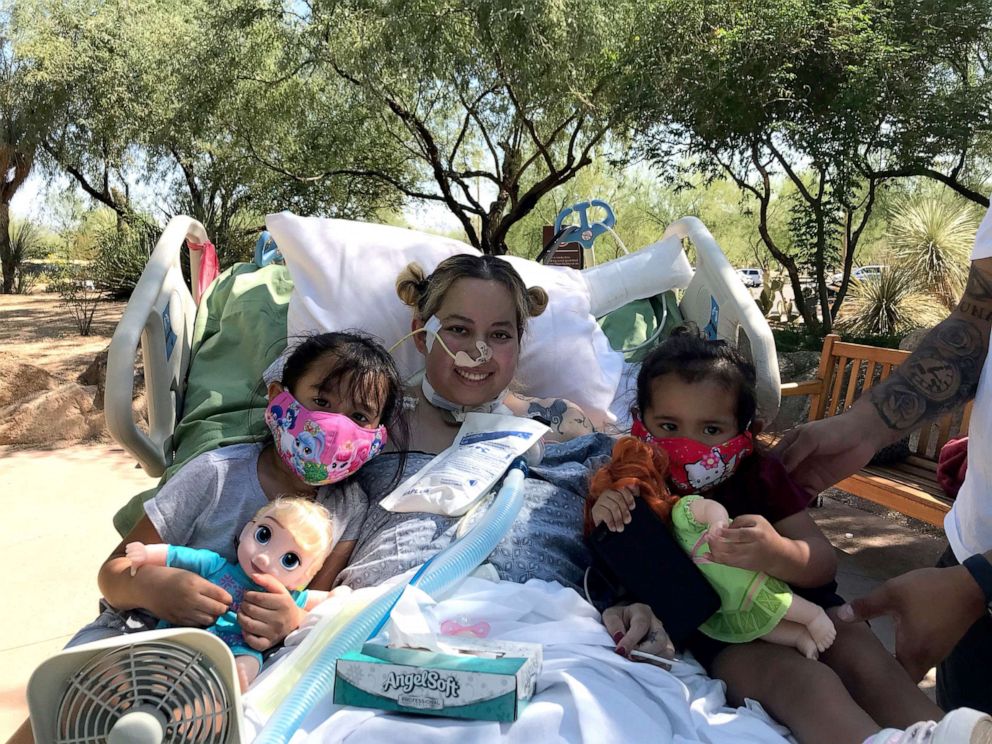 Courtesy Rodolfo Lopez
Reyna Lopez poses with her two daughters while hospitalized during her recovery from COVID-19.

A recent report from the Centers for Disease Control and Prevention found that some COVID-19 patients sick enough to be hospitalized have a higher chance of being re-hospitalized after recovering from COVID-19.

A separate study, published in The Lancet Psychiatry journal, found that 20% of people infected with COVID-19 are diagnosed with a psychiatric disorder within 90 days, most commonly insomnia, anxiety and depression.

The United States continues to be the worst-affected nation in the world by the coronavirus pandemic, with more than 10.2 million diagnosed COVID-19 cases and over 239,000 deaths.

While Reyna Lopez continues to recover, Rodolfo Lopez is on temporary leave from his job as a beer distributor in order to help care for his children and wife, who has not been able to work since her diagnosis in June. The family has started a GoFundMe in order to help cover their living and medical expenses.

"We never took this virus lightly, but this is the kind of thing that can really turn your whole world upside down," Rodolfo Lopez said of his family's experience with COVID-19. "People really need to see how serious it is."