Mirabella McCall was just a freshman in high school when she first started vaping.

By the time she was 19, she said, "It scared me how much of my time was dedicated to serving my nicotine addiction instead of benefiting my future self."

When McCall decided to quit, she documented her journey on TikTok and YouTube.

"I hoped that by telling my story, I'd have the opportunity to also help others," she told ABC News.

An estimated 3 million students in the U.S. use tobacco, according to a new report from the Centers for Disease Control and Prevention.

A recent study suggests that while the number of teens who vape started to decline from a peak in 2019, those who do are more likely to 'wake-and-vape,' or use an e-cigarette within five minutes of waking up.

Almost 80% of adolescents who used tobacco in 2019 started with e-cigarettes, according to the CDC.

Researchers from Massachusetts General Hospital looked at responses to the CDC's National Youth Tobacco Survey, which is administered annually to students in grades 6 to 12 nationwide.

They found that adolescents are starting to use e-cigarettes earlier in life. 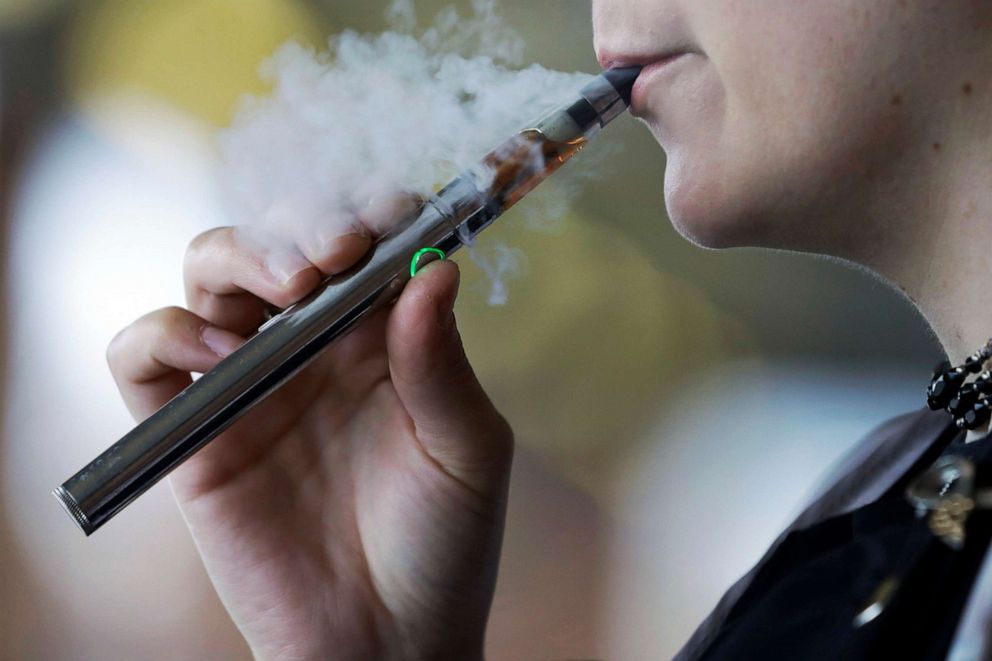 The average age of an adolescent starting to vape has decreased about two months each year over the last decade. At the peak of e-cigarette use in 2019, on average, adolescents were trying their first e-cigarette at 13 years old, according to the CDC survey.

Adolescents who vape also appear to be doing so more frequently and intensely.

Editor's Picks
MORE: My son was hospitalized for a vaping-related lung injury. Here's my plea to parents

The CDC said that many factors contribute to youth tobacco use including flavored products, a misperception of safety, and targeted marketing.

Many adolescents may believe that e-cigarettes are safer than combustible cigarettes, but this is false, according to experts.

"E-cigarettes have chemicals and toxins that will cause injury to the lung," said Dr. Panagis Galiatsatos, volunteer medical spokesperson for the American Lung Association.

The aerosol from e-cigarettes contains some cancer-causing chemicals, according to the American Cancer Society.

E-cigarettes can also harm the heart.

A recent release from the American Heart Association found that e-cigarettes were just as likely as traditional cigarettes to cause cardiovascular side effects such as high heart rate and blood pressure, and abnormal heart rhythms. These effects happened even though e-cigarette users were younger and smoked less than traditional cigarette smokers.

Flavoring is another factor that has impacted e-cigarette use and addictive potential.

Flavors are added to produce minty, sweet, or fruity taste and cooling sensation that can reduce the harshness of smoking. Research shows that flavors like menthol contribute to greater nicotine dependence, according to the American Lung Association.

The FDA partially banned flavored products in 2020. Last month, it denied marketing of the company Logic's menthol e-cigarette products, and placed some regulations on others.

Flavored ingredients are present even in seemingly non-flavored products. A recent study in Tobacco Control found that even "original" or "tobacco-flavored" products have high levels of sweet and fruit-flavored chemicals compared to a decade ago.

Adolescents have also been the target of marketing.

The CDC reports that 7 in 10 middle and high school youth in the U.S. are exposed to cigarette ads. Many ad themes like independence and rebellion are intended to appeal specifically to youth.

Dr. Shruti Paranjape, a pediatric pulmonologist at Johns Hopkins Children's Center, said there are "many reasons as to why kids start vaping in the first place -- experimentation, peer pressure, or as an effort to relieve stress and anxiety."

"If someone wants to stop vaping, my first plea is to talk to your health care provider" so that the clinician can help "guide, and provide appropriate health resources" for quitting, said Galiatsatos.

He also emphasized the importance of re-establishing community. "We're battling against a product that looks cool. If you're hanging out with other smokers, you're not going to stop smoking. They need a safe space where they are going to be accepted back into the community if they make that decision," he said.

Paranjape added separately, "Government regulations should address bans on the sale of flavored tobacco products and removal of these products from the marketplace. There should be more teen-focused information about the dangers of vaping and education about prevention."

McCall, meanwhile, said she wants other young people who want to quit vaping to know that there is a "big supportive community" that wants them to succeed. She now works with the nonprofit Truth Initiative, which provides free, anonymous resources to youth trying to quit vaping.

"I was addicted for four years. I was starting to see what nicotine addiction was doing to me and my generation," she said. "I thought about the life I wanted to lead. That realization motivated me to quit."

This article was updated to note Mirabella McCall's work with the nonprofit group Truth Initiative.