With many students heading back to school soon, researchers are gathering information that can help schools set COVID protocols.

Some devices being studied are portable air purification units, which could add a layer of protection and slow the spread of aerosols and droplets in a classroom setting. In fact, New York City plans to have such devices in its classrooms.

“Good Morning America” got an exclusive look at testing by the Mayo Clinic and the University of Minnesota at the Well Living Lab to examine these devices.

“I think it just provides another layer of security for people,” Dr. Bruce Johnson of the Mayo Clinic told “GMA.”

In its study, a team of more than 20 researchers built an experimental “classroom.” They rigged up a mannequin in the center to spray out a neon-colored solution to mimic how a sick student might spread particles as they breathe.

Then, researchers measured what was collected on 70 surfaces all over the room, such as desks, chairs and iPad, to see how the droplets spread with and without air purification.

MORE: Scientists tested 14 types of masks: Here's what worked and what didn't

“We’re able to say at each point in the room -- how quickly are particles depositing on different surfaces,” researcher Dr. Zachary Pope said. 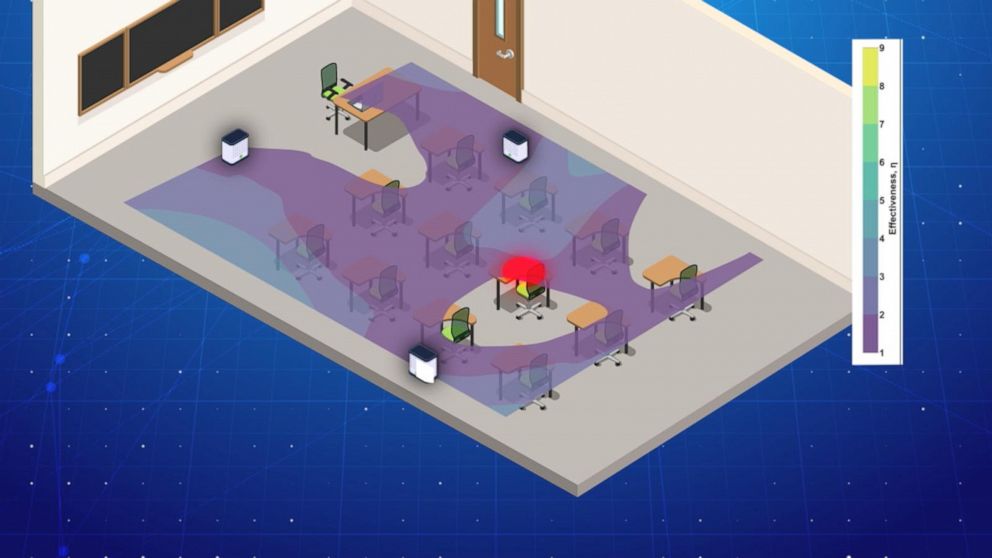 GMA Graphics Department
The red spot on the map illustrates an infected student while the colored areas show where air purification units are removing particles from the room.

In the heat map above, an illustration of the experiment shows how air purifiers come into play when placed in the classroom. The red spot on the map illustrates an infected student or person in a room and the colored areas on the map shows where air purification units are removing particles from the room.

“We see a reduction everywhere,” University of Minnesota mechanical engineering professor Dr. Chris Hogan told “Good Morning America.” “So that’s why you see the blue and the green are much lower concentrations.”

Researchers also found that using portable air purifiers to supplement a classroom HVAC system, it may result in up to five times lower particle concentration in the air, improving air quality throughout the room, not just near the unit.

The study from the Mayo Clinic and the University of Minnesota drew similar results to a study from the Centers for Disease Control and Prevention conducted earlier this month.

MORE: Visual demonstration investigates the efficacy of plexiglass amid the pandemic

The agency now recommends schools should “filter and/or clean the air in the school by improving the level of filtration as much as possible.”

“I think they [parents] should be put at ease in the sense that we have solutions available,” Hogan said. “There’s a lot of information that is -- now available to school administrators and they should be comfortable with the fact that they’re looking into it. And hopefully will be able to implement these solutions.”

If an air filtration system is beyond your budget, another option would be to update your HVAC system or open a window to add that layer of protection.