It's a bird, it's a plane, it's a pharmacist in a Superman suit on a mission to vaccinate his community.

Dr. Mayank Amin, 36, is the owner of Skippack Pharmacy in Lansdale, Pennsylvania. Over the past year through the pandemic, his efforts to keep his community safe have been nothing short of superhuman.

The 50-year-old independent pharmacy in Amin's community had shut down while he had taken a break from being a pharmacist to change careers -- becoming an event planner. When he saw the concern among elderly neighbors about getting their medications after the local pharmacy closed, he decided to step in and build his own in the same space. 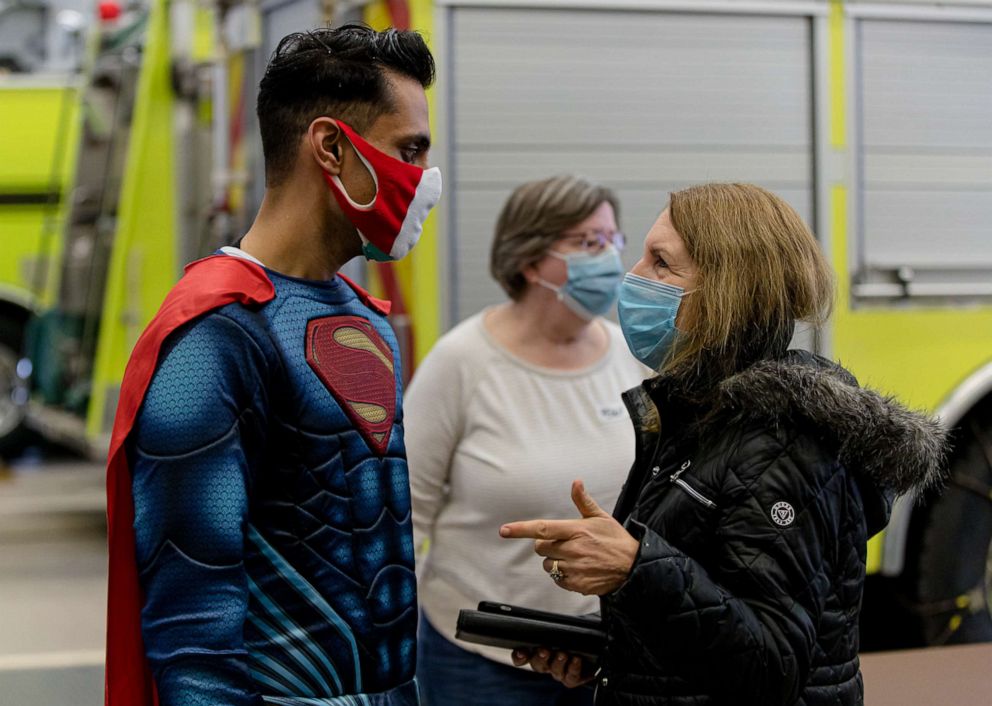 BP Miller/Chorus Photography
Dr. Mayank Amin's goal is to get everyone in his community vaccinated by the end of May.

"These folks were very lost," Amin said. "So I said, 'You know what? I'm going to stick up for my community and bring this place back to life.' We're going to be a community pharmacy and give people a memorable experience.'"

The need for Amin's pharmacy only grew as more Americans got COVID-19.

"When this pandemic first hit last year, I saw the fear in people's faces when they were walking through our doors," Amin said. "That's when we went from 9 a.m. to whenever I couldn't stand anymore. I'd be at the pharmacy till 2, 3, 4 o'clock in the morning every single day."

Amin and his family made another another sacrifice as well. With his wife was pregnant with their first child, out of an abundance of caution, she went to live in New Jersey and quarantine with her parents while Amin stayed to serve the community as an essential worker.

"She's not been alone during this pregnancy, but typically moms and dads are together and going through everything," Amin said. "She sacrificed that whole aspect to let me be here for our community." 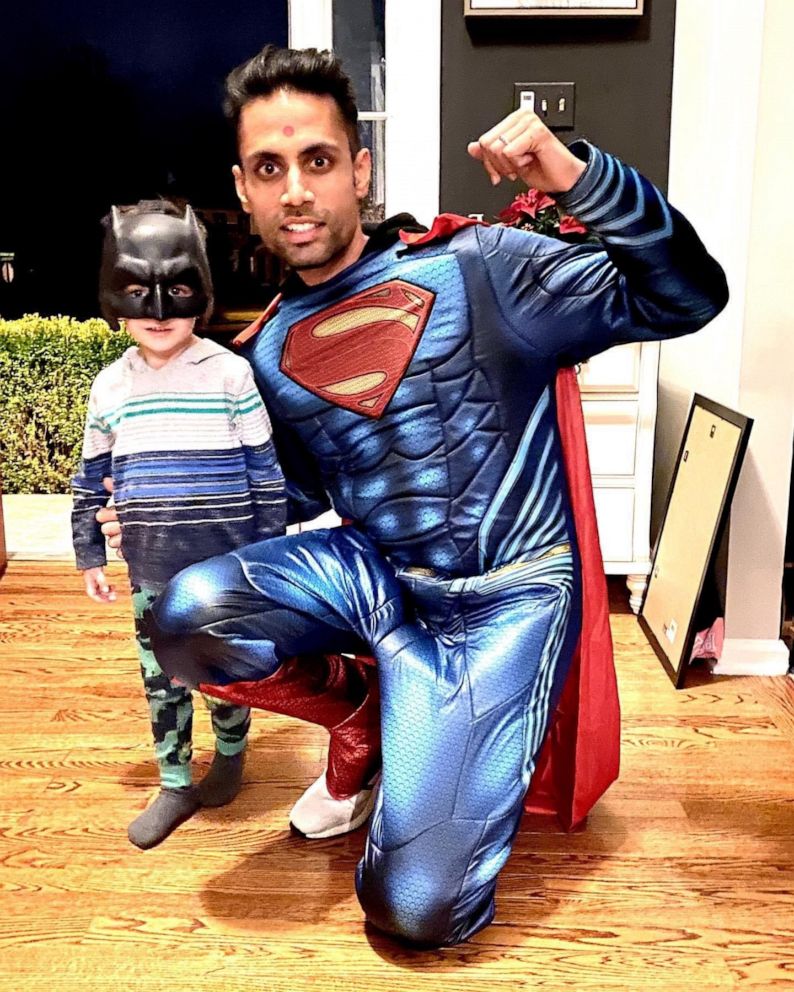 At the end of a grueling year, on New Year's Eve, Amin had one more prescription to fill. It was for a child, and since the pharmacy would be closed by the time he finished filling it, he decided to make a home delivery -- with a twist.

"So I had a [Superman] costume. I went out to their house and rang the doorbell. The little boy came to the door and actually thought Superman came to deliver his medications," Amin said. "[The customer's] son, to this day, thinks I'm Superman."

The joy on the young boy's face gave Amin the idea to continue surprising people in his community with his Superman suit -- this time when it came to COVID-19 vaccinations.

On Super Bowl Sunday, Skippack Pharmacy received 1,200 vaccines. There were 8 inches of the snow on the ground, and Amin knew he would have his work cut out for him. The next day, with two volunteers, he put on his Superman suit and went to vaccinate the community. 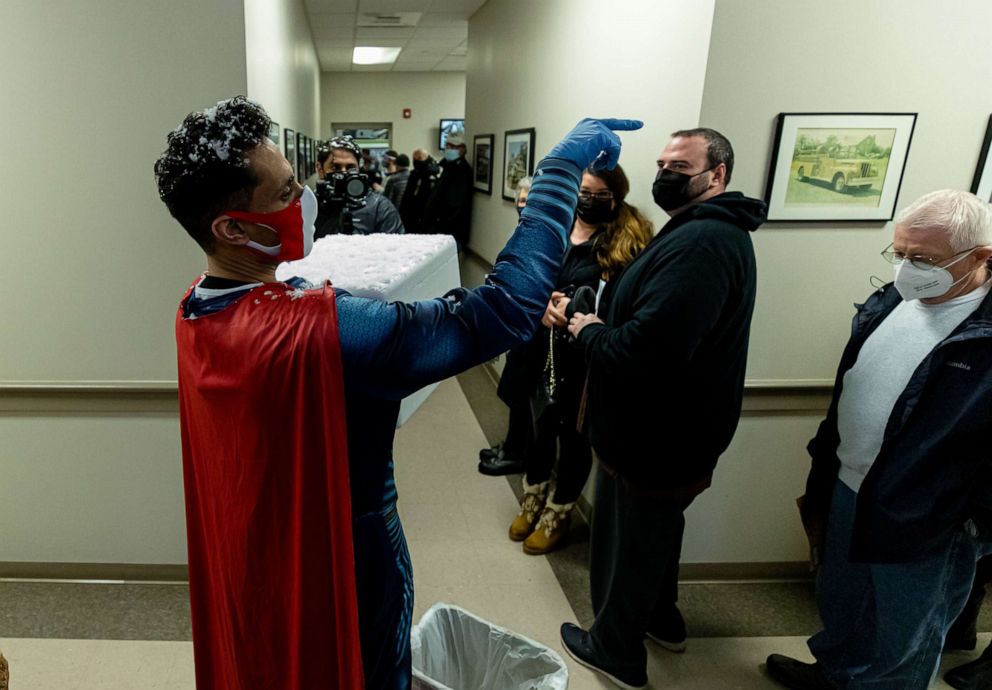 "As I was walking with that box of 1,200 vaccines, everyone was just cheering. It was a celebration outside. And people didn't care how cold it was or about the snow," Amin said. "This was a union of our community and there was one crazy pharmacist that was wearing a costume."

MORE: Grandmother reunites with grandson after 15 months apart due to COVID-19

Amin said the elderly people who received shots stopped him and asked him to get pictures. One man, an Army veteran, stopped Amin and said something that really touched him.

"He said, 'As people that serve this country, we usually bow down and we salute our dignitaries, other veterans, people that serve our country. Today I'm giving you the biggest medal that any veteran can give,'" Amin said. "Then he put his hand up to his forehead and saluted me."

Since that initial vaccine offering, Amin has vaccinated thousands in his Superman suit. He has upped his volunteer base to nearly 450 people as thousands more vaccines continue to be shipped to his pharmacy.

He hopes to continue not only bringing smiles to people's faces, but keeping his community safe.

"My goal is, I told my wife, by the time we have our baby in May," Amin said, "I want everyone around here vaccinated."