In the weeks leading up to the U.S. women's national soccer team winning its fourth World Cup, the team's players were tracking not only their diets and workouts but also their period cycles.

Dawn Scott, high performance coach for both the USWNT and the National Women's Soccer League, credited the breakthrough use of period tracking as one of the strategies the team "deployed that helped us win."

Period tracking -- knowing the time of your menstrual cycle as well as the symptoms -- is a tool that all women, not just professional athletes, can benefit from, experts have said. 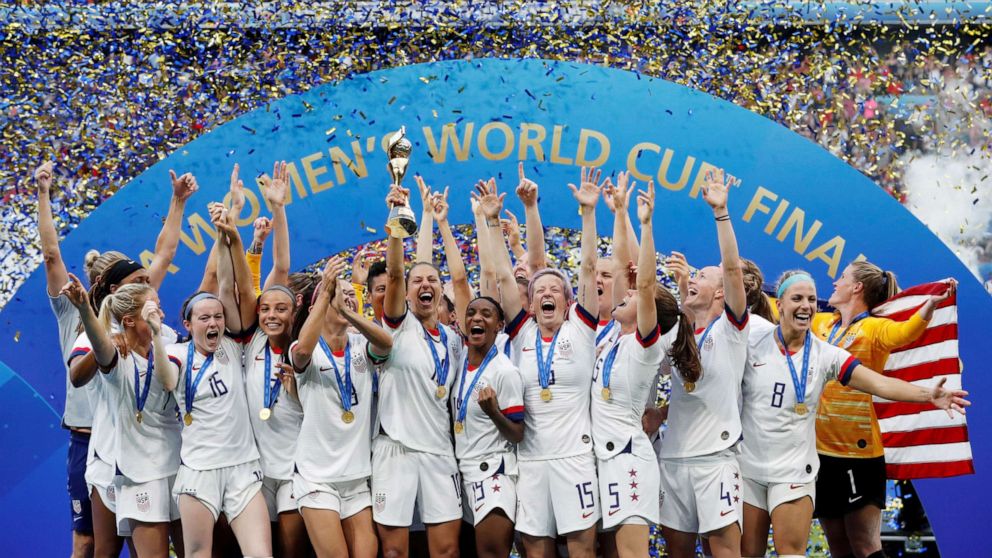 "It's important to realize as women we do have ups and downs and there are hormones that are predominant in our cycles, and it’s different for every woman," said Dr. Rashmi Kudesia, a board-certified OBGYN at Houston Methodist and CCRM Houston in Texas. "When you think about how many things you plan ahead for, it totally makes sense to know your body."

Kudesia noted the majority her patients do not track their periods and the majority of those who do are tracking to know their ovulation in order to get pregnant.

Period tracking like the USWNT players did, though, is more about improving your everyday life than seeking a big goal like pregnancy. It can help women know when they'll have the most energy, what week they should keep their evenings free in order to have downtime and when they should plan their hardest workouts, according to both Kudesia and Dr. Georgie Bruinvels, the U.K.-based research scientist who created a period tracking app used by the USWNT.

"People say, 'I definitely know my mood changes,' or, 'Sometimes I just wake up and I’m so hungry,' but they haven’t had a way to relate that to their natural physiology," Bruinvels told "Good Morning America." "What I've found is women wanted is to be informed and know their own bodies."

Changing hormone levels (estrogen and progesterone) throughout the cycle can cause symptoms like depression and anxiety, asthma, cramping, bloating and gas, in addition to bleeding, according to the U.S. Office on Women's Health.

Phase one is the bleeding phase of menstruation, when a woman is on her period and bleeding. 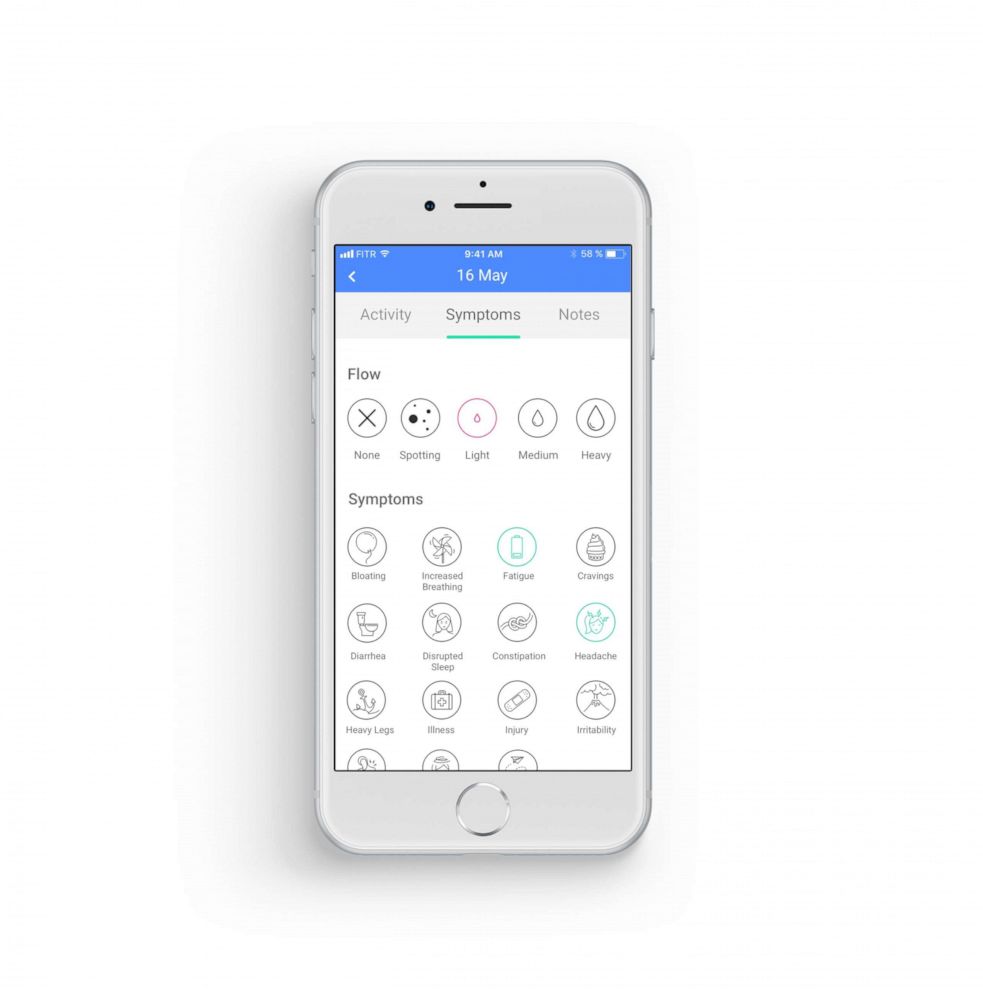 Phase two lasts for six to 10 days after that, while phase three starts just after a woman's body ovulates, when progesterone and estrogen levels are high.

Phase four goes back to pre-menstruation, when a woman's hormones decline as she prepares for phase one again.

Bruinvels and her team at Orreco, the sports performance company behind the free FitrWoman app, used research-based evidence to match symptoms and solutions with each phase.

The USWNT, for example, had posters throughout their lodging during the month-long World Cup in France reminding them of the different phases and how to treat themselves accordingly, according to Scott.

What an amazing 24 hours ! An incredible journey with the @USWNT where those women continue to inspire the WORLD and equality on and off the field. Special mention to @buddyhutt and @julesrules625 for their work and support across the team + the @NWSL #teamworkmakesthedreamwork pic.twitter.com/ImJnSFTXjL

Phase one, when you're on your period, is a time to eat fibrous carbs, like whole grains, and avoid foods high in saturated fats and food that are inflammatory, like fast food, according to Bruinvels.

In phase two, the increase in estrogen can boost a women's mood and leave her feeling more energized. In this phase it's best to have a healthy, balanced diet, but there is not a major need to avoid any foods.

When it comes to strength and conditioning, research has shown that a body's ability to adapt and respond is better in these first two phases, so they are a great time to do a high-intensity workout like a circuit class, according to Bruinvels. 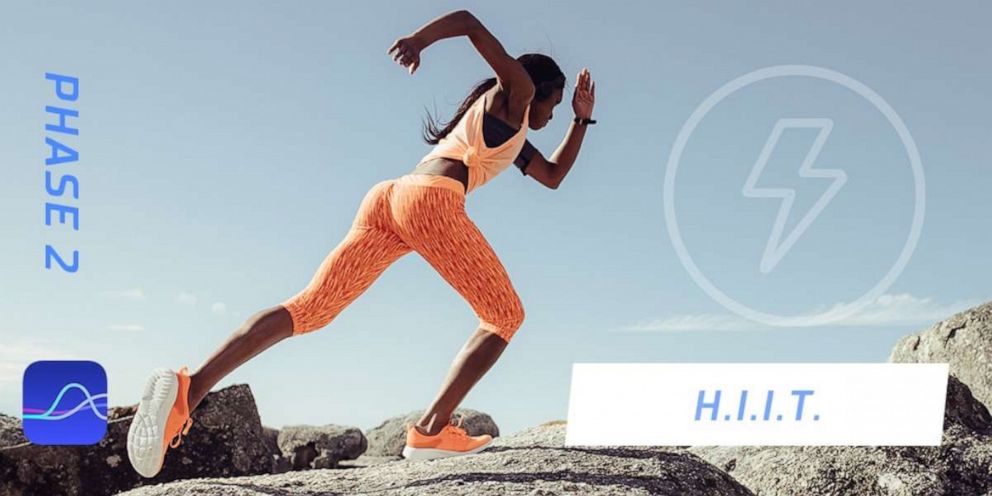 FitrWoman/Orreco
HIIT workouts are recommended in Phase 2, according to FitrWoman.

When progesterone and estrogen levels are high in phase three, some feel their mood can be altered and a woman's appetite may increase and she may feel more fatigued.

(MORE: Meghan Markle gives new voice to issue of menstrual hygiene: Here is why you should care)

In this phase, Bruinvels recommends eating healthy fats like avocados and nuts and eating mini-meals throughout the day versus three meals and two snacks. Foods that are processed and high in sugar are best to be avoided, as well as caffeine. 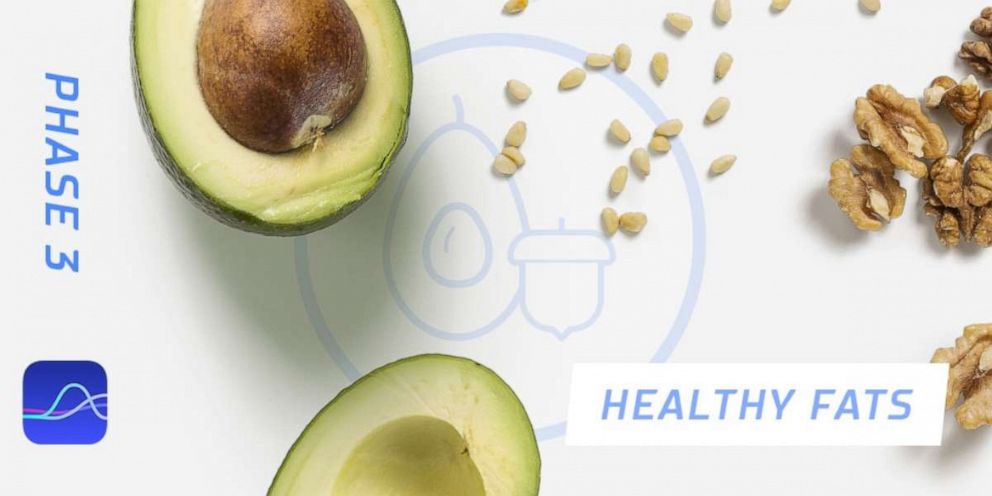 FitrWoman/Orreco
Healthy fats are recommended foods in Phase 3, according to FitrWoman.

In the pre-menstrual phase, phase four, it's best to prioritize foods rich in nutrients and fiber, like whole grains, fruits and vegetables. Foods to avoid during this phase include processed meats and fast food.

"You should be working with your hormones, not fighting them," Bruinvels said. "Women have just accepted that they’re going to feel pain and feel like rubbish at some point, and we should start challenging that expectation." 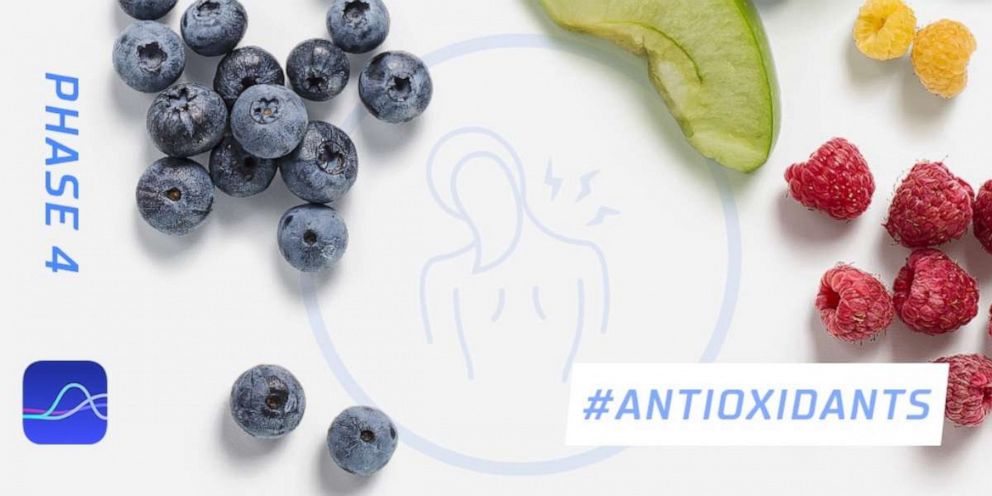 FitrWoman/Orreco
Antioxidants are recommended foods in Phase 4, according to FitrWoman.

"[My research] makes me excited because though people get bad symptoms, you can do so much about it," she added.

Both Bruinvels and Kudesia stress how individualized menstrual cycles are for each women, which makes tracking your cycle all the more important, so you know what symptoms to expect and how to treat them.

Kudesia pointed out that women should not add another stress to their lives by being concerned about tracking every detail of their period, though. While professional athletes and high-powered executives may need to function to a degree that rigorous tracking is required, for the average woman, it's about being aware and being kind to your body.

"My hope is it gives women a push to be aware of what their symptoms are and plan ahead and intervene so we’re not just struggling through them every month," she said. "Think of it as a smart self-care approach that takes into account your physiology."

Kudesia also noted that period tracking is not something that would be effective for women on hormonal birth control, as their hormones are regulated by the birth control pills.

Regardless of how in-depth their period tracking is, Kudesia wants women to to know that their menstrual cycle and the hormones that go with it are not a punchline about bad moods and bleeding, but one of the most critical parts of their well-being.

(MORE: A documentary about menstruation won an Oscar. Here's what the director of 'Period. End of Sentence.' wants to happen next.)

"I think for so long people have treated the concepts of period as something dirty or as a joke," she said. "But for women, the menstrual cycle is the fifth vital sign and is just as important to your health as your heart rate, blood pressure, pulse and body temperature."

Bruinvels said she hopes the spotlight the USWNT's World Cup win has put on period tracking makes women realize that menstruation is more about hormonal changes in their bodies than it is about bleeding.

"There’s a taboo around periods because people think about it only when they’re menstruating and bleeding, but hormone fluctuation is the root of all of it," she said.