By Carson Blackwelder, Hayley FitzPatrick, Angeline Jane Bernabe
Video by Brittany Berkowitz, Will Linendoll
Share —
Sign up for our newsletters to get GMA delivered to your inbox every morning!

This year's ceremony was co-hosted by Luke Bryan and Peyton Manning and held at Nashville's Bridgestone Arena. Luke Combs was the big winner of the night, taking home the top award for entertainer of the year.

Keep reading for more of the biggest moments from the 2022 CMA Awards.

Before the show kicked off, country music stars and more lit up the red carpet in their best looks.

Another common theme on the red carpet was metallic colors, which were worn by Thomas Rhett's wife Lauren Akins, and Reba McEntire. 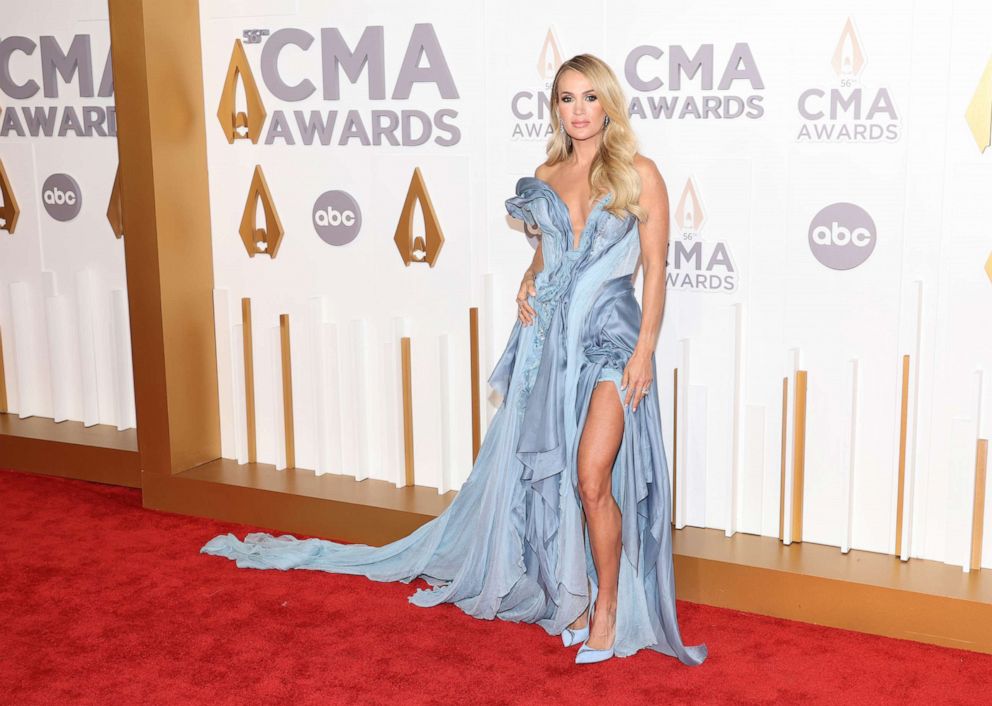 Carrie Underwood's Cinderella-inspired gown turned heads. The "Denim & Rhinestones" singer stepped out on the red carpet in a light blue gown with a high slit and matching pale blue pumps.

The show began by showing a clip of Loretta Lynn accepting the top award for entertainer of the year at the 1972 CMA Awards -- the first time a woman won the coveted trophy.

To pay tribute to the country music legend, a trio of iconic performers took to the stage to perform some of Lynn's biggest hits: Carrie Underwood sang "You Ain't Woman Enough," Miranda Lambert sang "Don't Come Home a Drinkin' " and Reba McEntire sang "You're Lookin at Country." They then took on Lynn's most iconic song, "Coal Miner's Daughter," together. 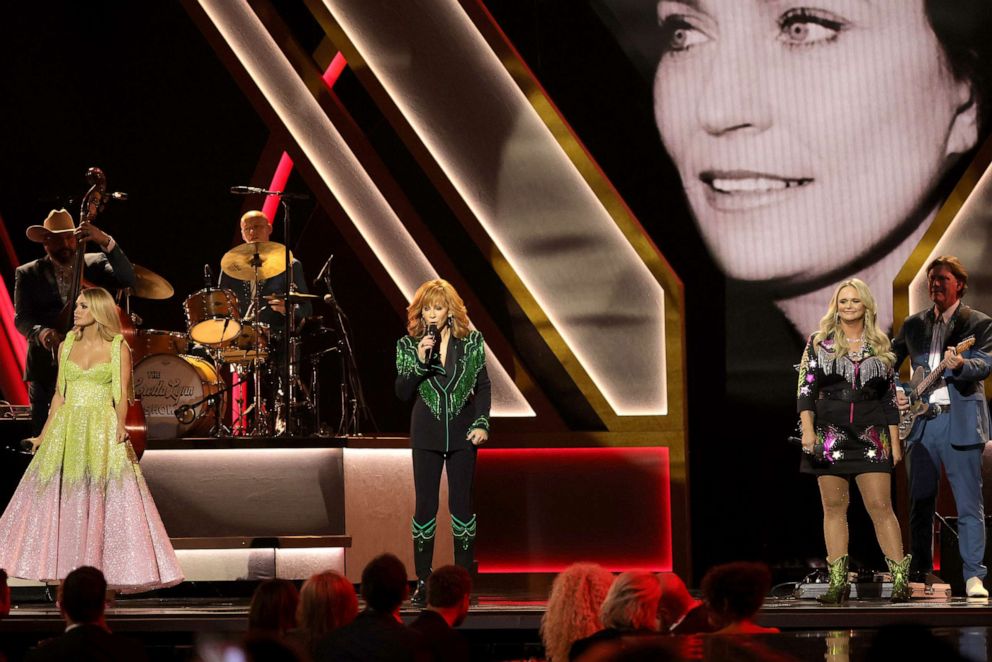 "I never met Loretta -- always wished I would've -- but I wrote this song in tribute to her because I so admire everything about her, especially how she wrote about her life, unapologetically," Pearce said. "Loretta, this is for you."

While awards are one reason to tune in, another major draw of the show is a chance to see some of the biggest country singers perform -- after all, it's called "country music's biggest night" for a reason.

Giving us some '90s nostalgia, Cole Swindell performed "She Had Me at Heads Carolina," before he was joined by Jo Dee Messina to duet her 1996 hit "Heads Carolina, Tails California." Swindell's song is heavily inspired by Messina's debut single.

Surpriiise! 😉🥰 Everyone welcome @JoDeeMessina to the stage with @ColeSwindell for "She Had Me At Heads Carolina"! We love us some '90s Country! #CMAawards pic.twitter.com/mhcYCX0K6t

The #CMAawards collaboration we never knew we needed 🙌 Give it up for @ChrisStapleton and Patty Loveless! pic.twitter.com/NUkc7VTAWZ

Elsewhere, The War and Treaty and Brothers Osborne performed The Rolling Stones' "It's Only Rock 'n Roll" while Elle King and The Black Keys performed Jerry Lee Lewis' "Great Balls of Fire." 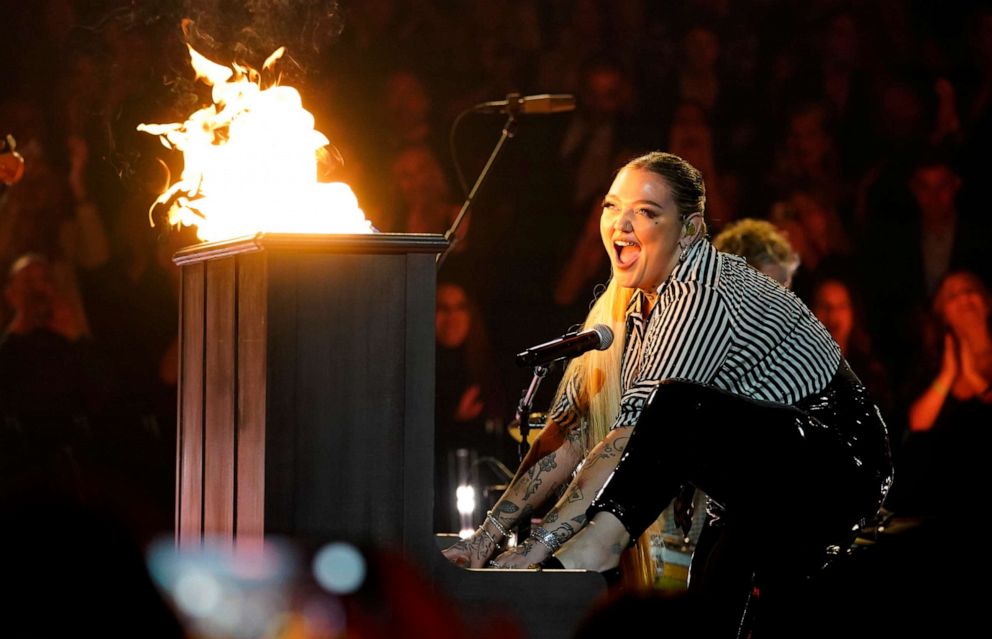 Mark Humphrey/Invision via AP
Elle King performs "Great Balls of Fire" during a tribute to the late Jerry Lee Lewis during the 56th Annual CMA Awards on Nov. 9, 2022, at the Bridgestone Arena in Nashville, Tenn.

Solo performances included Miranda Lambert with "Geraldene," Carrie Underwood with "Hate My Heart," Luke Combs with "The Kind of Love We Make," Luke Bryan with "Country On" and Morgan Wallen with "You Proof."

Wynonna Judd took to the stage to present the award for vocal duo of the year, marking her first CMA Awards appearance since the tragic death of her mom, country legend Naomi Judd, in April. The mother-daughter duo, known as The Judds, won this award seven times previously.

"In death there is life, and here I am," Judd said upon taking the stage. "Thank you for your love and your support. These past six months have been a time to grieve and a time to be grateful, and I am humbled and honored tonight to still have a seat at the table of country music."

Taking home the trophy this year were Brothers Osborne, consisting of T.J. and John Osborne. This is the siblings' fifth time winning in the category. 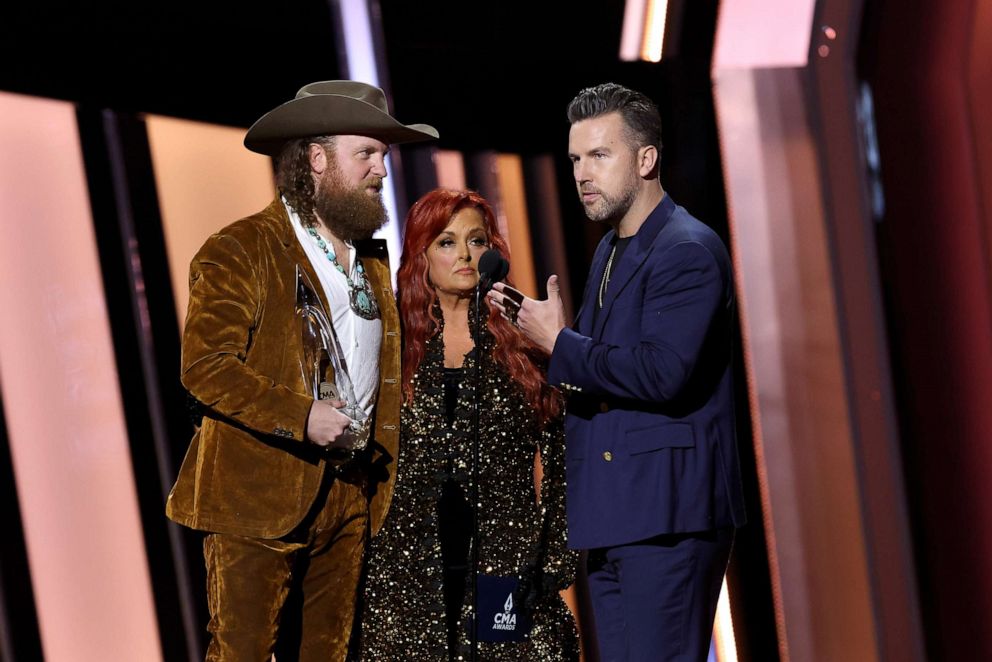 "To be here tonight and then to be in the presence of Wynonna while winning this award will be one of the biggest highlights of my entire life," T.J. Osborne said. "This is so crazy to me."

"It's an absolute honor," John Osborne said, echoing that sentiment. "We have learned so much from you and your family."

John Osborne then revealed onstage that his wife Lucie Silvas is pregnant with twins, the couple's first children together. "I love you, babe," he said. "You're going to be an amazing mom."

"Country music's been real good to me, and I fell in love with it when I was a young man," the Country Music Hall of Fame member said while accepting the award.

"I've just been such a fan of this music, and I wanted to come to Nashville and try to carry it on -- the kind that I loved," he continued. "As my mama would say, I'm so blessed, and I have been so blessed. I've had a great team around me my whole career that have helped me and great songwriters and just I've been so fortunate to have all that to help me get this far." 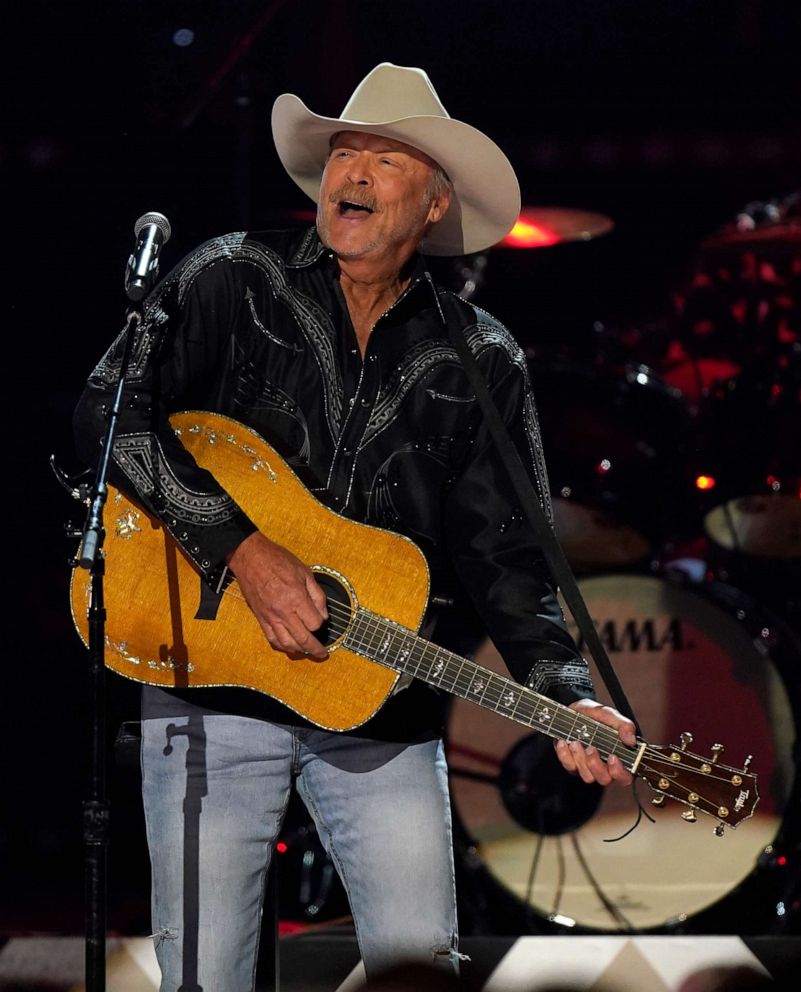 To celebrate Jackson, Dierks Bentley, Jon Pardi, Carrie Underwood and Lainey Wilson took the stage for a tribute performance that included many of Jackson's most famous hits.

Underwood kicked off the tribute with Jackson's classic "Remember When." Bentley then took over to perform Jackson's "Chattahoochee," Pardi belted out Jackson's "Drive (For Daddy Gene)" and Wilson sang Jackson's "Chasin' That Neon Rainbow."

Jackson then took over and got the crowd dancing with a performance of his hit, "Don't Rock the Jukebox."