"The Light Pirate" by Lily Brooks-Dalton is our "GMA" Book Club pick for December.

The novel is set in the near future and Florida is slipping away. The sunshine state has been battered by devastating weather patterns and rising sea levels that have wreaked havoc on the state's infrastructure. As a hurricane approaches a small town on the southeastern coast, Kirby Lowe and his pregnant wife Frida, along with their two sons, prepare for the worst. 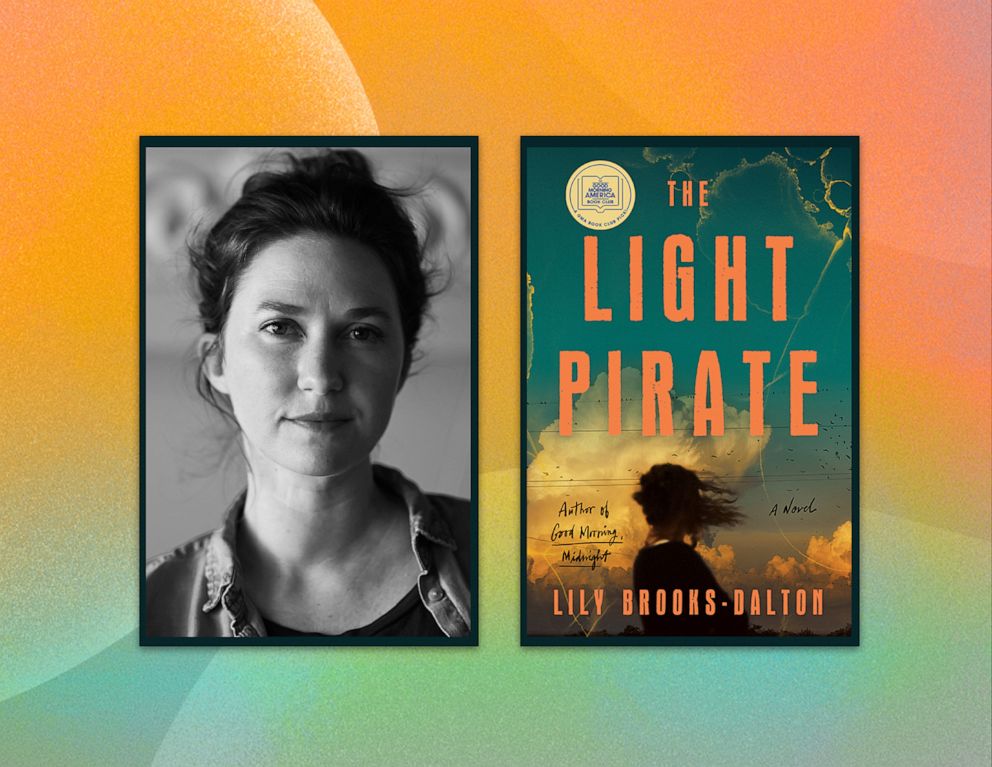 Just before the hurricane hits, the two boys go missing and Kirby heads out to search for his children. While alone, Frida goes into premature labor and gives birth to an unusual child, whom she names Wanda after the catastrophic storm.

This hopeful story of survival and resilience spans Wanda's extraordinary lifetime as she combats uncertainty and humanity's deeply-rooted impact, both quickly and slowly, dissolving the natural world as we know it.

Brooks-Dalton is author of "Good Morning, Midnight," which was recently adapted into the hit film "The Midnight Sky" by George Clooney. Her second novel, "The Light Pirate," builds off of what it means to gain a community, seek adventure and adapt to a changing future.

Read and listen to an excerpt below and get a copy of the book here.

'The Light Pirate' by Lily Brooks-Dalton

Frida watches Kirby from the kitchen window while she washes Yukon Golds beneath a thin trickle of water. Scrubbing at the dim yellow skins, she decides not to peel them. Maybe the boys won't notice if she mashes them thoroughly enough -- and if they do, she will cite nutritional value. Outside, beneath a bloated purple sky knifed with the sharp fronds of a coconut palm, Kirby stacks sandbags against the door to the tool shed. Even with the AC blasting, Frida can smell the rich stink of thunder in the air, something like ozone and gasoline and dirt all mixed together. The hurricane is close now. She can taste it.

The baby kicks so hard she holds on to the counter until it stops. It feels as if this tiny, unborn thing could topple her. She asked -- no, begged -- Kirby to take them north, beyond the cone of uncertainty, but this is the third hurricane of the season and the third time she's wanted to evacuate. The first one fizzled into a tropical storm before it even reached land. Heavy rain and a stiff wind and that was all. The second crawled up the opposite coast, wreaking havoc in Sarasota and Tampa, then swung back out into the Gulf. Before each one, he listened quietly to her pleas, calming her fears without succumbing to them, but then this morning something in her husband shifted. "Get yourself together," he snapped. "We're not leaving." She was stung, shocked by the hardness in his voice. A new sound. Or new to her. It was just over a year ago that they met. Only six months since they married. There's so much to learn about one another.

Even if he were not bound to these storms by his work as a lineman, he would still be bound by something else. She has always understood this about him. He would still insist that this house is the safest place for them. This house -- fortified by his labor, shielded from ocean winds by the wild tangle of live oak and cypress that looms just beyond the yard, but mostly guarded by the strength of his will. And isn't this at least partly why she fell in love with him? This faith in the strength of his own preparations. This promise of protection. A stolid, immovable weight -- the anchor secreted inside his rib cage, holding him to the earth, to Frida, to Florida. If he believes they are safe, then maybe she can, too.

Resting a hand on her huge belly, she drops the last potato into the colander and twists off the faucet. The panic that has been with her all morning sharpens. It wasn't always like this. She used to be brave. Didn't she? The woman she was feels impossibly far away now, like a dream she can't quite remember. A thump outside startles her, but it's only Kirby laying down another sandbag. This is who she is now. The anxiety has become part of her. There's something about the way the baby has been stirring today that is almost urgent enough to make her get in the truck and go north by herself. There are his keys on the table. She could just leave everything where it is: chicken already in the oven, greens on the cutting board, potatoes in the colander. Would she take her stepsons? They wouldn't come even if she wanted them to.

All morning, the roiling clouds have been wrapping tighter and tighter around the sky and now all the blue has been squeezed out of it. Out the window, she watches Kirby admire his pile of sandbags in front of the tool shed and move on to the house, so sure his preparations are impenetrable. So sure of victory against his old adversary. The big coconut palm hanging over the yard sways. Its roots are sunk deep beneath the wilderness lurking at the edge of the property, but its trunk swings out over the lawn as if the wild is reaching for the house with those big fingerlike fronds. As if it's trying to caress the family that lives here, or to crush them all. Or both. Frida knows all about beauty and violence arriving together. She's seen it up close; she knows what nature can do.

Kirby lifts a conciliatory hand when he sees her there in the window, and Frida, still holding her belly, trying to shrug away this sense of dread, turns away without acknowledging him -- not because she is angry but because she is frightened. When they fought earlier, he took her frantic appeals to evacuate as an insult. "Why can't you just trust me?" he asked, bewildered. She didn't know how to tell him that this was the wrong question without knowing what the right one was. They still haven't made up.

Kirby's boys come tearing into the kitchen just then, all arms and legs and sounds too big for those little bodies. They are immune to the fear that curls up on Frida's shoulders, nestling softly against her neck, pressing up against her windpipe -- a gentle, invisible stranglehold. They feel only excitement in the simmering electricity of the atmosphere, the barometric pressure plummeting as each hour passes. She can almost see the current running through them: Lucas skidding across the tile floor in his dirty white socks, Flip leaping after him, midair, falling, fallen, and upright again, all in the space of a breath.

"Boys," she chides, doing her best impression of a mother. She has so little to guide her in these matters -- when she was growing up, her own mother's defining characteristic was her lack of mother-ness. Everyone said so. It isn't that Frida regrets the way Joy raised her. How could she? Her childhood was singular, spent sailing between islands, with salt in every crevice and a vision of the sun permanently etched into the backs of her eyelids. She grew up everywhere and nowhere. The Keys, Puerto Rico, the Bahamas, Haiti, Panama, Venezuela. The only constants during Frida's formative years were her mother and their decrepit sailboat and the ocean itself. There was no school outside of Joy's instruction, and the friends she did manage to make could last only until Joy announced a departure date. When they pulled anchor, Joy always said it was time to find a new pair of sea legs. What's wrong with the old ones? Frida would think. But she never complained. Of course she used to be brave. She had to be.

"Boys!" Frida says again, louder this time, but it still feels like a performance, something she's only seen on television. They can tell, and so can she. If Joy were here, she would do all of this differently. She would be running through the house alongside them, playing their games, learning their secrets. She would be so unrelenting in her mission to win them over that finally these boys would have no choice but to love her. Except Joy isn't here. This is the ache Frida is learning to live with.

She hears Flip and Lucas hurtling through the living room, the brisk creak of the screen door opening, and then a slap as it swings back against its frame. Out of sight, Kirby roars and the boys shriek, even Lucas, who recently decided that twelve was too old for games like this. All three of them round the edge of the house, back into view—the boys darting past the window, Kirby lumbering behind them with arms overhead, fingers wiggling. Frida instructs her nerves to settle and shoos away this circling, spinning unease. See, she tells herself, it isn't real. No one else feels it. Everything is fine. She holds this assurance. Examines it. Does she feel better?

Maybe. But then the baby, turning again and again, thrusting its limbs up against the constraints of her womb, up into her intestines, dislodges the seed of calm. Everything is not fine.