Prince William is speaking out about the protests he and his wife Kate, the Duchess of Cambridge faced during their tour of the Caribbean.

William addressed their trip in a speech Wednesday at the unveiling of the National Windrush Monument, which honors those who arrived in the U.K. from Caribbean countries between 1948 and 1971.

Windrush Day, commemorated annually on June 22, is the day Caribbean immigrants arrived on Britain's shores on the ship Empire Windrush, in 1948.

"Our trip was an opportunity to reflect, and we learnt so much. Not just about the different issues that matter most to the people of the region, but also how the past weighs heavily on the present," William said. "Sadly, that is also the case for members of the Windrush Generation who were victims of racism when they arrived here, and discrimination remains an all too familiar experience for Black men and women in Britain in 2022." 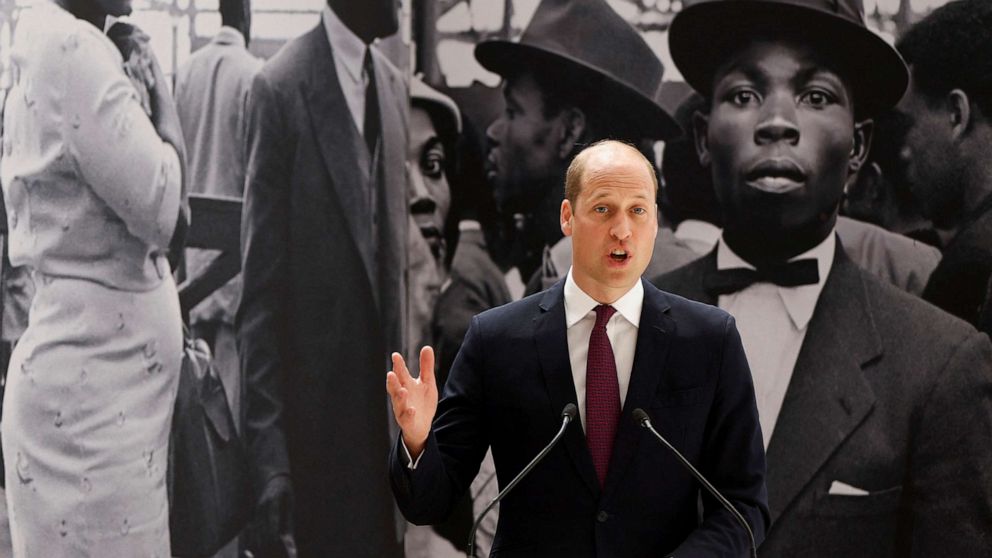 John Sibley/Pool Photo via AP
Prince William speaks during the unveiling of the National Windrush Monument at Waterloo Station in London, June 22, 2022.

During their Caribbean tour in March -- meant as a gesture of gratitude for the Commonwealth's support of Queen Elizabeth II, who celebrated 70 years on the throne earlier in June -- William and Kate were forced to cancel a stop in Belize when protests broke out ahead of their arrival.

The protests, led by indigenous people, some holding signs against colonialism, prompted the couple change their initial plans and visit another local cocoa farm instead of the one they originally planned to tour in the foothills of the Maya Mountains.

Elsewhere that week, when the couple arrived in Jamaica, protesters gathered in the capital city of Kingston to protest the visit.

A group known as the Advocates Network also published an open letter protesting the royals' visit to the Caribbean nations that make up the British Commonwealth, saying that British rule had over the years "perpetuated the greatest human rights tragedy in the history of humankind," the enslavement of African people in the region.

As monarch, Elizabeth is the head of the British Commonwealth, which represents 54 nations, including Belize, Jamaica and the Bahamas, which William and Kate also visited.

The Caribbean nation of Barbados parted ways with the Commonwealth in late 2021, officially becoming a republic and cutting ties with the queen.

In his speech Wednesday, William recognized what is known as the Windrush Scandal, when Caribbean immigrants in the U.K. were incorrectly targeted by immigration enforcement for deportation.

"Only a matter of years ago, tens of thousands of that generation were profoundly wronged by the Windrush Scandal," William said. "That rightly reverberates throughout the Caribbean community here in the U.K. as well as many in the Caribbean nations."

"Therefore, alongside celebrating the diverse fabric of our families, our communities and our society as a whole -- something the Windrush Generation has contributed so much to -- it is also important to acknowledge the ways in which the future they sought and deserved has yet to come to pass," he continued. "Diversity is what makes us strong, and it is what reflects the modern, outward-looking values that are so important to our country."

In addition to their stop at the National Windrush Monument, William and Kate spent time on Wednesday with younger members of the British-Caribbean community. 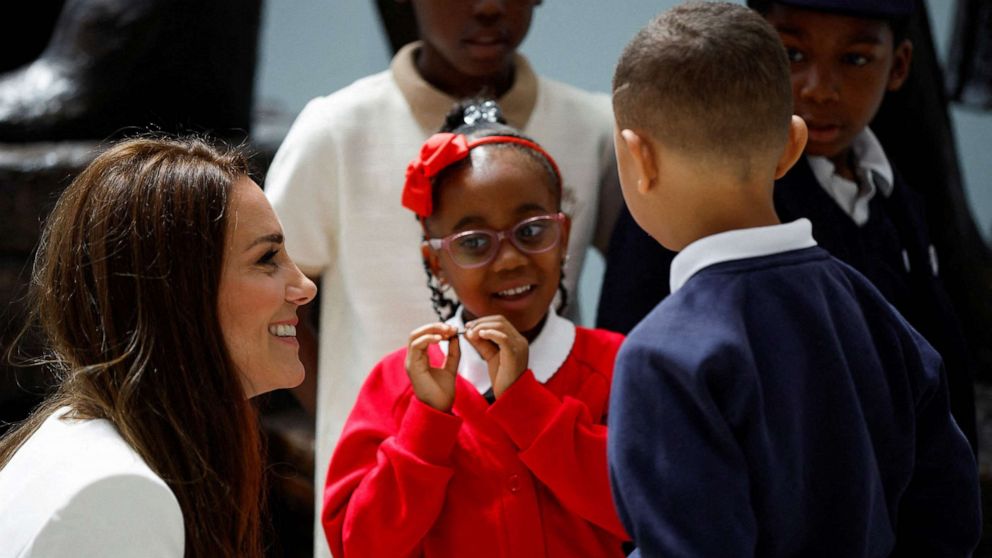 John Sibley/POOL/AFP via Getty Images
Catherine, Duchess of Cambridge, speaks to children as they attend the unveiling of the National Windrush Monument at Waterloo Station in London, June 22, 2022. 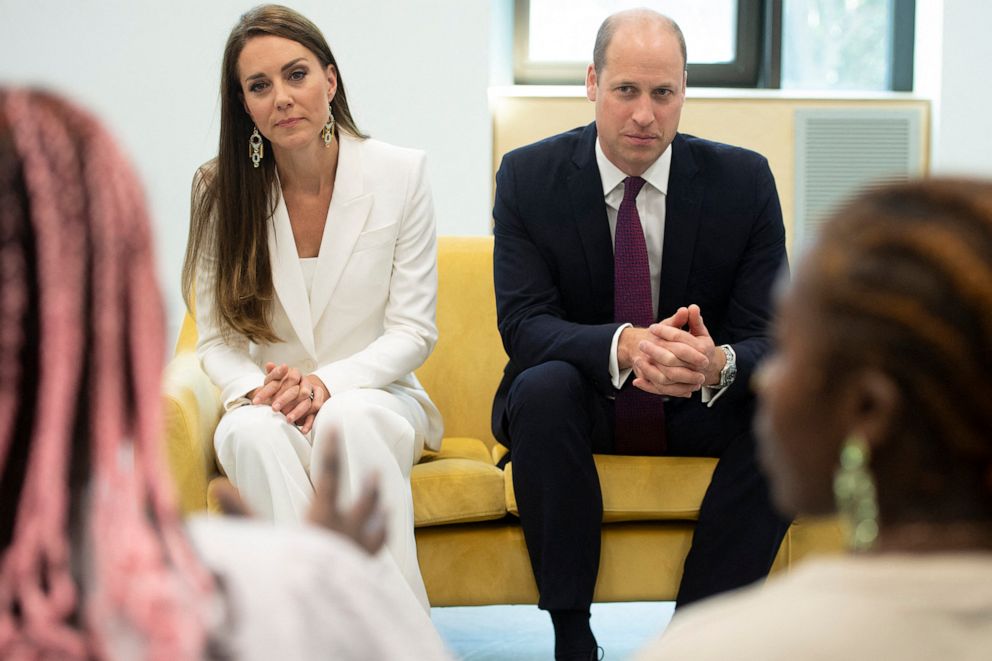 Eddie Mulholland/POOL/AFP via Getty Images
Catherine, Duchess of Cambridge and Prince William, Duke of Cambridge, meet with members of the association ELEVATE, which focus on the creative and cultural sector for the young ones, at Brixton House, in London, June 22, 2022. 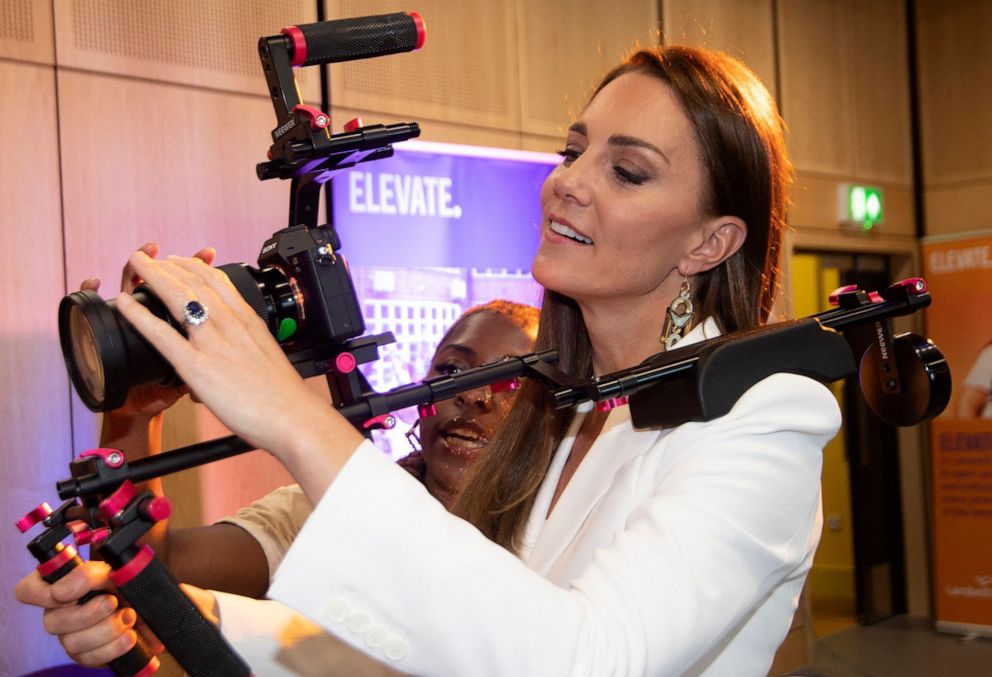 Eddie Mulholland/POOL/AFP via Getty Images
Catherine, Duchess of Cambridge uses a camera as she meets with members of the association ELEVATE, which focus on the creative and cultural sector for the young ones, at Brixton House, in London, June 22, 2022.

The couple visited the Brixton House in South London and met with children taking part in Elevate, an initiative to "connect young people with creativity," according to its website.