Sylvester Stallone and Arnold Schwarzenegger are getting into the Halloween spirit.

In an Instagram post on Tuesday, the two Hollywood legends each shared a photo of the two of them carving pumpkins… with survival knives.

"Myself and my great friend Arnold," "Rambo" star Stallone wrote in his caption. "Spending time at his amazing office Carving Pumpkin Heads for Halloween with Survival Knives !!! That's what real ACTION guys do with their free time! Lol…"

The two action stars once had a rivalry in the '80s, the golden age of action movies. Schwarzenegger addressed their feud in 2017 at Beyond Fest in Los Angeles.

"We were attacking each other in the press relentlessly," Schwarzenegger said. "We called each other names and called out our weak points, and it was so competitive. It became so silly that all of a sudden it became a competition about who has the most muscular body. So I said, 'Sly, forget about that now. Because there's only one seven-time Mr. Olympia, and it's me!'"

"But then he had to use bigger weapons," the body builder and actor added. "So then it was a competition of who had the biggest gun, and then who uses the biggest knife. Do you remember the Rambo knife became so big it was like a sword? No one has a knife like that! But Stallone had one built, so I had to come in with a bigger one."

The actors, who have starred in "The Expendables" films and "Escape Plan" together, have become good friends. And the squabbles they have today are all in good fun. 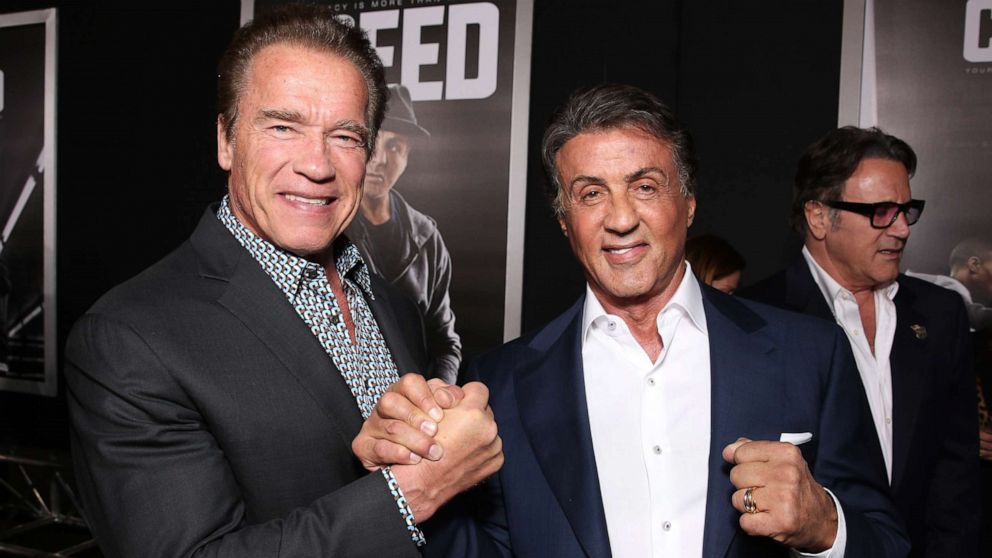 In 2019, when Schwarzenegger told Jimmy Kimmel that he tricked Stallone into starring in the 1992 film, "Stop! Or My Mom Will Shoot," which didn't do well in theaters at the time. Stallone responded on Twitter.

"Does it bother me? Nah. Is it burnt into my memory like a horrible scar? Nah. Well, maybe just a little bit," Stallone said. "I've decided to write a sequel for you, called 'Stop or Your Grandmother Will Beat Your Ass.' I will be directing, and producing and mocking it all the way through."

He ended his message and said, "Keep punching, big guy."