Newborns Luka Luo Arison and Emilia Luo Arison are siblings who arrived in the world nine days and more than 300 miles apart earlier this month.

The babies share the same biological mother, were birthed by two different surrogate women and share two dads who spent nearly three years bringing them into the world.

"We look at each other all the time and say, 'We can’t believe we did it,'" one of Luka and Emilia's dads, George Arison, told "Good Morning America," referring to their other dad, his husband, Dr. Robert Luo. "It’s incredible."

Arison, the 41-year-old co-founder of Shift, an online car selling platform, and Luo, a 40-year-old pathologist, wed in March, a marriage documented by the New York Times.

Their journey to having children together began much earlier, in 2015, when they met in San Francisco and fell in love. Soon after, they began planning how they would start a family together. 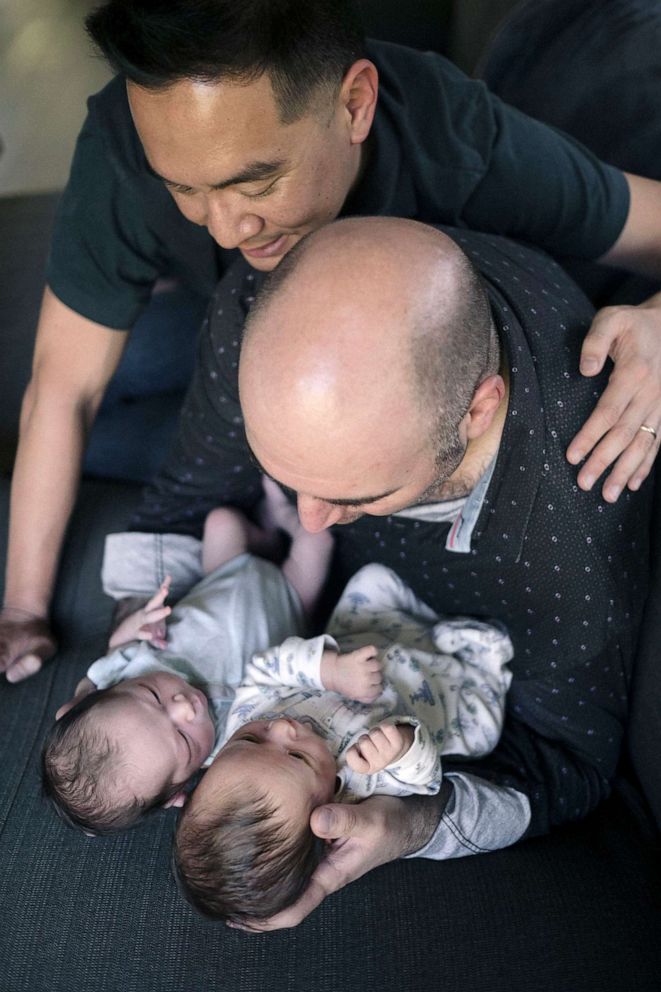 The couple knew they wanted their children to be related to each other and were hopeful they could each have a genetic link to the children also. As two gay men, they saw the reality that it would be a winding road to parenthood, adoption included, and decided to look into surrogacy.

(MORE: 61-year-old grandmother carries a baby for her son and his husband)

Arison and Luo also knew they would need a woman to help them, which turned into three women.

They chose their egg donor -- a woman who will remain anonymous until much later if both the woman and Luka and Emilia want to meet -- and fertilized one egg with Arison's sperm and one with Luo's sperm.

They then settled in for the search for two surrogates, which proved to be a months-long process. Arison and Luo needed two surrogates because their fertility clinic would only implant one embryo in a surrogate at a time, a standard practice to reduce the risk of complications.

The couple also wanted to ideally find surrogates close to their lives in San Francisco so they could maintain close ties during the pregnancies.

They ended up finding, with the help of an agency, two women willing to carry their babies who both lived in northern California but more than 300 miles apart. 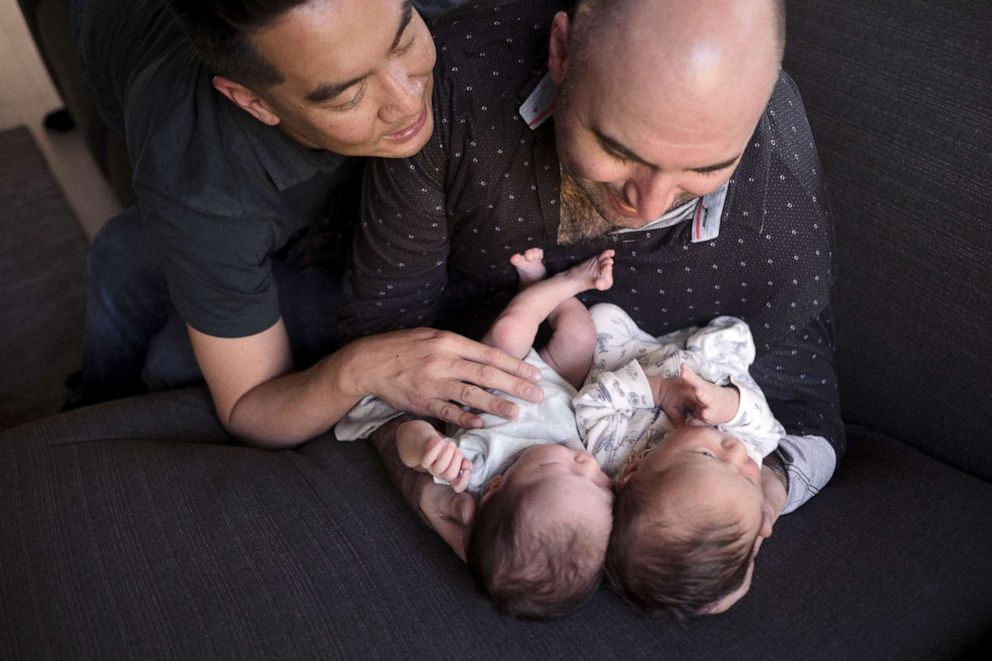 Late last year, the two women met each other and Luo and Arison for the first time when they came together in San Francisco for the embryo transfers.

"They don't know this but, from the lab, when they came in, we were able to see [Luo and Arison] giving gifts to the women and hugging the women," said Dr. Peter Klatsky, the couple's fertility doctor and director of fertility preservation at Spring Fertility. "It was a really meaningful and special day for all involved."

In what Arison described as an "unexpected" but very welcome outcome, the embryo transfers in each women were successful that day. Luo and Arison spent the next nine months looking after their two pregnancies.

"Robert attended nearly every ultrasound the surrogates had," said Arison, whose company, Shift, is a startup. "I joke that I started a company and Robert started another company, our children."

The couple also recorded themselves reading children's books throughout the pregnancies and sent the recordings to each surrogate to play for their children. Arison recorded some of the books in his native Georgian language. 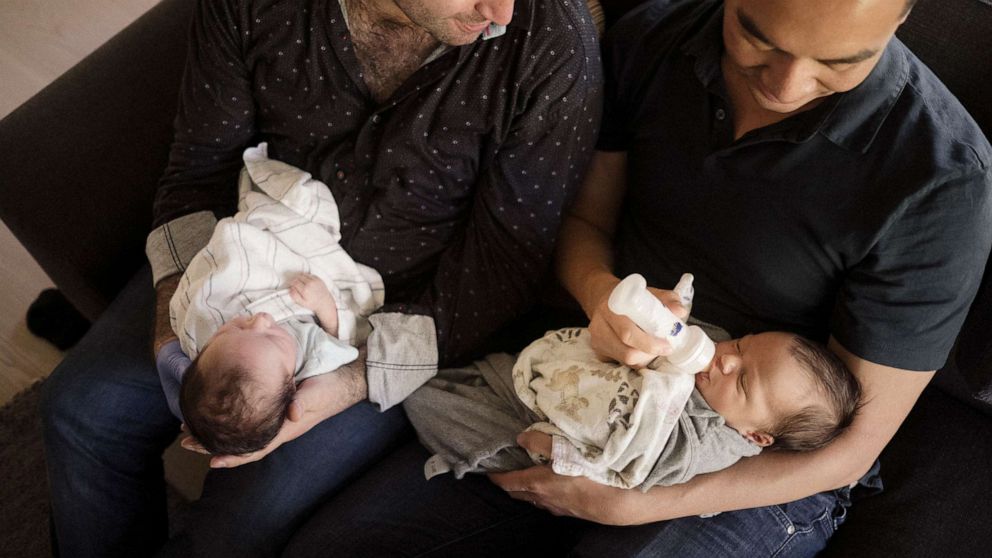 One of the books they read aloud, "And Tango Makes Three," is one they plan to keep reading to their kids as they grow. The book tells the true story of two penguins at the Central Park Zoo who create a nontraditional family with the help of others.

"We're going to tell [Luka and Emilia] there were very nice women who were willing to carry [you] in her tummy," Arison said. "We’ll never be able to say enough thank yous to our surrogates."

The surrogate carrying Luka went into labor earlier this month. On Sept. 2 she gave birth to him, a healthy 9 pounds, 4 ounces boy.

Luo and Arison were there for the delivery and as they celebrated the birth of their first child, got word the surrogate carrying Emilia was having contractions.

They rushed to her hometown and after a few days of agonizing waiting -- leaving Luka behind with his surrogate -- Emilia was born on Sept. 11, weighing 7 pounds, 11 ounces.

Luo was even able to scrub in and help with the delivery of Emilia, according to Arison. 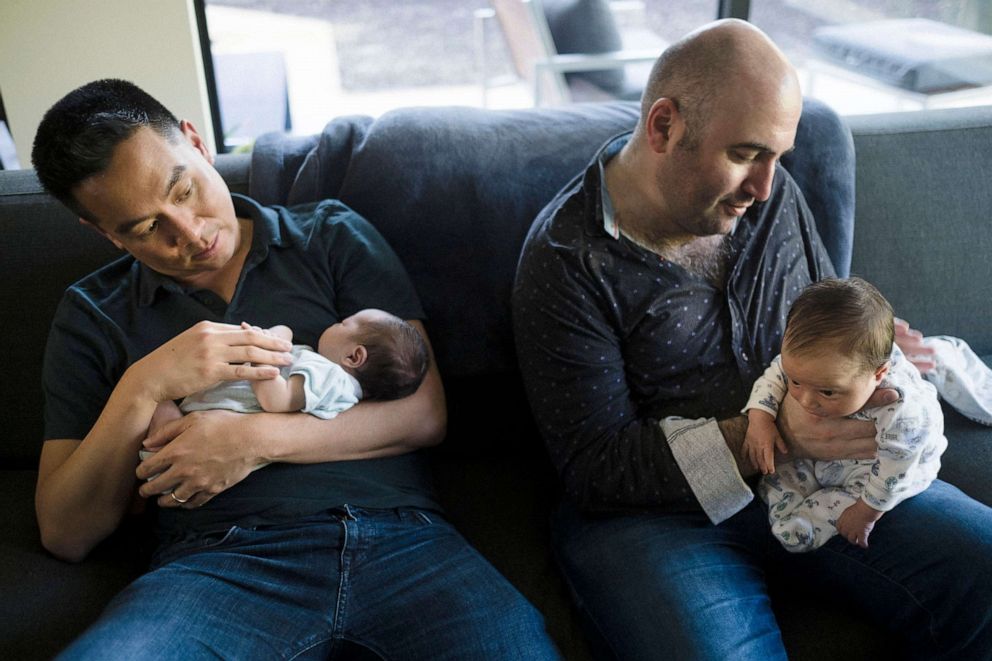 The new dads are now home with both babies in San Francisco, relishing in the fact that their dreams of becoming parents came true.

Arison said he does not take for granted the fact that he and Luo live in California, a state where surrogacy is legal and where the two dads saw their names placed on their kids' birth certificates immediately without a legal fight.

"The fact that we can do this makes me feel really good about the world we live in," Arison said. "We are massively relieved and grateful."