This is the story of Robert Hurley and Amy Krusemark. Hurley is about to graduate as the valedictorian of his class, and is deciding between Yale and Stanford -- he's received a full-ride offer to both.

Rewind about three years. Amy knew Robert as her "very quiet, withdrawn" student in the freshman year geometry class she was teaching at Boca Ciega High School in Gulfport, Florida.

But one day, she found out Robert had been living in a group home.

"The state doesn't want kids in group homes for long periods of time, so they were going to force me to move somewhere else," he said. "The only people they could find to take me in were very far from my high school. I didn't want to start over again for the third of fourth time."

Hurley had been in foster care since he was 9 years old. He was removed from his mother's home because she was dealing drugs. Despite that, he always knew his mother loved him very much.

In his college essay, Robert described the family he came from -- his mother dealing drugs, his father a drug addict. Despite that, Hurley wrote, "I always knew my siblings and I were the most precious part of my mother's life."

Despite her struggles, "mom still found time to take us to Sim's Park, watch SpongeBob, or play Monopoly with us," he wrote. "When I had growing pains, she sang Elvis songs while massaging my aching legs. Her love was obvious."

Get our full coverage to head back to school like a boss and own the school year.

However, in 2014, Robert was moved to a group home by Child Protective Services. "[My] mother couldn't juggle motherhood and drug dealing," he wrote.

Once he went to live in the group home, Hurley wrote that he "built a new family."

"The first member was Gene, the guardian ad litem assigned by CPS. He would visit the group home every month, never missing a holiday or celebration. In 2016 when a drunk driver killed my older brother, Gene gave me strength and comfort," he wrote in his essay. 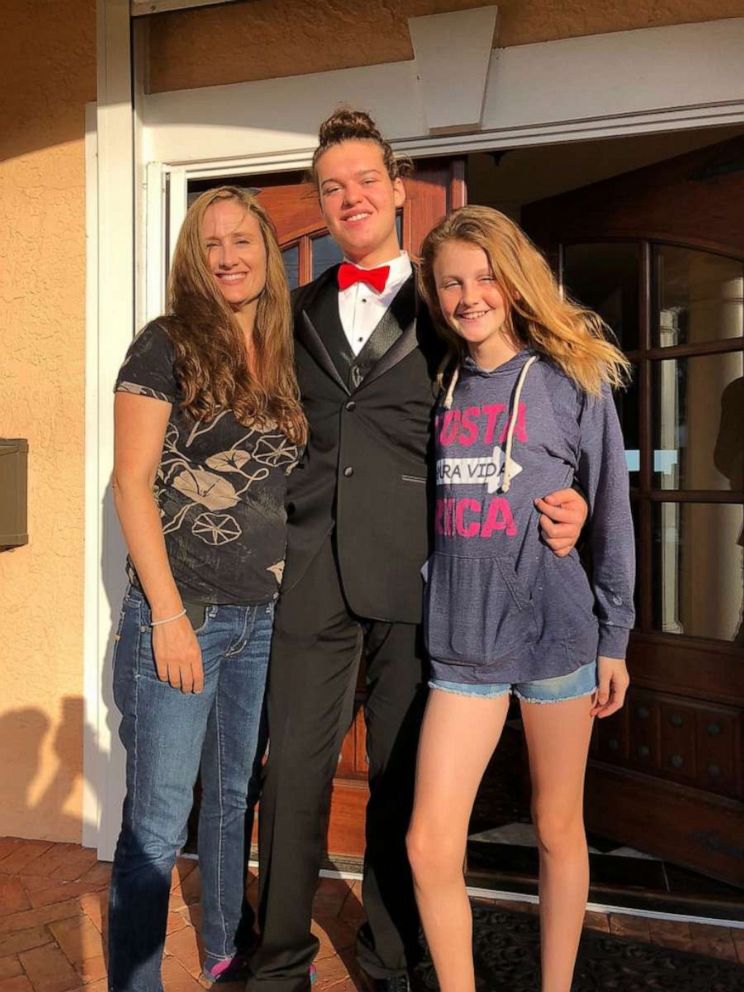 Amy Krusemark
Robert Hurley heads off to the prom.

"The next addition to my family was Gianna, the manager of the group home. She made each birthday an unforgettable event with presents, decorations, and singing. One year I had bacon-wrapped meatloaf and a banana upside down cake. My every birthday wish was granted."

After finding out he found out that he was no longer able to stay in the group home, Hurley told "GMA" that his teacher, Amy Krusemark "saved me so I didn't have to start again."

At first, he said, it was "a little weird" to move in with a teacher from his school. But it eventually got easier.

He wrote in his college essay, "The woman I once knew as just a quirky geometry teacher, became like a mother to me. She taught me how to drive a stick-shift and rode white-knuckled to school each day until I got the hang of it. "

Krusemark told "GMA" she had a history of foster parenting and felt comfortable stepping up for Robert. She shares custody of her daughter with her ex-husband and she and her boyfriend live with Robert. "We're really a regular family," she said. "Vacations, card games, sibling rivalry -- all of it."

As it turns out, being a valedictorian is a family affair. Krusemark, her mother and her two brothers all share the honor.

Hurley, she said, "went beyond expectations. He told me early on he wanted to go to an amazing school. I asked him 'do you know what that takes?' and every day he just started chiseling away at the goal."

With graduation fast approaching, Hurley said he grateful to Krusemark. He's nervous about the future, but excited to be on his own.

"I can't take wait to take the world into my own hands," he told "GMA." "I've been dependent on other people my whole life, I can't wait to be independent."