Zibby Owens is the host of the award-winning, daily podcast Moms Don't Have Time to Read Books. She's also an author herself (Bookends, Princess Charming) and the founder of Zibby Media which includes a publishing company Zibby Books, a podcast network Zibby Audio, an online magazine, and a community with retreats and more. Follow her @zibbyowens.

We made it. Thanksgiving is over. We all survived! Family dramas, fights over which movie to watch, mealtime quarrels, loneliness, stressful travel and food, food, food: It's all behind us. Now we can look forward to the craziness of the December holidays: Hanukkah (late this year!), Kwanzaa and Christmas, all threaded together to make for a heavy quilt to end the year. 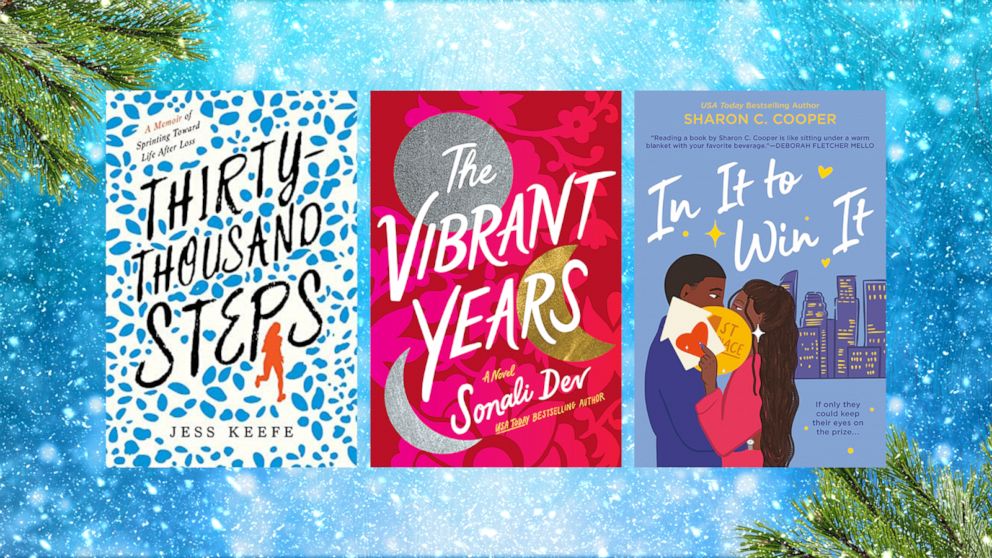 Here are the latest releases this December to end a fabulous year of fiction, nonfiction, poetry and more. I even included my book of the year pick! Cheers to all the authors who have contributed to the 2022 annals of literature (including, dare I say, me for "Bookends" and "Princess Charming"!!).

Dive in. Get cozy. And enjoy the stories.

"Thirty-Thousand Steps: A Memoir of Sprinting Toward Life After Loss" by Jess Keefe

A debut memoir by Jess Keefe, "Thirty-Thousand Steps" is a searing, emotional and powerful look at the love between siblings and the disastrous effect drugs can have on a family. After Jess' younger brother overdoses, she decides to train for a half-marathon to put her grief somewhere, but her own demons get in the way. An exploration of everything from religion and sexuality to physical fitness and grief, this redemptive tale is a must-read.

"The Ingenue: A Novel" by Rachel Kapelke-Dale

In this captivating, haunting tale, a young woman -- a former piano prodigy -- returns to her family's storied, eerily quiet castle-like home in Milwaukee after her mother's unexpected death where chilling events unfold, as told by Paris-based author Rachel Kapelke-Dale, author of "The Ballerinas."

MORE: 'The Light Pirate' by Lily Brooks-Dalton is our 'GMA' Book Club pick for December

"The Vibrant Years" by Sonali Dev

USA Today bestselling author Sonali Dev returns, this time shepherded by actor and Amazon imprint Mindy's Studio founder Mindy Kaling, to tell a three-generation family story about reinvention, dating, and overcoming secrets. When Bindu Desai inherits a million dollars, she spends it on a new home in a "posh retirement community" in Florida while her daughter-in-law Aly finds her footing and Aly's daughter tries to save her career. (You can watch Sonali Dev and me when we were interviewed on GMA in February 2021.)

"Screaming on the Inside: The Unsustainability of Modern Motherhood" by Jessica Grose

New York Times reporter Jessica Grose didn't just have a little morning sickness when she was pregnant with her first child. No, she was violently ill. So ill that she had to quit her job; she couldn't go more than a few minutes without vomiting. This and other anecdotes from mothers working both inside and outside the home show the lack of system-wide support for mothers in America. Jessica's reporting mixed with her own story of motherhood make an incredibly strong case for changes to help mothers parent.

"The Bird Tattoo" by Dunya Mikhail

The National Book Award-nominee Dunya Mikhail writes a sweeping tale set over two decades in Iran in "The Bird Tattoo," starting with a woman who frees a bird only to have the bird's owner return, angry -- and then they eventually get married. When Elias, a fellow villager, disappears years later, it sets into motion many fractured relationships in their community and the search for identity in later life.

"The Book of Everlasting Things" by Aanchal Malhorta

A love story about a perfumer starting in 1938, set against the backdrop of Indian independence, "The Book of Everlasting Things" is like a modern-day "Romeo and Juliet." A man and woman in love end up on opposite sides of the Indian and Pakistan split in this tale of countries and countrymen -- and the lengths we'll all go for love.

"Roses in the Mouth of a Lion" by Busha Rehman

A queer coming-of-age novel about friendship, love, and loyalty set in 1980s Queens, Roses in the Mouth of a Lion masterfully depicts the complicated and rich relationships among young women – and the lines that are crossed to follow true passion.

"No One Left to Come Looking for You" by Sam Lipsyte

A New Jersey rock musician in the early 1990s copes with his bandmate disappearing before a concert along with his special bass, which uncovers citywide corruption in this suspenseful read.

Pulitzer Prize-winning author Cormac McCarthy's second book in "The Passenger" series features a young woman grappling to understand her time at a psychiatric institution starting in 1972. Diagnosed with paranoid schizophrenia, her "sessions" become the basis of this innovative novel about siblings, delusions and the search for meaning.

"Pets of Park Avenue: Paws in the City" by Stefanie London

A light-hearted romance set in New York City, "Pets of Park Avenue" follows Scout, a talent agency employee who thinks she has it all together, but has to reckon with her "not quite ex" to solve a crisis of the pup-front.

"In it To Win It" by Sharon C. Cooper

USA Today bestselling romance author Sharon C. Cooper writes about two entrepreneurs competing for a property that could change their lives. Morgan Redford is trying to find a home for foster children aging out of the system while real estate developer Drake Faulkner is determined to snatch it from his ex. They both need to participate in an Ironman competition to win the property in this story about what it means to really win.

And here is my book pick of the year to read this December:

"A Place Called Home: A Memoir" by David Ambroz

I read this entire memoir in a day. "A Place Called Home" is one of the best books I've ever read. David and his two siblings were raised homeless by their mentally ill, abusive mother before being sent to a series of foster care placements. The horrors David endured, including the many people in authority determined to change his homosexuality, were unspeakably awful. And yet, he never lost hope. His spirit of forgiveness, his intelligence and his endless capacity for optimism and love got him through the worst of times -- and to his life now as a California-based foster father, a homeowner and a changemaker who was heralded by President Barack Obama.

This is the perfect December read: a story for all of us to really confront the systemic issues in the country and to come face-to-face with our own roles in childhood poverty even if it's simply thinking that it isn't our problem. David, a true mensch, shared his story, so expertly written, to help the millions still in poverty -- and so must we.

This is the power of literature at its very best.