Forget tacking a "Lost Pet" flyer on your neighborhood lamppost. A New Jersey pizzeria has re-imagined how to help reunite lost animals with their owners.

John Sanfratello, owner of Angelo's Pizza in Matawan, New Jersey, came up with the idea to attach missing animal flyers to the top of their pizza delivery boxes to help make a difference in the community.

"Growing up, we used to have missing children on milk cartons," Sanfratello told "Good Morning America." "Why can't the pizza box be the milk carton of today, but for animals?" 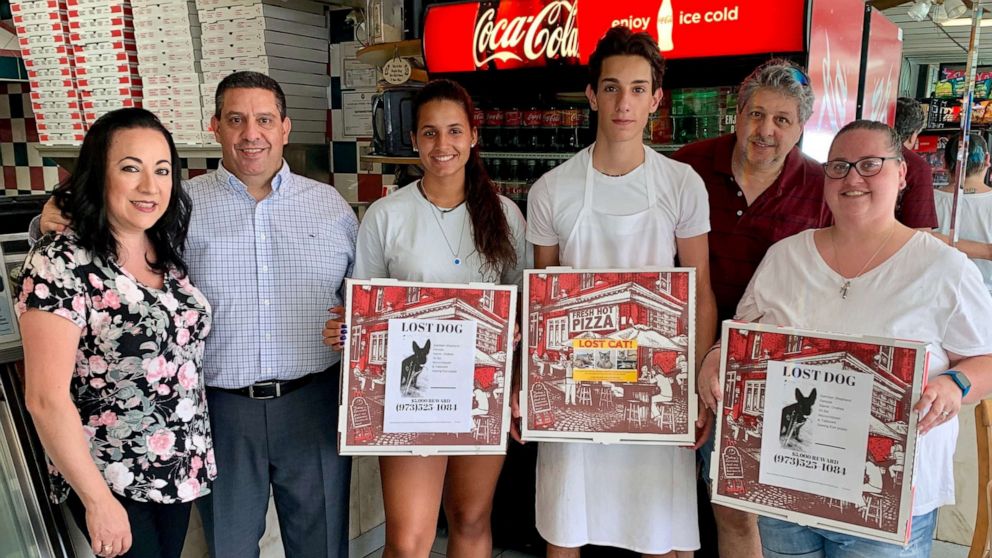 The idea was inspired by a flyer Sanfratello saw for a lost cat. He thought the cat, named Hazel, resembled his family's 12-year-old feline, Max, who once went missing for nearly a week.

The similarities tugged on his heartstrings, prompting Sanfratello to post a call out on Angelo's Pizza's Facebook on July 11 to all pet owners, offering help to try to find their missing pets.

The post was shared more than 1,500 times, prompting hundreds of comments.

"We don't care if owners are customers or not, I'm concerned about how we can help," Sanfratello said. "This is a small gesture on our part, but [pets] are family members after all."

One inquiry came in from a seeing guide dog organization, asking for the pizzeria's help to find a very special four-legged friend. A German Shepherd puppy named Ondrea went missing from The Seeing Eye, a guide dog school located in Morristown, New Jersey, about three and a half weeks ago. Ondrea was about to begin formal training to assume the role as a seeing eye dog for the blind, Peggy Gibbon, the director of canine development, explained to "GMA." 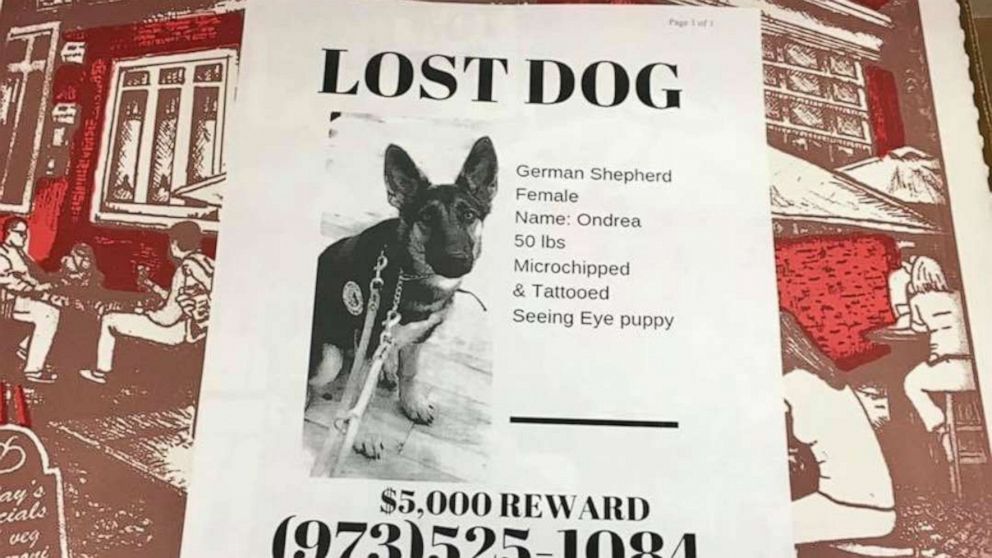 "We have a lot of volunteers helping spread the word," Gibbon said about their efforts to find Ondrea. "One of our volunteers lives in the area of Angelo's Pizza and contacted them. … It's a very innovative idea, helping to spread the word to a new group of people."

Since Sanfratello's post last week, three pets have been featured on pizza boxes so far -- a Maltese named Cici, a cat named Opu and Ondrea. 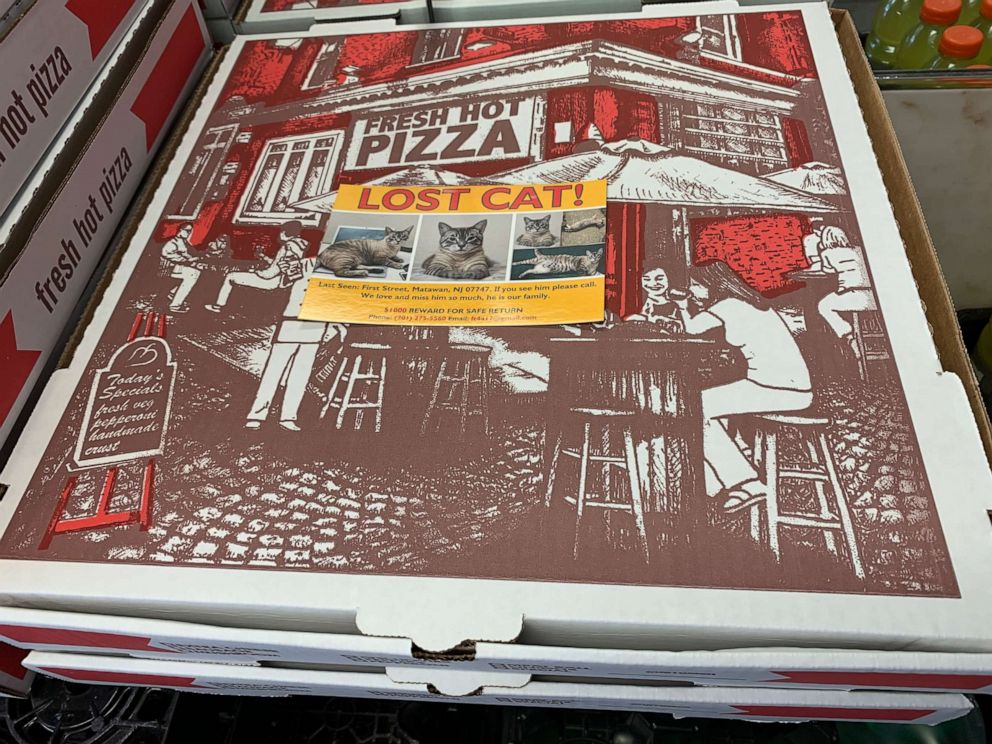 The Sanfratellos are also rallying their large Italian family behind cause. Sanfratello's sister, Rosalia Di Fede, followed suit by sharing a similar Facebook post and plans to reunite lost pets with their owners through her restaurant, La Forchetta in Stuart, Florida. Di Fede told "GMA" that a kitten, who's been missing since January, was featured in flyers that went out on 80 boxes in one day alone. 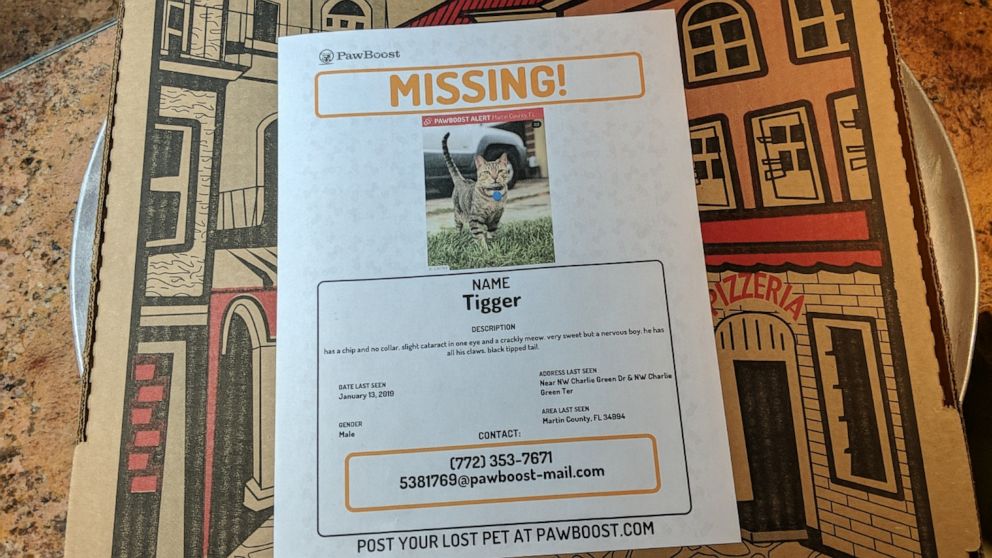 Angelo's Pizza
Rosalia Di Fede is also helping to reunite lost pets with their owners through her restaurant, La Forchetta in Stuart, Florida.

Their cousins, who own the Little Cupcake Bakeshop, three bakeries in New York, have agreed to help join the efforts in New York on their to-go packaging as well.

With a pie, a cardboard box, a flyer, tape and a whole lot of love, Angelo's Pizza hopes it will make a difference for members of the community and the fur babies they love.

"We need to find as many pets as we can," Sanfratello said. "And we need to raise awareness, so that hopefully more businesses become involved on a local level."