By the end of International Women's Day this year, a Twitter account that sent out hundreds of tweets calling out companies for their gender pay gap had gone viral.

The Twitter account, @PayGapApp, is the brainchild of Francesca Lawson and her partner, Ali Fensome, of Manchester, England, who said they wanted to see companies pay up, literally, to the women they were celebrating.

"It came from a place of frustration of seeing all these lovely messages of empowerment and celebration and inspiration, but without actually knowing whether they were true or not," Lawson, a 27-year-old copywriter and social media manager, told "Good Morning America." "If companies are so keen to promote themselves as celebrating women and equality, then that really needs to come through in their actions as well."

Lawson and Fensome, a software developer, built their pay gap bot using public data thanks to a pay transparency law in place in the United Kingdom since 2017. The U.K. government requires that companies with over 250 employees submit annual reports on their gender pay gaps based on payroll data.

Fensome said the fact that tweets from the @PayGapApp went viral, shows that people want more transparency when it comes to pay. 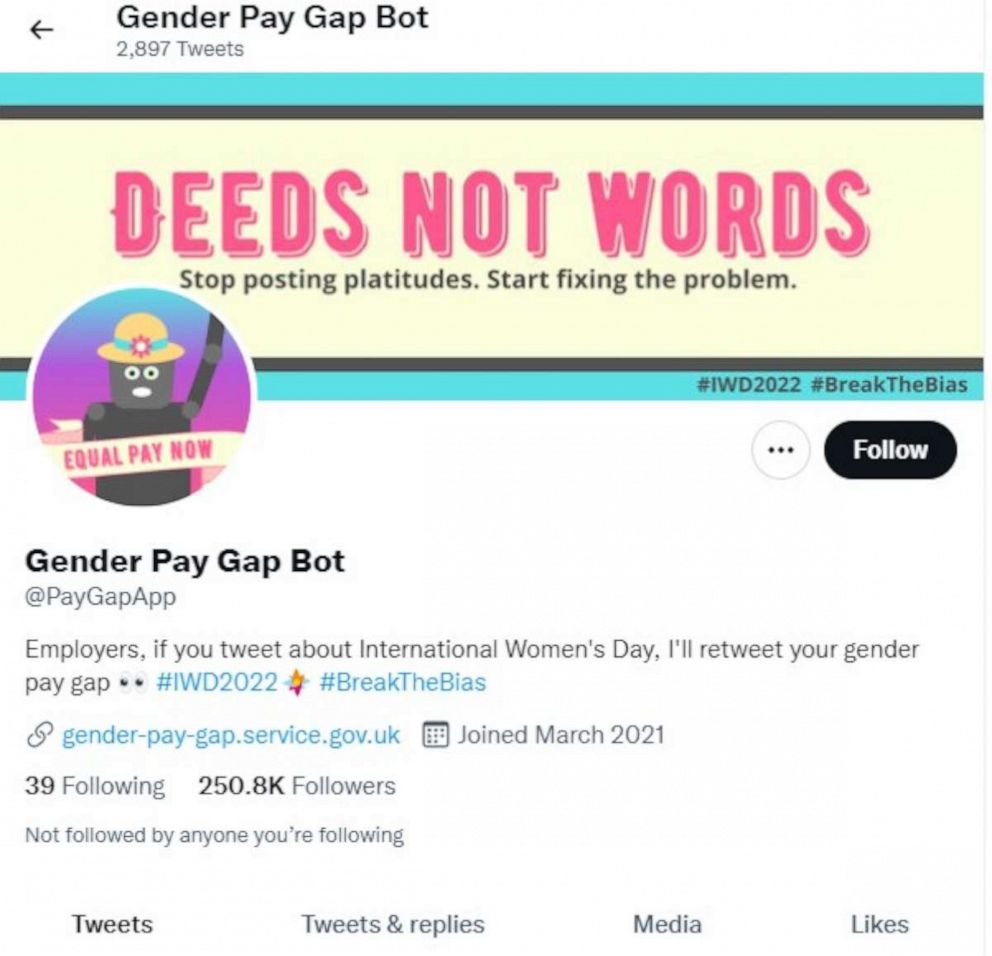 "It shows that there's such a demand for data, for transparency, for accountability," Fensome, adding that she hopes other similar efforts are started around the world, told "GMA." "What we want is for the data to make a difference, and the way that's going to happen is if it stays in the public eye and people maintain pressure." 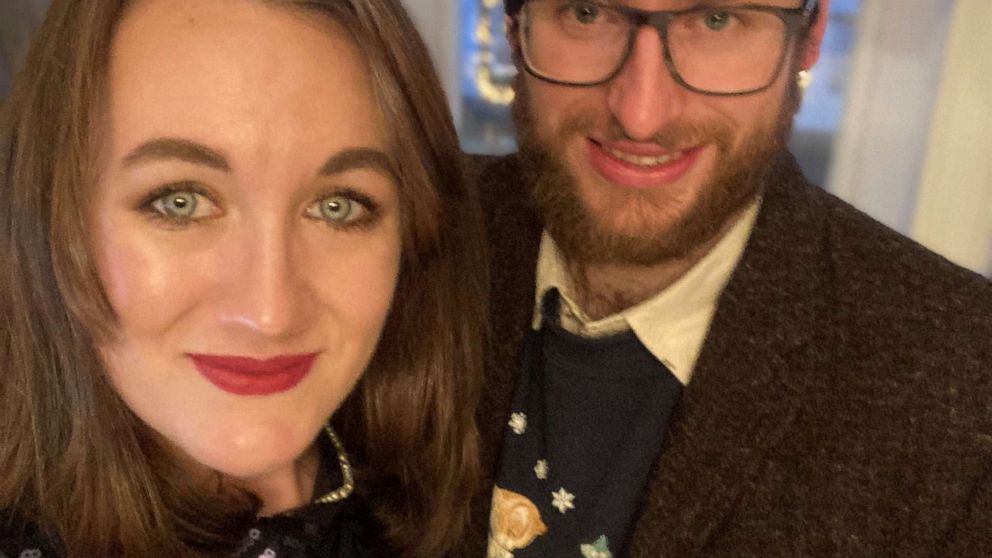 There is no such federal law in the United States calling for pay transparency from companies, although a growing number of cities and states have enacted regulations.

As the country marks Equal Pay Day and as women remain far behind in the workforce amid the coronavirus pandemic, pay transparency is being called upon as a leading solution to close the gender pay gap.

More than 1 million women left the workforce during the pandemic, and working women still lag behind in job recovery, according to data from the National Women's Law Center (NWLC), a policy organization that fights for gender justice.

"One of the problems with challenging pay discrimination right now is that it is really easy to be paid less than your male counterpart for years and have no idea that that is the case because most employers keep pay secret," said Emily Martin, vice president for education and workplace justice at the NWLC. "What pay transparency means, fundamentally, is dismantling the secrecy of pay."

On average, women working full time, year-round are paid 83 cents for every dollar paid to men, according to the NWLC. That makes Equal Pay Day, March 15, the day that women had to work into 2022 to make what white, non-Hispanic men earned in 2020 alone.

When Victoria Walker, a freelance travel reporter, quit her New York City-based job in February as a writer for a travel website, she said she wanted to make sure the person coming in after her made what they deserved.

Because her job salary was not listed publicly, Walker, 29, tweeted her salary advice when she announced her job move on Twitter.

"Before I forget -- if you apply for my old job as Senior Travel Reporter, you should ask for no less than 115k, a signing bonus & a relocation bonus if you're moving to NYC," she wrote in a tweet that went viral. "In full transparency, I was at 107k."

Oh! Before I forget -- if you apply for my old job as Senior Travel Reporter, you should ask for no less than 115k, a signing bonus &a relocation bonus if you're moving to NYC. In full transparency, I was at 107k. I believe being transparent is one way to achieve equity in media.

Walker said she sent the tweet in hopes that people who applied for the job would not "inadvertently lowball themselves" when it came to their pay. She said she was really surprised by the viral response to the tweet.

"A lot of people who weren’t even applying for the job were like, "Wait, this is what travel reporters can make," said Walker. "They told me they found they’ve been underpaid and undervalued, and a lot of people didn’t know about signing bonuses and relocations." 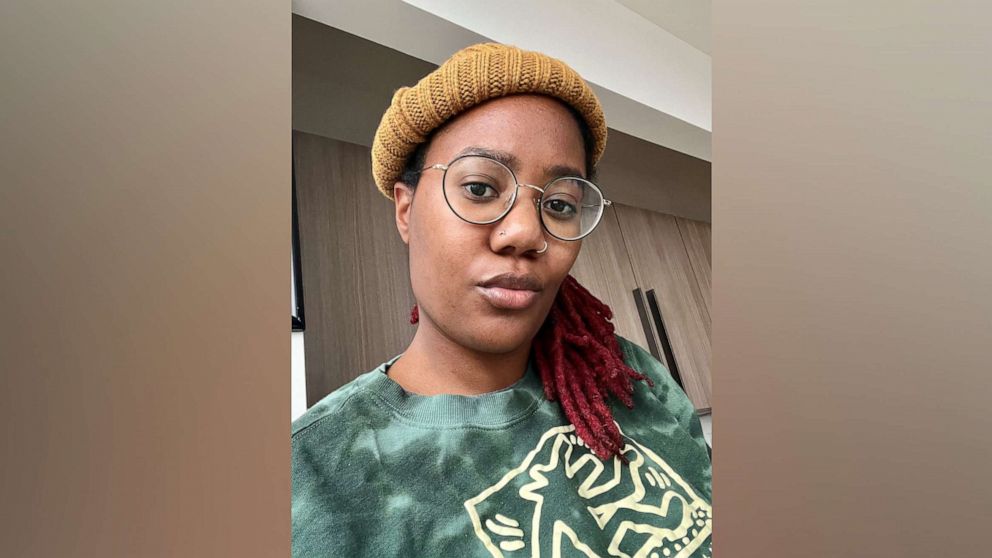 Starting in May in New York City, employers, like Walker's former company, will be required to include a minimum and maximum salary with job listings under a bill passed in December by the New York City Council.

At least eight states, including Colorado, California, Maryland, Washington and Nevada, and cities already have laws in place that implement some degree of pay transparency, according to Martin.

"The laws vary from state to state, but they all are building on that idea of the importance of giving people who are applying for jobs more transparency, more information about the salary for the job," said Martin. "And sort of shifting the power dynamics around who controls that information in a way that they can really make a difference."

Many of the state laws already in effect also have another bonus for women in that they prohibit employers from setting a person's salary based on their salary in their previous job, according to Martin.

"Those salary history prohibitions are important for ensuring that pay discrimination doesn't follow someone from job to job through their career," she said. "When you put these things together, it has the effect of giving the job applicant more power over information and ensuring that the employer doesn't hold all the cards."

Because pay transparency laws have been in effect in various states, enough real-world data exists to show that it makes a difference in lowering the wage gap, according to Martin. Public sector employees, like at federal agencies, have also for decades been following a formal grade and steps system that makes salary ranges and information public.

One 2019 study from PayScale, a compensation data and software firm, found that among companies whose female employees described a transparent pay process, women were estimated to earn between $1 and $1.01 for every dollar earned by men.

Tips for women when asking for pay

Katie Donovan, a pay equity expert, has been leading the fight for equal pay for women since 2011, when, while out to dinner, a friend revealed she was being paid $30,000 less than a male colleague whom she had trained.

Donovan, the founder of Equal Pay Negotiations, a pay equality consultancy, said she immediately thought of being underpaid as a woman herself and remembers thinking at the time, "I don't want my nieces 20 years from now having the same, exact conversation."

MORE: 5 things men can do to close the gender pay gap

Donovan went on to lead the movement to ban employers from asking about salary history in job interviews. She said she sees the next fight in the equal pay battle as making sure that companies offer salaries that are not the median, which incorporates women's already low pay, but above, which incorporates what white men are getting paid.

"If we really want to finally get a chance of achieving closing the pay gaps, we need to start with changing the data we've looked at," she said. "If we're aiming for the median of everyone, it's mathematically less than the median of white men."

Here are four tips for women from Donovan and Martin.

1. Do your research on salaries beforehand: "In part because of the internet and in part because of these policy changes, we are living in a moment where you can find more information about pay in particular roles and particular companies than you could 10 or 15 years ago, and that is a source of power for workers," said Martin.

"It always of course is a good idea to do your research in these situations and to learn as much as you can about what is publicly available or what the law requires an employer to provide in terms of pay information," she said.

2. Be comfortable asking about salary: "There's a little bit of culture shift happening with employers where there is more of an understanding that posting a salary range is a good equity practice, so we're seeing more employers do it even where the law doesn't require it," Martin said. "That in turn means that it is a more reasonable question for job applicants to ask of employers, even if employer hasn't posted it, to ask whether that information is available."

3. In most cases, you're protected against giving your salary history: "Under the Federal Equal Pay Act, a lot of courts have held that salary history isn't legal justification for paying a woman less than a man in the same role, so you do actually have some protection against pay discrimination based on salary history," Martin said.

"That's one reason why if I were in that position, I would try to gently deflect an interviewer by saying something like, 'It sounds like what you really want to understand is the salary that I'm looking for in this job, and this is what it is,'" she said. "And hopefully that is informed by some data that you've been able to find in the world through sites like Glassdoor and the like about what the market rate is for the position."

4. Ask for more than the median salary range: "As a candidate, when you're given a job offer, you say, 'I'm not accepting median. That's low,'" said Donovan. "You aim for 75 percentile or higher, because that’s where the white guys are hanging."