March 24 marks Equal Pay Day for women, the day that women have to work into 2021 to make what white, non-Hispanic men earned in 2020 alone.

On average, women working full time, year-round are paid 82 cents for every dollar paid to men, according to the National Women's Law Center, a policy-focused organization that fights for gender justice.

The impact of the gender wage gap has been seen firsthand over the past year as the recession caused by the coronavirus pandemic put more than 2 million women out of the workforce, many of them on shakier financial footing than their male counterparts because of the gap, experts say.

"As the pandemic has disproportionally forced so many women, especially women of color, out of the workforce, this year's Equal Pay Day not only underscores pay discrimination, it also sheds light on the fact that our freedom to earn and claim financial independence, as women, is in shambles," said Farnoosh Torabi, a personal finance expert and host of the "So Money" podcast. "The problem is much bigger than pay disparity. Just being able to work and earn a living is in jeopardy." 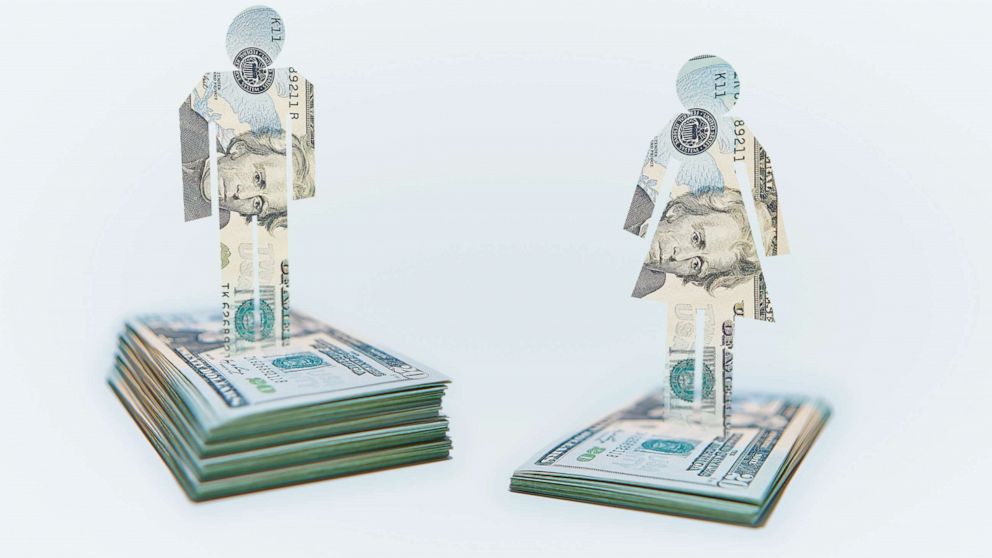 STOCK PHOTO/Getty Images
A male and a female figure is seen on a pile of money in this stock photo.

While Equal Pay Day is a day that women know all too well, it is not about women. Men also need to be part of the discussion and the solution, according to Torabi, also a contributing editor at NextAdvisor.com.

MORE: What to know about the gender wage gap

"Equal Pay Day is not just a day for women to come together and share their ideas for the change we deserve," she said. "It is an opportunity for men and everybody else to step up and demonstrate their support. We need all men to advocate for women in the workplace, on the home front, in politics, everywhere."

Here are five things men can do to support women in the call for equal pay, according to Torabi and other personal finance experts.

Tiffany Aliche, founder of The Budgetnista and author of the new book "Get Good With Money," said men should step us as mentors and coaches for their female colleagues in the workplace.

"I have had mentors and coaches who are men and some who are women and I’ve seen the differences in the two," said Aliche. "They’re equally as valuable, but I’ve learned different mindsets from them."

"There are a lot of things that my women mentors taught me that I would not have learned from men, but from men I've learned to step into my power differently," she said.

Sponsorships are also critical for men to take on in the workplace to level the playing field, according to Erin Lowry, author of "Broke Millennial Talks Money: Scripts, Stories and Advice to Navigate Awkward Financial Conversations."

MORE: More than 2 million women left the workforce in 2020. Why it matters and what happens next

"[Men should] advocate for women in their offices and be sponsors," added Lowry. "Mentorship is great, but a sponsor is the person who advocates for you behind closed doors, especially during discussions of raises, promotions and bonuses."

Aliche described sponsoring as "not just giving advice," but "making space for you that might not otherwise be made."

"A friend of mine used to work for a large financial organization and her mentor was tremendously helpful in pushing her career along, sharing with her what degree she should get, what extracurricular activities she should participate in," she explained as an example. "But also, too, he made sure right before he retired that he promoted her to the next level because he wasn’t sure what was going to happen when he left."

2. Be transparent about how much money you make.

Aliche said men should use their "positions of power" in the workforce to create more transparency and help close the pay gap.

"Share your salary with a female mentee at work," agreed Torabi. "Transparency is a must if we want to achieve pay parity."

Men taking paternity leave could help reduce the so-called motherhood penalty, where mothers are paid less in the workforce, according to Lowry.

"Men should take their fully offered and available paternity leave," she said. "This would help reduce and, hopefully, eliminate the rhetoric around 'you took three months off so it'll negatively impact your salary.'"

4. Speak up when women are not present.

"I think men underestimate how their word rings in places that women just are not privy to," said Aliche. "It cannot be underestimated how strong that is for men to speak highly of women when they are not present."

"To speak up and to speak highly of women when they are not present is really going to be helpful because people listen to their peers," she added. "If a man doesn't see a woman who is even at the same level as a peer, but he sees you [a man] as a peer, how you navigate your relationship with [your female colleague] and how you speak about her when she's not around is going to make a huge difference in how other men look at her."

Torabi echoed the call for men to advocate for female colleagues in meetings, even if the females are not present, saying, "Male support at work is essential."

Bias exists everywhere and gender bias can prevent an inclusive and fair work environment in the workplace, according to Aliche.

Unconscious bias from men may show in the assumption a female colleague does not want a certain job because of the hours or the travel involved, for example.

"We need men to listen and to absorb and observe, like, 'Maybe I have done those things. It doesn’t make me a bad person, it just means I have to be more conscious of my unconscious bias and how it may play out,'" said Aliche. "Men have to be open to recognizing that they may carry some unconscious bias."